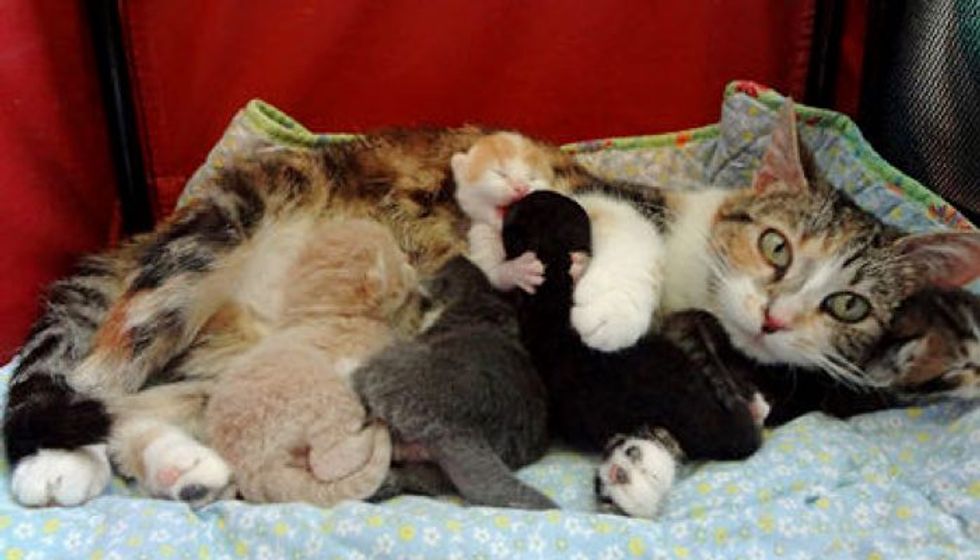 Love And Dedication Of A Stray Cat Mama

Being a mama is no easy work. Khaleesi the mama cat has definitely done her share of parenting when she was pregnant and rescued by Challenger's House.

Khaleesi the cat mama came to Challenger's House with a very pregnant belly and a ton of love.

Robyn Anderson shared the story with Love Meow: "On April 13, 2013, Khaleesi came to us; she'd shown up at a family’s house, and the vet told them that she was pregnant. They fell in love with her and wanted to keep her, but the other family pets weren’t having it so she came to us.

'Khaleesi' is the title of a character from Game of Thrones. Her kittens are named after dragons; Khaleesi is the Mother of Dragons.

In the evening of May 1, 2013, the dragons arrived! Khaleesi gave birth to four kittens of her own. She also adopted a small kitten who’d been born earlier in the day, and whose mother and siblings were lost in an accident. There’s a brown tabby girl (Ruth), white and orange girl (Ember), gray tuxie boy (Puff), black tuxie boy (Norbert, the orphan), and a buff boy (Scorch)."

Here mama is re-fueling herself while feeding her very hungry kittens.

Khaleesi also adopted an orphan kitten, a tux, who was in need of some motherly love.

She was very protective of her babies, keeping them safe and fed.

Even during a brief break, the kittens continued nursing. There was really no time to rest for the busy mama.

Little dragons got bigger but their appetite doubled.

The gray kitten paused from playing for a quick snack. Cat mama was always prepared to provide for any emergency nursing.

When mama thinks she can take a quick nap to recharge...

Her kitten reminds her it's time for another meal.

When one kitten starts nursing, another one comes along.

Soon, everyone is onboard.

The orphan kitten Khaleesi adopted wants in too!

Now everyone is happy!

All the kittens and Khaleesi the mama have all found their forever homes.