A man found six kittens abandoned at a parking lot and rushed to get them help. 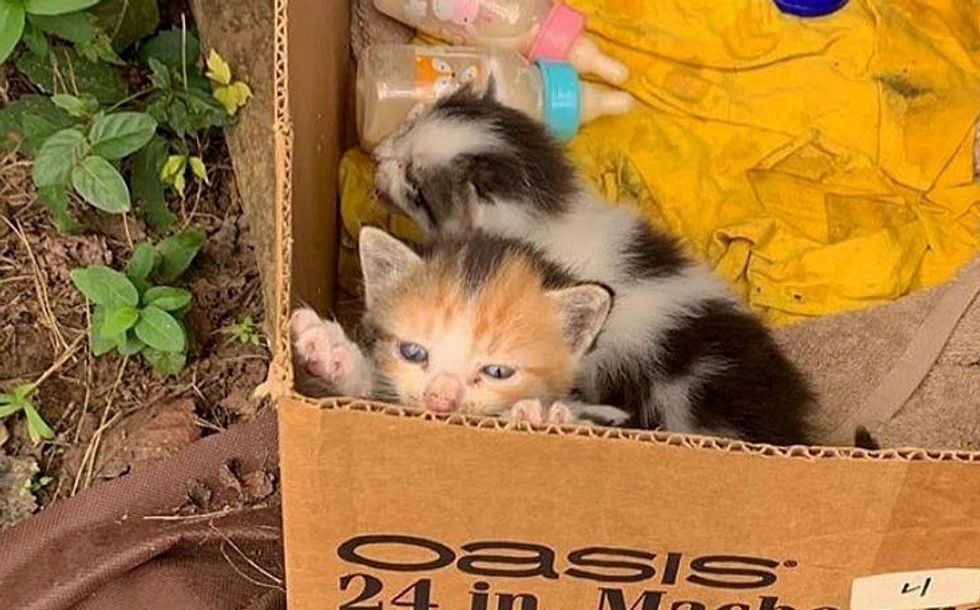 David from North Carolina was out caring for community cats in Burlington on Tuesday when he heard meowing coming from a retail business.

He followed the cries all the way to the back of a parking lot behind the store. Lo and behold, six kittens had been left behind in a box with infant bottles and a can of evaporated milk, which is not suitable for cats and kittens.

Some of the kittens were trying to climb out of the box near the busy parking lot. David spotted them just in time before any of them would have wandered off on their own. 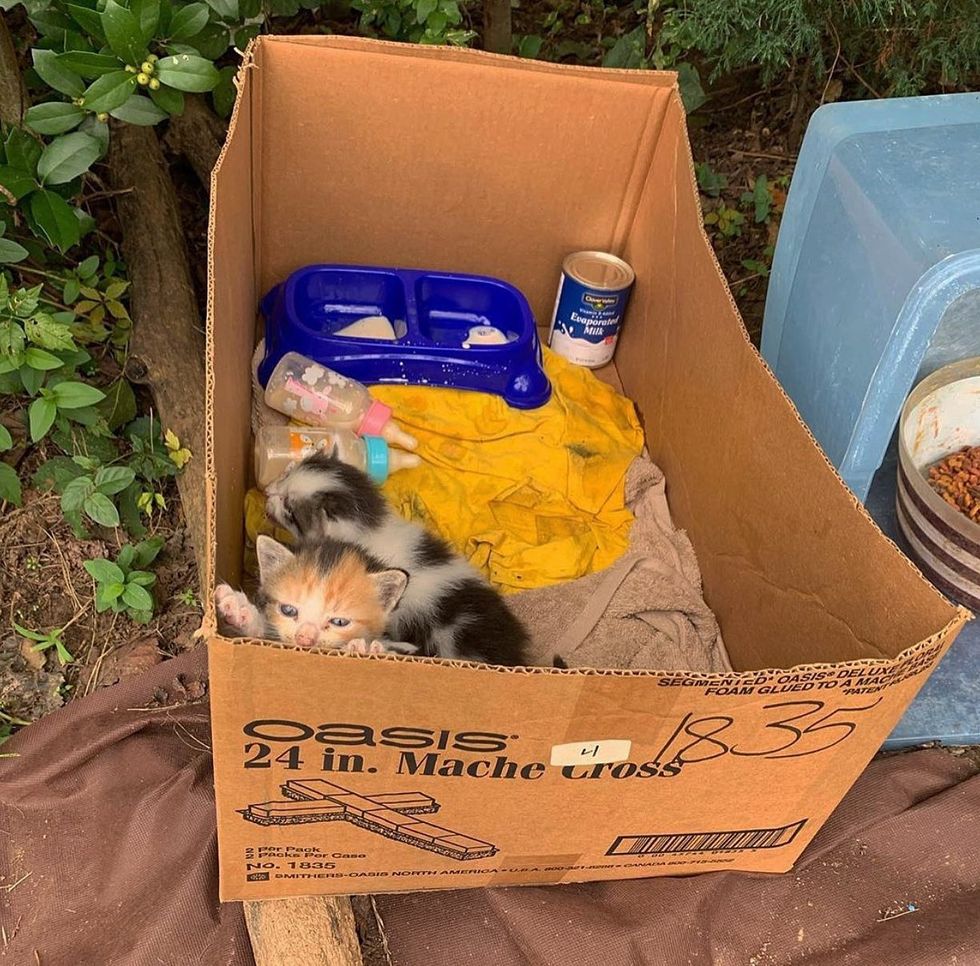 He reached out to Sparkle Cat Rescue, a local rescue group in Burlington, for help.

"Judging the condition of the box they were in and no ants around the milk, we think they had not been there long," Stephanie of Sparkle Cat Rescue told Love Meow. 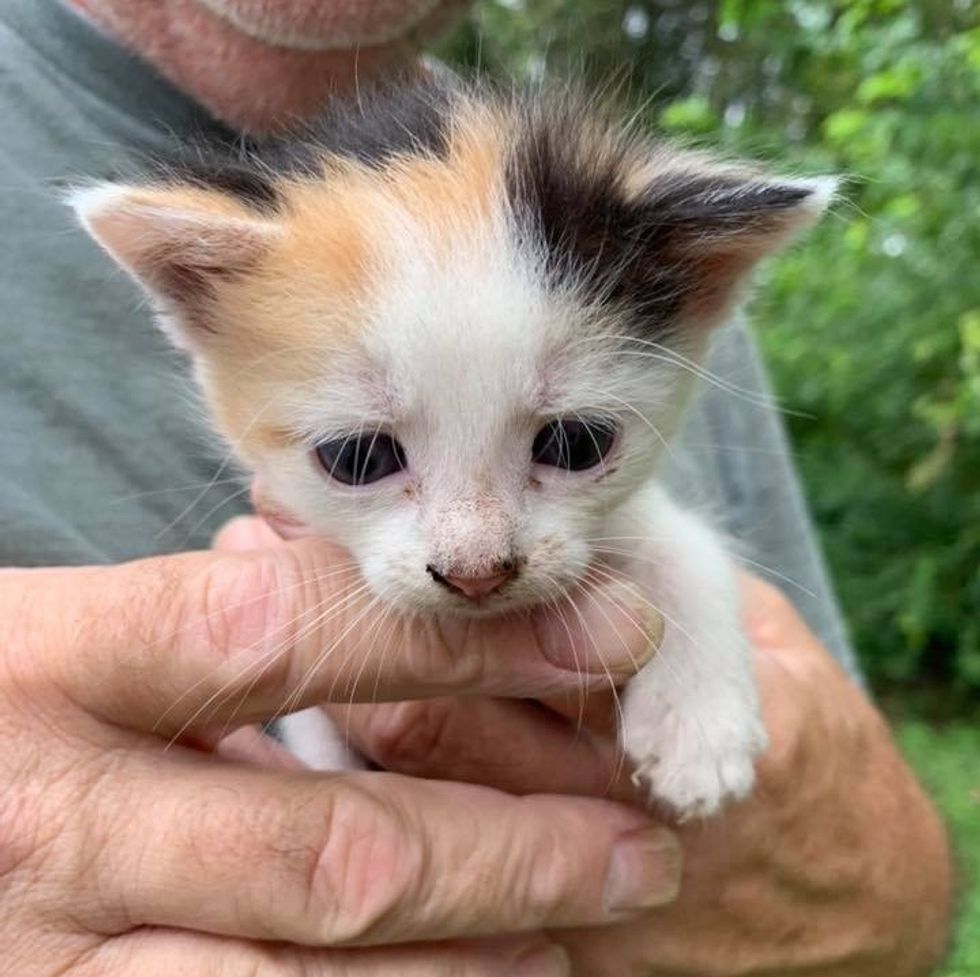 One of the kittens cuddles with her rescuerSparkle Cat Rescue

The kittens appeared to be healthy but very hungry.

After Stephanie got them comfortably in a clean container with soft bedding, she syringe-fed them one by one while searching for a foster volunteer to take on the round-the-clock bottle duties. 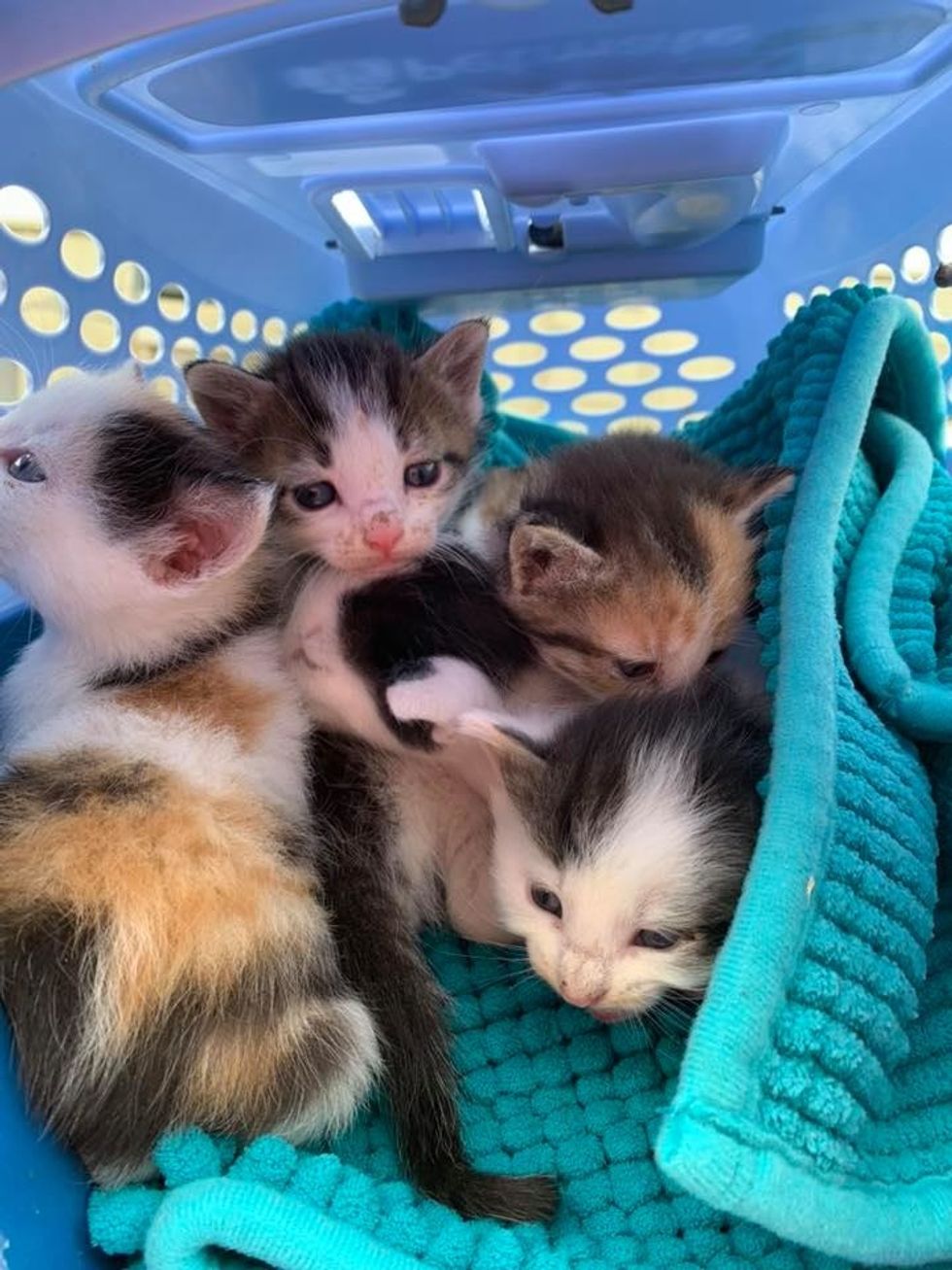 Sarah Kelly, a volunteer of the rescue, immediately stepped up to the task.

"We had to remove their fleas and dirt, and start treating upper respiratory infections we were worried about them developing," Sarah told Love Meow. "A few of them have weepy eyes and a sneeze, so we were extra cautious." 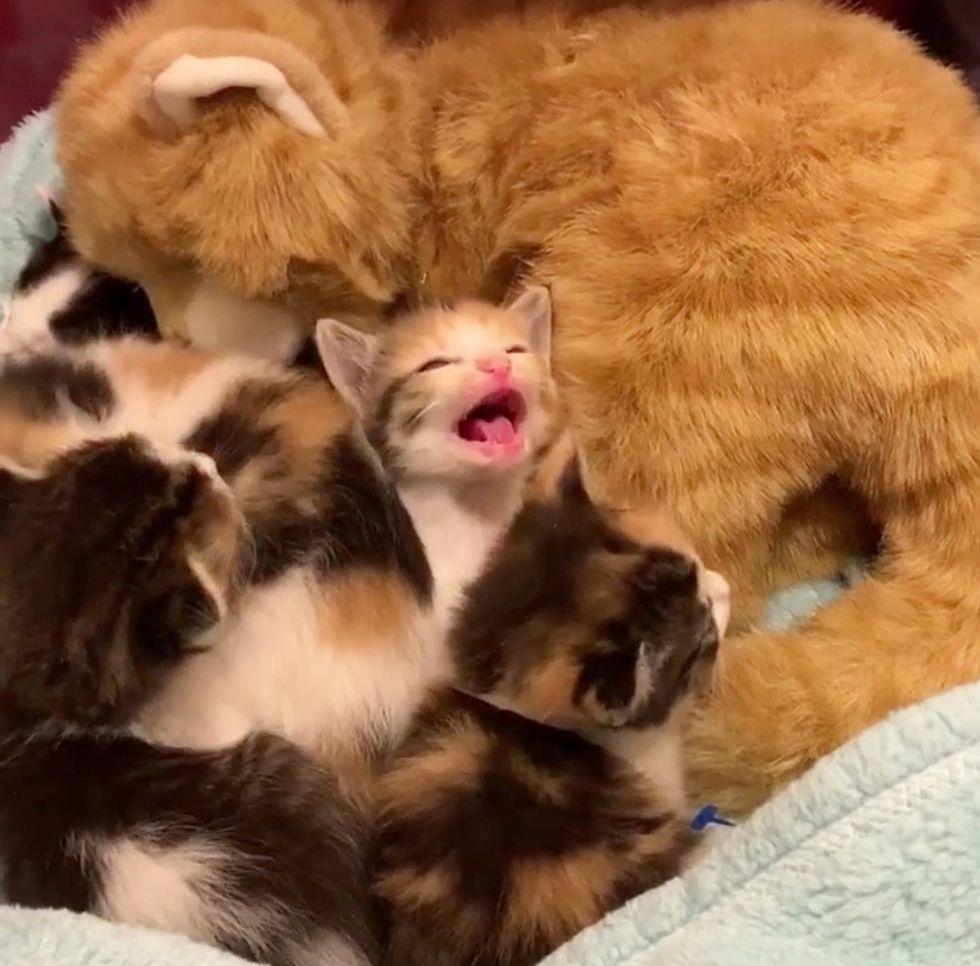 David could finally breathe a sigh of relief knowing the kittens are in good hands.

During the time he discovered the litter, he saw an adult cat nearby, who was covered in dirt and needed medical attention. He returned to the location with humane traps and is working to rescue the cat.

The kittens quickly settled into their new abode. They got a much-needed bath and a full belly. 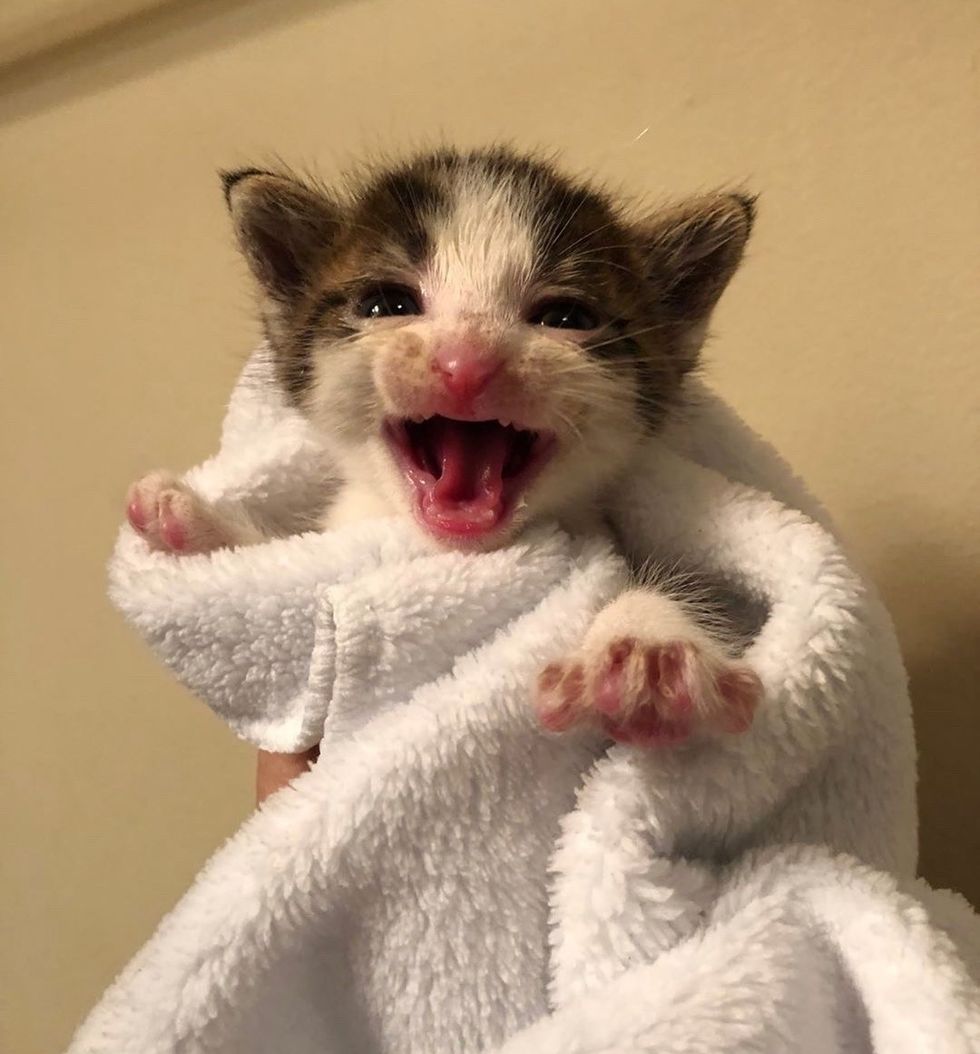 After a bath, the kitten is all cleaned up.Sarah Kelly @kellyfosterkittens

Sarah set them up in a comfortable foster room with plenty of soft things to knead on and toys to play with.

The kittens quickly got used to their life of luxury. They snuggled up together on their new blanket and fell asleep in a purr pile. 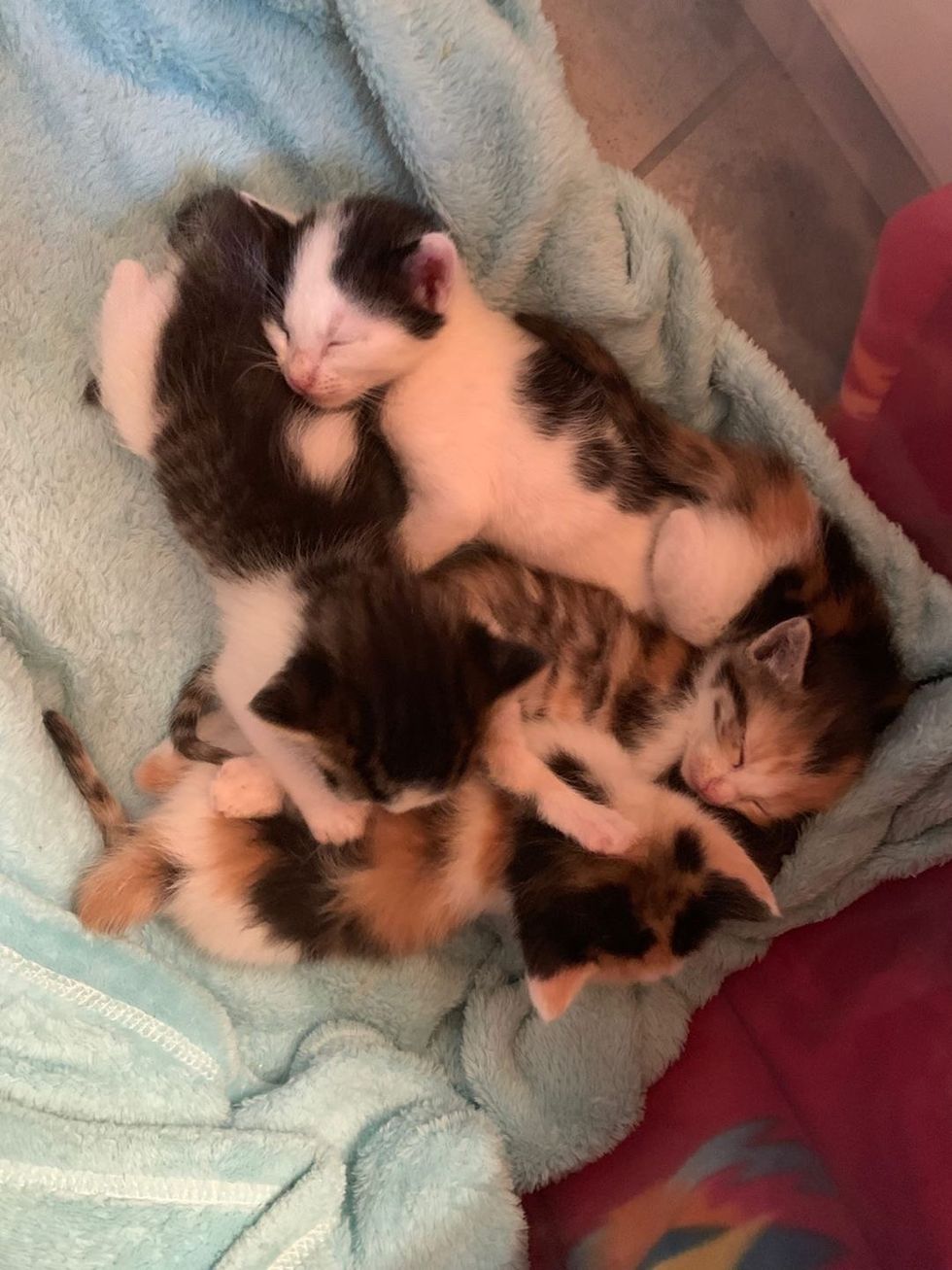 All six kittens napping in a purr pile.Sarah Kelly @kellyfosterkittens

"They are doing well currently and made great weight gains overnight and throughout the day. We look forward to getting to know their personalities and watch them grow," Sarah told Love Meow.

Thanks to their rescuer, the kittens are thriving in their foster home. 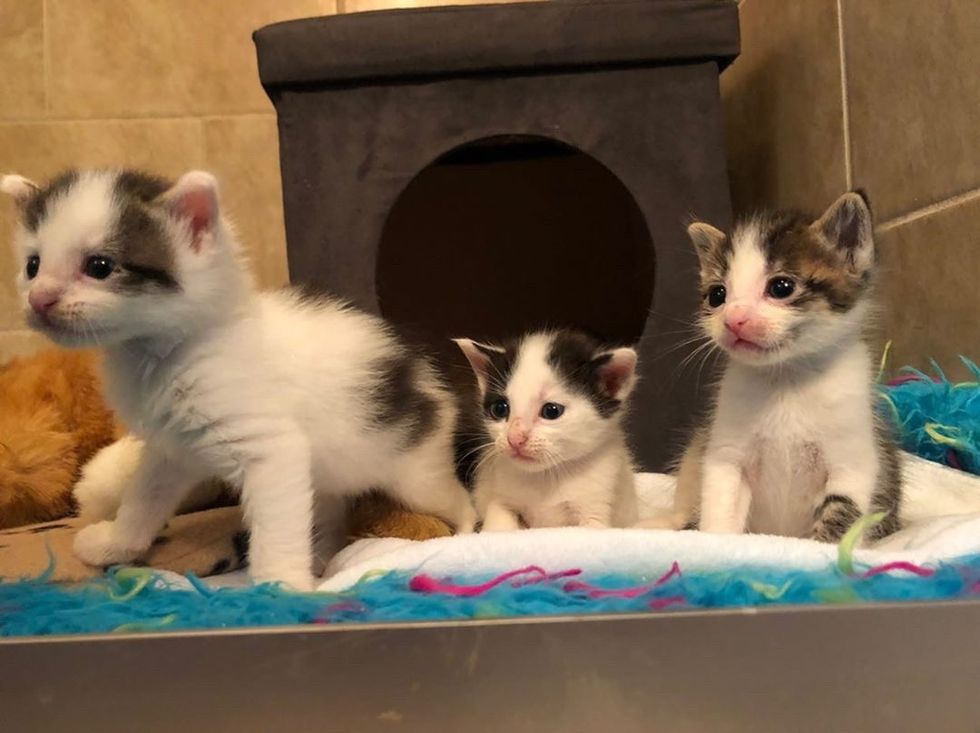 "They won't repeat the cycle because they will be vetted, spayed/neutered and adopted to loving homes," Stephanie said.

Sarah named the kittens after ice cream flavors as they are as sweet as can be. Meet Vanilla, Cookies and Cream, Rocky Road, Chocolate Chip, Neapolitan, and Caramel. 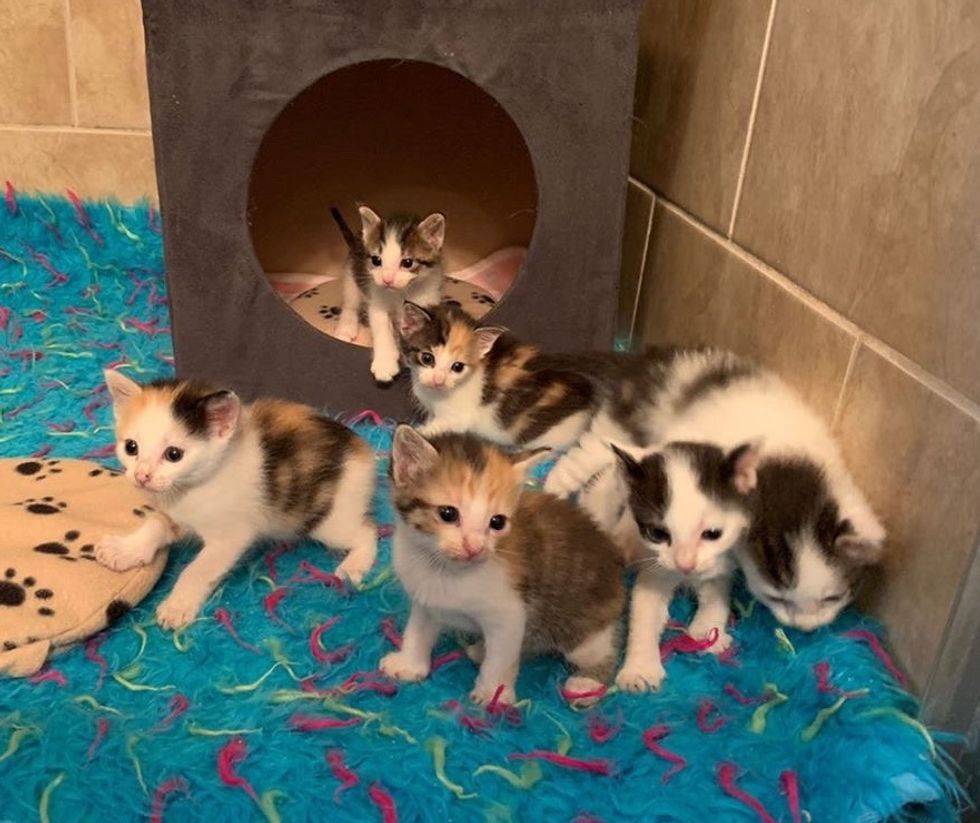