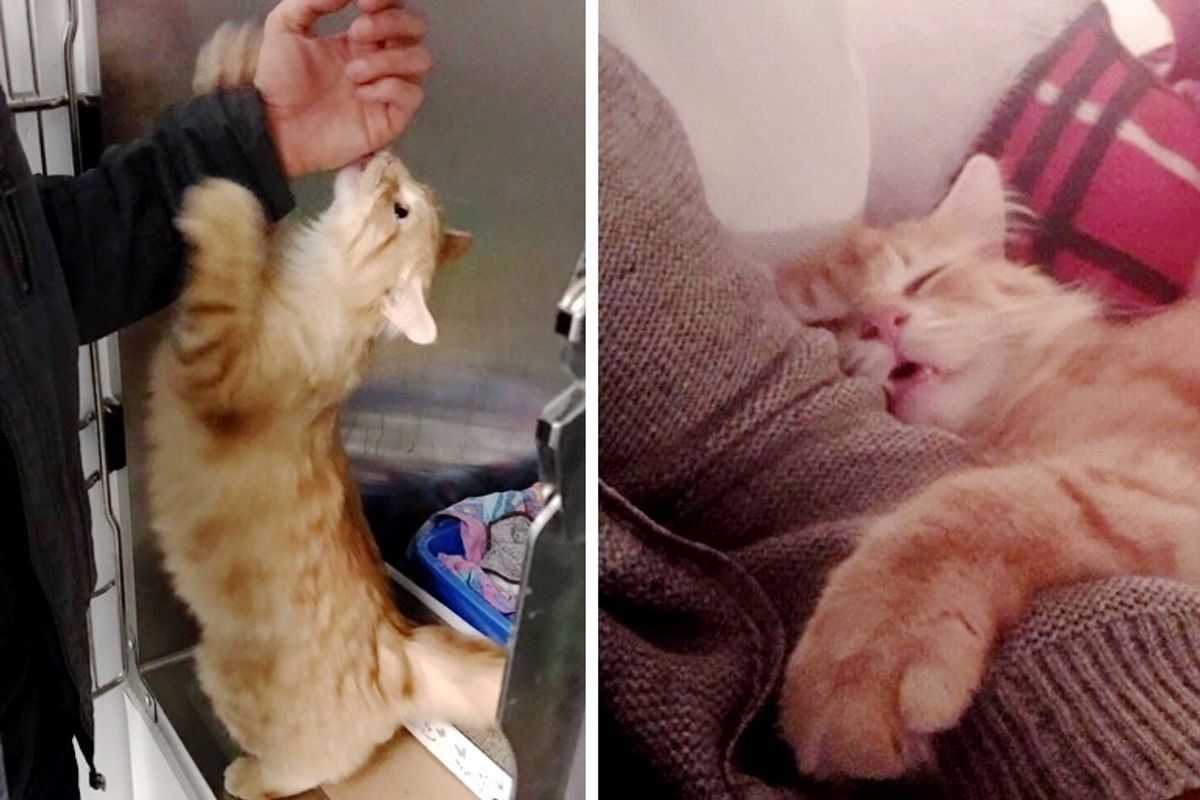 A kitten was very shy and timid when he was rescued from a farm. A man took him home to foster, and he quickly came around.

Simba the kitten was found along with two cat moms and other kittens. They were sick and desperately needed medical attention. Michele, an animal rescuer from Quebec City (Canada), saved them before it was too late.

After a vet visit, the feline family was diagnosed with a list of health issues, including ringworm, a skin infection. Michele took it upon herself to care for them and help them recover.

After seven long weeks of dedication, all the cats and kittens were nursed back to health. When it came time to find them forever homes it became quite a challenge, especially for the most fearful kitten, Simba.

Michele reached out to the rescue community for help. Chatons Orphelins Montréal immediately responded and took the shy 8-month-old kitten into their care.

He was very timid when he first arrived, spending most of his time in his box. After his neuter surgery, he was sitting in his kennel at the veterinary hospital, waiting for someone to take him home.

Benoit, a volunteer of the rescue, stepped up to help. He came to pick up Simba, expecting to see a shy cat. But as soon as he opened the kennel door, the little guy got up and went straight to his human friend.

He grabbed Benoit's arm with both of his paws and started giving him kisses. "He couldn't wait to leave his cage to go home with his foster dad," Chatons Orphelins Montréal shared with Love Meow.

The shy kitty they met at arrival, began to come out of his shell when Benoit took him out of the hospital while en route to his comfortable home.

That night, Simba stayed close to his foster dad, curling up next him while holding hands. "He put his paw on his foster dad to make sure that he was there with him while he was sleeping," Celine Crom of the rescue told Love Meow.

The next day, Simba decided to cuddle the minute his foster dad sat down. If Benoit was on the computer, the kitty was right there, holding him with his paws.

The ginger boy follows his human everywhere around the house. Despite having many cat beds, Simba only sleeps with his foster dad by his side.

"He adapted to his new life quickly. After a few days, he became the king of the house," Celine added.

"Simba wants to be close to his human at all times. It gives him comfort and security. He always puts his paw on his arm because it reassures him."

The little guy is eager to be loved. He has grown so much confidence and purrs like a little machine as soon as you pet him.

"Simba discovered what life would be like with good humans, and he loved it. And now he's blossoming every day."

Related story: Cat Tries to Hide From Everyone Until He Meets 3 Kittens Who Turn His Life Around