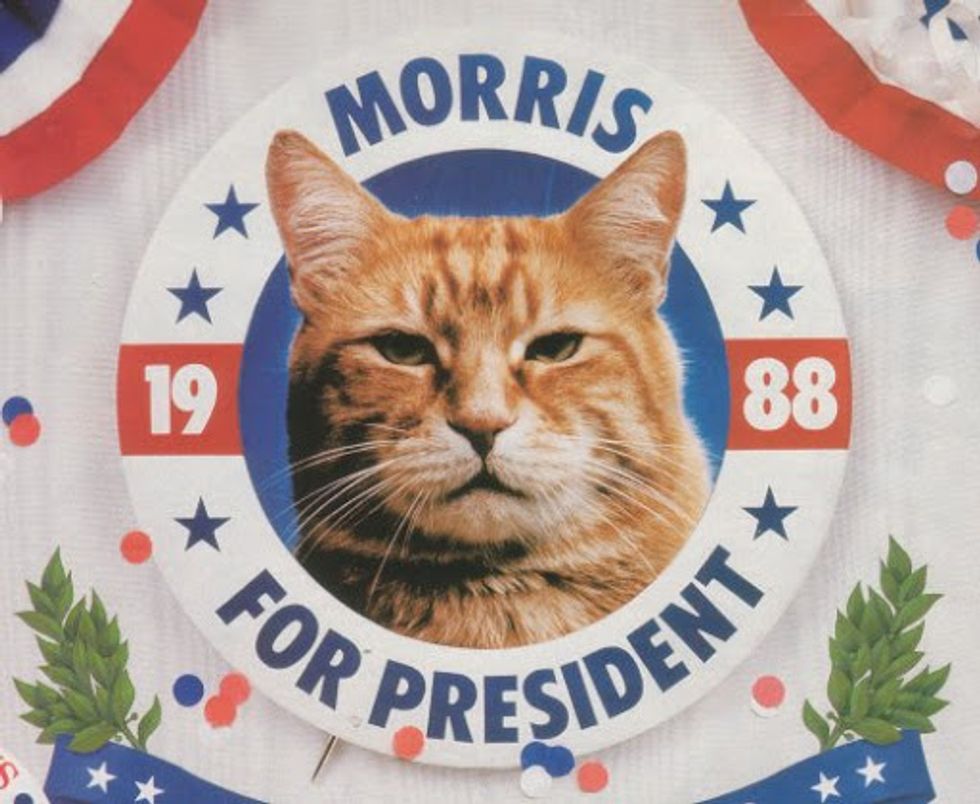 There is one cat that ran for president of the United States. His name is Morris.

Morris is a famous celebrity cat and the spokescat for 9Lives. You probably have seen him on commercials and TV shows, but many do not know that Morris came from a very humble background.

The first Morris spent his early life in the Hinsdale Humane Society animal Shelter in Illinois. Bob Martwick adopted Morris and realized his raw animal talent soon after he brought him home.

Morris' star quality shone when he was brought to try out in an audition. He did a marvelous job except no one could understand what he was saying in front of the camera. So they decided to look for a human voice for Morris.

It was not easy to find the right human voice. After all, those were some big shoes to fill. They chose John Erwin to be the voice actor whose vocalizations matched Morris' character purr-fectly.

When Morris campaigned for presidency in 1988, they did an official news conference to announce that Morris the Cat was running for president. This news attracted more than 25 news reporters that swamped to the conference to get a glimpse of the first feline presidential candidate.

The introduction by Eleanor Mondale was truly amazing:

"May I introduce a candidate with the quiet demeanor of a Coolidge, the animal magnetism of a Kennedy, and with the honesty of a Lincoln, a candidate who may shed but will never shred, a candidate who stands four square behind the values of life, liberty and the pursuit of din-din."

They even conducted a poll by the Opinion Research Corporation to find out Morris' popularity status. More than 70 percent of the public knew who Morris was. He had greater name recognition that year than anyone else in that field except for George Bush according to Boca Raton News.

"One 'question' Mondale read dealt with Morris' position on the Iran-Contra debacle. His 'answer' read by his spokeswoman: 'Any cat would have smelled a rat."

Unfortunately, despite his popularity and support from the public, Morris lost his bids in the 1988 presidency. However, his legacy continued. Morris ran for president again in 1992. Though he was not elected that year, his efforts and determination were truly commendable.

Morris the Cat was on Music City Tonight for his 25th Anniversary: