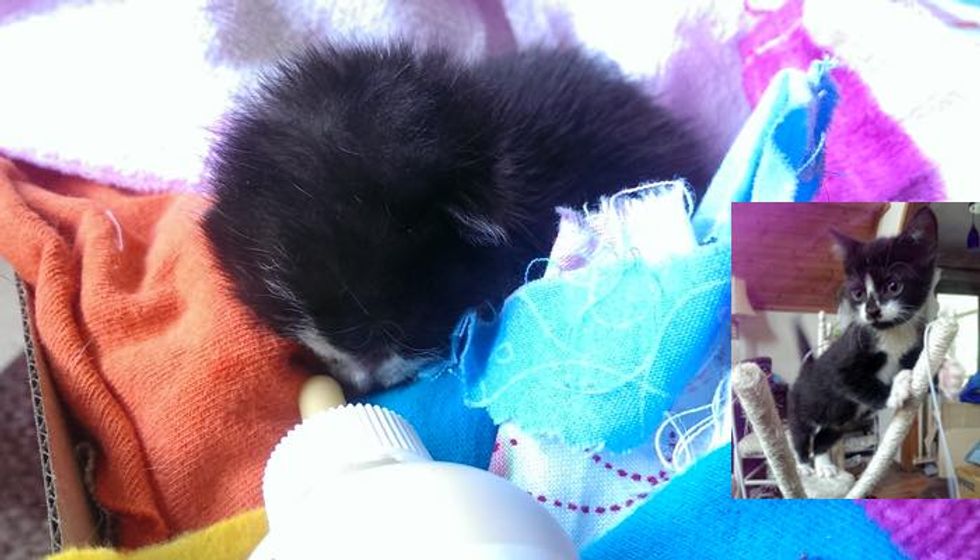 She was just a few days old when they found her on the driveway along with her brother. Their cat mother was nowhere to be found. The cold little kittens weren't ready to give up...

A couple of hours after Link was found on the driveway.

Emmy brought the little babies into her home, trying everything she could to keep them warm. Link was so tiny that her eyes were still closed.

"They were left without being able to eat for so long," Emmy told Love Meow. "They weren't able to regulate their temperature on their own, so they got too cold."

She used towels and socks to make a warm bed for the kittens and began to bottle feed them around the clock.

"I bottle-fed them every two hours. I also had to stimulate them to go to the bathroom, as they couldn't do that on their own. They were only a couple days old when we found them," Emmy added.

When she found out that Link's tail was broken, she rushed the little tux to the emergency vet. "(The vet) was amazing. She glued the tail back together, told me that Link was young enough it wouldn't matter, and gave me antibiotic eye ointment to put on the wound. She waived the (exam) fee and only charged me for the medicine. She also made sure both of them were healthy and weighed them for me."

Link got a full belly after dinner.

"They hit all of their milestones at least a week late. They didn't start eating solid food until 7 weeks. I had to feed it to them on my fingers, because they couldn't figure out how to take it from a dish. Hagrid (Link's brother) is still drinking from a bottle, but Link has been drinking from a bowl for a couple of weeks."

"My aunt has adopted Hagrid, but I'm keeping Link. They are both very happy. Hagrid has a bunch of other animals to play with, and Link and Zelda (my one year old cat) have been very close since I first brought the kittens home."

Zelda has become Link's new mom. They are inseparable. "They cuddle together, play together, and eat together. The only thing they don't do together is use the litter box.

Link sleeps with me every night, and never stops purring. She's even gotten Zelda to cuddle more with me, since Zelda doesn't like to sleep far from her."

Link is growing so fast. She tells Emmy how happy she is every day by purrs, play time and endless snuggles.

"I'm really glad I found her, and I wouldn't trade my sleepless nights for anything. I am so proud of how she's turned out."

14-year-old Cat So Happy to Be Doted on Again, He Turns into a 'Velcro Cat'