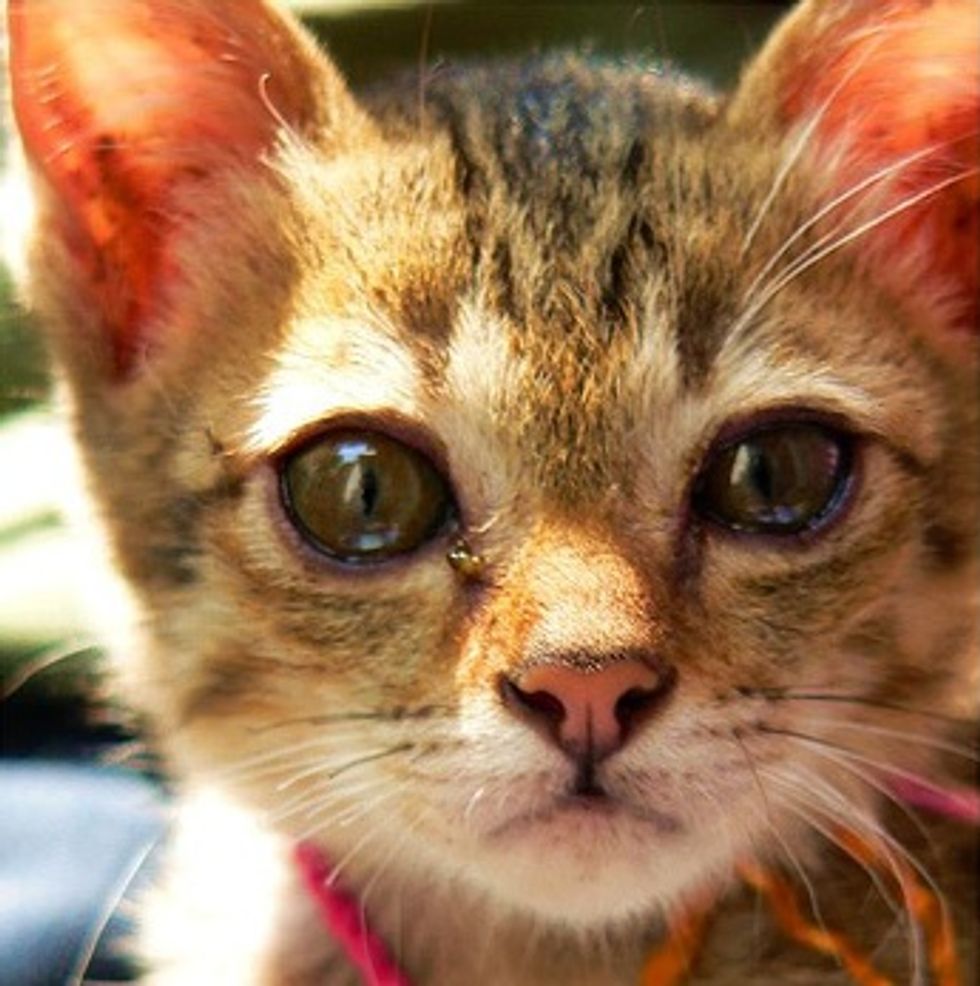 My Cat was a Special Gift

Little Sanshiro was rescued by Araleya by the Mae Klong river in Thailand. There was a lot of seafood sold there, but he was starving when she discovered him. The little kitten was abandoned and left alone. He was very thin and small.

"When he found me, he rubbed his head against my legs and didn't let me go." It was love at first sight, Araleya decided to adopt Sanshiro without hesitation.

"He acted as if he gave his life to me... he followed me like my own shadow."

"I think Sanshiro was a special gift." Araleya spotted him trying to drink milk from her half Labrador and half Golden Retriever dog "Poon" multiple times, but initially she thought he just missed her own mother. However, the little tabby kitten kept suckling on her canine surrogate mother for quite a while until Araleya finally realized that Poon was actually nursing the little kitten with her own milk, even though she had never mated or had had any puppies.

"It was a miracle that my dog, not pregnant nor giving birth (was able to produce) milk for a young cat. She cleaned Sanshiro with love and care... They often slep together and often made happy conversations. I just think that was a miracle of love indeed."

Poon always thought she was the mother of every pet in Araleya's house. She had raised several cats and now for the first time she was nursing a kitten with her own milk.

As Sanshiro grew bigger, he began his adventure by exploring the world around him with loads of curiosity and joyfulness. He would climb up the trees in Araleya's garden and survey the surroundings with his big beautiful eyes.

"We were together travelling on the weekends. Sanshiro was used to traveling by car, though at the beginning he was a bit naughty, walking here and there in the car, but soon he settled down." He loved having snacks in the car, especially if it was fish.

This is the last picture Araleya took of Sanshiro when he was still well. Sanshiro fell into an unexpected illness when he was approaching one year of age. He was so ill that he had to stay at a clinic for treatment.

"He was abandoned at a very young age when I found him at the beach. This was so sensitive for him not seeing me around. I even thought maybe I should leave my clothes with him at the clinic, so he would think I was there with him."

"I have no doubt that he had this unconditional love for me. I could see it from his eyes, his loyalty and his dedication... He picked me to be his owner that day at the beach... It was like our destiny."

Sanshiro past away on August 6, 2007, only a few days from reaching one year old.

"He was the first and only pet that I ever loved so much. Life is not the same without him..."

This is a tribute for Sanshiro.