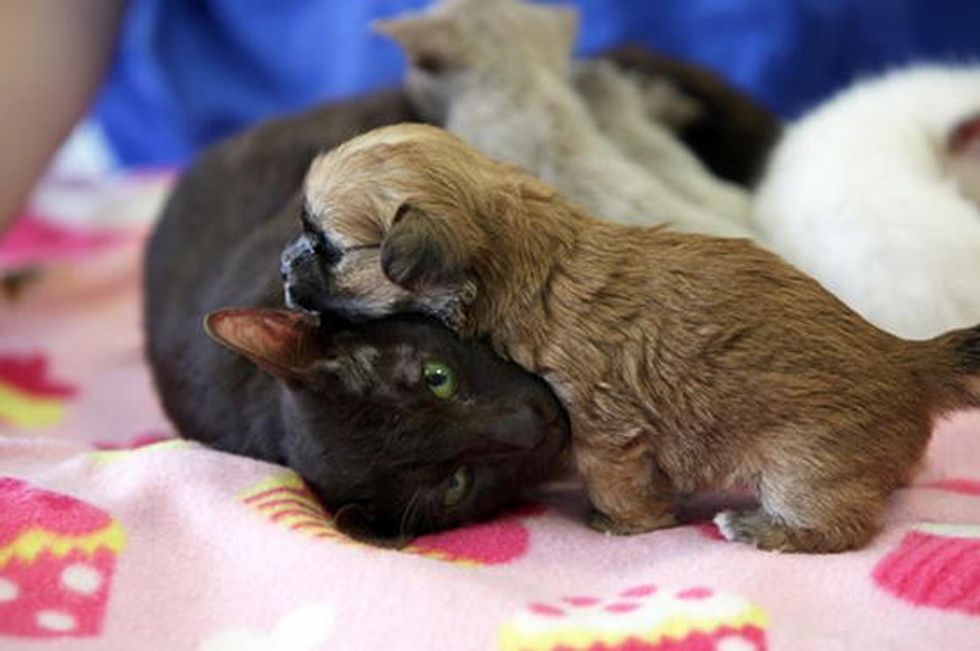 Coco the Siamese cat momma welcomed a tiny one week old Shih Tzu puppy Hope into her family. The puppy was rejected by her mother, but later adopted by Coco who lets the tiny pup nurse and nap with her own kittens.

Coco's kittens and Hope the pup were born on the same day. Coco's maternal instinct kicked in, when she saw Hope. It was as if she knew that the pup was abandoned and needed some motherly love.

They weren't sure initially if Coco would accept the newborn puppy, but she took to the little one right away according to Paula Ball.

"We named the puppy Hope because she managed to survive in the birth channel for five hours and despite being rejected she is thriving under Coco's care."

"She is the same size as the kittens at the moment and gets fed and washed just like them."

"We are delighted that Hope has been adopted in this way and she will no doubt feel warm and safe with her new family," said Lizzie Goldstraw from White Cross Vets in West Derby, where the furry family is treated.

"It's quite unusual for a cat to take a puppy on as its own but it helped that they were born on the same day and that Paula acted so quickly to introduce the puppy."

"It's a real miracle and very heart-warming to see them all snuggled up together," Paula said.

Coco the cat took in the little pup straight away, nursing her and letting her snuggle with her kittens