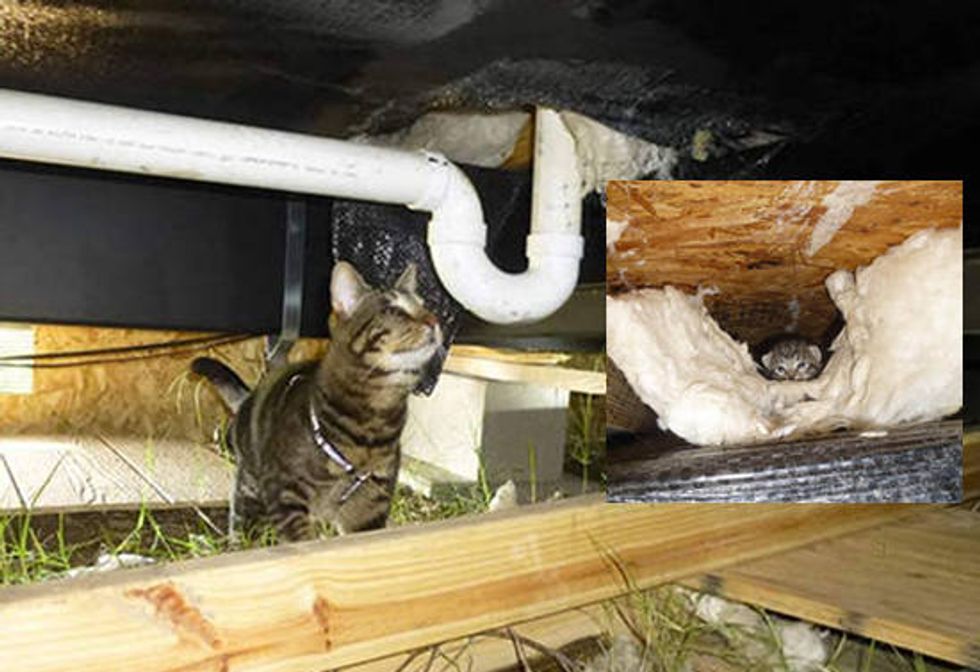 Spirit the blind cat uses his exploring skills to help rescuers search and rescue 4 tiny kittens at a construction site. This is a remarkable story.

Despite his difficult beginning that took away his eye sight, Spirit has forgiven his past and now lives his best life and goes out to help others.

"Late in the afternoon on Monday, April 14, we were notified about a feral cat that had been trapped at a building Construction site the day before, at around 11 am Sunday. The person who trapped the cat suspected that she was pregnant, but was not sure until the veterinarian informed her Monday afternoon that the cat had already given birth. The chances of finding the kittens -- or being alive -- after so much time had lapsed was very dismal. But we HAD to TRY! The temperatures were dropping, and our low for the night would be in the 30's. We did not have any idea of what we might encounter, but we brought our Most Valuable Asset -- a little blind kitty with a powerful spirit, who is absolutely amazing! Spirit is an excellent explorer, and will go above and beyond to help anyone in need. We needed a miracle!

Once we arrived at the Construction site, and were led to a rear access point under a trailer, and we quickly discovered that the space underneath this trailer was dark, very muddy and eerie, with an extremely low (height) clearance. We would need to crawl on our elbows and belly in order to maneuver under the trailer. The area was so daunting, we did not feel safe going into an unknown dark, cold, wet area, with only one entry/exit point. But, we needed to search for the hidden (abandoned) kittens, because time was of the essence! So, we called a dear friend who lived close by, and asked if she would be willing to venture into the unknown with us, under the trailer. To our Surprise, she agreed!!!

The entire time that we were searching under the trailer, Spirit was off lead. This was necessary for a number of reasons -- so that his leash would not get tangled up in the debris, or metal supports, and also because he needed the freedom and ability to thoroughly investigate the lowest areas, where the clearance was literally about 6-8 inches high -- too low for a person to reach on their own. We relied upon Spirit's ability to notify & alert us, and our boy did not disappoint!"

Edit: According to Spirit's facebook page, "Their (feral) mama cat had been spayed, then recovered at a friends house, and was relocated outside at a workers home." The stress of surgery and nursing might be too much for the mama cat to handle, so they brought in CC the cat to help raise the kittens. And CC is fantastic!

This is the construction site trailer, where the feral mama kitty had been seen taking refuge under.

They believed the missing kittens were hidden under the trailer.

They sent in extra help for Spirit to look for the kittens. They were working as a team.

He went exploring, trying to pick up any scents or sounds.

It took a little exploring around, but Spirit spotted something up there.

They took a closer look... It was the kittens!

There were 4 kittens in total.

They took the kittens home to foster. Here Uncle Spirit is checking on the little ones.

The 4 rescue kittens now have a surrogate mama, CC, who is nursing and caring for them along with her 5 kittens.

Photos via Spirit A Blind Cat.