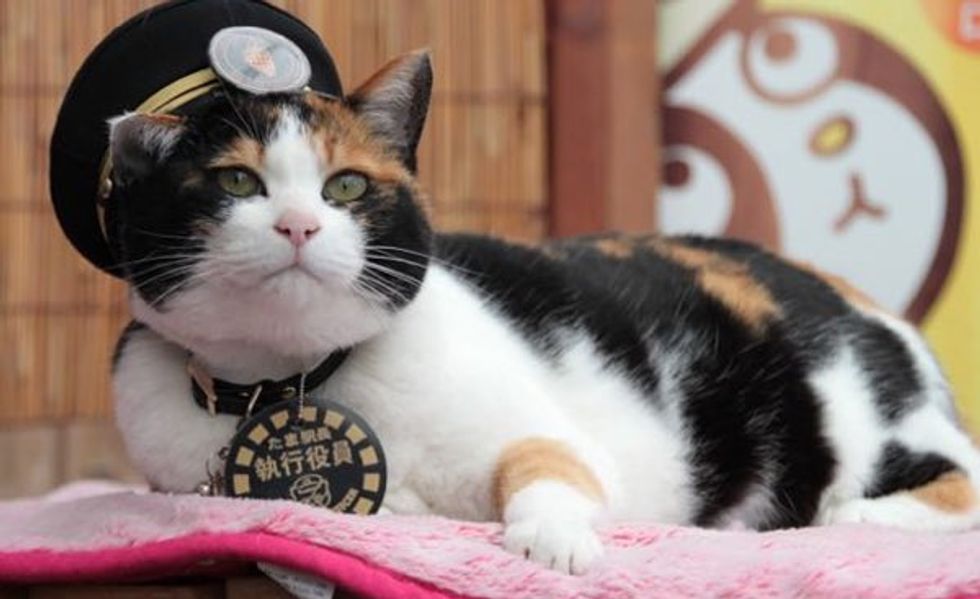 The famous railway station Calico cat Tama is no longer dubbed as the "Super Station Master." The little railway station sensation who single-handedly brought in 10 million dollars in revenue and turned over the economy for the town of Kishikawa, has been promoted to corporate executive of the Wakayama Electric Railway Co..

Tama was discovered by the Wakayama Railway back in 2007. They decided to build her a nesting place at the station and gave her a title as a station master. Soon the story spread across Japan, attracted hundreds of thousands of tourists traveling hours to the town of Kishikawa just to get a few pictures with Tama.

Merchandises of the little Super Station Master quickly became available. Tama was featured in virtually every type of merchandise. Her fame grew as the town became more prosperous. Even during the worst economic times, the town of Kishikawa was doing exceptionally well thanks to the Calico station master.

Tama is the first cat that has ever been officially appointed as an executive in the world. Though she has advanced up her corporate ladder, Tama will continue doing the same job as a station master.

Tama started her railway station career back in 2007. The following year she was promoted to the Super Station Master. In three years, her position swiftly advanced to the executive level.

The company realized that their recent success was largely a result of Tama's contribution to the railway station. They wanted to honor her for her incredible accomplishments by giving her the highest position in her field.

In order to make the Kishikawa station even more appealing to tourists, the company has decided to renovate the station into the shape of cat's face this coming summer.