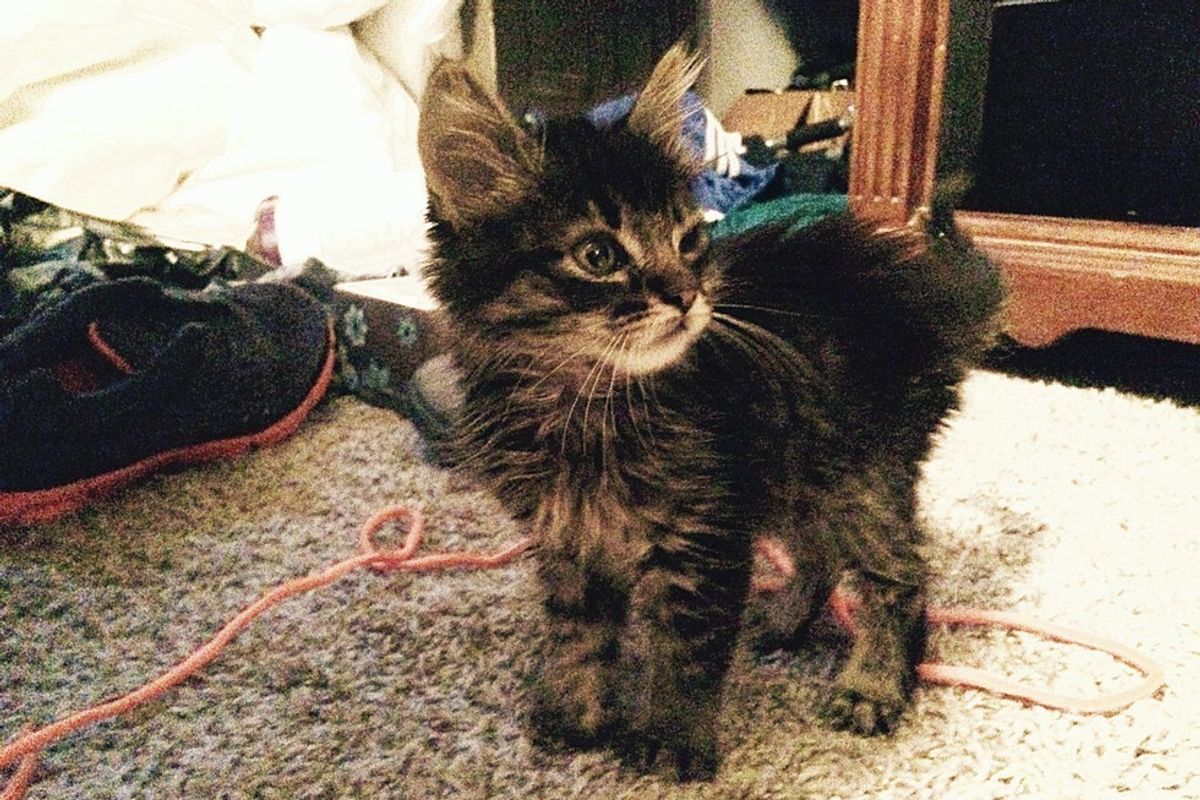 A stray kitten was found in a parking lot with nothing to eat but bugs. A young woman took him home and nursed him back to health.

"Several days ago, I found and rescued an emaciated, half dead, starving ball of hair curled up all alone in a parking lot with nothing to eat but bugs," reddit user angrybroad said.

She picked him up and took him home.

"I really think he only ate bugs due to desperation, hunger, and the subpar hunting skills of a 5-6 week old kitten. He had been eating June bugs. I only know because I got him through the 'expulsion' process, and apparently kitties don't digest beetle shells."

With love, proper food, and a warm place to sleep, the kitten quickly came around.

"He turned out to be the sweetest, most lovable bug-eating ball of hair I've ever known, and is also slowly becoming the most spoiled."

Kitty can't get enough of his new food.

"I've been pampering him with cat food with stuff like whitefish, whole tiny shrimp, and tilapia and he loves it, and is already becoming a bit of a diva in deciding whether or not a new food is up to his standards.

"He probably feels beetles are beneath him now." (reddit)

He came out of his shell and discovered his new found energy.

"He has a bunch of toys that he frequently attacks, he really likes reaching under things like doors and frantically swatting at nothing, discovering 'caves' to hide in, testing just how rough he can be with our hands and feet, etc."

The kitty is incredibly happy and playful now.

"He's just now really getting into truly normal kitten behavior, since he was too weak and probably traumatized at first to focus on anything but eating and sleeping.

"Now that he's feeling so much better, he is a precocious little thing."

"He still sleeps a lot but when he's up he's showing us just how much better he feels."

The little fur buddy is thriving, and getting bigger, stronger, and fluffier every day!

"He looks like he belongs in a forest, because of his fur pattern, so I've been trying to come up with an 'earthy' name for him," she said.

Now the kitty no longer needs to worry about food or having a safe place to sleep. He's loving his new home and has become the pest controller, guarding his forever humans from bugs.