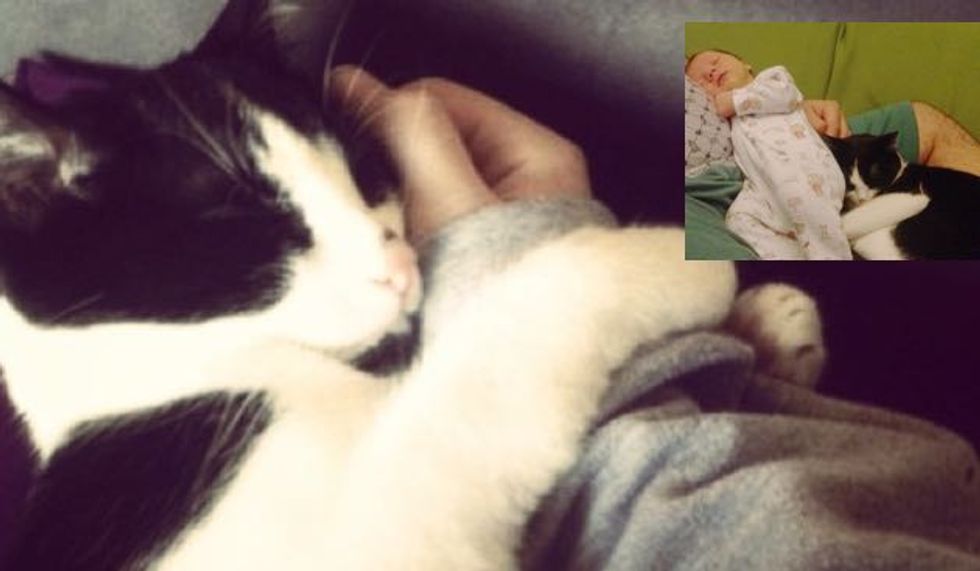 When Alyssa was 8 weeks pregnant with her first child, she came across a tiny stray kitten without a mother. Alyssa couldn't leave him there, so she took him home. They named him Kitten Face who never left her side throughout her pregnancy. "This beautiful boy became my bestest friend in the whole world," she wrote.

"When I was 8 weeks pregnant with our first we found and took in a stray kitten," Alyssa wrote via imgur. "He was nervous at first but soon settled in."

"This is what I woke up to most mornings."

"As my bump grew, he always cuddled it and became very protective of me and my unborn son."

"When I became bed bound due to pregnancy complications he never left my side.... This beautiful boy became my bestest friend in the whole world... When I went into labour, he kept a paw on me and licked my tummy through every contraction."

"I had to have an emergency c-section after 2 days of labor and ended up having to stay in hospital for a week." This is what he did when she returned home.

"He immediately fell in love with my son and wouldn't leave his side." Kitten Face kept Alyssa and her baby company while she was recovering from surgery.

"Whenever I couldn't find him, he would almost always be by the baby's cot."

"He was over the moon when our son start 'sneaking' him food from his highchair."