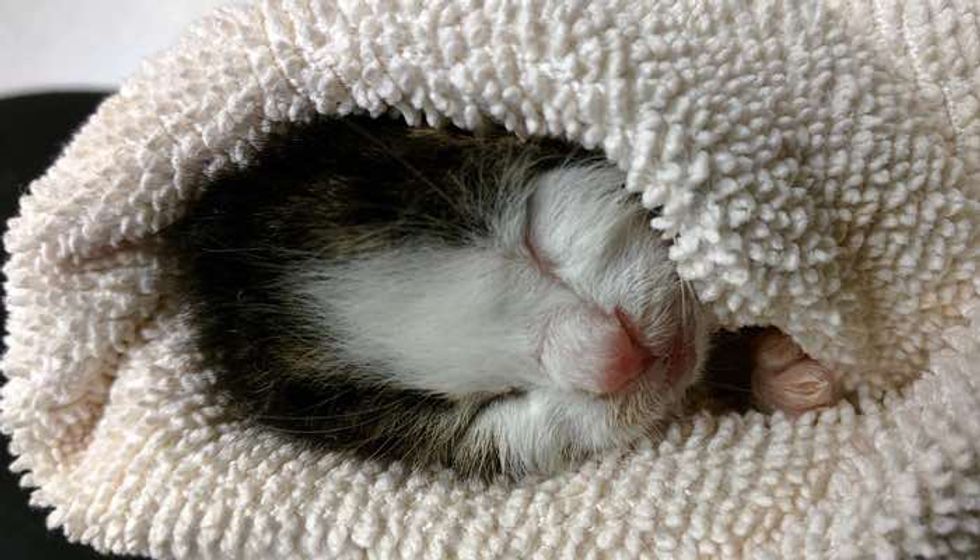 Tiny Rescue Kitten Peanut with Fighting Spirit Like a Lion

This tiny orphan kitten with an injured leg was so small when found that they named him Peanut. He was rescued by the employees of a company with many animal lovers.

"I work as a receptionist for a company. Around work we get a lot of strays. Here's a story of one of the strays," imgur user nOoLiScOoL shares the story.

One of the employees brought an injured kitten into their office. He was found with a deep gash on one of his hind legs in the middle of the street. "After speaking with co-workers we were able to contact an employee who helps with injured strays," he says.

This kind person took the kitty to the vet's to have him checked out. "Turns out its bowels were punctured and they couldn't operate because he was only a day or two old. They said it was probably a bird or raccoon that caused his injuries."

The kind employee took the kitten home to nurse. A day after the rescue, the little fur buddy had regained some energy.

This picture was taken a day later. Poor thing was on pain killers

A week after the rescue, the kitten came back to the office with his caretaker.

Peanut has gained an ounce and his leg is healing. He may have to live with special needs, but he's never stopped improving. They plan to help this little guy to live out his best life.

Peanut walking on his own

"We're all hopeful that this cute little peanut is a fighter. The employee is going to do her best at taking care of him."

More info: imgur. Thanks to nOoLiScOoL.

His appetite is getting bigger by the day.

Peanut is reunited with his human friends at the office.

This is me and Peanut! Reunited after a week.

"Rawr!" He has a fighting spirit like a lion!