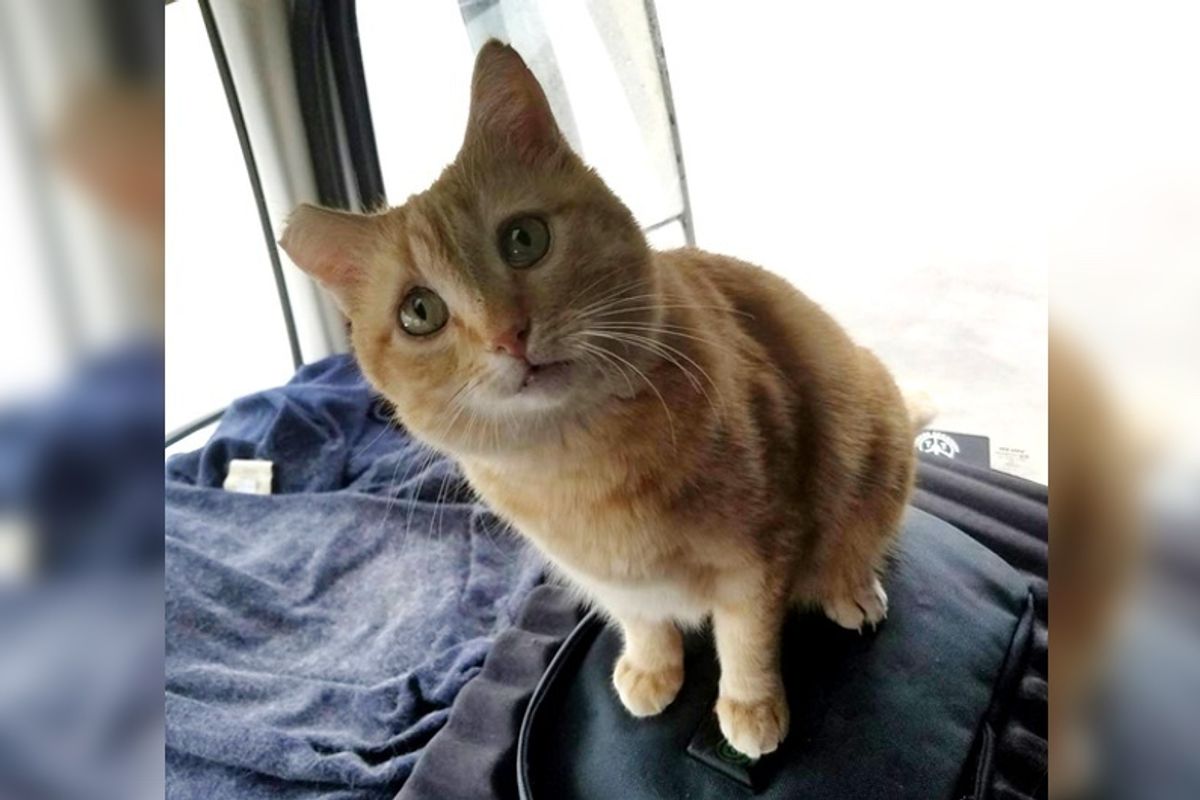 Trucker Takes a Chance on Rescued Cat and the Ginger Becomes His Purrfect Co-pilot..

A ginger cat named Percy came into a truck driver's life and became his most purrfect companion. He looked at his human with those eyes of many stories and stayed by his side ever since. 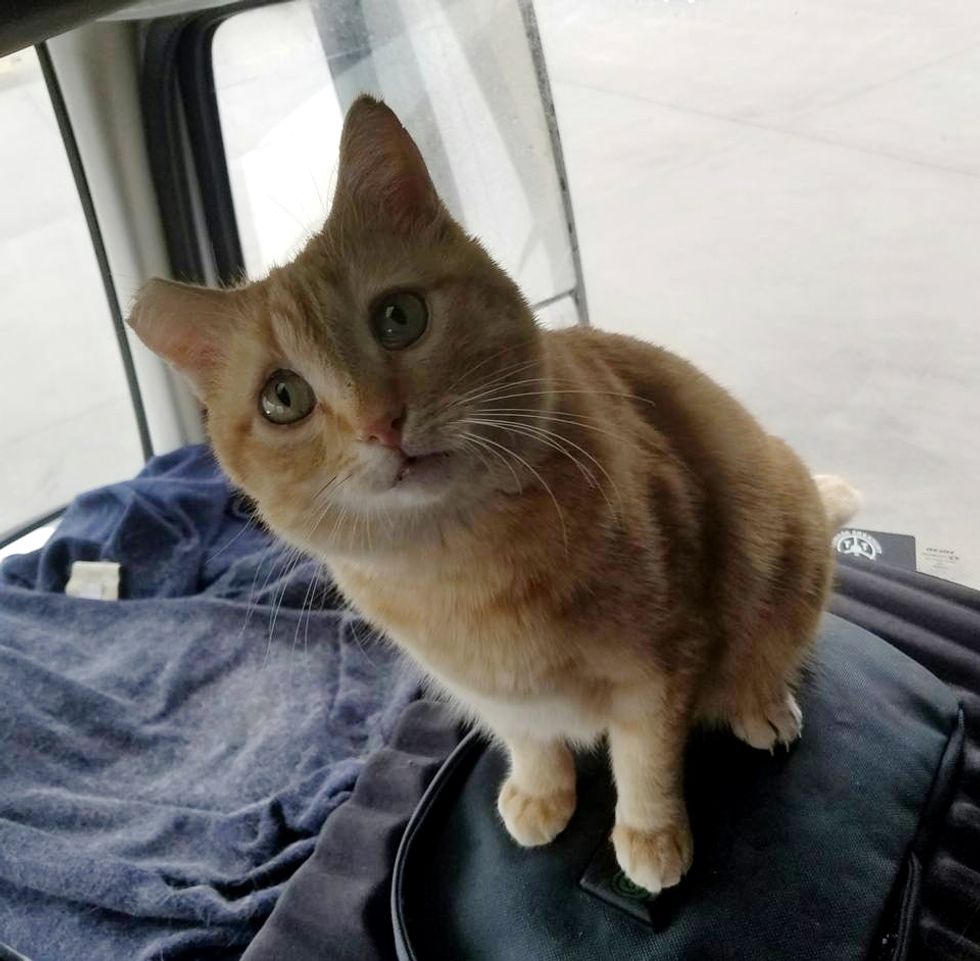 Over a year ago, Paul Robertson and Percy's paths crossed a while after the trucker said goodbye to his beloved cat Howie whom he had shared many years of adventures on the road with. He knew it was time to fill that void in his heart.

That's when he met Percy, a ginger cat with a clipped ear.

"When I first adopted Percy I noticed that his right eye was a little battered... the orbit of his right eye was clearly banged hard by something, and then healed up a little out of shape. Also, just above that, he has almost no whiskers on his right eyebrow. And when he opens his mouth, the lower fang on his right side is also gone. Percy must have lived on the streets for a while before I adopted him," Paul said. 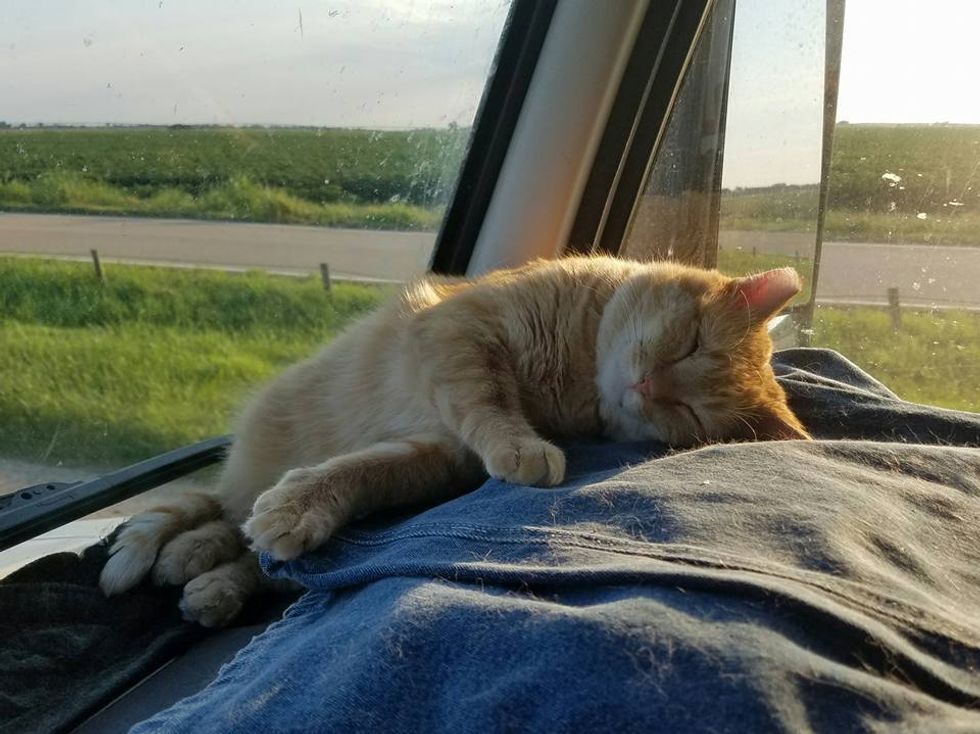 Percy the calm, sweet natured cat quickly adapted to Paul's trucking lifestyle. Together, they have clocked thousands of miles.

They do everything together, they work as a team, and they are partners. "Every truck needs a hero." 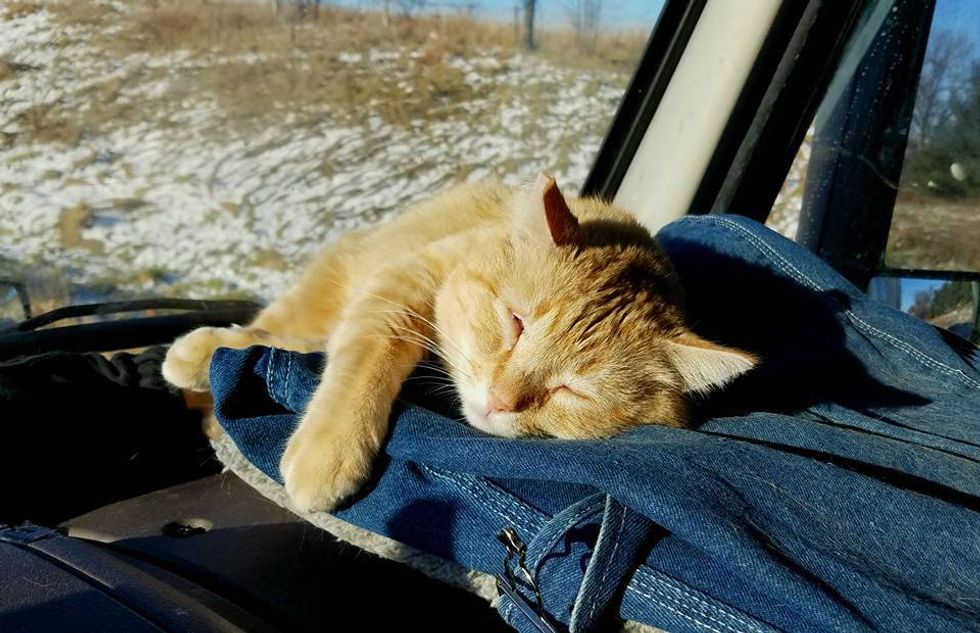 Paul has made a platform for Percy over the passenger's seat where his feline buddy does his daily snoozing, basking in the sun.

"While I'm driving he often climbs onto my lap and rubs his cheek against me, or just sits there and purrs. And the end of the day he gets quite happy because he knows it's dinner time," Paul told Love Meow. 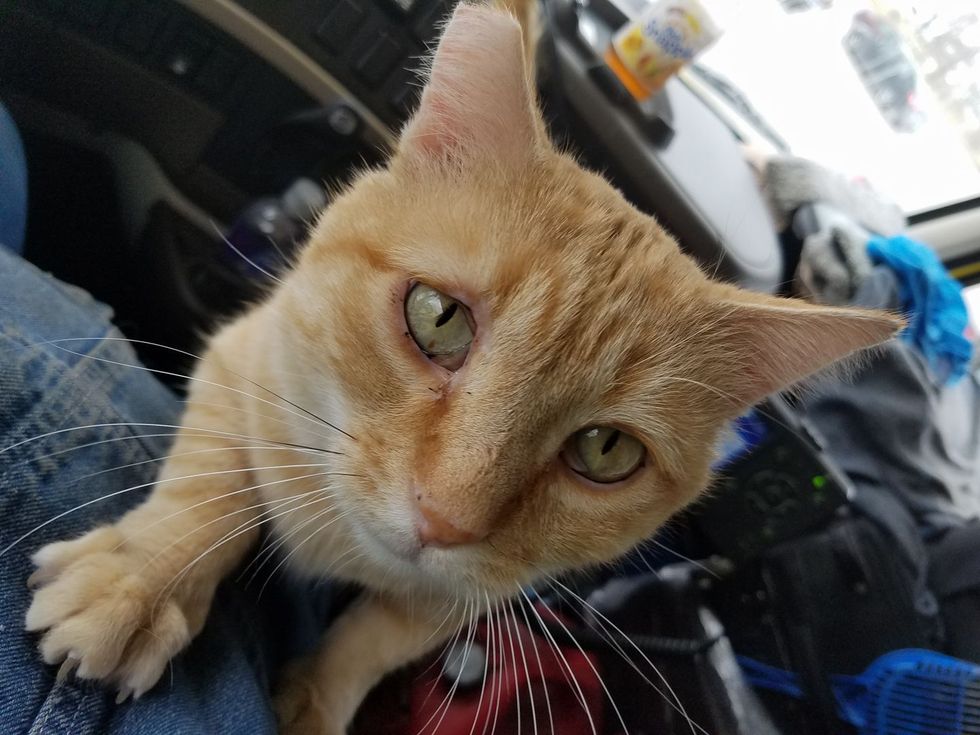 Percy likes to watch the world go by, and when they stop in a rest area, he sits by the window to look at birds, crows and people come and go.

It's his favorite entertainment. 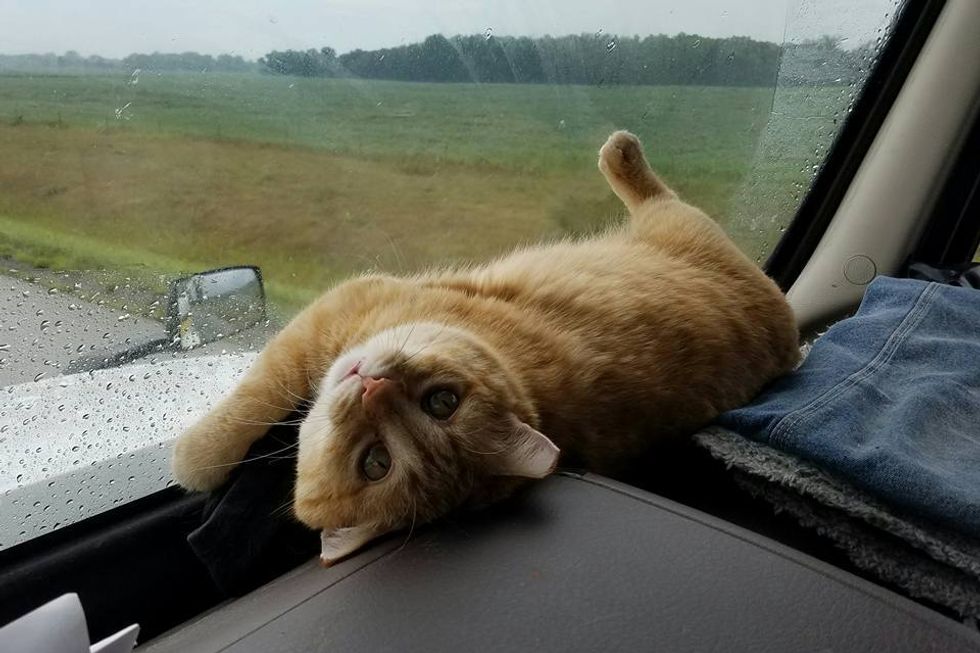 Paul doesn't need an alarm clock because he has Percy, his co-pilot.

"In the morning, Percy hops up into the bunk and settles down in front of my face or thereabouts and begins to play, typically either attacking his catnip mouse or furiously going after his own tail." 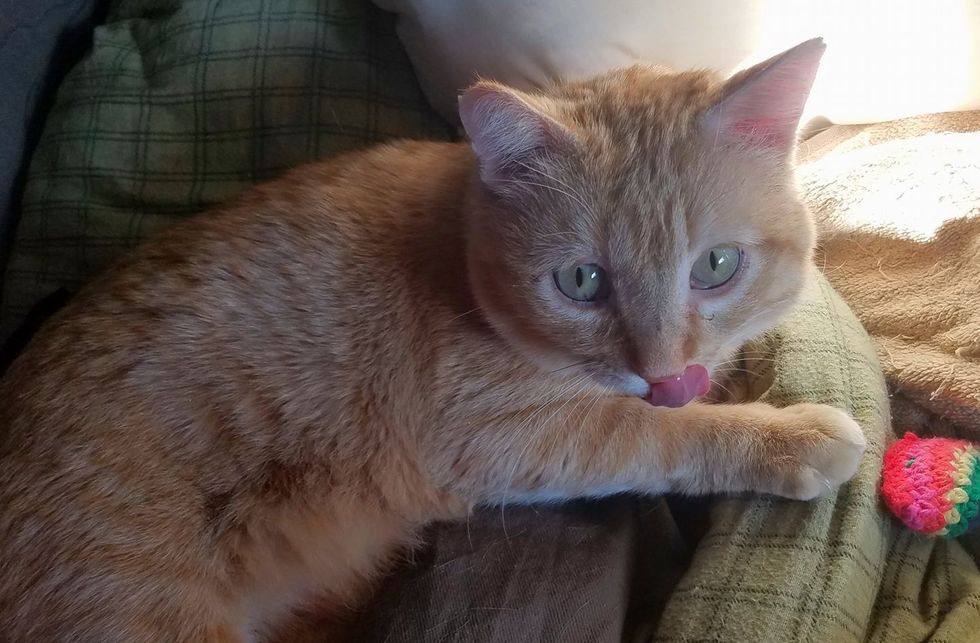 "During our year together I would frequently pick him up and look at his eye, then hug him and whisper to him, 'You've had it tough, but you're okay now. I'll take care of you. You'll always have a warm bed and good food and water, and I'll always look out for you. Don't worry. You're safe.' I wanted him to know I cared.

"I still say the same kind of thing to him all the time, like when we snuggle at bedtime. 'You're safe,' I say. 'I'm not going anywhere.'"

Little Percy always responds with cuddles and snuggles, rubbing his face on Paul as he knows how much he's loved. 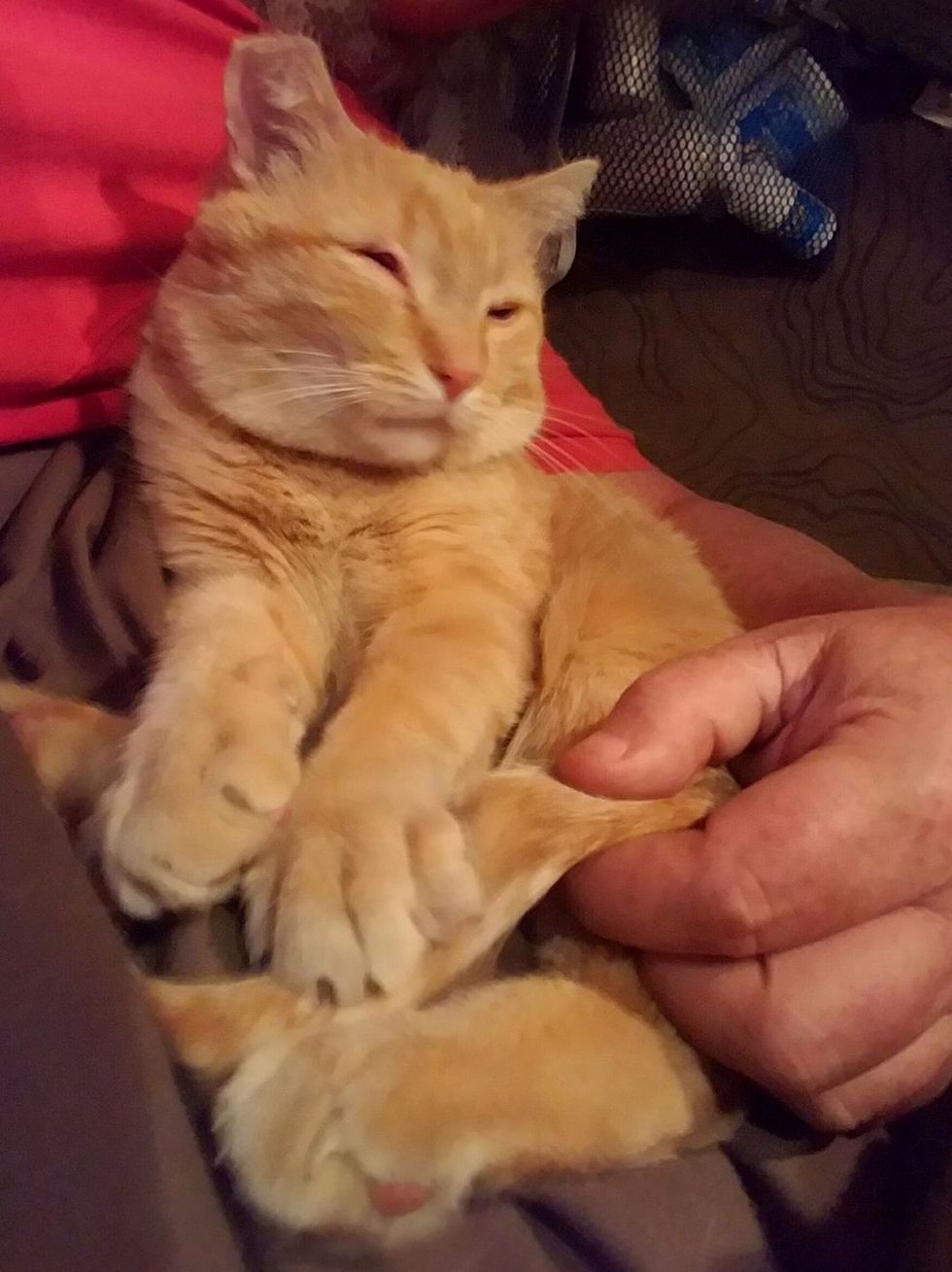 Related story: Man Serenades to 4 Kittens and Keeps Them Enthralled