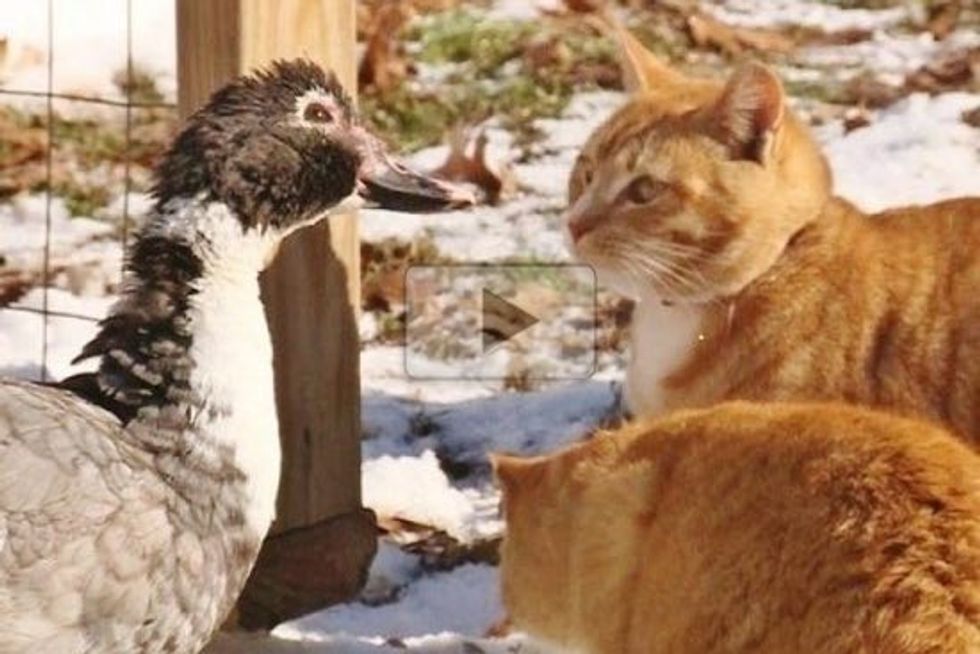 Two Cats Bond With A Duck

Two cats and a duck adopted each other after they were taken in by a family this year. They share an incredible bond.

After Katie Stulc and her husband Nick DuFoe lost their black lab Minnie, they were heart broken, and knew they couldn’t get another dog anytime soon, but they still wanted some pets.

When they heard about two kittens that needed a home, they took them in, but that's not all.

"Another one of my friends posted on her Facebook that she had ducks, and I’m like… 'that'd be kind of fun.'"

The family introduced Penny the duck chick to their two cats, Sheldon and Leonard. The two ginger brothers quickly accepted Penny as part of the gang.

When the cats come to hang out with Penny in the morning, they head right to her nest. They spend the day together in the yard sitting in the sun or just wandering around, and when the sun goes down Penny goes back to her crate.

"Hangin' out… that's what they do," said Katie.

Two cats and a duck have adopted each other and share a special bond. Meet Sheldon and Leonard the cats and Penny the duck.

They were taken in by Katie Stulc and her husband Nick DuFoe after they lost their black lab.

Every morning when the cats come out to the yard, they head right to Penny's nest.

They spend the day sitting in the sun or just wandering in the yard.

This is them cuddling together in a pet carrier.