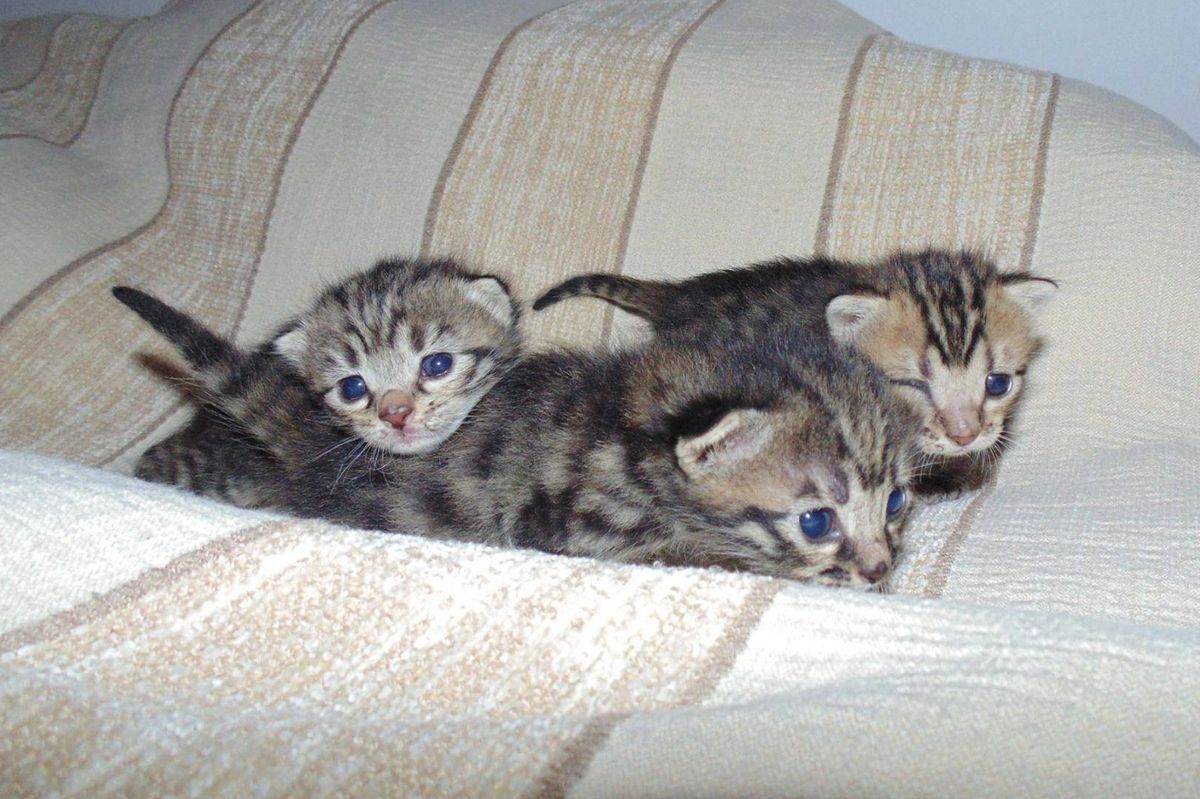 Three orphaned kittens had a rough start to life, but a kind woman took them in and turned their lives around.

It was a cold rainy day two years ago, when a woman found the tiniest little things she had ever seen that were in desperate need of help.

"It was colder than it usually is in September in our country-Romania- and I was coming back from school," Ghionul Gogoasa-Gelal, an English teacher, told Love Meow.

"Just as I was preparing to open the gate to my yard, I saw a big cardboard box next to the garbage can. I didn't pay much attention to it until I heard a very faint meow coming out of it."

She went to investigate and was shocked by what she found - three newborn kittens still with their umbilical cords attached.

"They were very cold and barely alive. I immediately took them in."

Ghionul never nursed kittens before, but she couldn't leave the babies out there fending for themselves. "The first thing I did was to get them warm. They must have stayed in the cold for some time as they were stiff and barely moving and meowing."

She gently rubbed the kittens to get them warm and placed a few bottles filled with warm water around their bed to provide more heat.

"I prepared a formula for them. I didn't even have bottles, so I used a syringe."

At the time she didn't know if the kittens would survive, but with information she found on the Internet, she began the around-the-clock care by feeding the babies every two hours for the first two weeks.

"I moved into the room with them because I had to wake up during the night to feed them and I didn't want to disturb my husband."

Due to limited supplies available in her area, by the time she had bought all the kitten formula in her town, she had to use goat milk for the kittens. "I cleaned them every time I fed them. I tried to replace the absence of their mother as much as I could."

The kittens, who barely meowed when they were found, grew to be three little chatterboxes.

When the kittens reached one month, she taught them to use the litter box. "At a month and a half they could eat on their own. That was the most beautiful and rewarding period of my life."

As they grew bigger and stronger, they became more talkative and meowy than ever.

When it came time to find them homes, one of them had meowed her way into Ghionul's heart. "I kept the girl and named her Muffin and found the two boys loving families."

Muffin, the most vocal of all, became her little guardian angel. "She follows me wherever I go, sleeps only with me and shows me affection all the time."

The two boys are also thriving in their forever homes.

"They had been thrown in a box on a cold rainy day two years ago. Now they are the most loving and talkative cats I've ever seen."

Related story: Man Saves Orphaned Kitten from Backyard and Raises Her into a Snuggle Bug