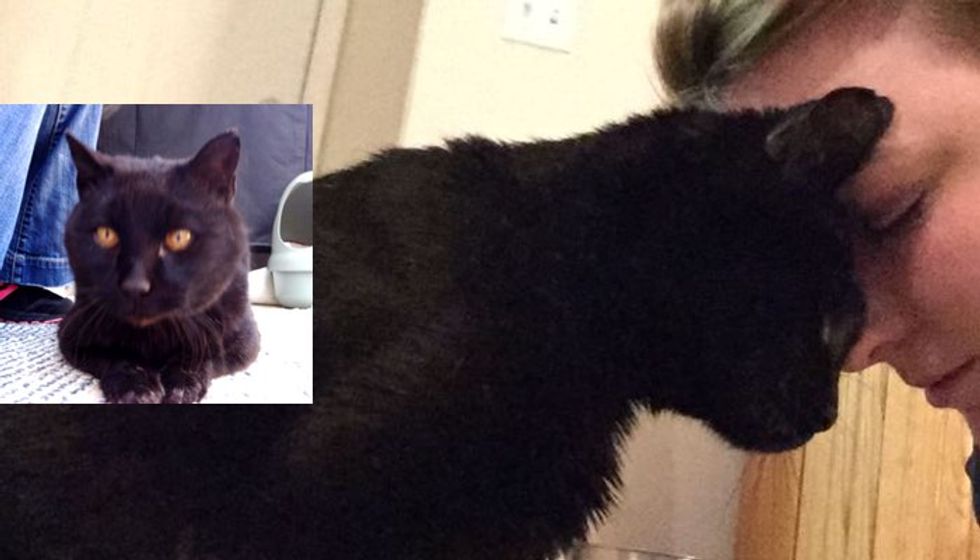 It took this woman almost a year to win over the heart of a stray cat, but what she got in return is endless love.

"About 4 years ago my neighbor started feeding this guy, who she lovingly named 'Norbert' in her backyard. He had been mulling around spending time with her cat, but her husband was allergic so she could not bring him inside since one was already too many," she wrote via imgur.

She slowly won over his heart... "I frequently cat-sat for her while she was out of town (and found the poor guy on more than one occasion after he ran off). I certainly enjoyed spending time with 'Norbert', once I finally coaxed him to come near me using some food."

"Even when he didn't fully trust me all he wanted was some snuggles." (reddit)

"Fast forward a few months and I had moved out of the neighborhood to my own apartment, and I couldn't leave the poor fella behind. My neighbor had seen him around the neighborhood for years. The owners were nowhere to be found.

It would sometimes take him hours in a day, but he would eventually come sit with me. He was still very high strung and ran straight under the bed with the slightest noise."

"Another year goes by...he's relaxed, fattened up, and become the biggest snuggle bug I have ever met. If I get on the ground he'll come trotting up from across the room and just slam into me.

I call him my little mini panther, but I have officially named him Linux. Yes I work in IT."

Linux is an older cat and he is loving his new life. "Every once in awhile I get down realizing he is in his older years and I can't imagine life without him. Then I remember it's important to realize that you gave them a loving, warm home where they can truly be happy and comfortable and that's what matters."

Have you rescued a stray? Share this beautiful story.