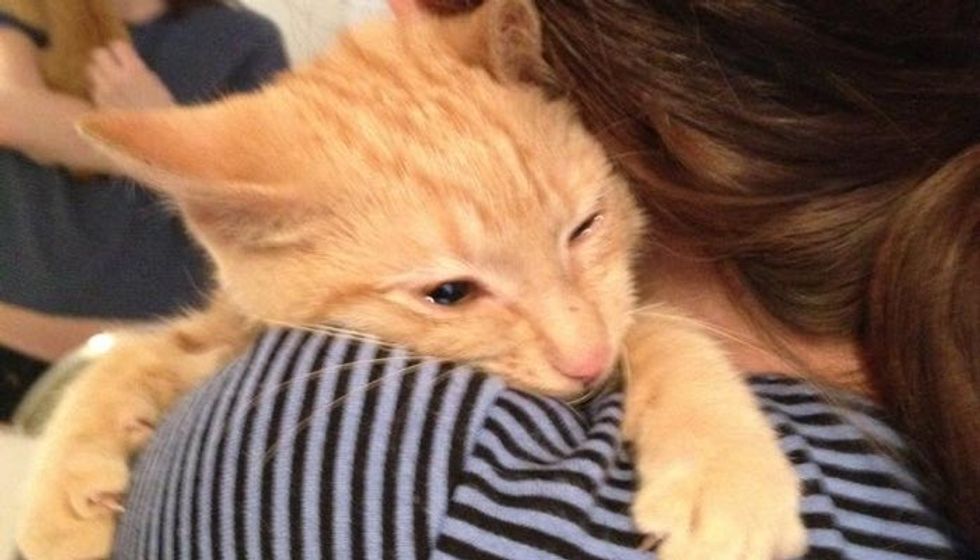 Woman Saves Kitten Despite Being Told He was too 'Feral', Right After Adoption...

A man found a litter of stray kittens by his office in downtown Atlanta. He immediately called his daughter to help him rescue the babies.

"We made it our mission to trap these little guys in a trap we had," reddit user GJones26 said. "We intended to catch them, make sure they were healthy and find homes for them."

The rescue efforts took much longer than they expected. After weeks of waiting, they caught one kitten.

They lost a trap to a homeless person who found it behind the bushes, but they got another one and continued trapping. "Finally after checking the trap religiously every morning we caught this little guy!"

They put everything else aside that day so they could take the kitten to the vet. The ginger kitty was infested with fleas and bouncing all over the cage. The vet told them that he was too 'feral' to be adopted and should be released.

Despite the vet's advice, they took the kitten home. "This is one of the pictures we took of him after getting home from the vet that day. And while the teary eyes are from him having a cold he is now fully recovered!"

"This was moments after we got him in the catch-em-alive trap and had gone to the vet. But since this was our first encounter I was so shocked he would look at me for safety."

They grew very attached to the little lovebug and couldn't part with him.

"We decided to keep him because honestly how could I give up such a sweet little loving baby?"

"One of the doctors at the vet told us that he was too old to be tamed. My family and I wanted to give him a chance and sure enough with a bunch of can food and love he is just as loving as can be.

"We got really lucky that he is such a sweetie at heart."