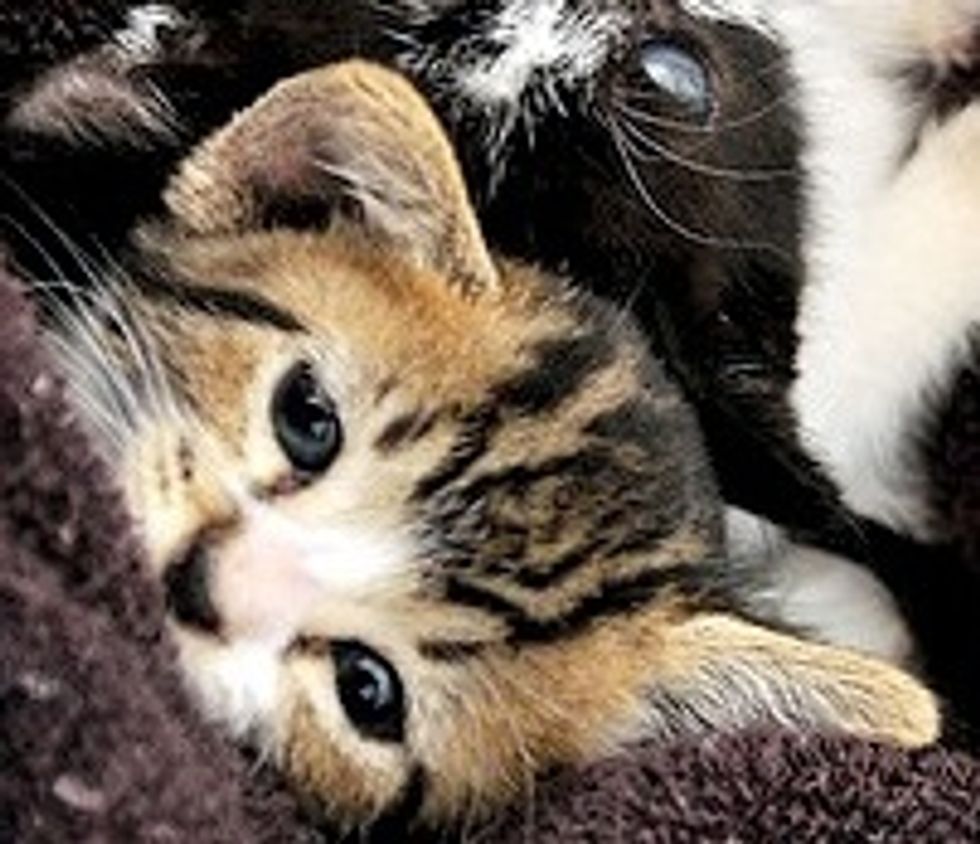 There are a lot of feral cats roaming in Sacramento, California. A litter of four 3 week old orphaned kittens were hanging out in Margaret's back yard. "We immediately set out humane traps to catch the kittens."

"The 3-wk old kittens were the most fun I've ever had in my life. It was a little tricky catching them, but once we lured them out from hiding we just had to pick them up--they were too small to be dangerous. They were VERY angry at first, but after giving them a plate full of warm kitten milk replacer, they were happy as clams! It literally only took minutes before they were comfortable with us. That is the good thing about catching feral born litters as early as possible. Before about 4-5 wks of age, they are open to anything. Once they reach 6-8 wks, they are much more difficult to socialize and have already developed fear of the unknown--i.e. humans and home life," said Margaret.

"On their first day with us these little guys were playing and cuddling with us, etc. Just being normal kittens! They were a ton of work at fist, since they were only about 3 to 3 1/2 wks old. They needed frequent feedings, KMR added to their canned food, special litter, a tiny litter box so they could actually climb in it, they were also very uncoordinated so would step in poop and their food and track stuff all over, so they needed their enclosure cleaned twice a day, litter box scooped constantly to prevent poop tracking!, and baths every day or 2. Within about 2 weeks though they turned into more normal coordinated kittens, and it was just pure fun from them on. They were super playful, but also super cuddly. They really were the best kittens! "

"They love to snuggle in my lap and up against my body, and are just all around curious and open to all these new life experiences. It was not hard for them to adjust to all the new sights and sounds of home life," said Margaret.

Gollum is the biggest and the only male. He is super playful, a little wild. Ninja is always the fastest and extremely energetic. Zilite (formerly Junie) is the most outgoing and absolutely fearless. He is the only tabby in the crowd. Biscuit is the runt of the litter and much smaller than her siblings. She is only 5 lbs full grown. "She is a brat to the other cats sometimes, but she is so quirky and full of personality. We adored her from day one."

All the kittens were adopted to good homes and Biscuit is staying with Margaret and the rest of her furry family.

Photos courtesy of ©Margaret(flickr: Margaret and the Beasts, Margaret’s blog: The Beasts – a blog, Facebook page).