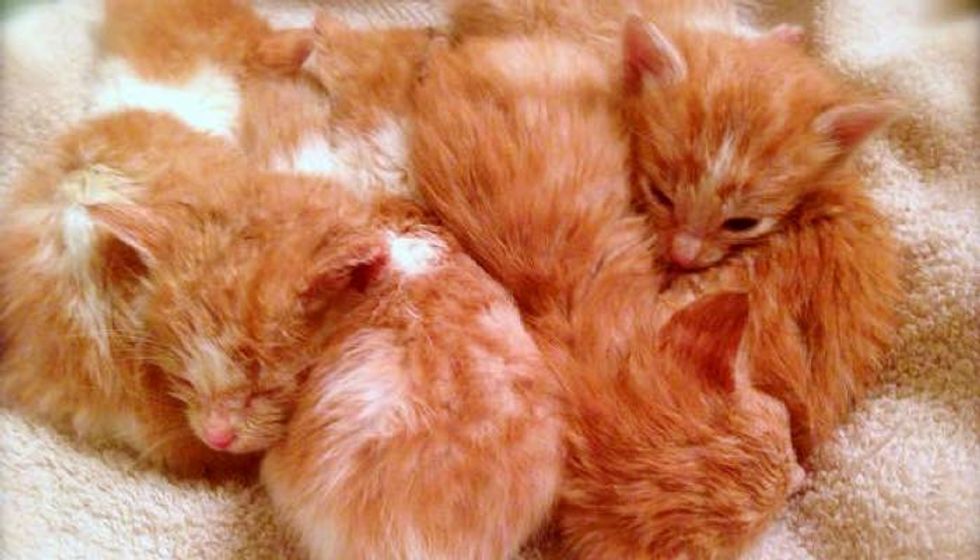 Seven tiny ginger kittens lost their mother from a car accident. Without the momma cat, they were critically malnourished until they were rescued by Langley Animal Protection Society where they were given plenty of food and warmth. "They required bottle feeding every 2 hours around the clock for several weeks," said TinyKittens on Facebook.

"They were 3.5 weeks old when I got them, and only 6-8 ounces.... It was absolutely heartbreaking to hold them and feel their little bones so sharply under their fluff.

"Little Orin was too sick to fight anymore, but there was NO WAY I was going to lose him. He and his tiny sister Zanna could barely eat, so I managed to get a few mouthfuls of formula into them every hour and then l would have to let them rest.... But there's a happy ending...."

"It took seven days of round-the-clock feedings for Zanna to hit 7 ounces - it was a very exciting milestone for us! Notice how her ears and eyes are the size of a regular 4 week old kitten, but her little face and body were the size of a 5-6 DAY old kitten.

The amazing staff at LAPS and some awesome friends helped me out a couple of nights that first week and beyond so I could sleep and wash off some of the poo + kitten formula."

Little Orin was too sick to fight anymore, but there was NO WAY they were going to lose him.

It took seven days of round-the-clock feedings for Zanna to hit 7 ounces.

Here's Orin after 12 days… still tiny, but feeling much better!

little sweetie-pie Orin, 18 days after coming to his foster home

Orin and Zanna, the two who weren't supposed to survive..., but finally thriving!

22 days in, still so tiny for their age, but finally getting some round tummies.

Thanks to Langley Animal Protection Society, they have all found their forever loving homes!