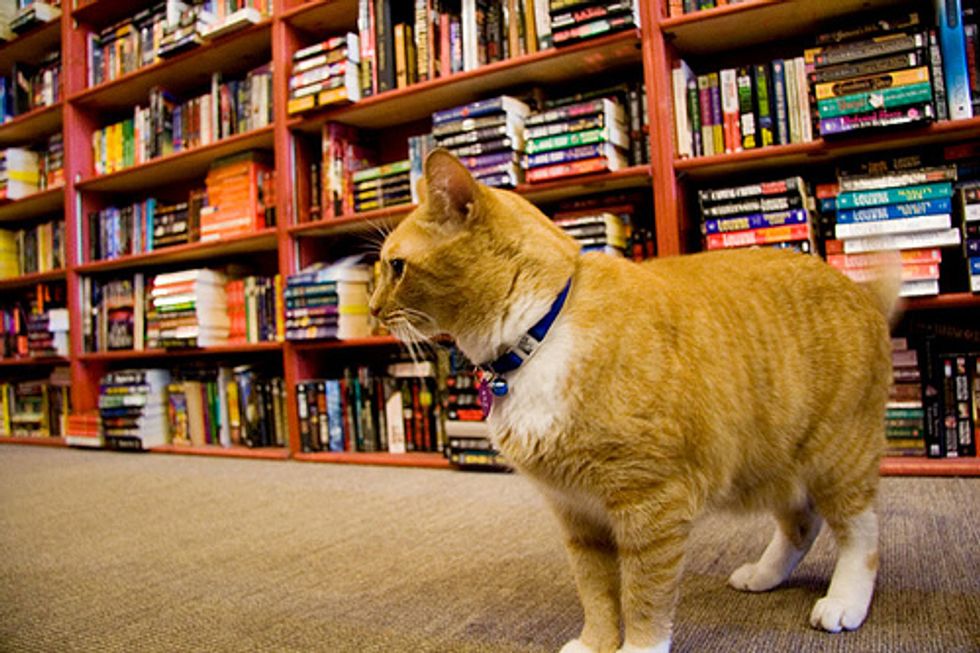 Bookstore Cats from Different Parts of the World

The library cats have gotten a lot of attention from the public. There will be a movie based on Dewey the famous library cat from Spencer, Iowa. However, besides library cats, bookstore cats are also getting noticed and many of them are the faces of their bookstores. They are often featured on their bookstore websites and are the beloved local celebrities.

These two kitties are from the Abandoned Planet Bookstore on Valencia in the Mission District of San Francisco in California. These two buddies love to lounge around in bookstore and let people pet them when they walk by.

Silas is from A Novel Idea bookstore in Lincoln, Nebraska. The little resident cat always seems to be ready for attention. It is an excellent place for cat lovers to be away from home :).

Isbn is from Recycle bookstore West in Campbell, California. Doesn't he have one of the coolest names? If you look at the picture, his tail seems to disappear because he was wagging his tail when the picture was taken :). The cat is very friendly and loves to be petted.

This bookstore cat is sleeping quietly at the Books & Company in Picton, Ontario. Olivia was the former resident cat of the bookstore. The kitty loves lounging around during office hours :).

Penny is a lovely cat from Acres of Books in Long Beach, California. She loves boxes and enjoy lounging around in the store, greeting people who pass by her aisle.

This beautiful tuxedo is from Spoonbill & Sugartown in Brooklyn, New York. The little furry friend is perhaps the most relaxed cat in town. He would sleep on a pile of books for hours without being roused by the visitors.

Ruffles is from Beers Book, Sacramento, California. He is featured on the bookstore's website. "Beers Books, home of Raffles, the world's best bookstore cat!"

These two kitties come from Queen Anne Books in Seattle, Washington state. They are friendly and kind kitties that love attention from everyone in the store.

Zola is an one-eyed kitty, the mascot and full-time 4 legged staff of the Iliad Bookshop in North Hollywood, California. Zola was rescued from a wire-mesh hamster cage. She was found having severe infection in his right eye which had to be removed. She also lost a few teeth, but against all odds Zola not only survived, she became affectionate, friendly and loving to everyone in the bookstore.

Tara is the current resident cat at the Bodhi Tree Book Store in West Hollywood, California. Before Tara, the store owner had Chubby, the first resident cat, and Little Girl the second cat that retired a few years ago.

Gwenievere is the "general manager" of the Already Read Used Books. He is part Manx, part Maine Coon and part Siamese. "Besides helping with the management of the bookstore, Gwenievere greets customers, and then guides customers through the bookcases and makes frequent recommendations."

They are from Powell's Books in Portland, Oregon. Fup, the tabby cat passed away on Oct 25, 2007 at the age of 19. "In her later years, she mellowed out quite a bit and even became friendlier towards her co-workers, especially if they shared their lunches. Her favorite foods were canned tuna, chicken (especially Tandoori), and pulled pork. Cold cuts were also welcome."

Bookstore cats from other places of the world:

Real live cat in a bookstore in Bormes les Mimosas on the French Riviera.

He sits on the debit machine and turns it from English to French!