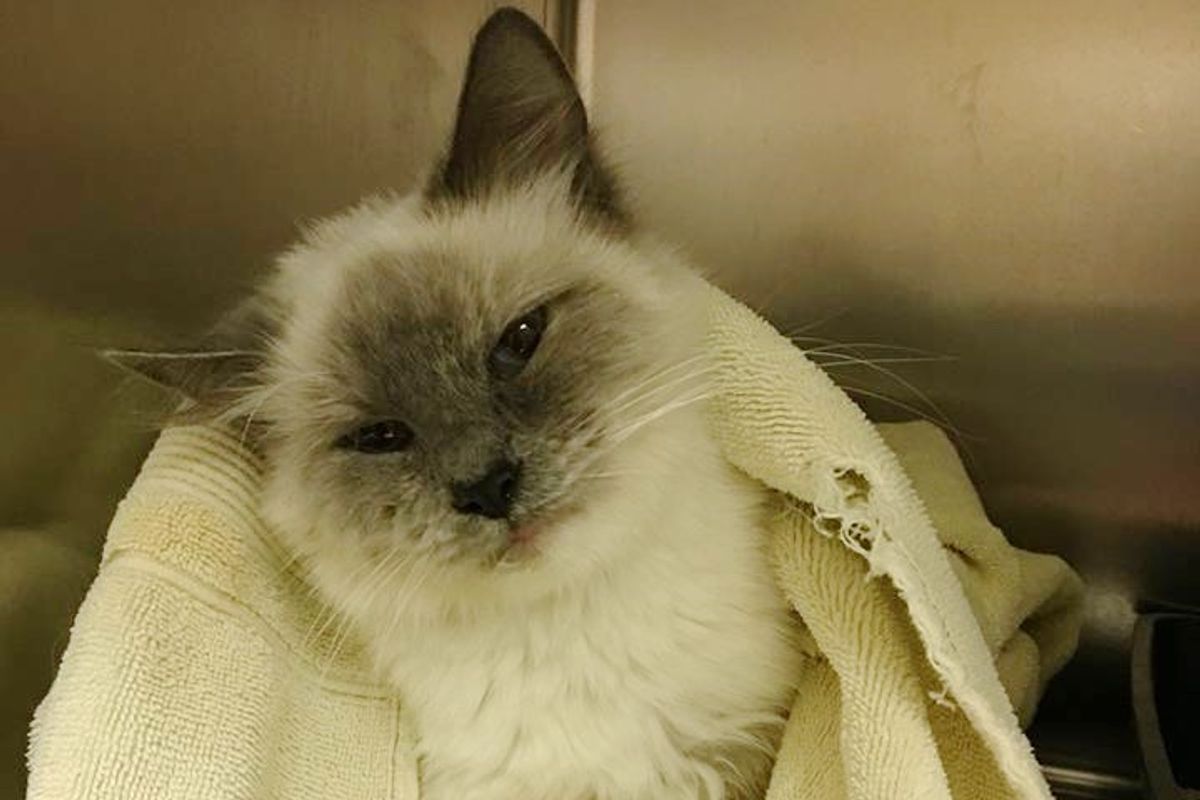 A shelter cat was trying everything she could to hide in her blankets from everyone, and was barely moving. But a woman refused to give up on her and it changed her life forever.

Sasha the cat was picked up by a humane officer and brought to the shelter.

"When I first saw her she was unresponsive and on the floor of a separate room of the shelter," Dorella Tuckwiller, founder of Itty Bitty Kitty Committee (IBKC), wrote.

The kitty was trying hard to keep herself away from others, but she could barely move.

"To walk in and see those women gathered around this kitty gave me chills. They cared, they were doing what they could do for her, but they knew that she needed more. They texted me and asked if IBKC could help. Yes!"

Tuckwiller took Sasha to their vets, hoping to find out what was wrong with her. "When our options for testing ran out there I asked what else could be done. I didn't feel as though Sasha wanted to give up."

The vet suggested several other tests that could be done at the Emergency Clinic, so off they went.

Sasha kept herself under her blanket.Photo: Itty Bitty Kitty Committee

"After an ultra sound it was found that this girl had bladder stones. Bladder stones that had been causing her discomfort for so long that she didn't even know how to use a litter box!" Tuckwiller said.

Now everything made sense as to why Sasha was barely responsive. She was in pain.

They performed surgery to remove the stones and put her on a strict diet to help her recover. Sasha was on the mend. "Her amazing foster took her in and gave her all of the care and love that she needed."

The kitty who was so shy and not moving at all, now began to thrive.

Sasha went home with her foster parents and made vast improvements.

"She no longer hides but now jumps to greet you when you open the door. She compares ear-rubs to heaven and head bonks when you lay down with her."

"When I met Sasha, I was certain it would take her months if not years to adapt to me. Her foster warned me to be patient and loving regardless of Sasha's shy demeanor," Lexi Browning told Love Meow.

"From the photos, I could tell she had anxiety-- something I've struggled with heavily for the last four years. Part of having panic disorder is knowing how to create a calm, safe environment, so I knew Sasha would be a wonderful fit."

The day they met! It was love at first sight.

"The day I brought her home, I opened her carrier and she immediately nudged my hand--marking the sign of an obvious lifelong friendship."

On her way to her forever loving home.

"She assists me daily in avoiding little anxieties by trailing after me when I'm especially nervous and headbutts my ankles," Browning told Love Meow. "I guess you could say we're a purr-fect match."