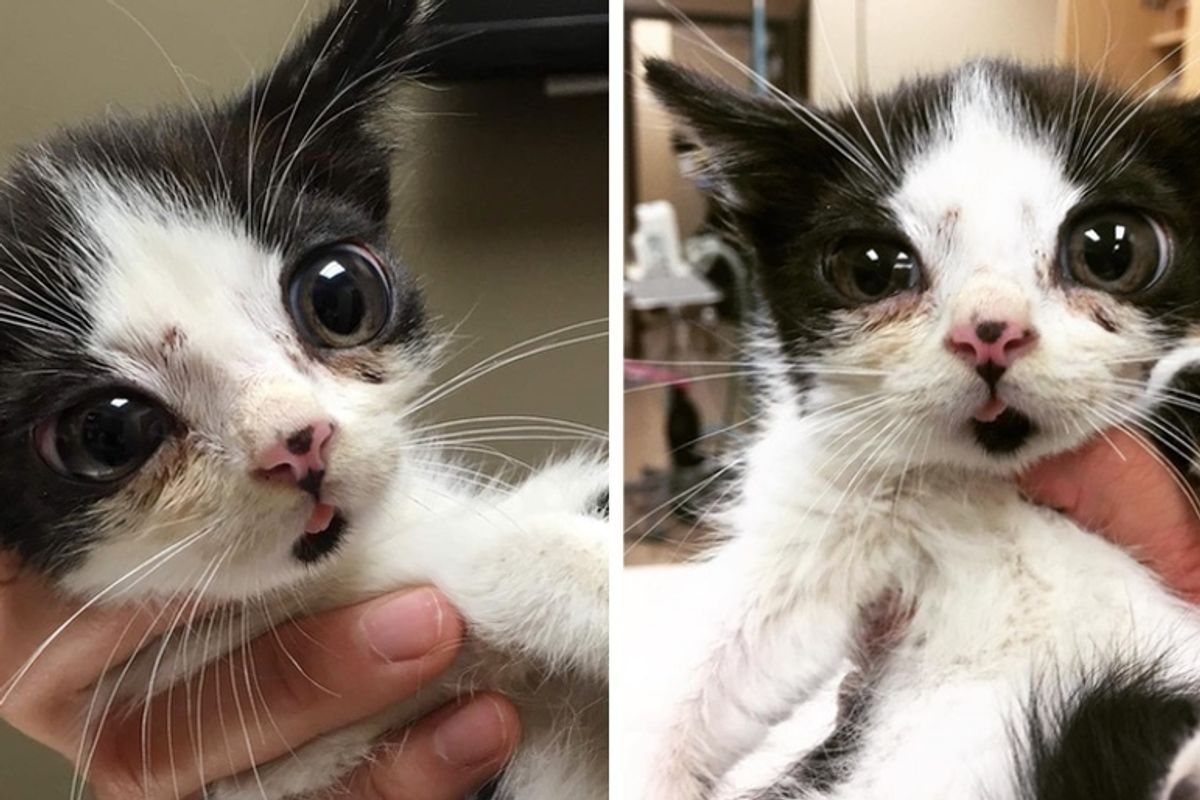 A resident from the Chicago Suburbs found a box left on her porch. When she opened it, she discovered a tiny kitten abandoned inside.

She rushed the kitten to her vet as he needed immediate medical attention. They found a large wound on his neck, and he was taken to the ER to have it repaired with stitches.

The next day, Elise Hall, a small animal veterinarian at the animal hospital, met with the kitten when he came in for a full examination. "He was pretty shy and subdued. But as the day went on, he started being more outgoing and playful," Elise told Love Meow.

"He was so unusual and I just adored his feisty spirit - I described him as 1.3 pounds of eyeballs and sass."

The tiny bundle of fur quickly snuck his way into her heart. Elise found herself checking in on the kitty between her appointments. She couldn't stop thinking about him.

By the end of the day, when it was time to find him a foster home, they knew just the right person for him. "It was suggested that I foster him until he was healthy and oversee his recovery, how could I say no?" Elise added.

The sweet little boy was named after a majestic creature from Star Wars, Porg, who also has very large eyes.

At first, they thought Porg was just unusual in appearance, but soon discovered his genetic condition - things such as grooming or scratching his ears or neck would lead to large recurrent tears in his skin.

After a skin biopsy, they confirmed that Porg suffered from a hereditary collagen defect, which is known to people as Ehlers Danlos Syndrome.

"By this time it was clear - Porg was a permanent member of our family."

"It has been quite the difficult learning process finding what has helped keep his skin healthy and safe, but we now have our routine down, and he has been doing great," Elise said.

"Clothing has been incredibly important in protecting his skin so we are always looking for outfits that fit the best and provide the most coverage, while ensuring he is comfortable."

"He also suffers from some eye disorders, which goes along with his Ehlers Danlos Syndrome, but this too is well controlled at the moment with daily eye drops."

Porg doesn't let anything slow him down. He is fearless, adventurous and has a larger-than-life personality.

Watch Porg's journey to his forever home in this video:

When he hears the sound of snacks, he comes running. He loves to eat and isn't picky about treats.

"Sometimes we kid he was born to be the head Tom cat on the block because his personality is so big and he is such a free spirit."

"He can also be the cuddliest muffin maker and the loudest purrer once he's met his play quota for the day," Elise told Love Meow.

Porg curled up in his human's lap and purred up a storm.

"We just love him to pieces and hope he brings as much joy to others as he does to our home. He certainly is a special feline!"

Related story: Cat Showed Up on Porch, Hiding His Paws From Everyone Until Someone Offered Help