Cat Who Longed for Love, Completely Transformed and Found a Place to Call His Own

Four months ago, Valentino the cat found himself in the shelter where his fate became uncertain....

His world was in darkness as his eyes were stuck shut due to infections. He was emaciated and so sick that no one would touch him until he met a kind woman who changed his life forever. 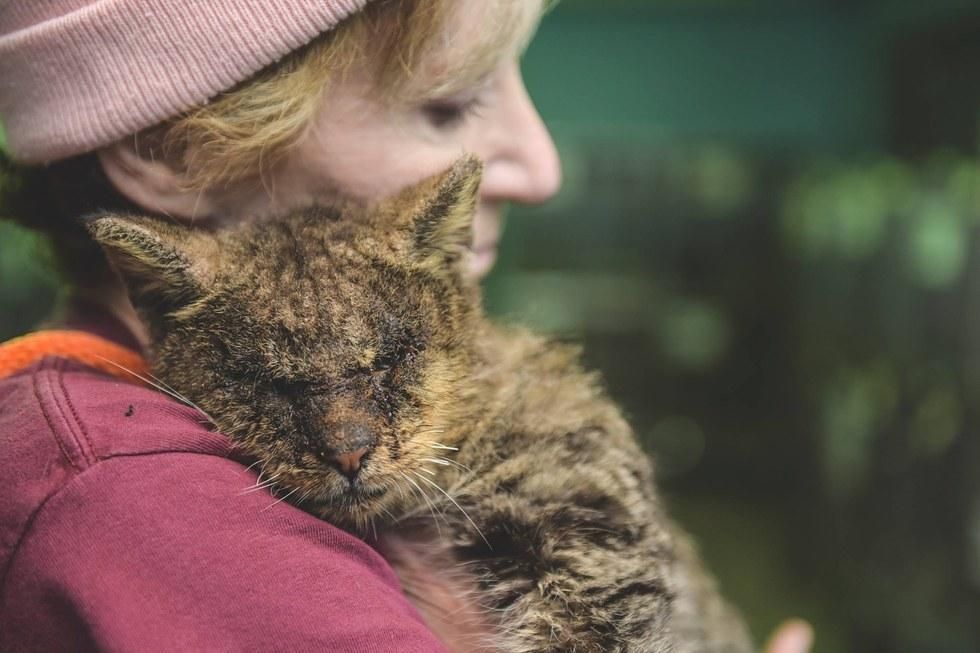 We shared Valentino's rescue story back in early February. At the time he suffered from a highly contagious condition called sarcoptic mange. Valentino could barely maneuver his body, and his eyes were crusted shut.

When Elaine Seamans, an avid rescuer, came to his cage, the sweet kitty begged for love.

"I opened his cage door after being shocked by his appearance. He stood up and almost fell over but he turned and came to me," Elaine told Love Meow. 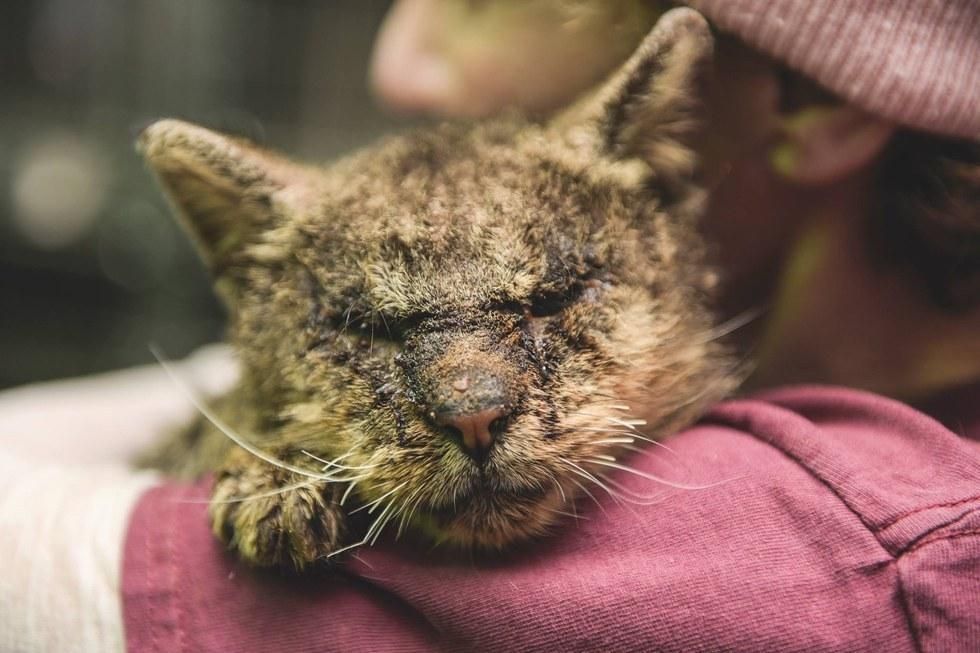 He made the tiniest cry for help and reached out his paw to Elaine with the little strength he had. Elaine put him in her arms, and it was that hug that brought life back into that frail body. He nuzzled on her shoulder and didn't want to let go.

That day marked the end of his shelter life and the beginning of a new chapter. 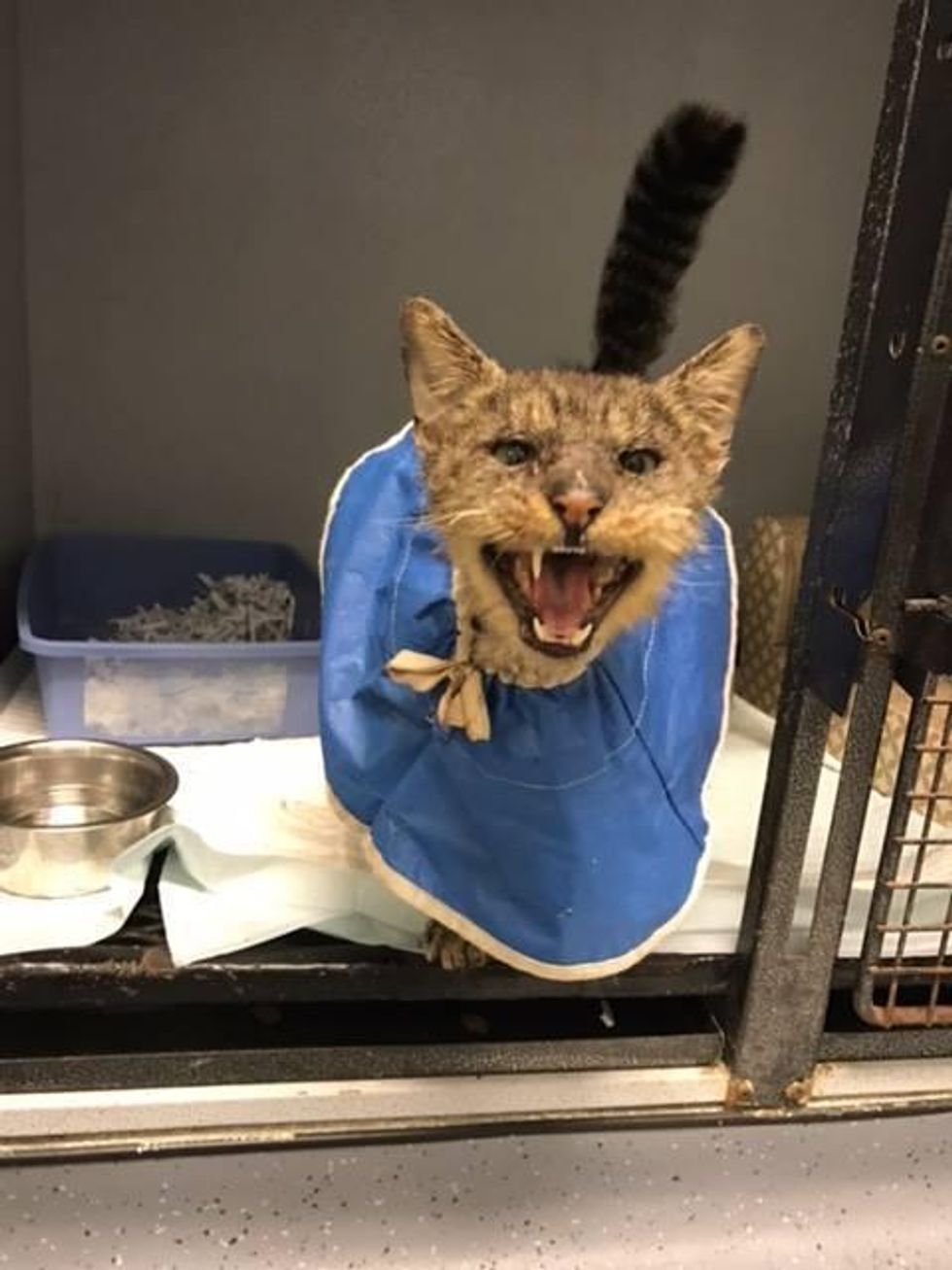 Leave No Pets Behind, a rescue group in California, learned about Valentino's plight and graciously opened their arms to welcome him in. "I heard his little cries for help over the phone and my decision was made," Toby Wisneski of Leave No Pets Behind, said. "We cannot let him die."

The road to recovery was a long one, but Valentino continued to make small improvements every day. Everyone was so inspired by his fight to live. "All he wants is love." 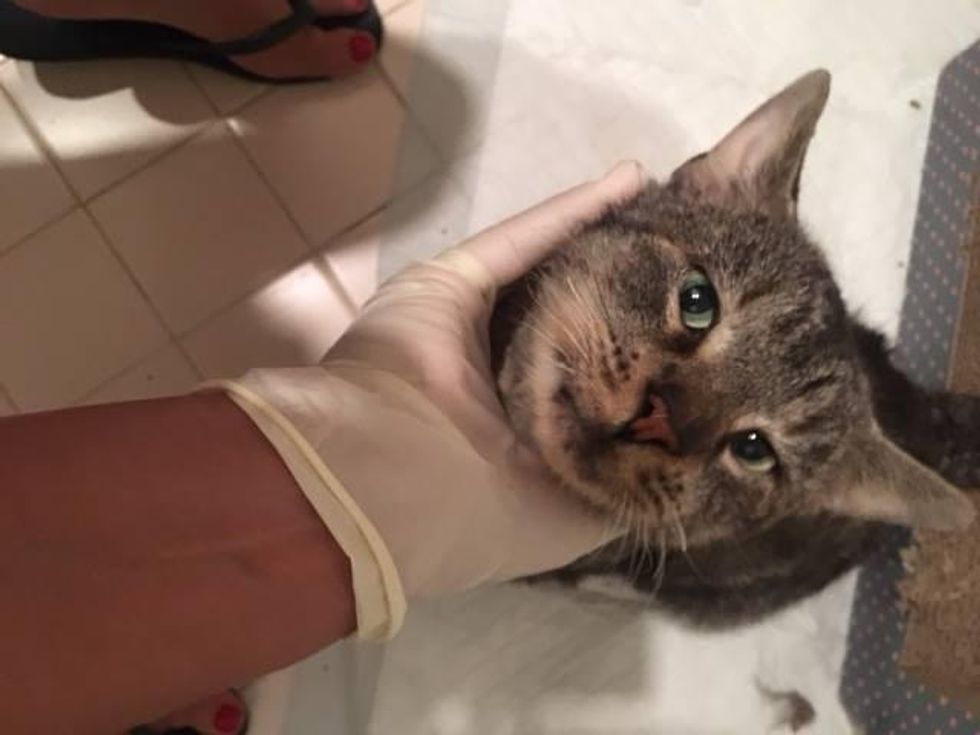 As Valentino healed, his personality shone. He became a little chatterbox and showed so much gratitude whenever he received treatment. He never wasted food and worked hard to get bigger and stronger.

As his skin cleared up, his fur began to grow back. 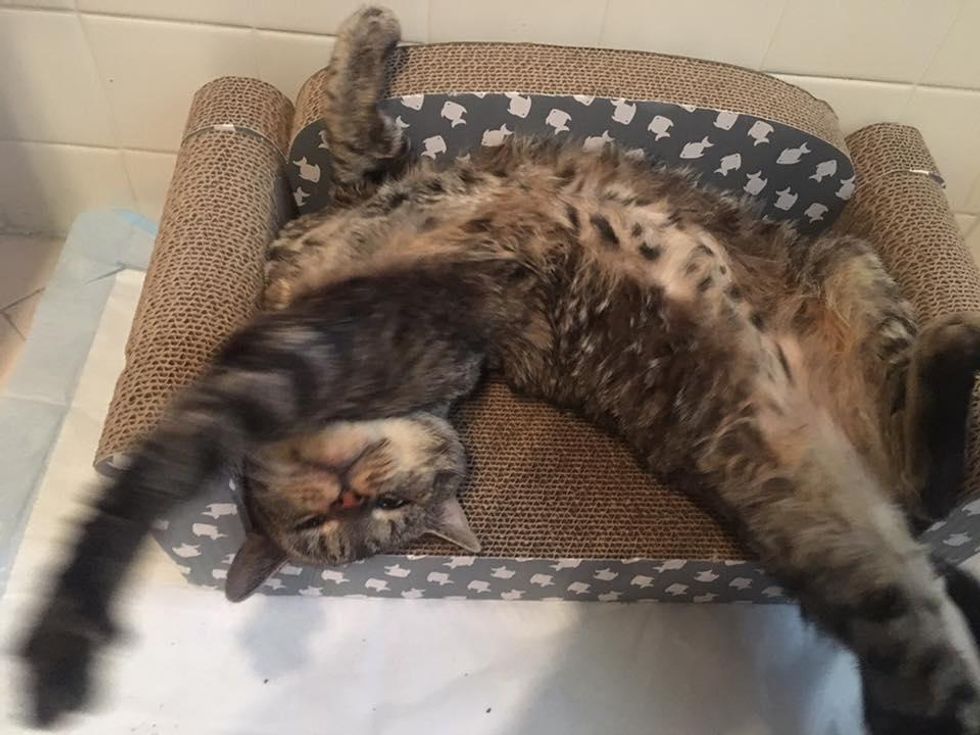 "In spite of it all, he is the most loving, grateful and sweetest little fella ever and he is so grateful for his Gift of Life and Love and excellent medical care," Leave No Pets Behind said. 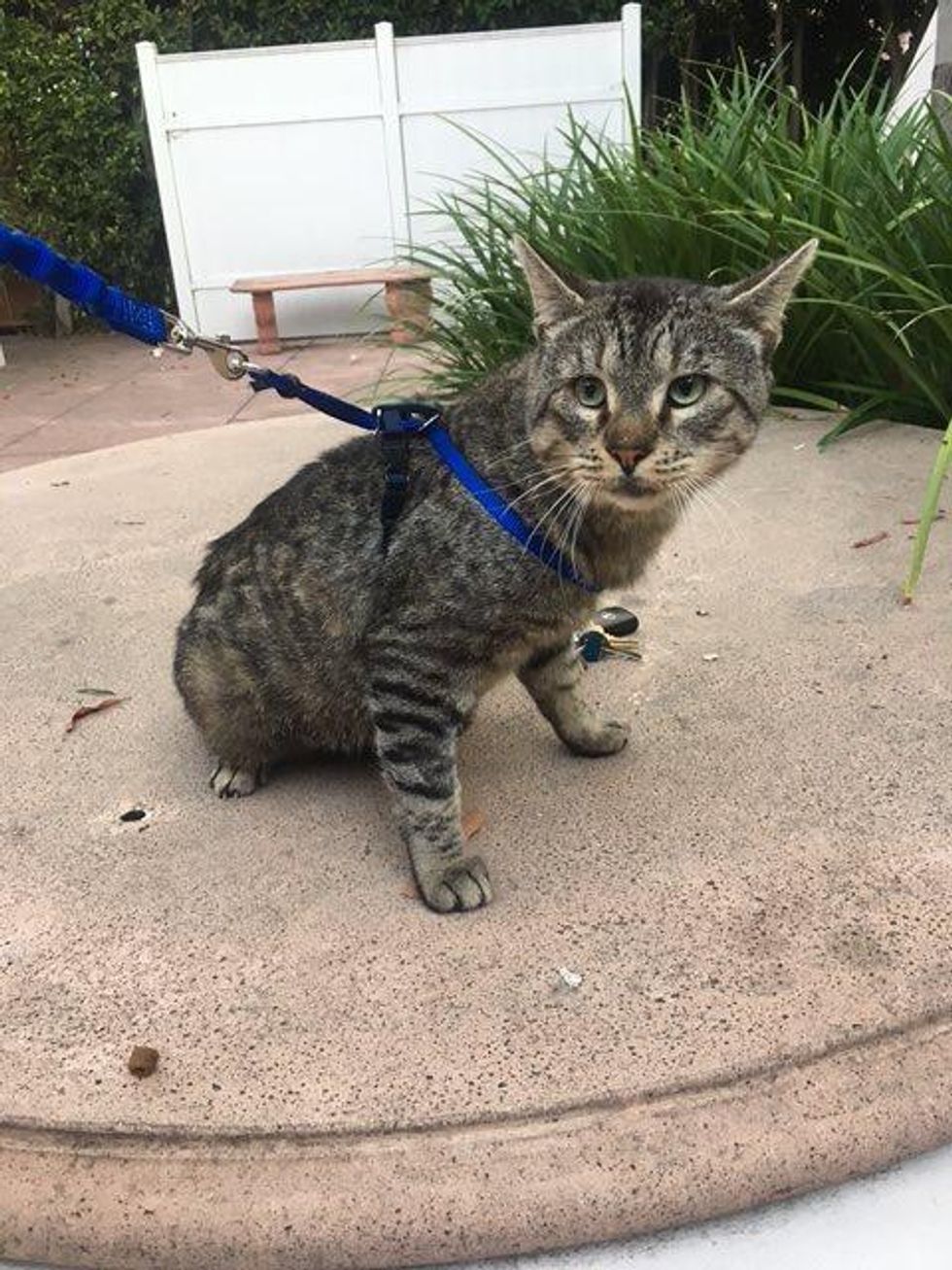 When he moved into his foster home, he found love and comfort.

Since then, sweet Valentino hasn't stopped cuddling with his foster mom day and night. The tabby boy has so much love to give. 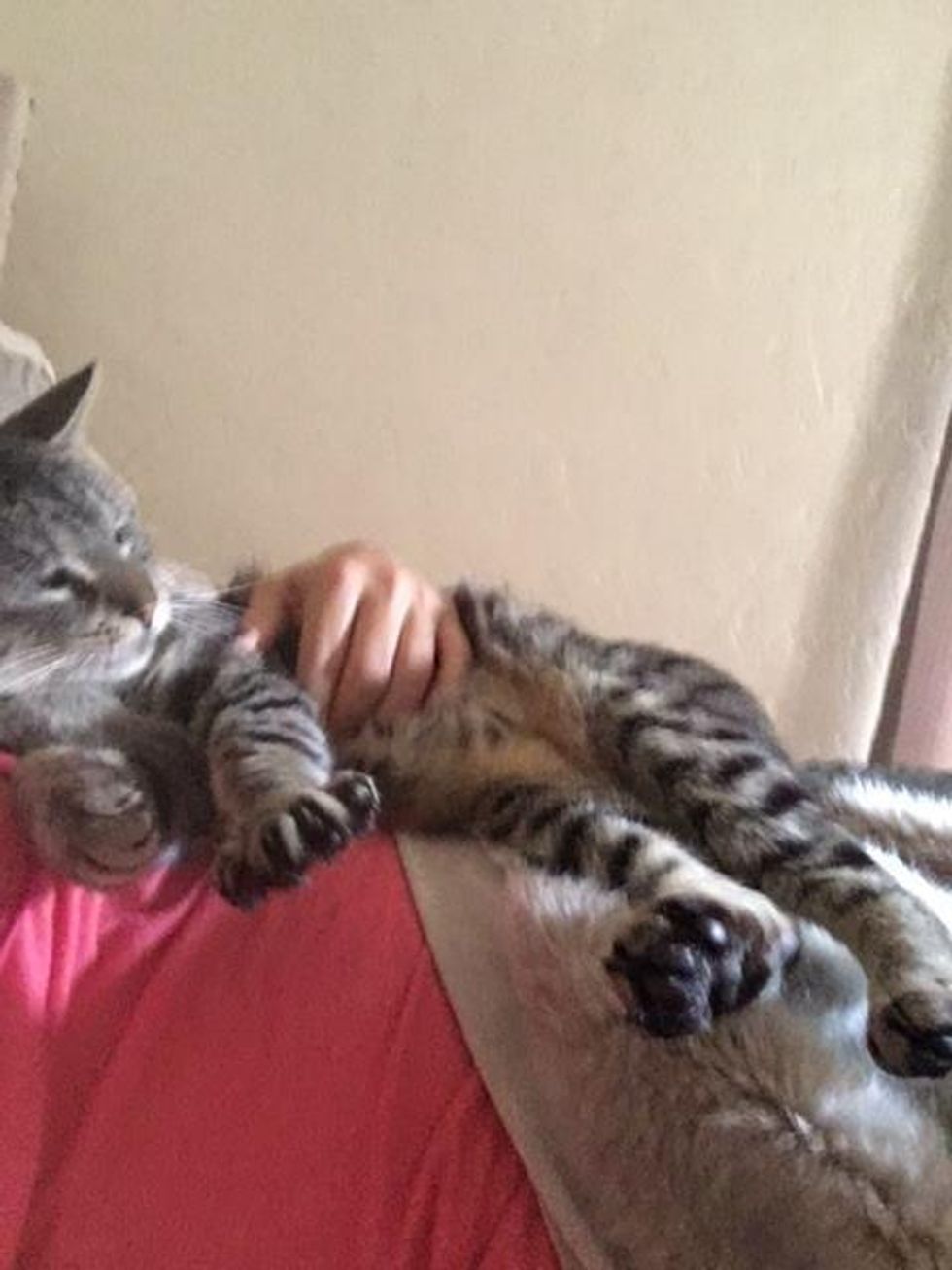 On June 4th, beautiful Valentino finally found his forever loving home. That morning, he woke up his human with a usual morning call.

Valentino never left his foster family. They couldn't part with him, and now he's officially home! 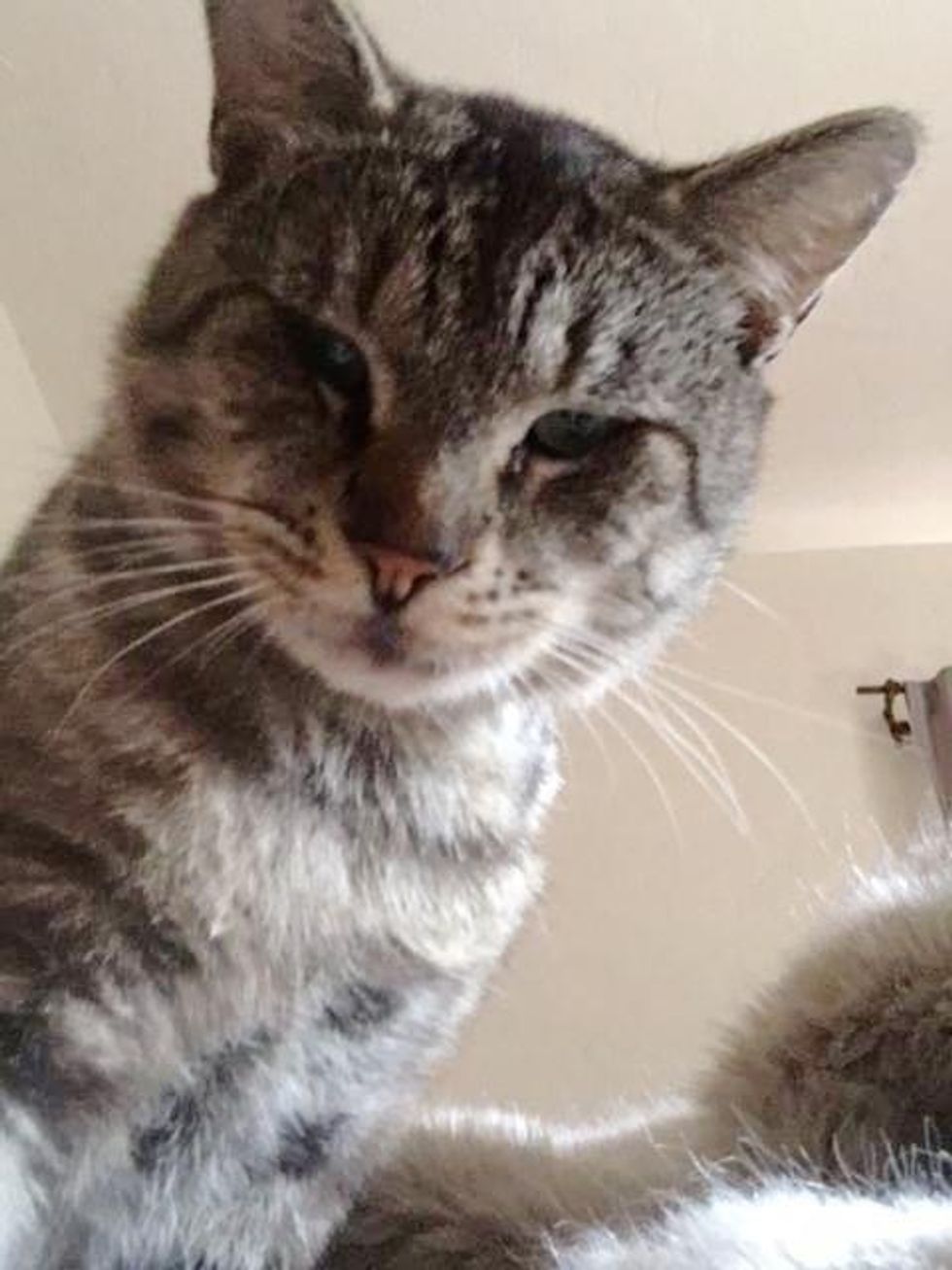 "From certain death to the promise of so many tomorrows, Valentino's journey on the road to recovery and his gift of life and love has been nothing short of miraculous," Leave No Pets Behind said.

What an incredible journey it has been. Valentino is holding his human's hand while she's giving him belly rubs. 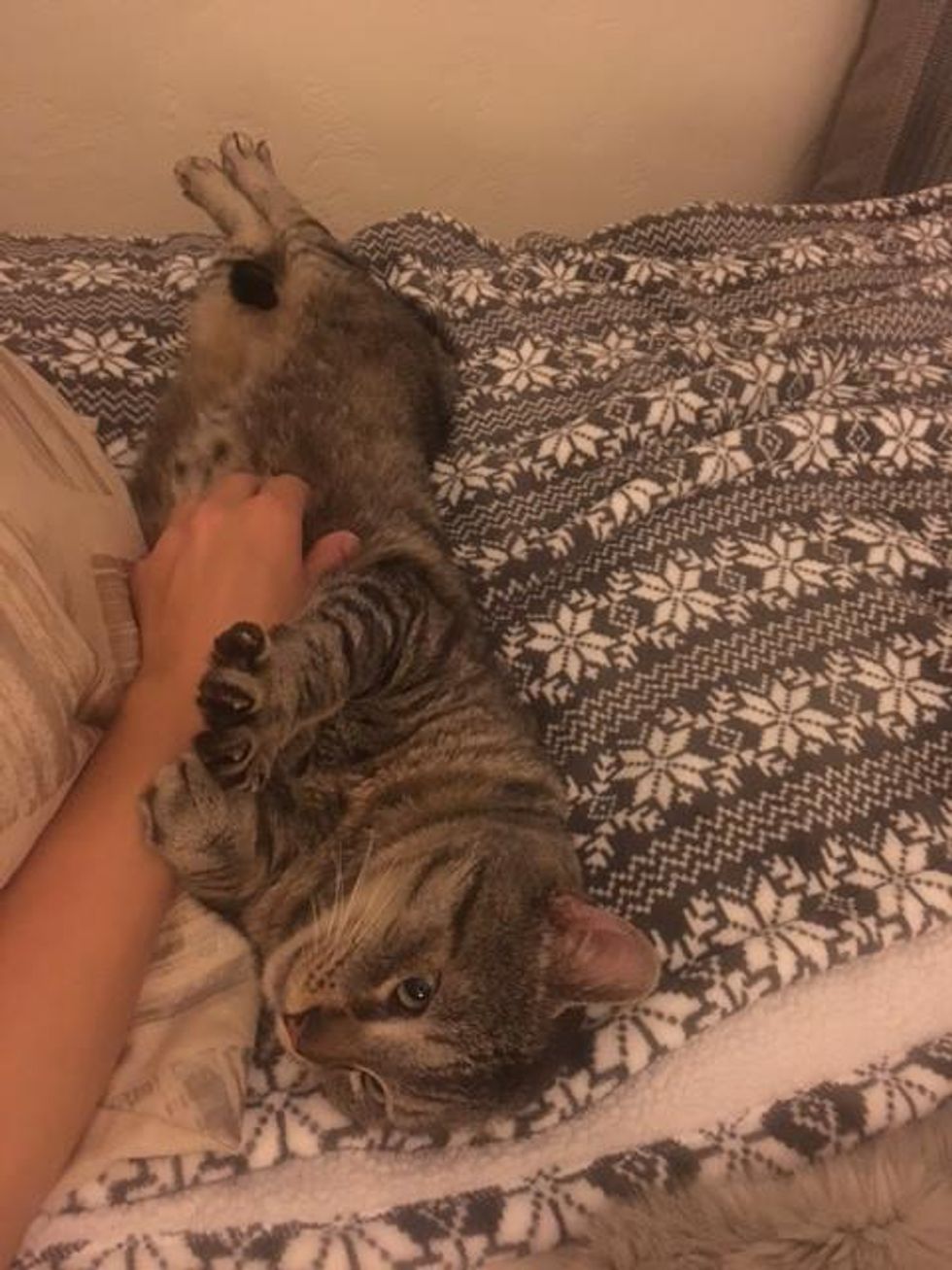 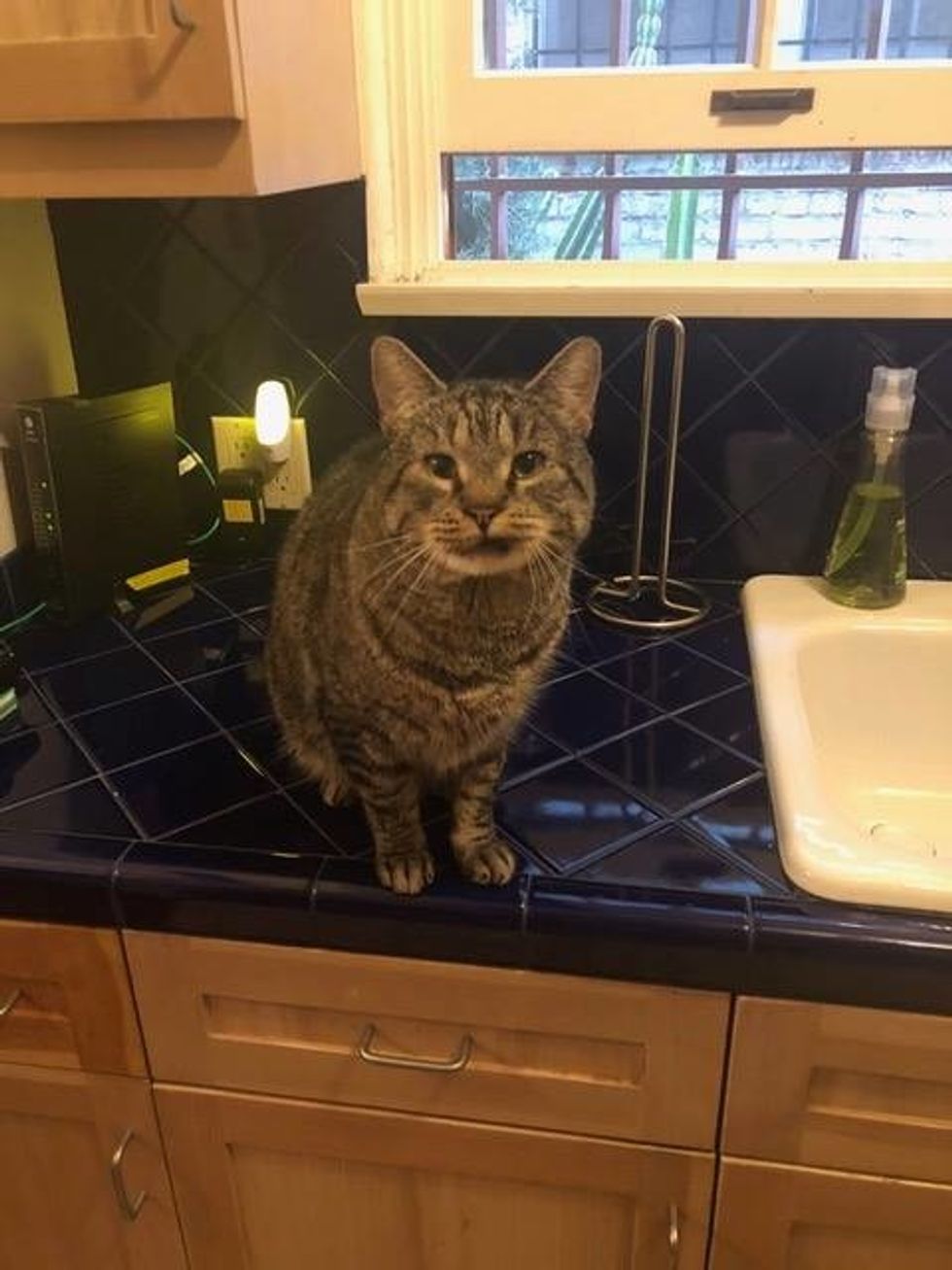 Valentino and his best friend Thumper! 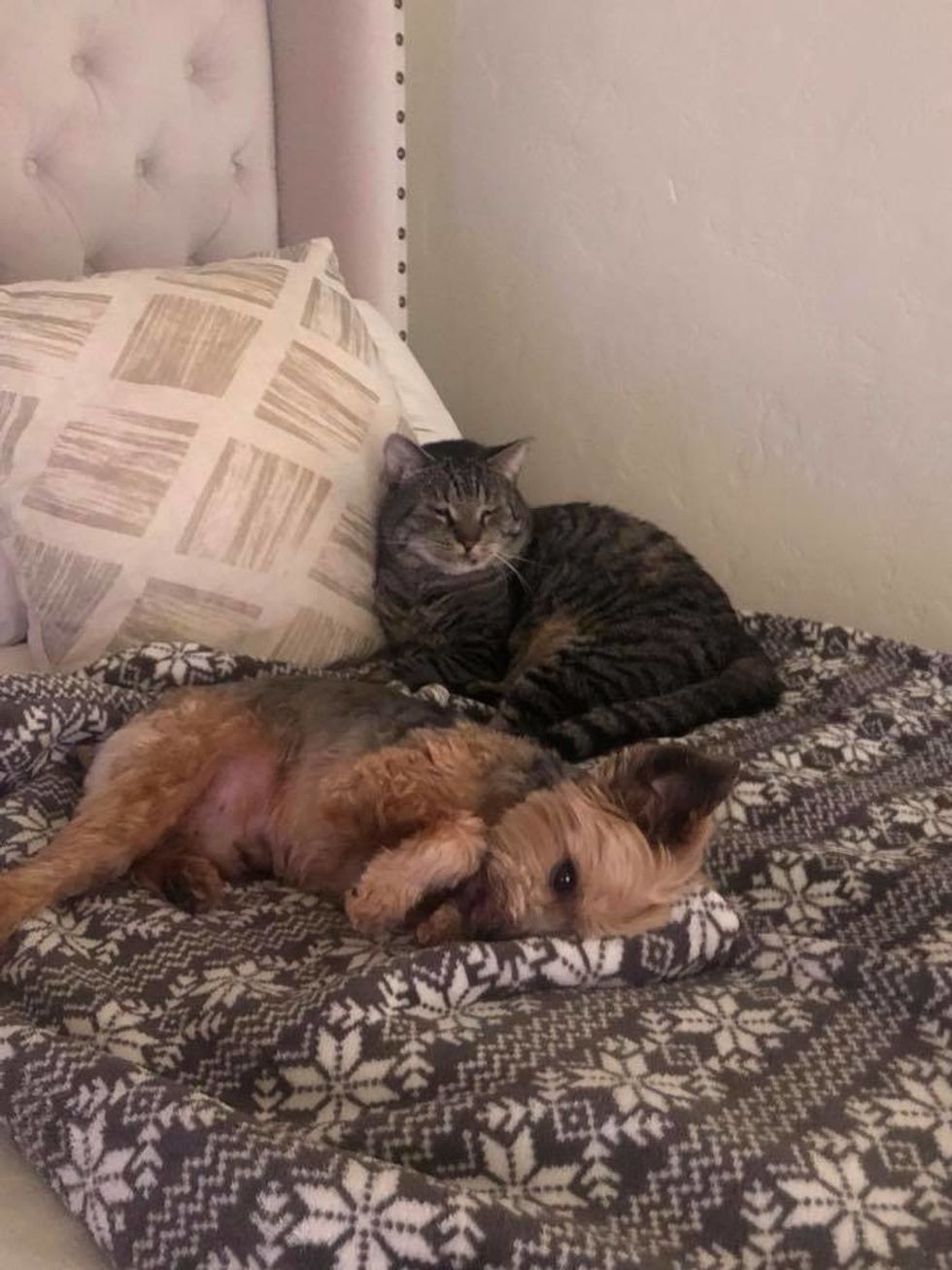 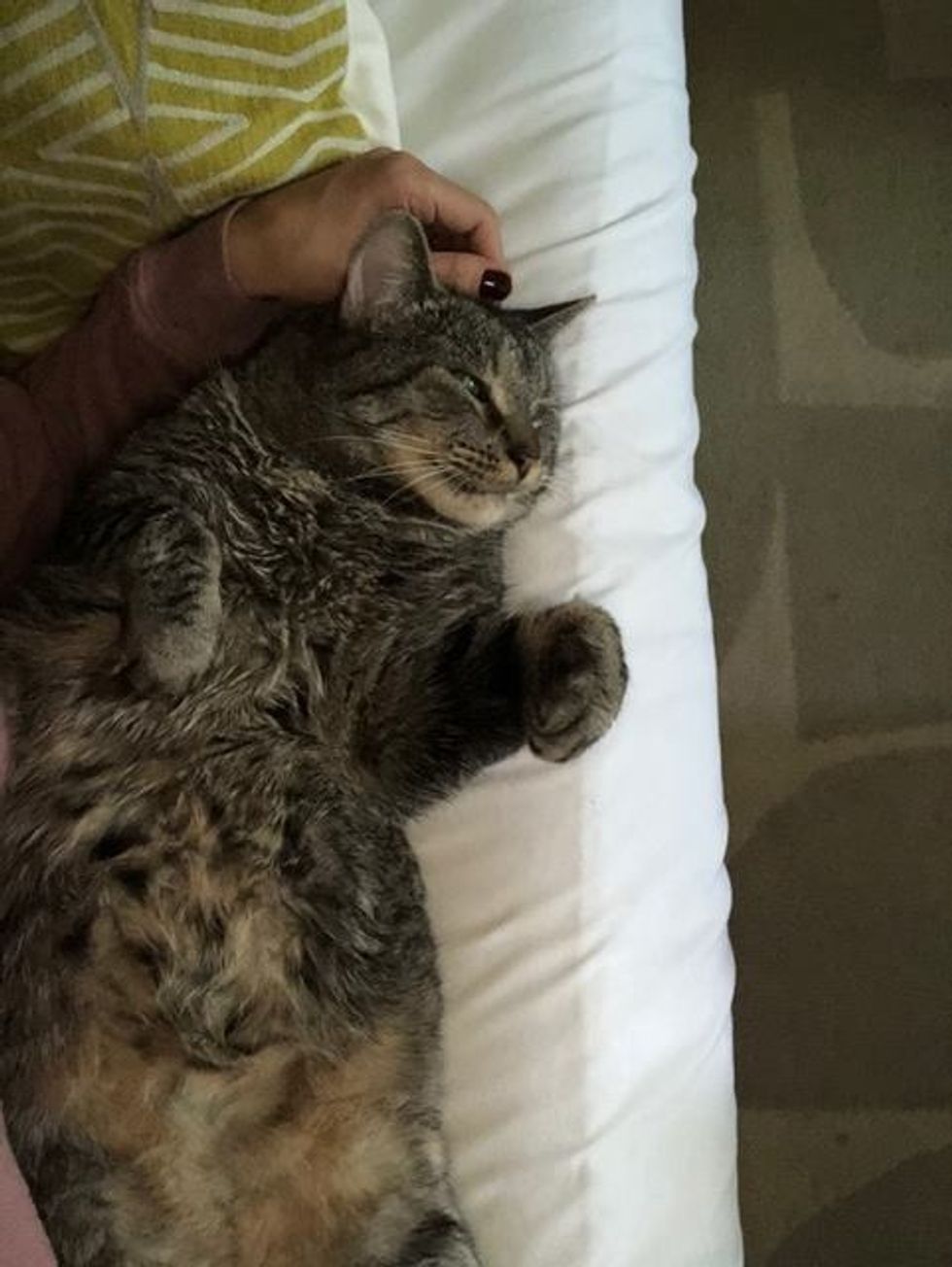