Terry from Wisconsin came to Safe Haven Pet Sanctuary in Green Bay, Wisconsin six months ago, and he just kept coming back.

When he returned, he didn't come empty-handed. 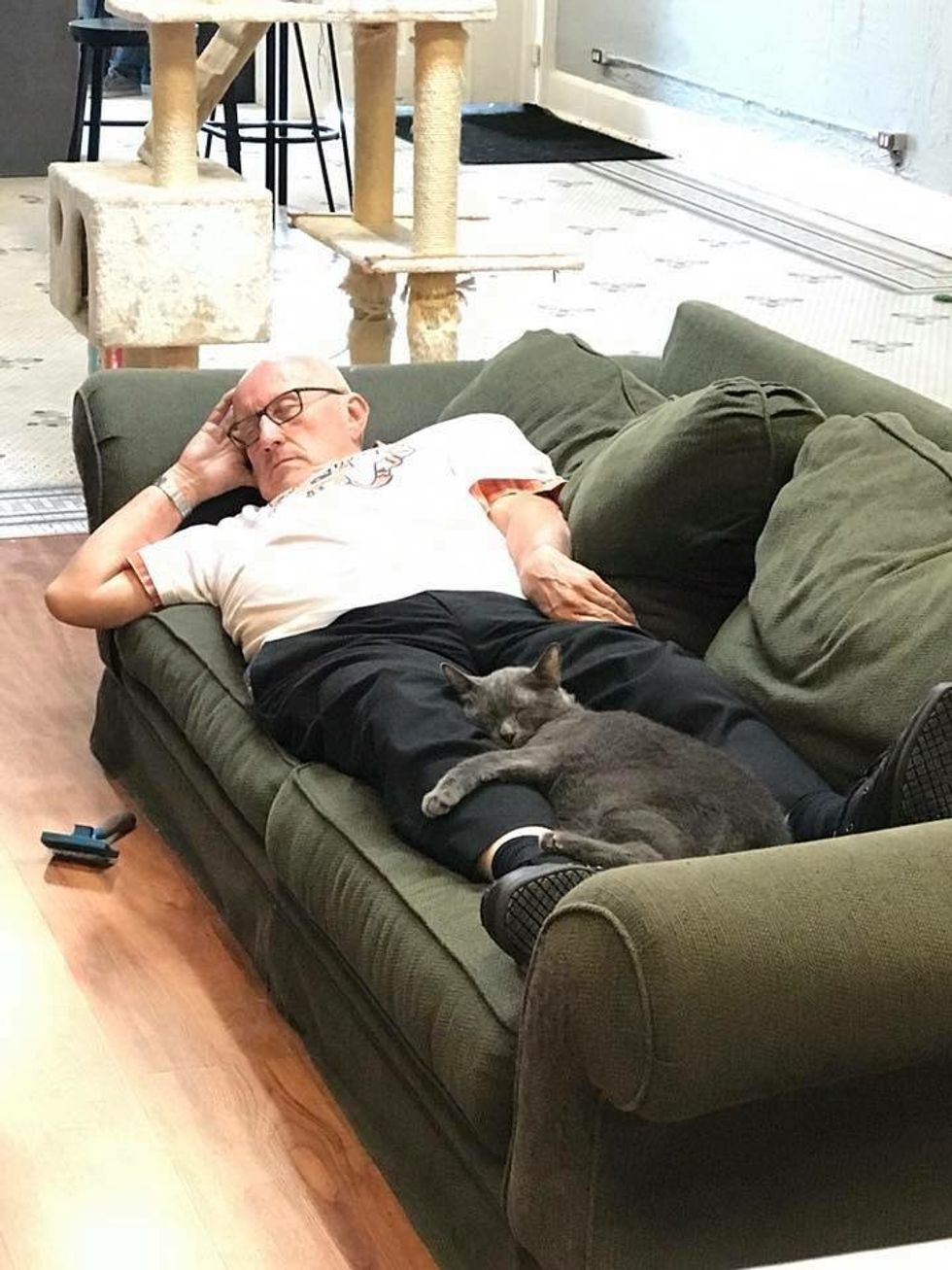 He brought his very own trusty brush so he could help groom the feline residents there, but little did he know that his regularly visits quickly became an adorable fixture at the sanctuary.

When Terry heard about the cage-free, no-kill cat shelter, which specializes in rescuing kitties with physical or psychological disabilities, he wanted to do something for the residents there. 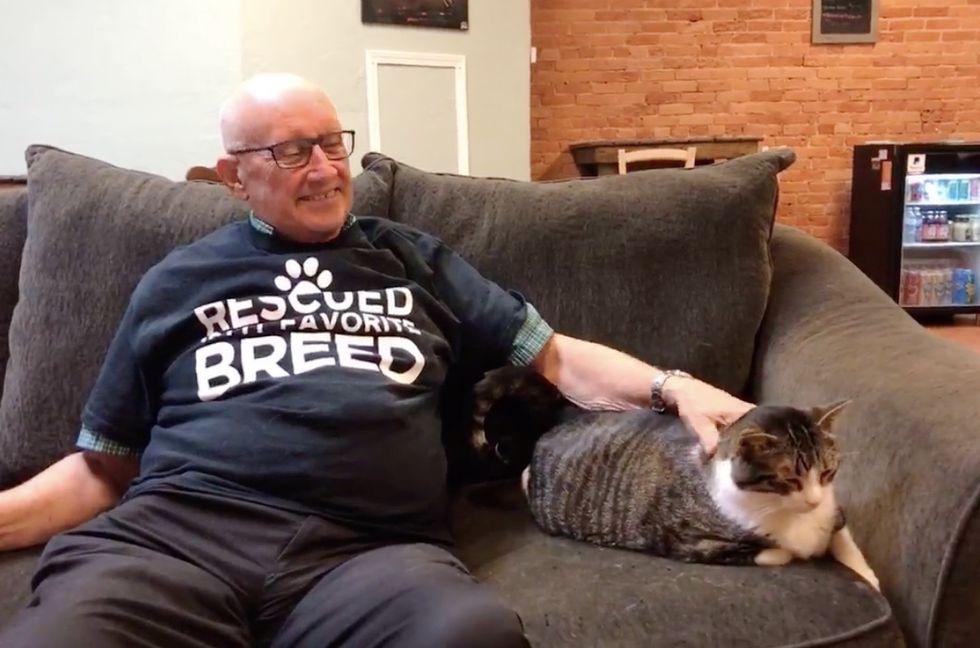 Terry loves animals and naps. He doesn't have any pets of his own, but every time he comes to the sanctuary, he has this charm about him that calms even the most nervous cat.

"He brushes all of the cats, and can tell you about all of their likes and dislikes. He also accidentally falls asleep most days," Elizabeth added. 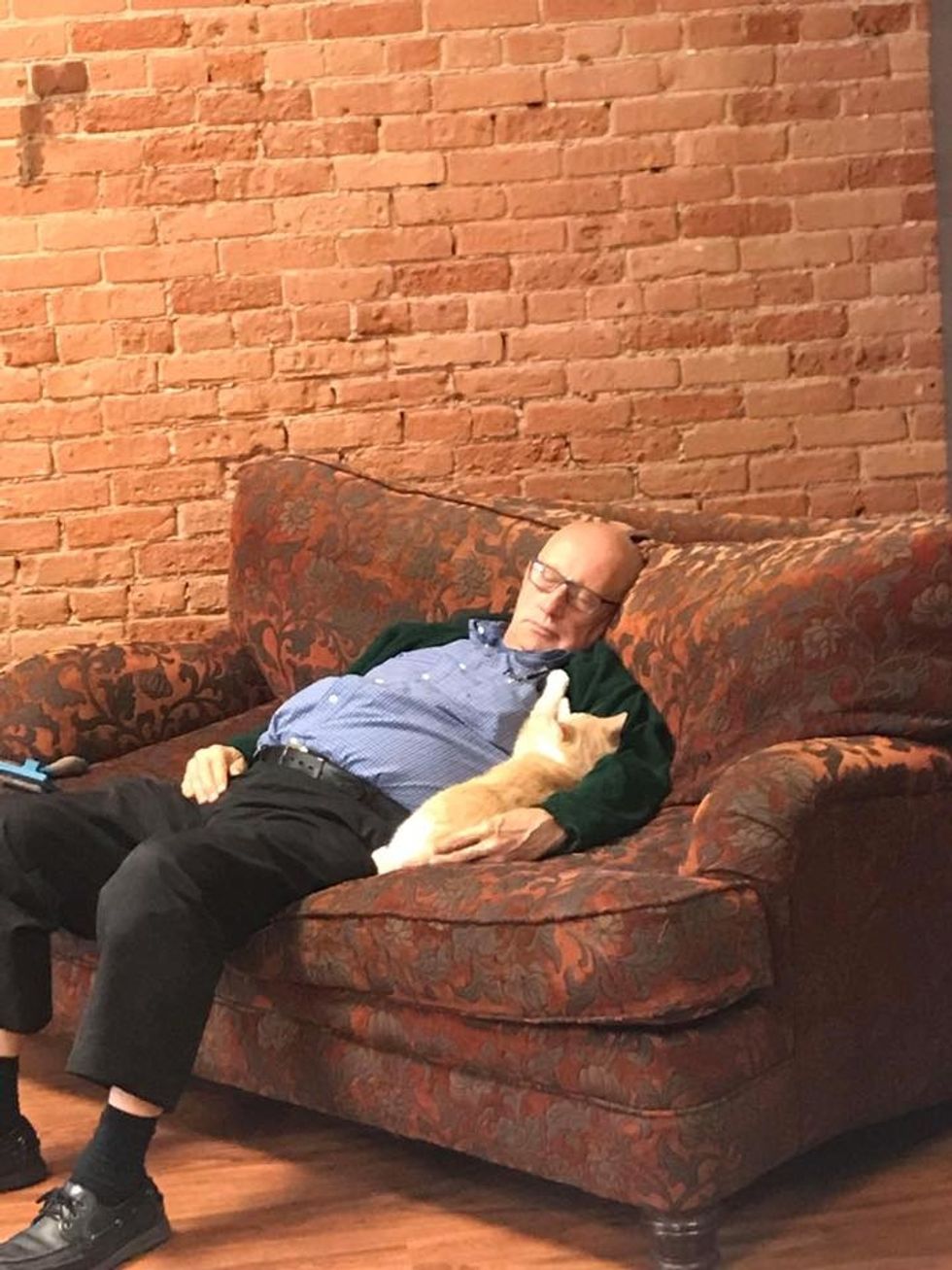 "Terry ended up becoming a volunteer because he was just around all the time! He'd show up with his own brush, and brush cats," Elizabeth said. "After he got to know all of the cats and their needs, he began asking to help out more."

He became the shelter's official volunteer and has never missed a day helping out at the sanctuary. 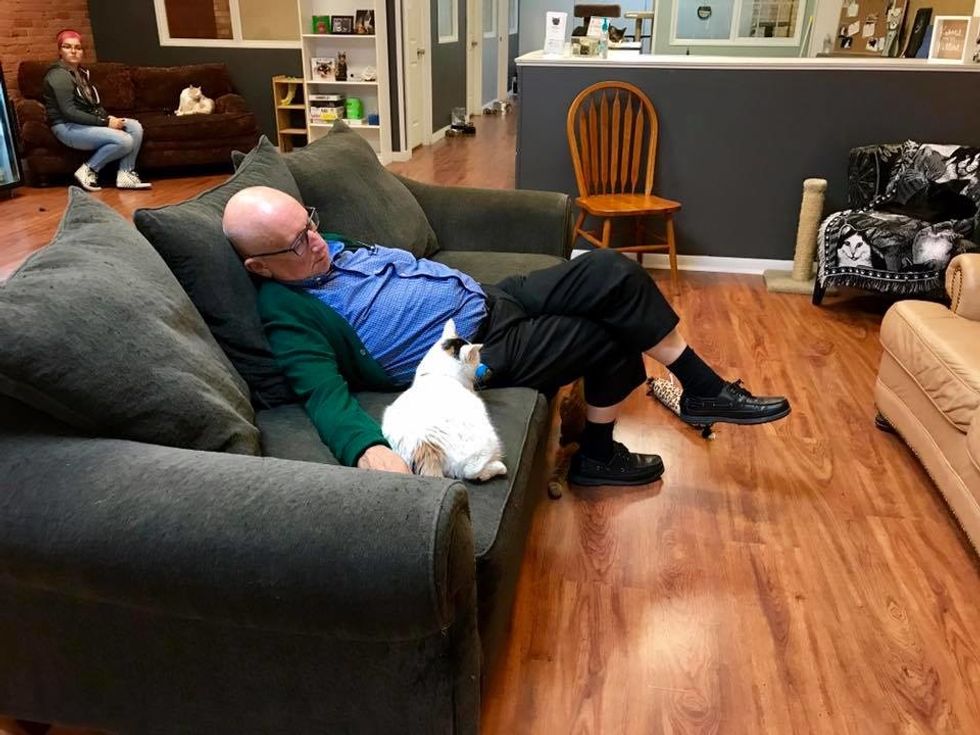 "When he comes in he usually takes turns brushing all the cats with his special brush, and will give them all a treat or two. He falls asleep while sitting with the cats quite a bit, and then he'll wake up and keep on brushing," Elizabeth told Love Meow.

He spends a lot of time with Buckhorn, who is very anxious and will hide under the couch or desk. He and his best friend Shane get passed up a lot, because nobody even knows they're there. 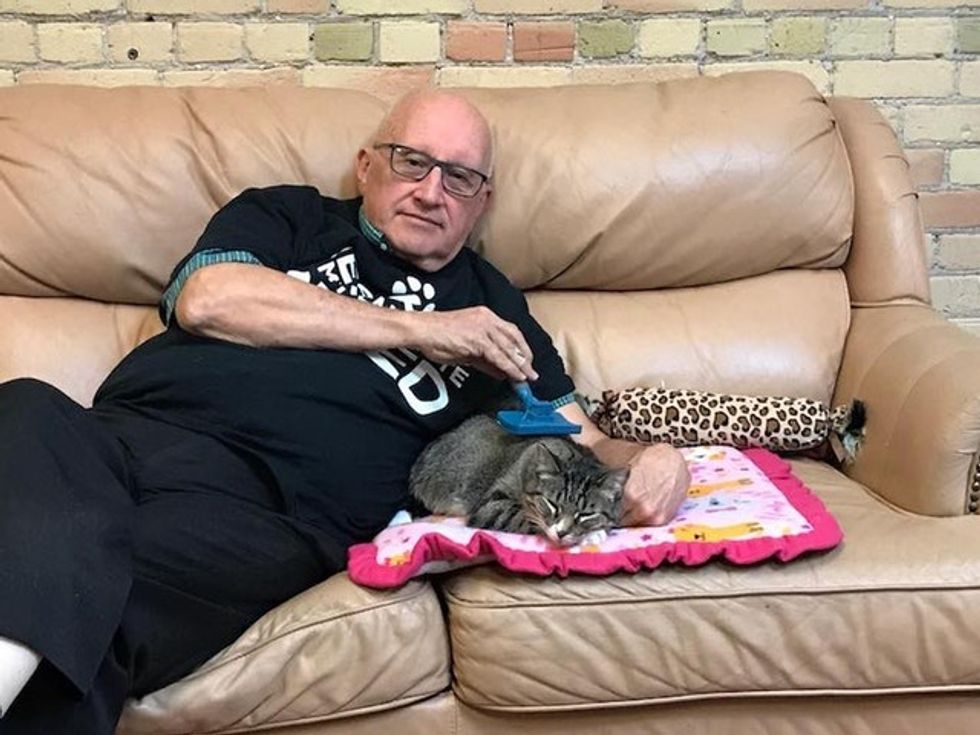 Terry sits with the tabby cat on the couch, brushing him and falling asleep together with him. He makes sure that every animal at the rescue feels loved, and no one is left out on their own.

When the sanctuary shared photos of Terry napping with his feline friends, the internet fell in love with him. 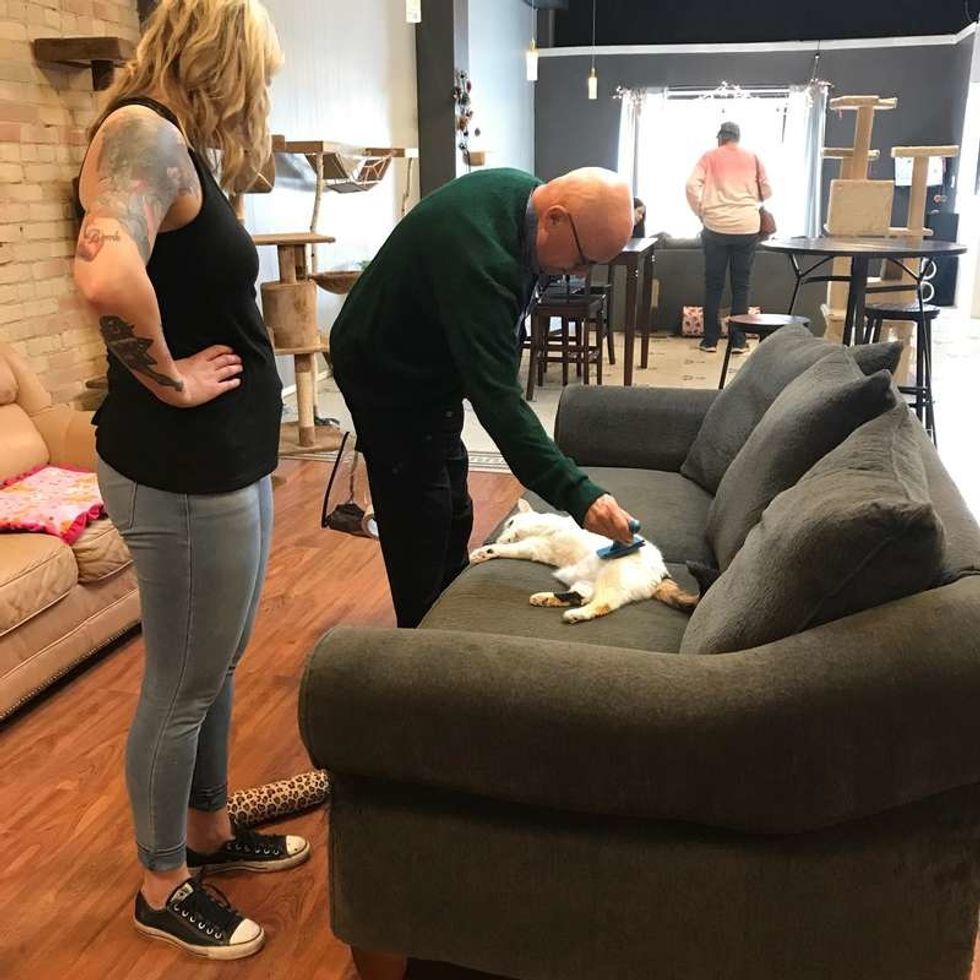 Some wrote poems about him and even started calling him the Cat Grandpa.

"I fall asleep a lot, but I never felt that this was going to happen," Terry said. "Cat Grandpa is a good name." 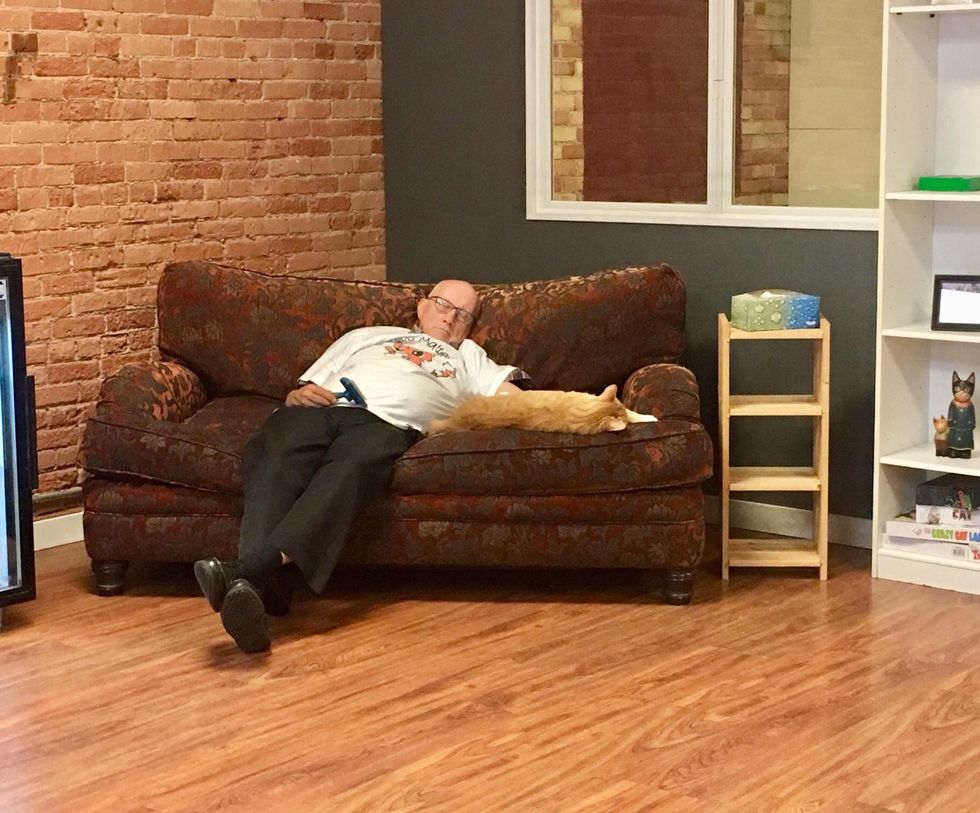