Grandpa Cat Helps Kittens Who Were Found Abandoned in a Box, and Shows Them Love

Five kittens who were abandoned next to a dumpster, found a grandpa cat to love on. 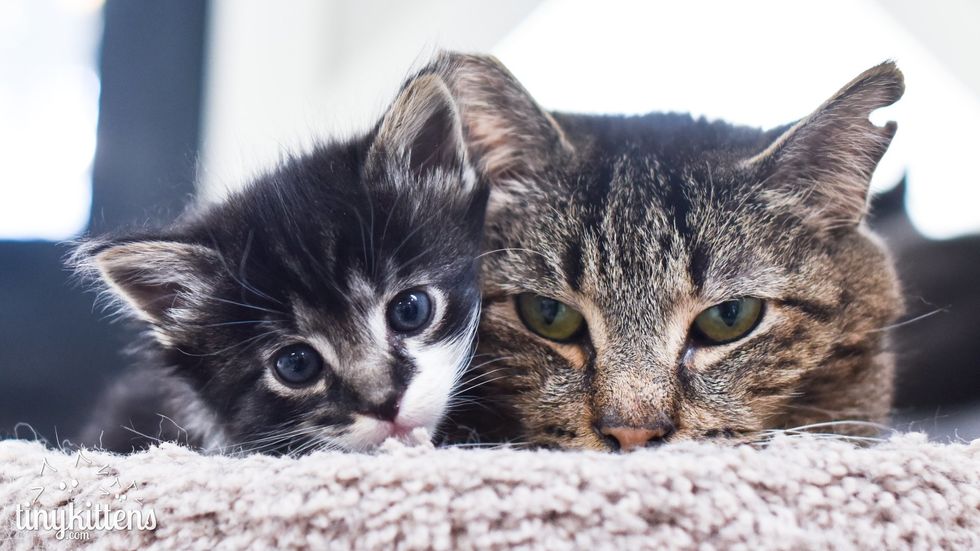 TinyKittens, a rescue group based in Fort Langley, British Columbia, was contacted about a litter of kittens needing rescue. A Good Samaritan heard them crying during a rain storm and found them in a cardboard box by a dumpster.

Rescuers immediately went to pick them up. The kittens were just four weeks old, meowing and begging for attention and pets when help arrived.

Shelly Roche, founder of TinyKittens, took them into her care and set them up in her living room. The little bundles of fur were named after flowers (Snowdrop⁣, Snapdragon⁣, Azalea⁣, Clary Sage⁣, and Dahlia⁣), in honor of their beloved rescued cat Stanlily. 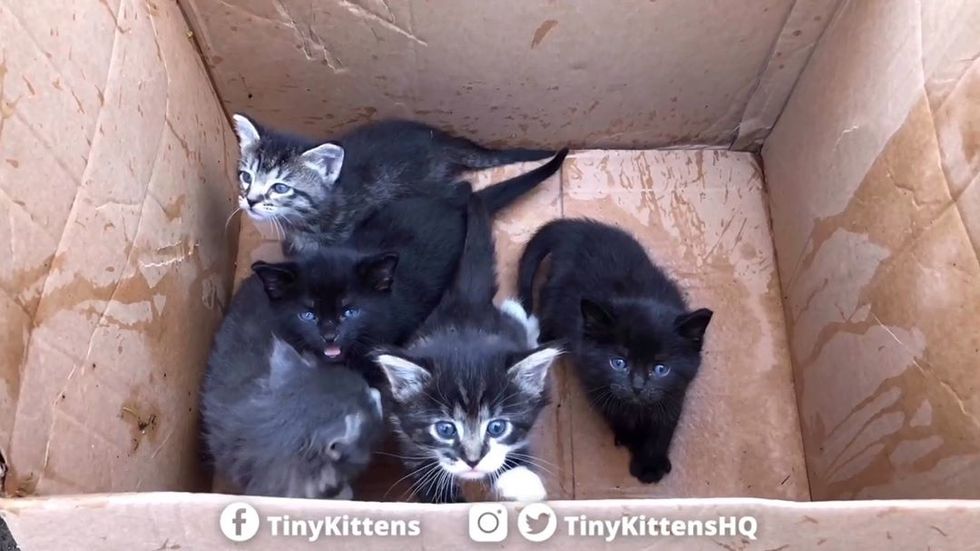 The kittens were healthy, friendly and at good weights. They appeared to have had human contact prior to being rescued. "Luckily, they found their way to us, and are now safe and warm, with full bellies," TinyKittens said.

After a long ordeal, the kittens were treated and fed, and they drifted off to a nap together in a purr pile. 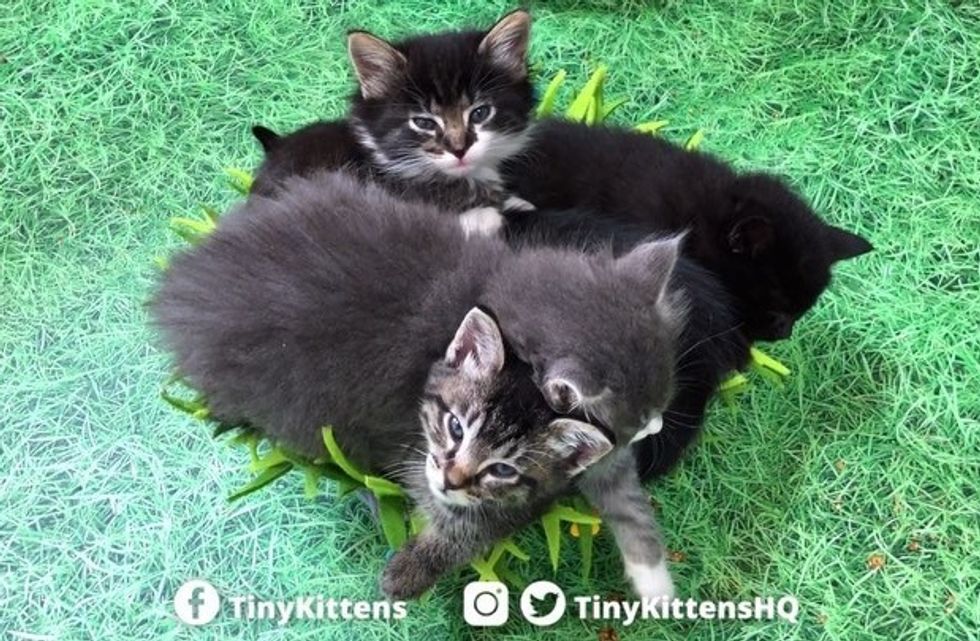 The feline siblings stayed close together the whole time, keeping each other comforted.

Their resident cat, Grandpa Mason, who was rescued as a feral but turned out to be the most loving grandpa to kittens in need, came to offer the Flower kitties some much-needed TLC. 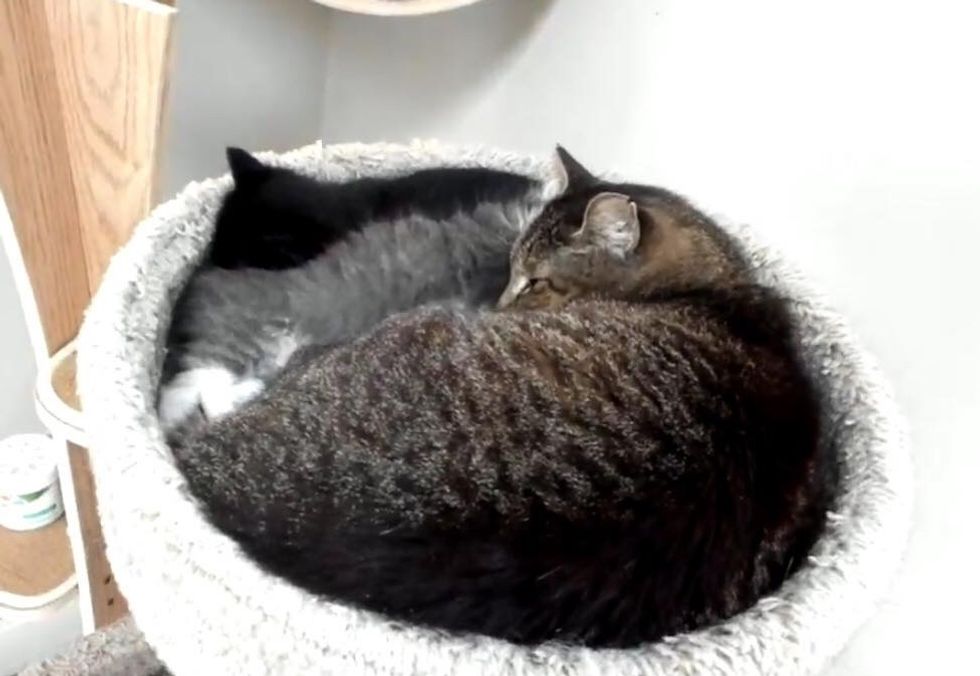 The sweet senior cat took to his new fosters right away. He squeezed in their bed to snuggle with the youngsters and started grooming them one after another, showering them with love.

The kittens turned into mush and purred up a storm while Grandpa diligently kept them clean and well groomed. 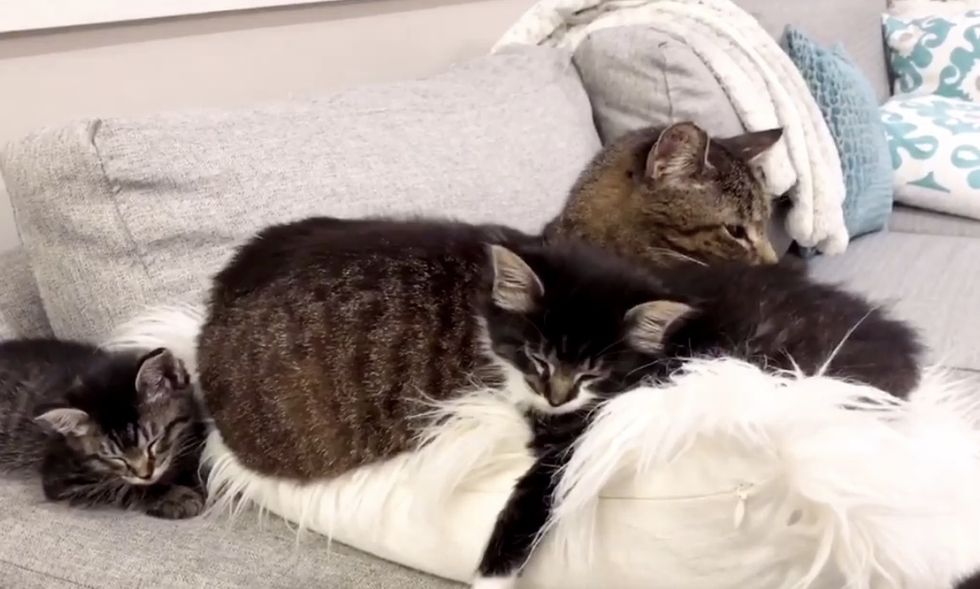 Auracuda, another rescued kitty at TinyKIttens and Mason's number one protégé, came to join the cuddle-fest.

She was unimpressed by the kittens at first, but seeing how Mason cared for the little ones, she decided to follow in his paw-steps. 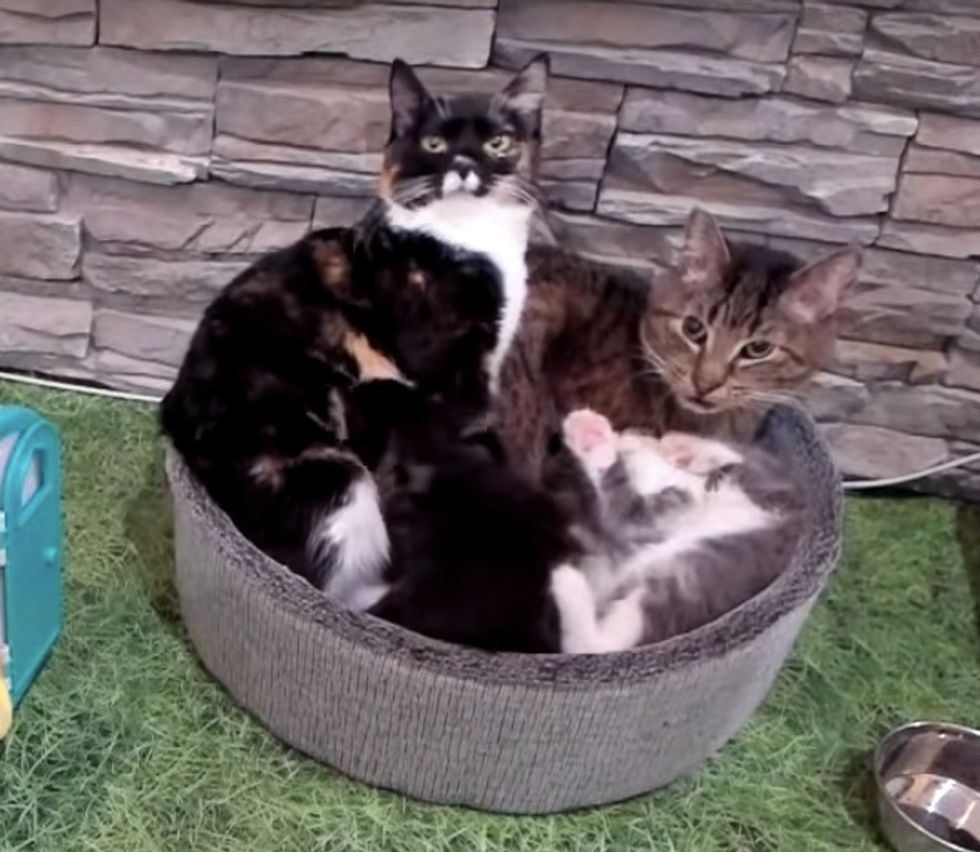 Aura cuddles with Grandpa Mason and the kittensTinykittens

The kittens are reminded of their mom when they are with Grandpa and even start comfort-nursing on him.

Watch Grandpa Mason and his foster kittens in this video:

Grandpa cat helps kittens who were found in a box - TinyKittensyoutu.be

Despite having no milk supply, Grandpa doesn't mind it at all and purrs alongside with the kittens. 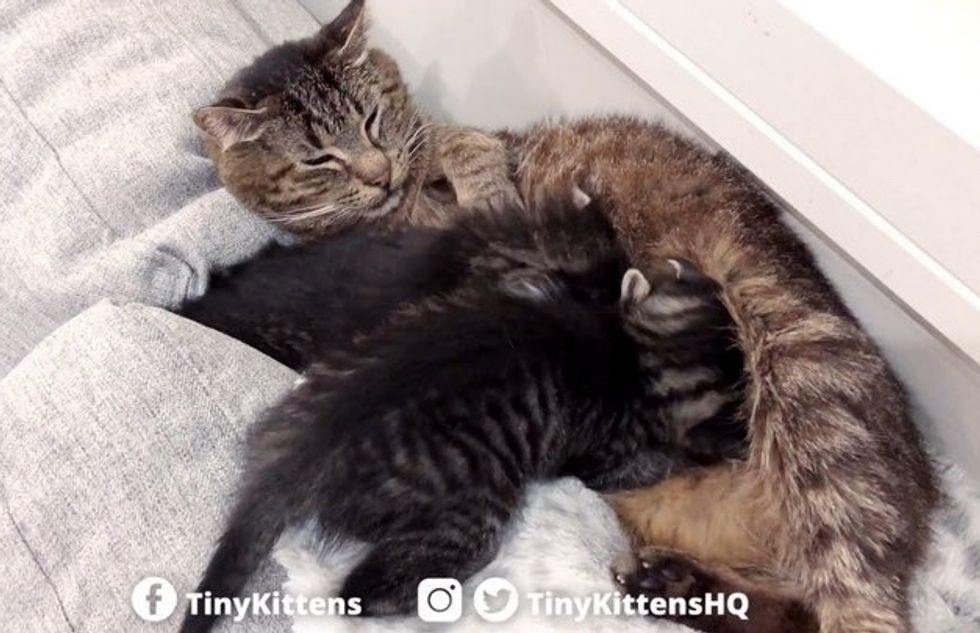 Grandpa Mason and Dahlia and AzaleaTinykittens

With his help, the kittens are thriving and getting ready for their next chapter of life - their forever homes. 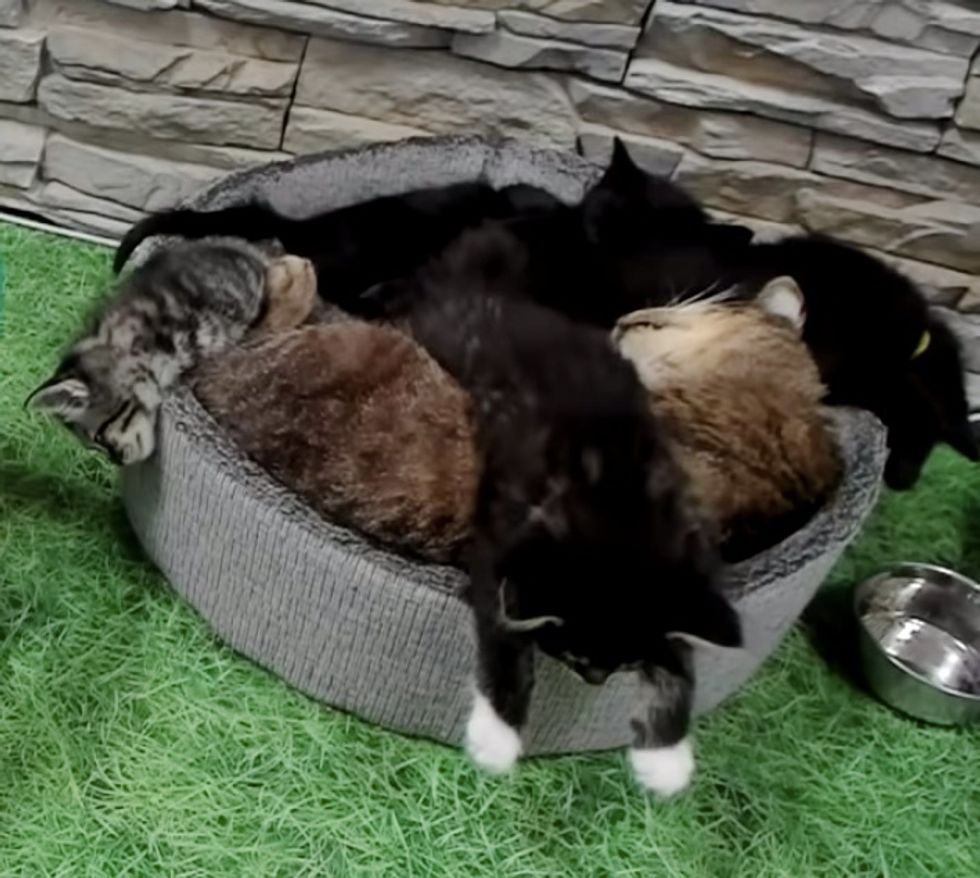 It's been three weeks since they were rescued from an uncertain fate. The kittens have grown by leaps and bounds.

Grandpa Mason is so proud! 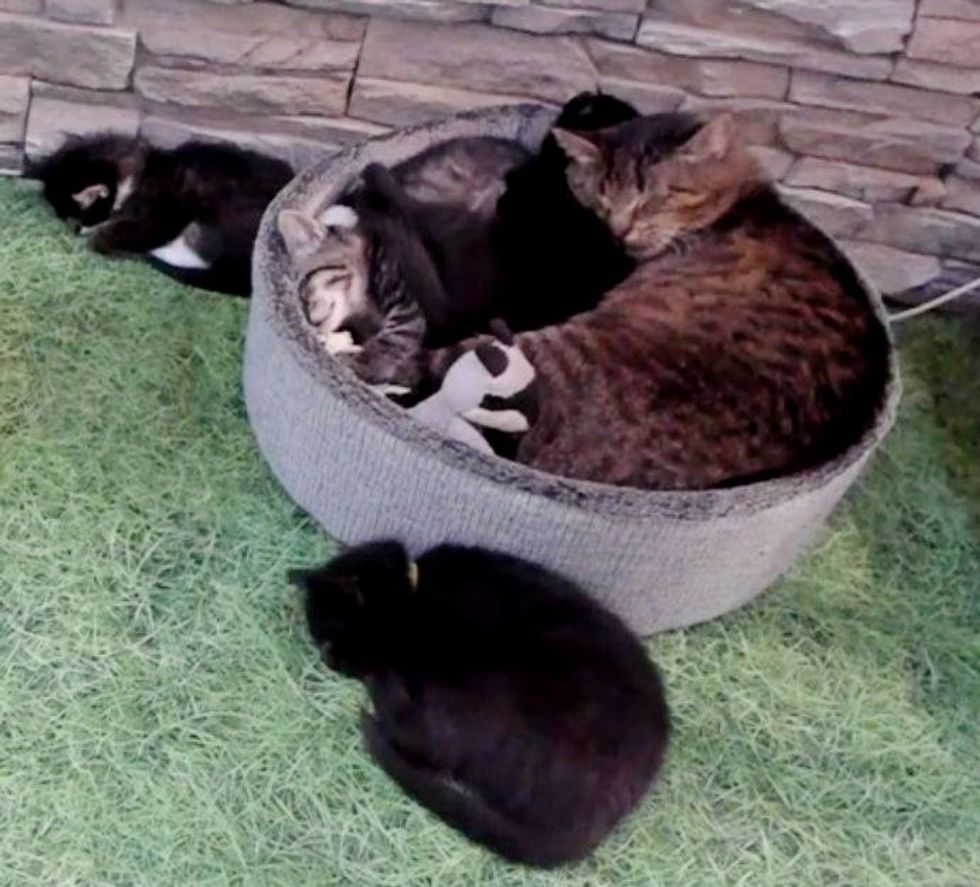