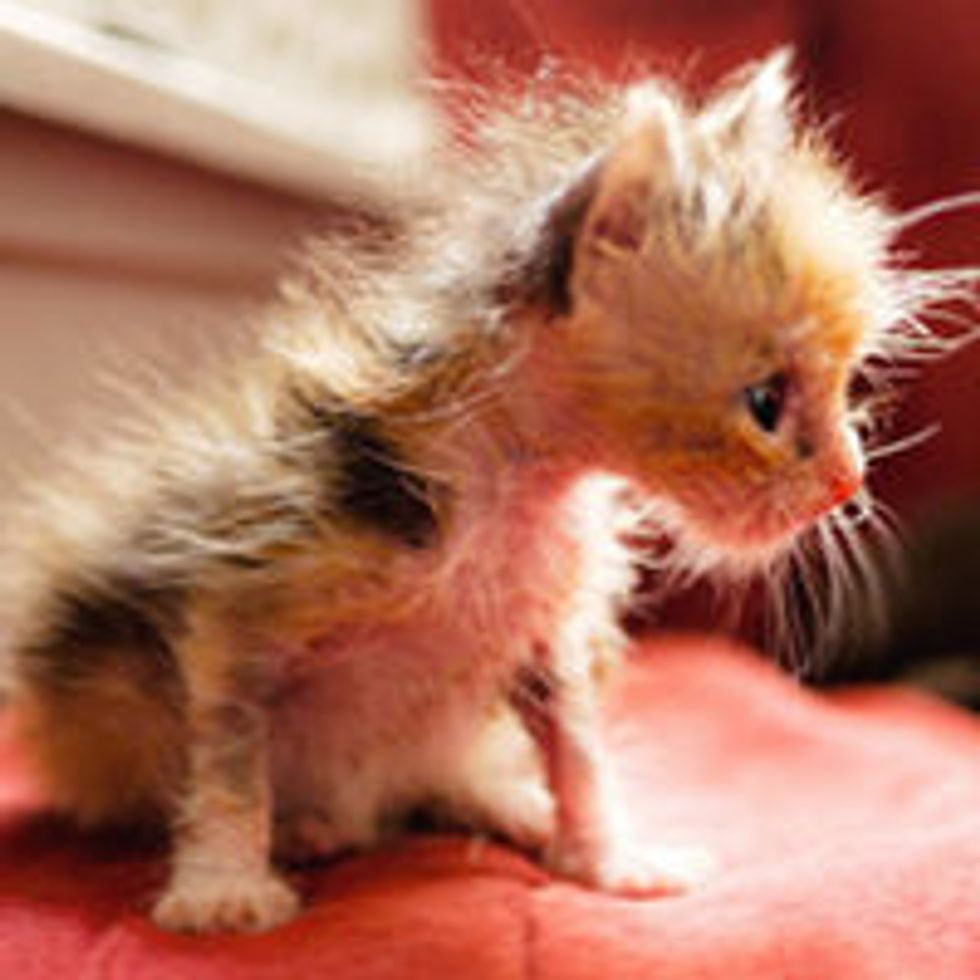 Daisy the Coyote Kitty and Her Amazing Transformation

This is Daisy, she is one of the 4 starving kitties survived a coyote attack and were taken in by the CATS Cradle Shelter in Fargo, North Dakota. She was just 5 weeks old and weighed in only 6 ounces. "You can see by her bulging eye sockets and thinning hair that she would not have lasted much longer, not to mention that at 5 weeks she should weigh about 1 1/4 pounds not 6 ounces," wrote CATS Cradle Shelter on Facebook.

Their mother didn't make it after trying to protect them from the coyote attack. "We immediately put them all on KMR and a 'Recovery' wet food… We also have dry kitten kibble, softened with KMR. After 4 days with one of our fosters, Daisy has gained 1.5 ounces, the largest kitten gained 2.5 ounces and the other 2 gained between 1 and 2 ounces. They are now more active and playful." They were messy little eaters and Daisy sometimes looked as if she took a swim in her formula.

When little Daisy and her siblings went for their second checkup, the vet was pleased with their progress thanks to the loving care of their foster mom Lori and her family and Romeo, the family's English Sheepdog who "has stepped up to surrogate parent these little orphans."

The shelter recently reported that all four kitties have been adopted together! "They will be sharing their home with their foster canine brother Romeo forever. Lori and her husband have decided that they just cannot part with them and they are now officially adopted." With their help and love, Daisy and her litter mates have made an amazing transformation from "the wee little malnourished pumpkins into the gorgeous kittens they have grown into," said the shelter. And Daisy despite still being the smallest kitty in her litter, she's now 11 weeks old at 1.54 pounds. "Pretty impressive considering she was a mere 6 ounces at 5 weeks of age."

"We got these babies just in time, I do not believe they would have survived more than another day or so. I am so thrilled with how great they look now, barely recognizable from their former selves."

Checking out the dish washer

At 7 weeks old, Daisy is bigger and healthier

Daisy and her litter mates today! All adopted together!

Daisy, then and now