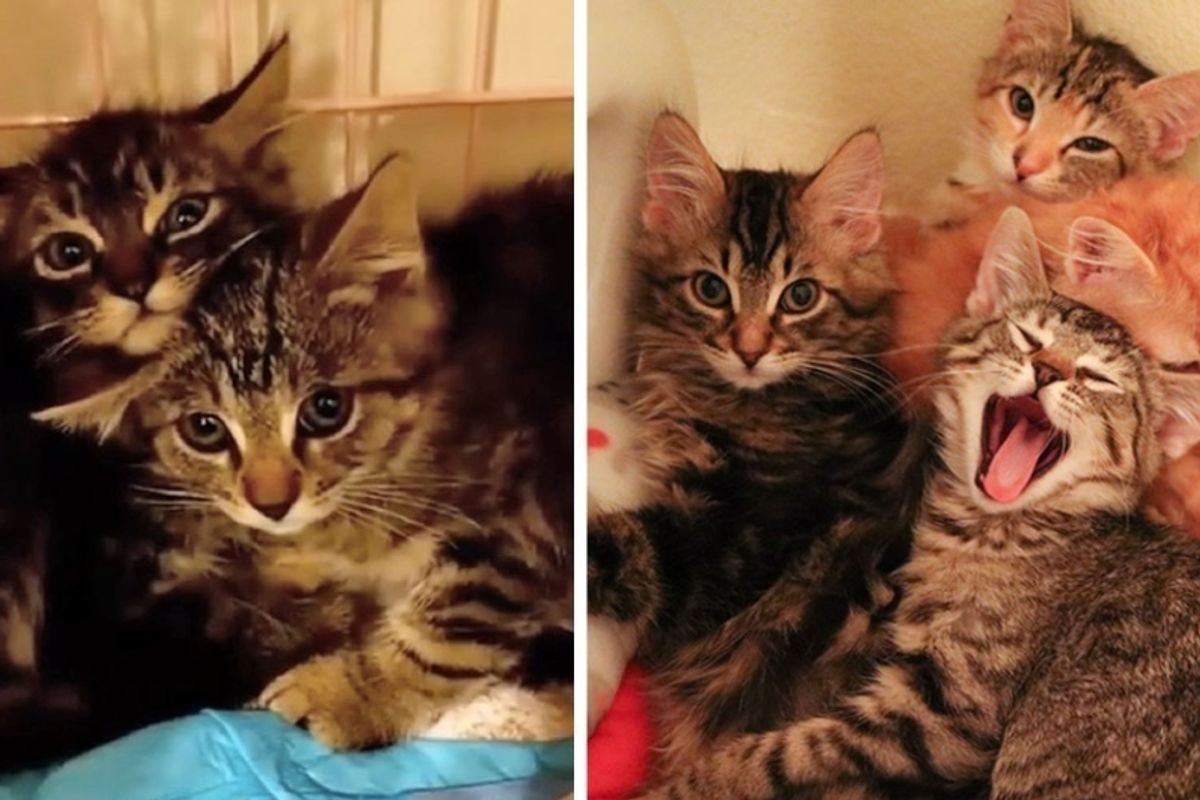 Feral Kittens Huddled Up in Fear Until They Discovered Cuddles - They Can't Stop Purring.

Local TNR (Trap-neuter-return) volunteers spotted two kittens wandering around with their cat mother in a neighborhood of Los Angeles.

"When they trapped the kittens, there was a surprise." 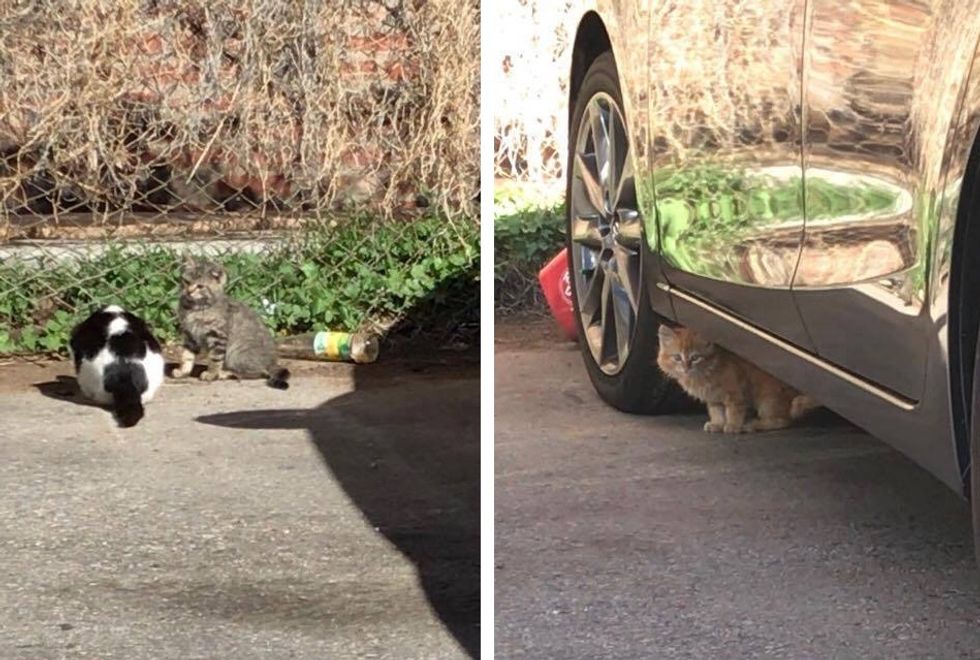 A few weeks ago, Jacqueline DeAmor, co-founder of Friends for Life RescueNetwork came across an online post about two kittens needing rescue. She immediately offered to take them.

When rescuers of Luxepaws went to trap the feline family, they were expecting two kittens and their mama but were surprised by what they found - a total of five kittens, one female and four males.

The feral cat mother was spayed and released. The kittens were then taken to Friends for Life RescueNetwork. "During the first few days, they were frozen in fear. They stayed huddled in a mass of fluff and hissed every time I walked in the room, got close to the crate, or put my hand inside," Jacqueline told Love Meow.

They were named Harlem, Bronx, Lenox, Ellis, and Hudson. Harlem was especially fearful of humans. She would swat out of survival instinct when she saw anyone near her. 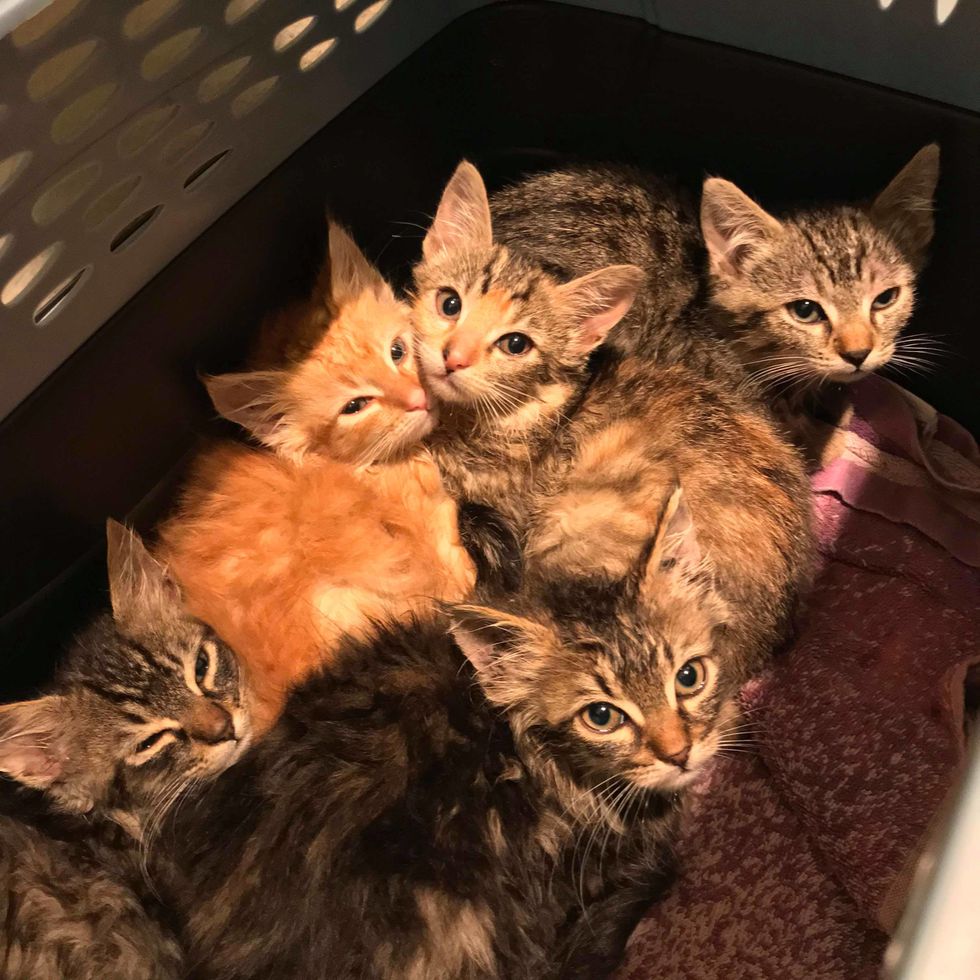 Over the next two weeks, they began taming and socializing the kittens with plenty of treats, food, and lots of "purrito" snuggles where a kitten was wrapped in a soft blanket and given snuggles and pets.

"They had their first purrito snuggles about a day after their rescue. They were wide eyed in fear. I could feel them shaking like a leaf," Jacqueline told Love Meow. 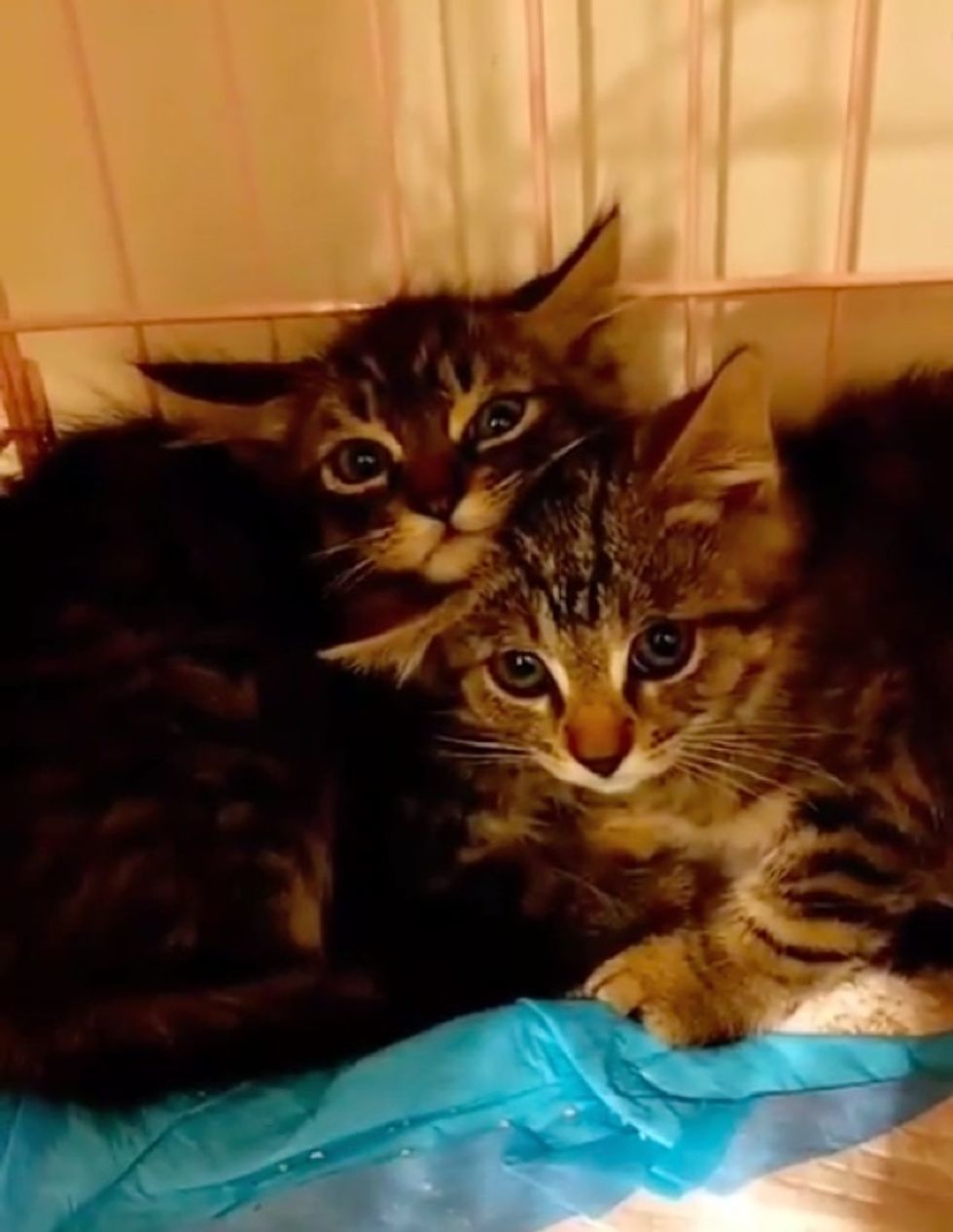 After about 5-10 minutes, the kittens would start squirming in an attempt to break free from the cuddle. That's when Jacqueline put them back to their "security" fur pile and went to socialize the next kitten with the same snuggle method.

"With lots of patience, love, attention, and food, they all started purring one by one. Ellis was the first one." (Scroll down for video) 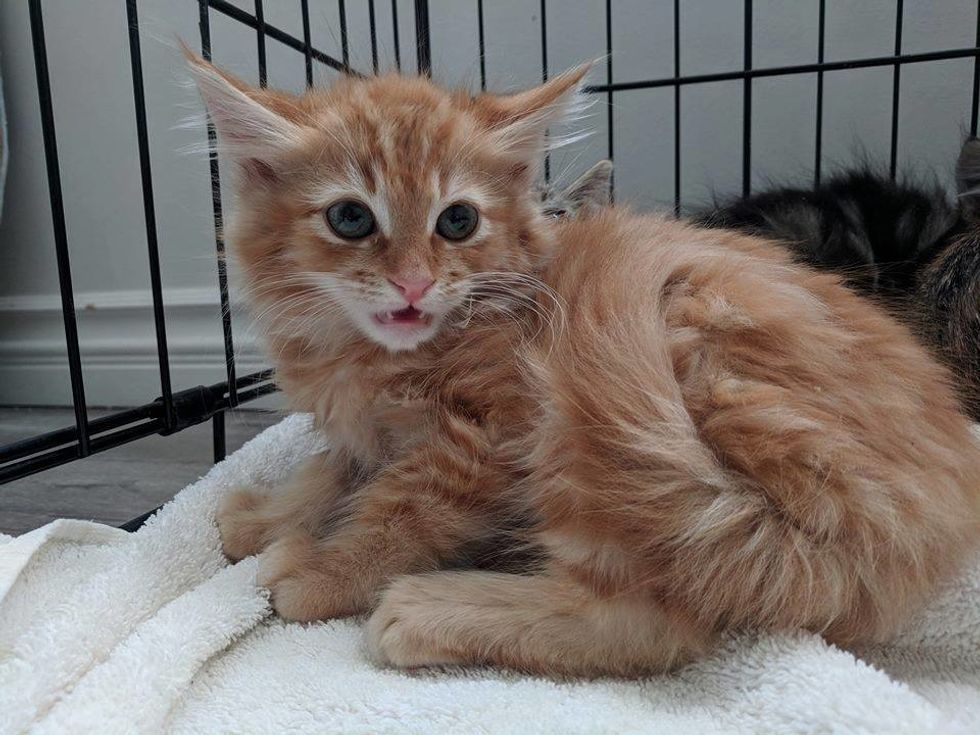 In three days, the feline siblings had gone from cowering in the corner, huddled up in a bunch to slowly becoming more comfortable with their caregiver around.

The kittens reached their first major milestone when they would eat in front of Jacqueline. "When they were super terrified, they would only eat when I wasn't in the room, but once they started to settle, they would creep forward for food, eyeing me wearily," Jacqueline told Love Meow. 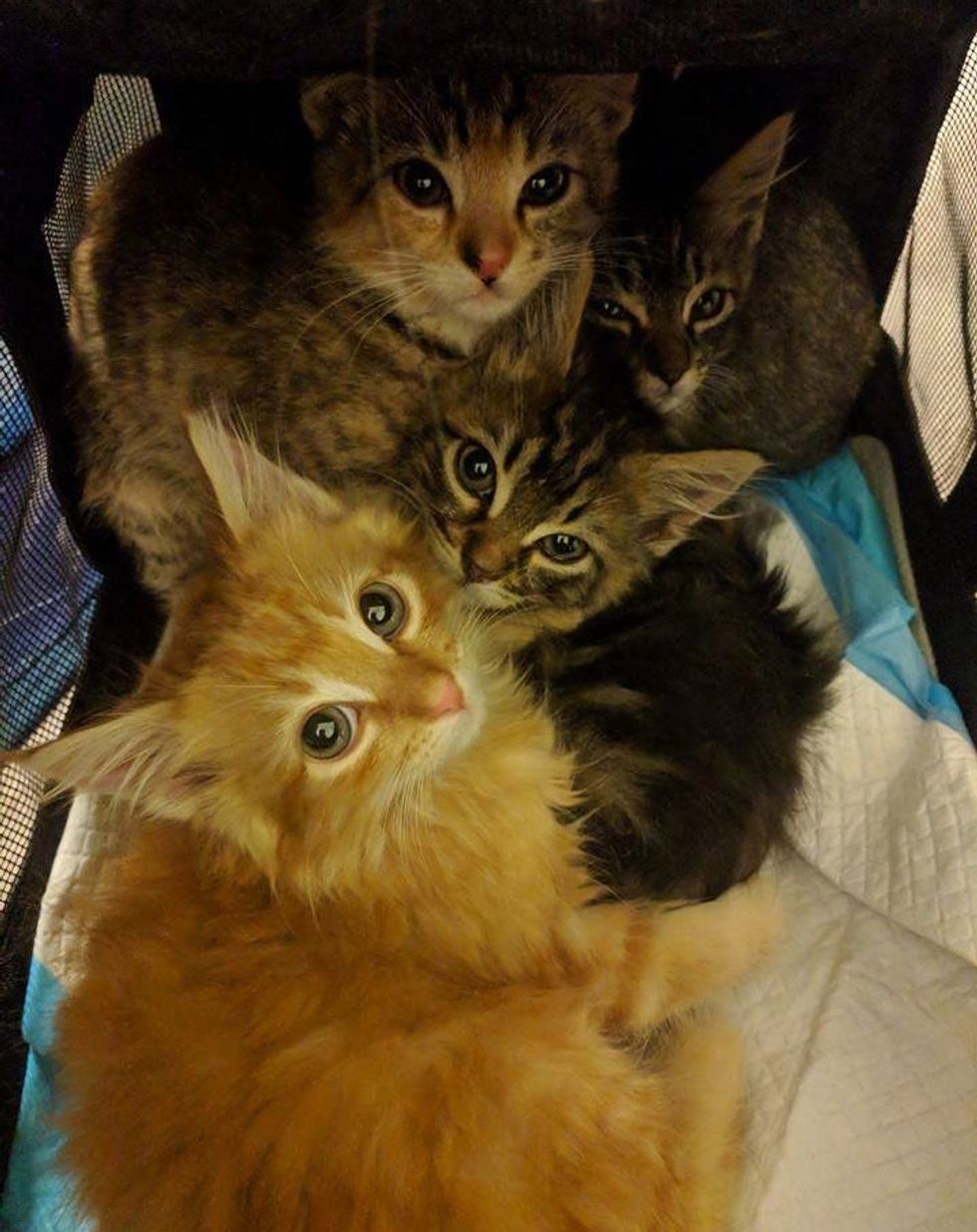 Raegan Carter, a foster carer from San Diego, took them in so they could learn to adjust to living in a home.

Soon after they moved in, all five of them took refuge under a chest of drawers in the bathroom. Raegan had to move it out of the room so she could get to the kittens and continue socializing them. 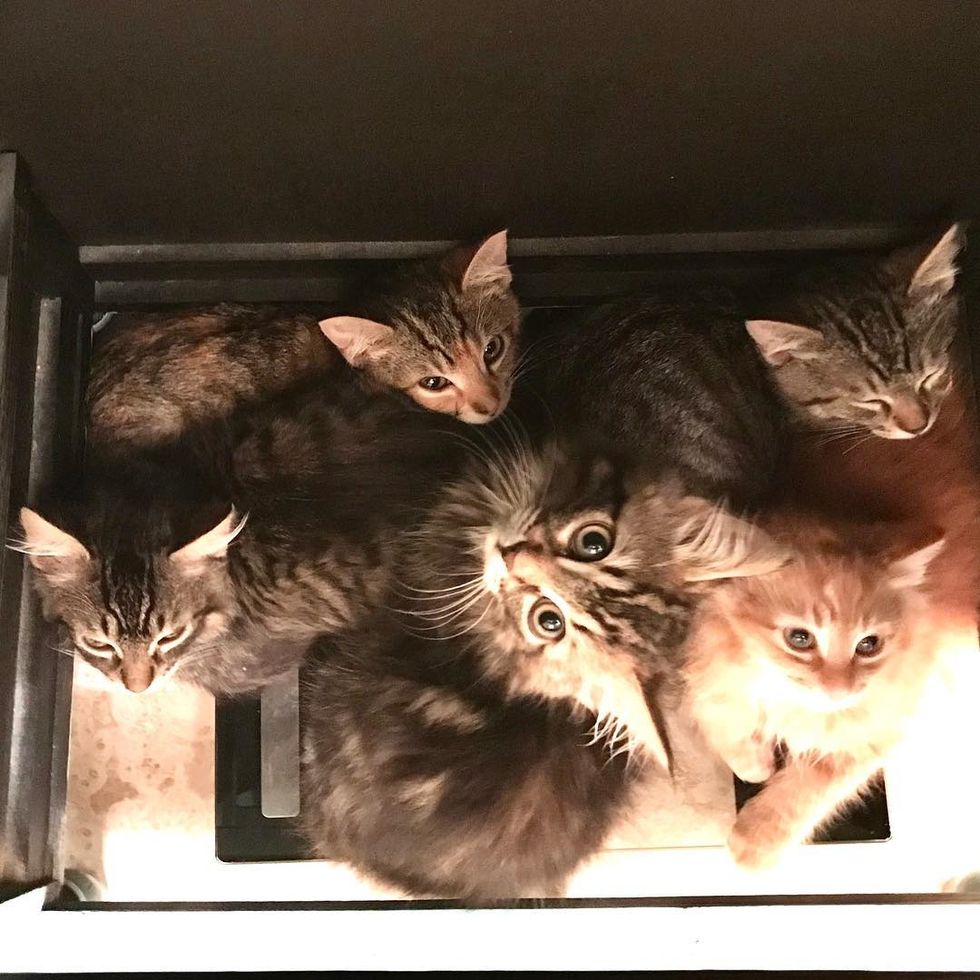 During the first few days, the kittens decided to stay in a pile behind the toilet in the bathroom despite all the room they were given.

They all fell asleep together, hiding behind their security block. 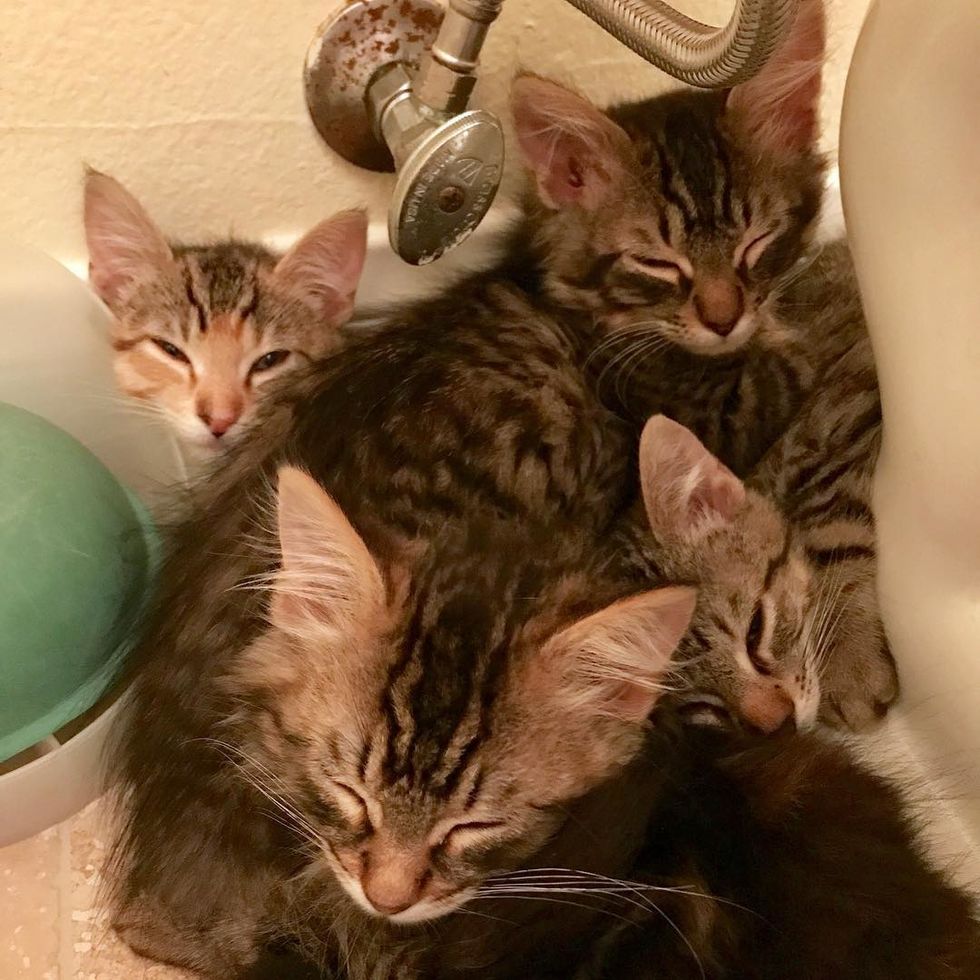 Lenox the fluffy tabby mustered enough courage to venture out of the kitten pile, but that didn't last long.

"He was terrified when I came toward him." 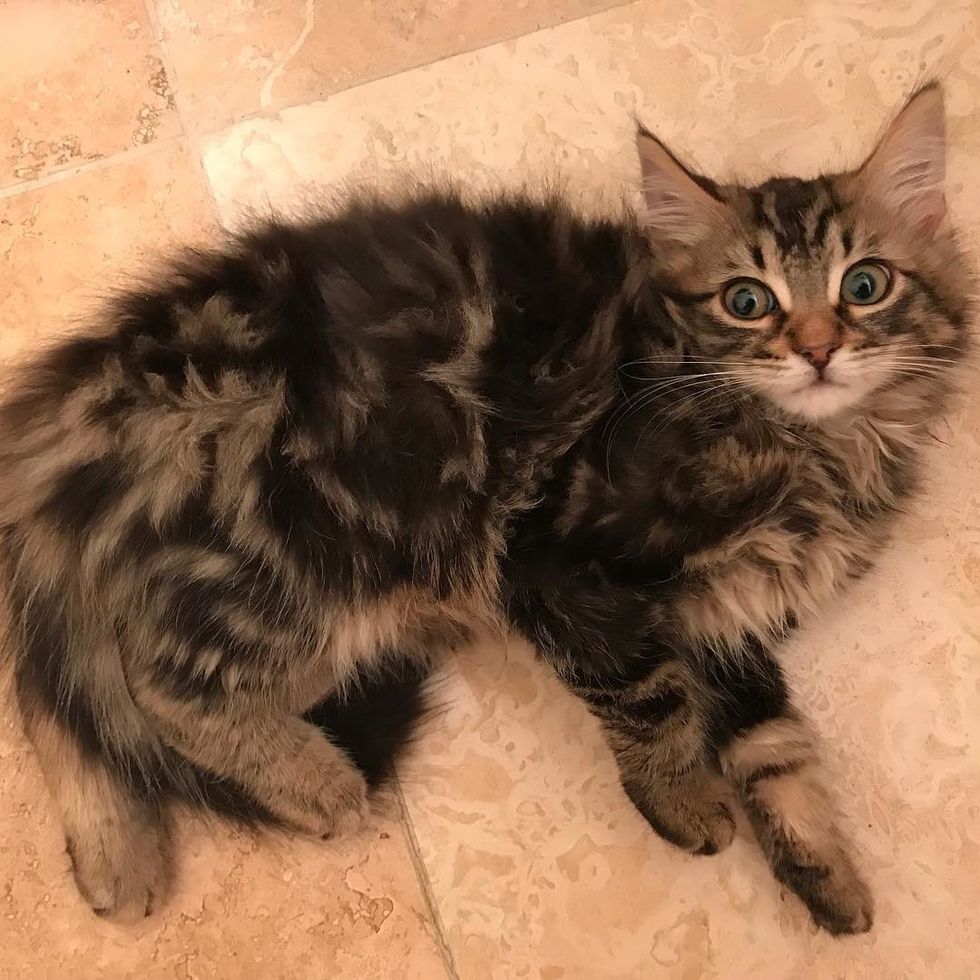 Raegan was hopeful that the kittens would come around. She continued to make herself present around the kittens, bringing them food, treats and lots of fun toys. Slowly but surely, the kittens started to come out of their shells. 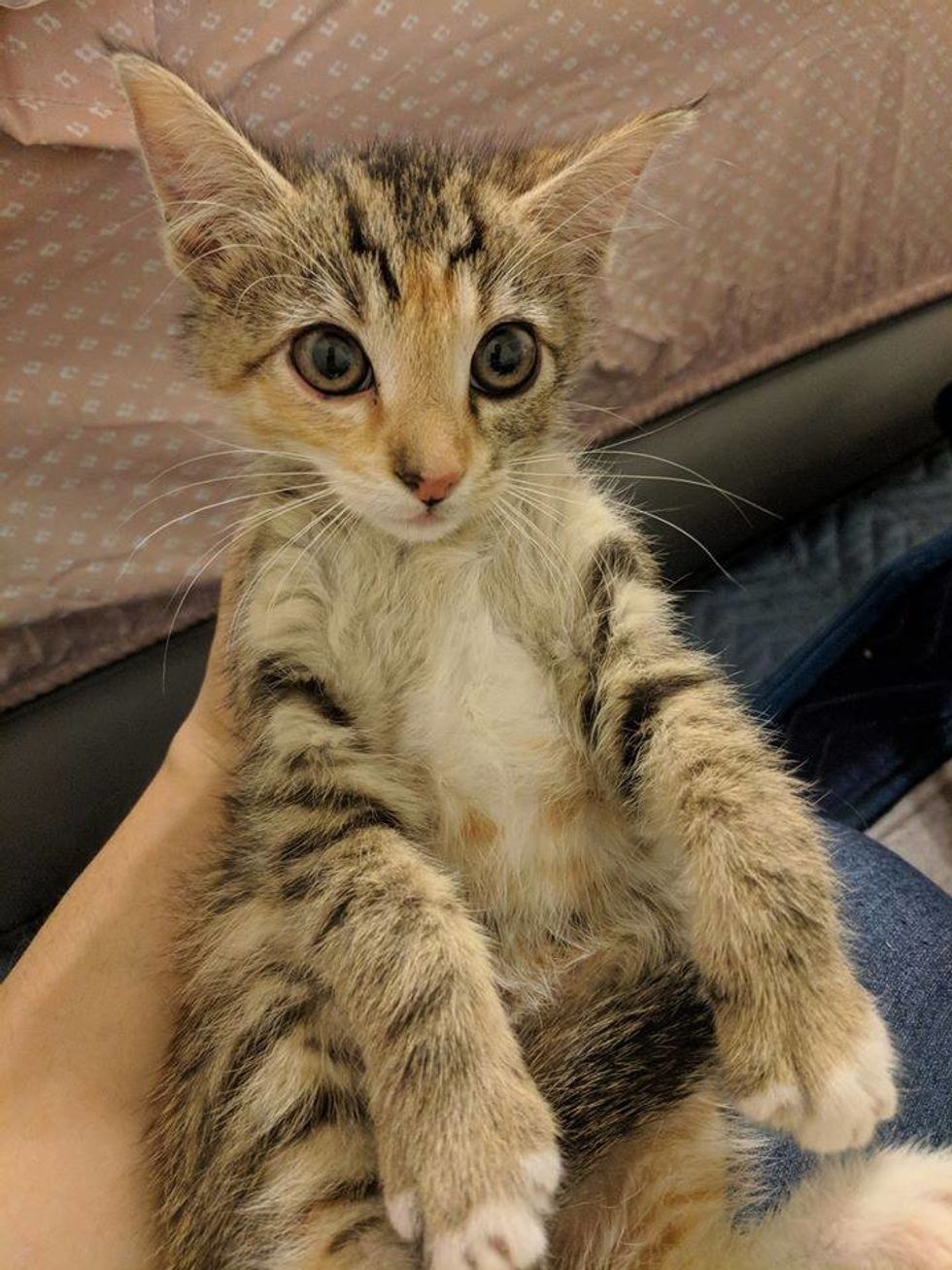 Ellis the ginger broke out of his shyness and crawled right into Raegan's lap.

He loved it so much that he would stretch out his little paws up and down in the air while purring up the storm. 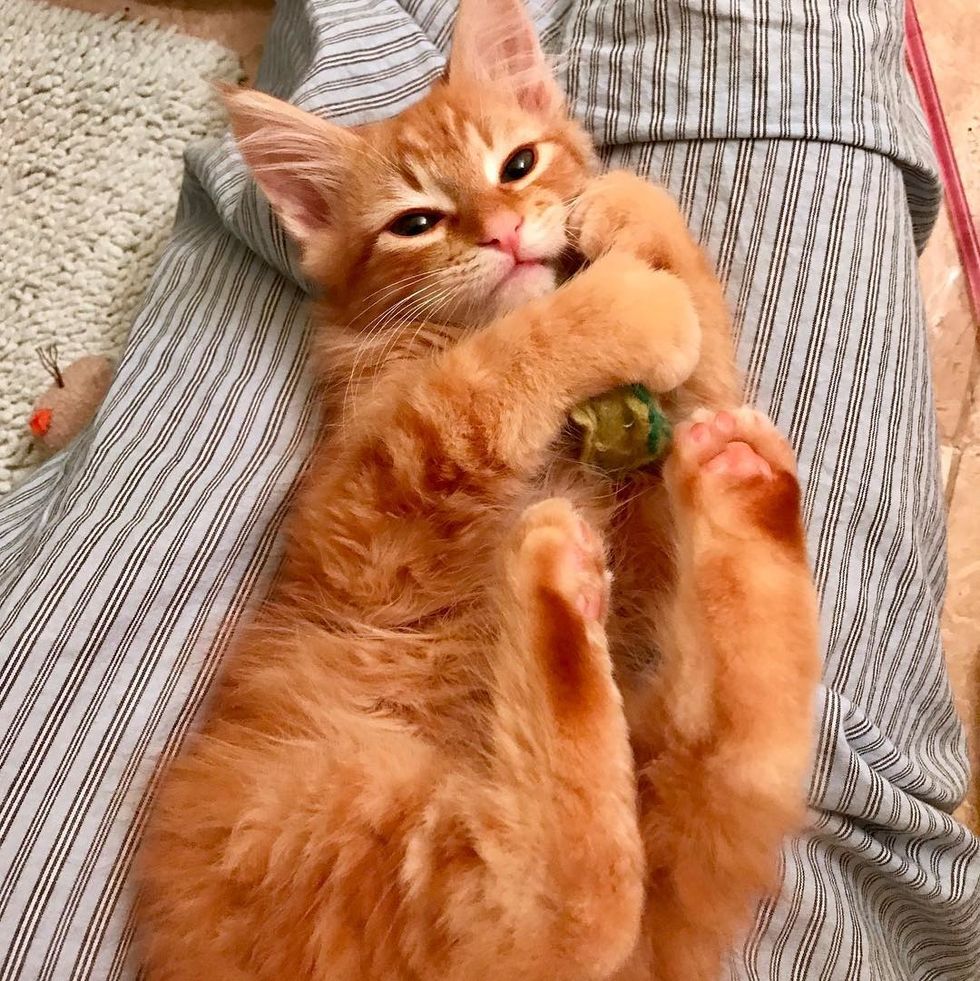 Then one after another, the kittens found themselves standing a bit taller, exploring the room without worries in their eyes, and purring a whole lot louder.

"I got hisses right when I walked in the room, but it was all purrs and head butts after they settled down," Raegan said. 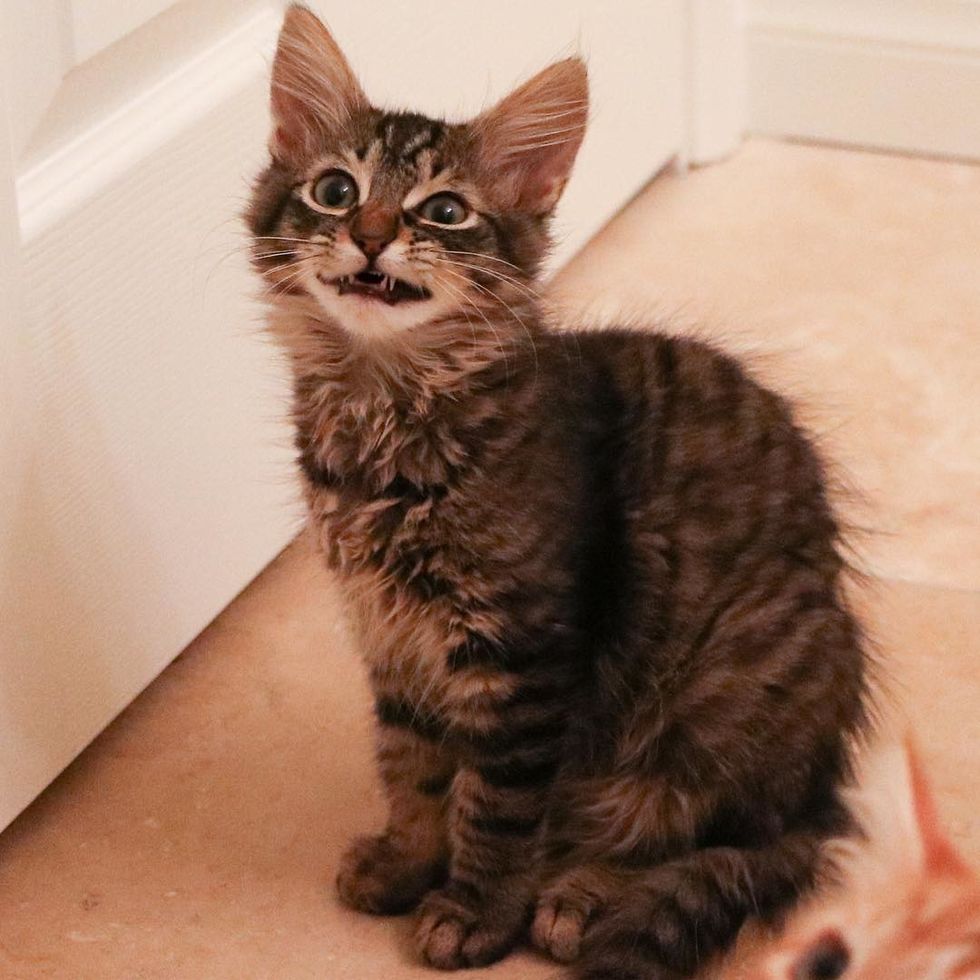 Hudson smiled at the camera before running up to his foster mom for some pets. 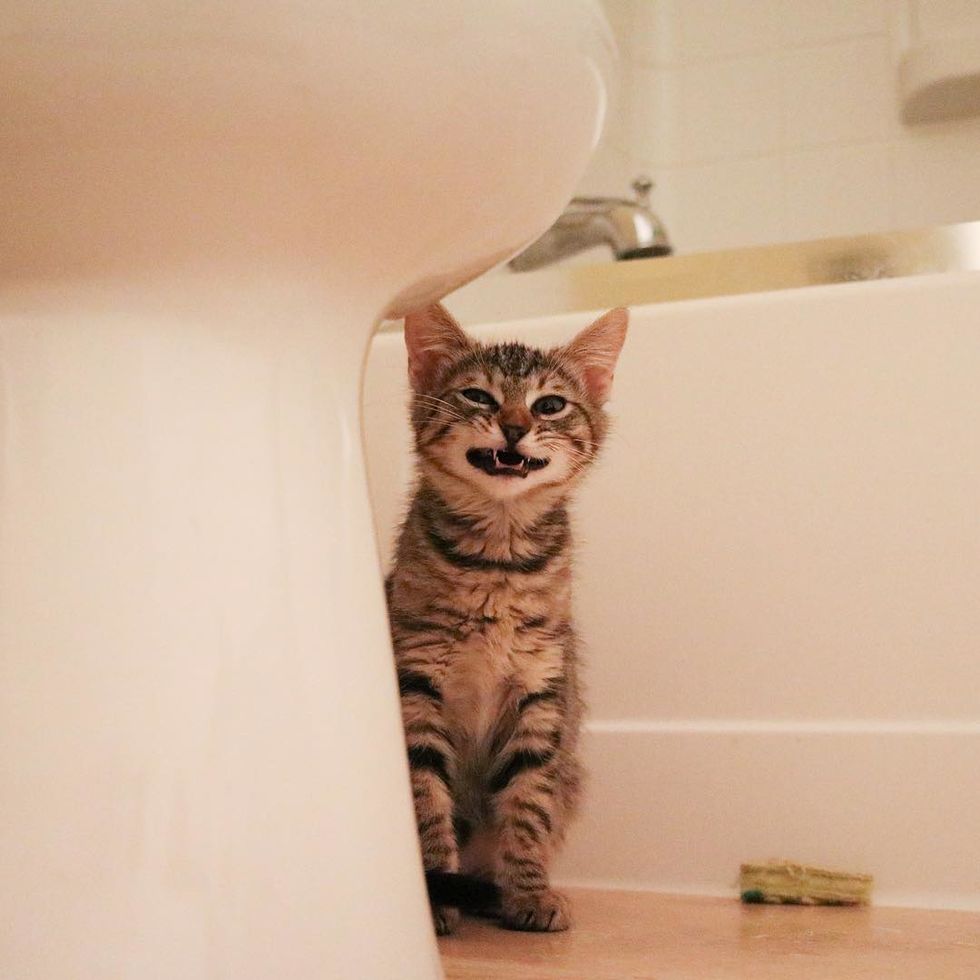 No more fear in their eyes. The five feline siblings have found their brand-new confidence, and they can't stop purring. 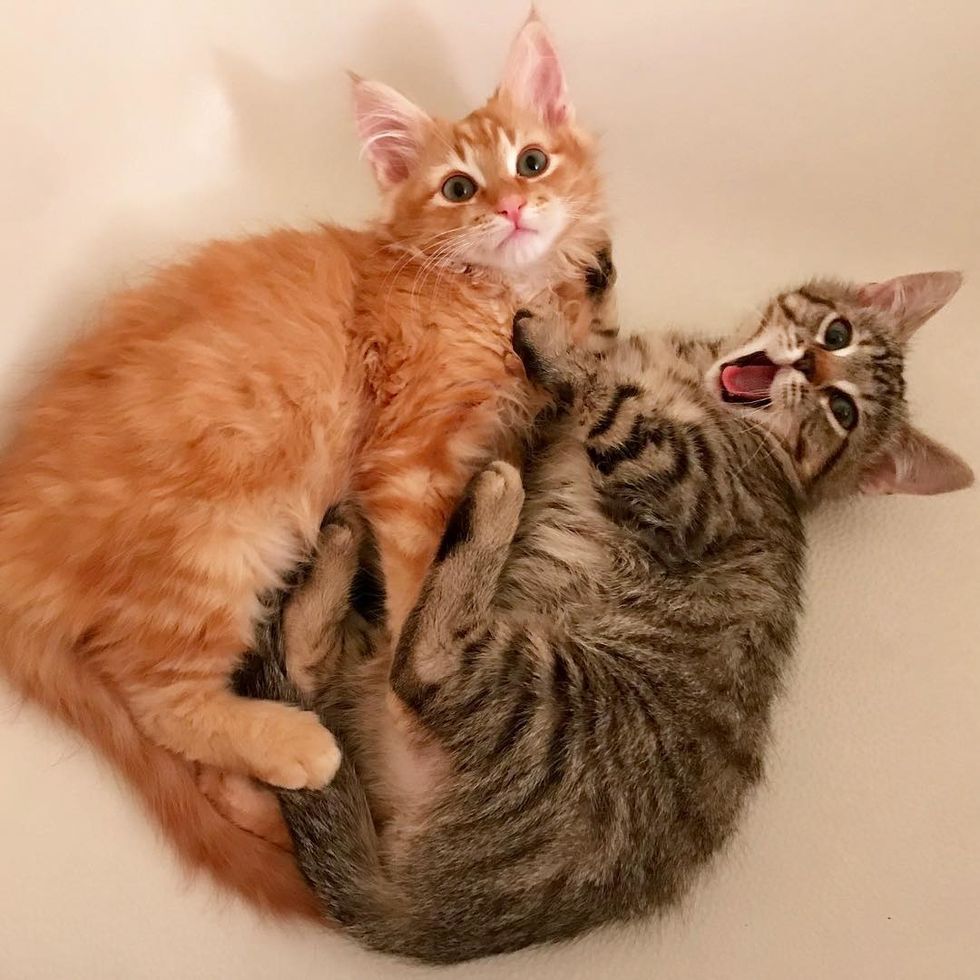 Watch these kittens' rescue journey in this video: