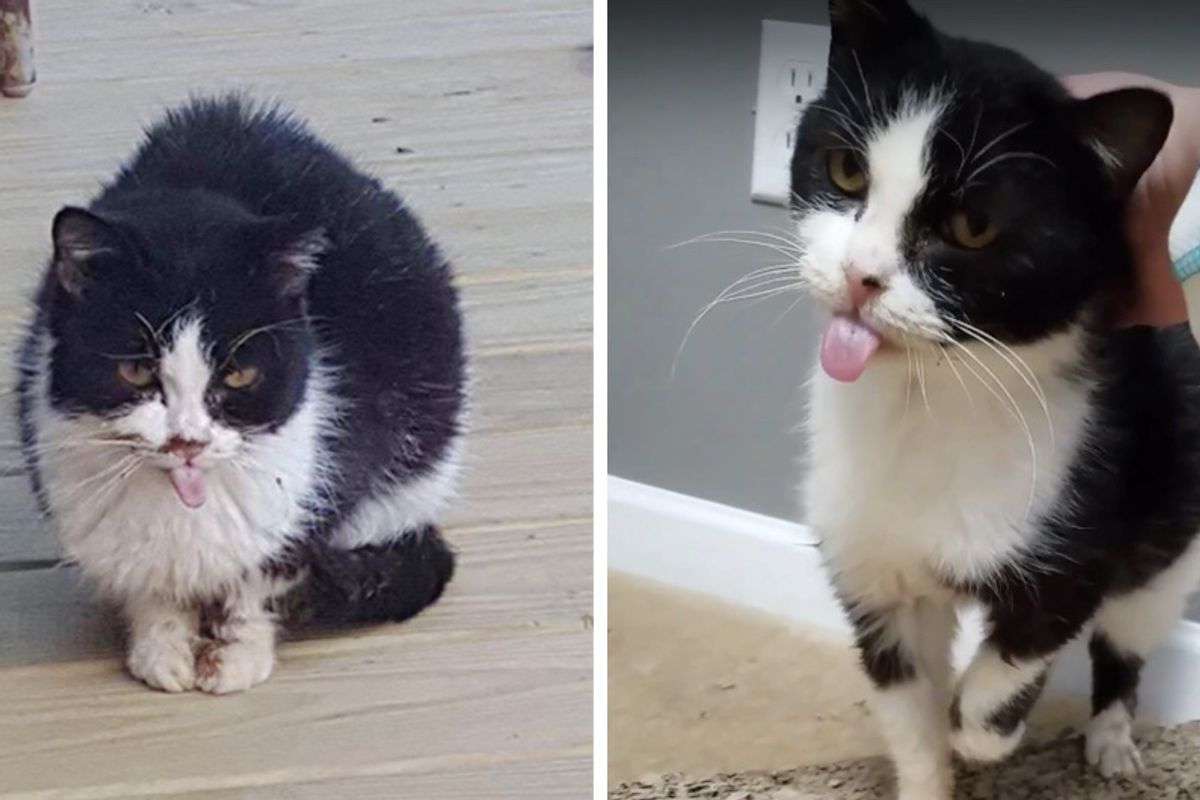 A feral cat was found gravely ill wandering the streets in Flint, Michigan. A couple learned about her plight via Facebook, and knew they had to save her.

Early this March, Cassandra Claxton and her boyfriend, Blake, saw a post about a sickly feral cat in desperate need of help. They immediately offered to take her. The kitty was very frightened but so weak that she couldn't run away when the couple came for her.

"We were instantly heartbroken, but lovestruck, at the same time. Blake and I knew that we not only needed to help her, but that we WANTED to help her. When we gave Panda a bath her first night, she was scared out of her wits and curled up in the sink corner under the room temperature water. After the bath, we wrapped her in a warm towel and took her to the closest emergency veterinarian, nearly an hour and a half away," Cassandra told Love Meow.

It was 10PM at night when they were headed to the animal hospital. Knowing that the kitty needed immediate help, they were not going to wait till the next day.

"One short assessment later was when we learned that this little girl that we thought was a kitten was actually 1.5 years old and only 2.5 pounds."

Panda's tongue was constantly sticking out due to her rotting teeth. "She had stomatitis, a disease that makes her body allergic to the plaque on her teeth. It caused her to get ulcers, or sores, on her gums, lips, and sides of her tongue. She had fleas, tapeworm, and ringworm."

After a long trip back from the vet, they got the medication they needed to start treatment on Panda.

"We took her home to a different part of the house where the other cats (Moomoo, Jasper and Little Girl) wouldn't contract any parasites. The vet said she hadn't been spayed, which led me to believe that she had been born on the streets of Flint. Not to mention her debilitating fear of humans in general."

During the first couple of days, Panda was so fearful of people that she would urinate or defecate every time the couple came in to give her food. They made sure she was always warm and comfortable. On the third night, Panda was so dirty that she was in need of a bath.

"We gingerly pulled her out and gave her another bath with very sensitive cat shampoo. Panda was so small that we were able to comfortably wash her in the bathroom sink, and so weak that she didn't even fight us," Cassandra said.

"Every night when I would come home from work, I'd feed the other three and spend a little time with them. Then I would make the painful journey down the stairs to see the poor thing struggling to survive in the basement.

"It was the second saddest thing I'd ever experienced in my life. I would get down there, hear her go potty in the kennel, feed her, and wait for her to calm down and drink some water. Then I would gently grab her with a fuzzy towel and cocoon her in it. I would keep her in my arms while I cleaned up the kennel, put in new linens, and made everything just right. Holding her in my arms, gently petting her forehead with one finger, I would cry for an hour or more as I willed her to keep fighting.

"I wanted her to know that I loved her and that I was here for her."

Panda tried to hide from her humans but she couldn't hide her hunger. After wolfing down every bit of the food, she retreated back to her security spot and curled up in a ball.

"There were so many nights that I thought that I couldn't do this, that I was setting myself for hurt. But my boyfriend and I pushed through it all with Panda. It was a stressful, emotional, and painful journey."

After a month of tireless effort to get Panda's trust, the sweet tuxedo let out her first purr. That day, Cassandra was able to pet her on her back and give her some head scratches. After the initial shying away, Panda realized that it felt good to be loved, and at that moment she made a 180 and decided to accept their love.

For the first time in Panda's life, she stopped fearing, started embracing all the love from her humans and she could finally sleep easy at night.

"Panda is a firecracker. She only has two teeth (her bottom canines) so her tongue sticks out constantly, which gives the impressions of being sassy and innocent all at once. She rubs on the other cats in the home and plays with them constantly," Cassandra told Love Meow.

"Panda loves being petted and brushed. She's like my little shadow and follows me around everywhere and wants nothing but love.

"This is considerably amazing, taking into account that it took us over a month for us to hear her first signs of purring."

"This is her today. She has a small snaggletooth because has only her two bottom canine teeth. I (lovingly) call her Jaws and Gummy Bear."Cassandra Claxton

Panda has a raspy meow that is quite endearing.

"It's kind of like Daenerys' dragons after they were first born. But, she does trill and chirrup, sometimes she even howls."

Ever since she discovered her first purr, she's hooked. "Purring is her new specialty."

"Panda is the most loving creature that Blake and I have ever come across and we wouldn't change a thing about her," Cassandra told Love Meow.

"The love she gives us today is more than I could have ever asked for in a companion. Now she is a healthy seven pounds and has gotten rid of the parasites and diseases.

"Its been hard... But she's happy. She's playing. She's not in pain. She loves us. And she knows that we love her."

Related story: Feral Cat Brings Her Son to Woman Who Fed Her, and Surprises Her With 4 More