Megan Merriman was on her way home from the LAX Airport when her driver spotted a frightened little kitten running on the shoulder of the left carpool lane of the busy 405 freeway. 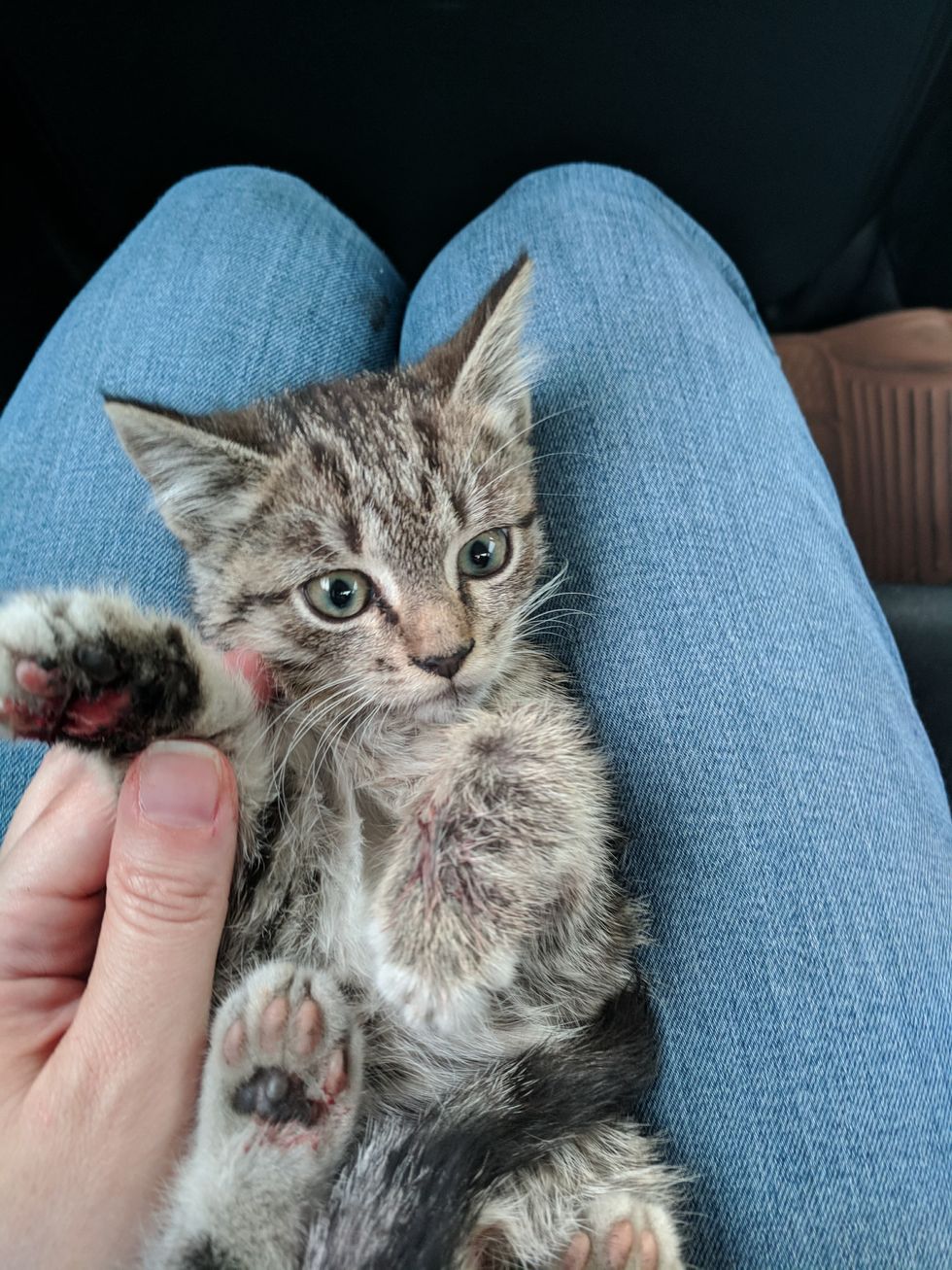 "I saw the kitten and immediately told the driver to stop so I could get her. I couldn't bear the thought of leaving this defenseless creature to die," Megan told Love Meow.

She jumped out of the car and tried to get the kitten out of the busy traffic. The little stray was so fearful that she bit her rescuer as she scooped her up. "I held on for dear life and ran back to the car. Once in the car I noticed that the kitten was bleeding from her right paw pad."

The terrified kitten stayed very still and quiet on Megan's lap during the long drive home. "She was shaking a little in the car. I found her on a 5-lane freeway so my best guess is someone dumped her there." 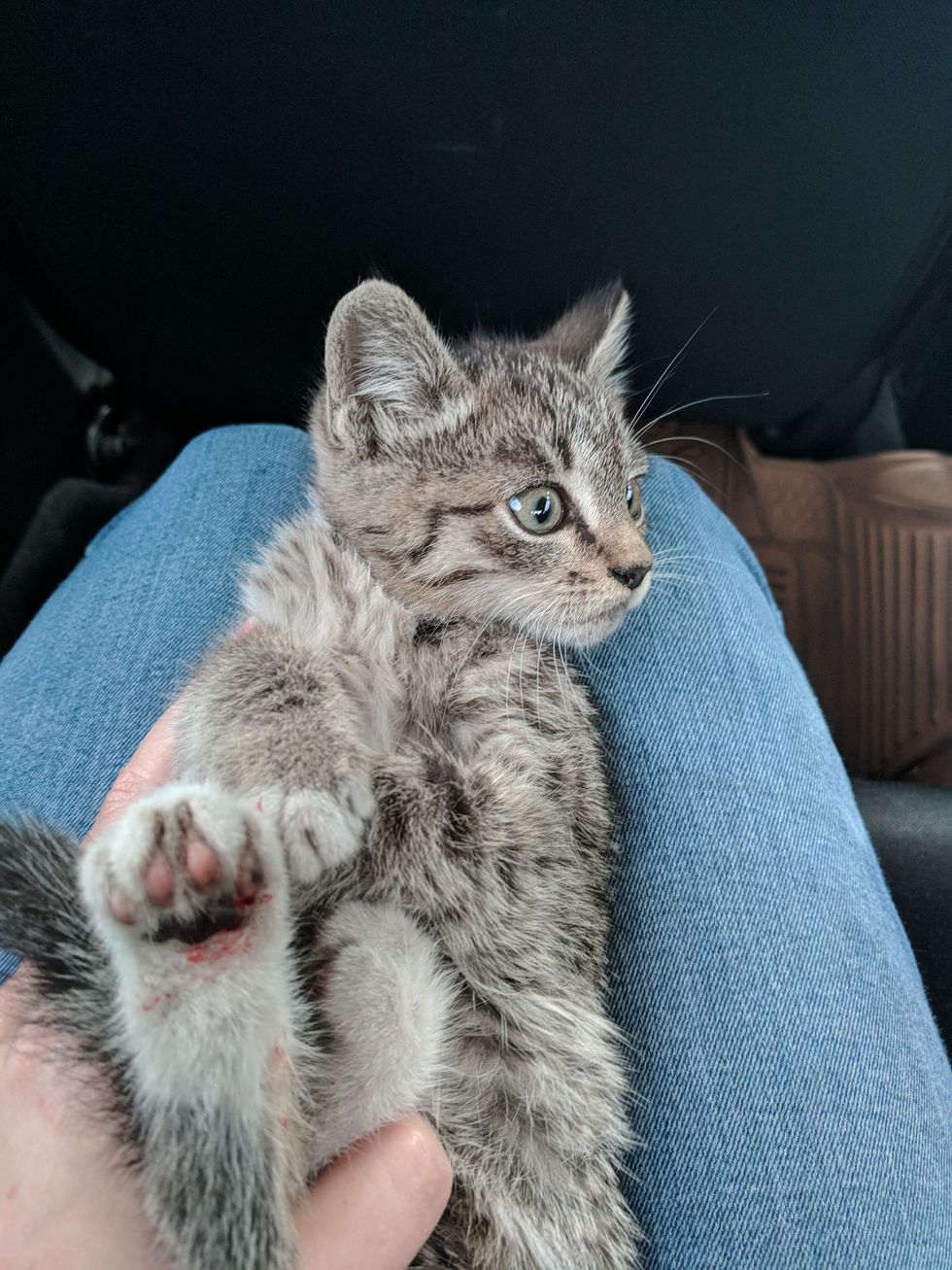 When they got home, Megan brought the kitten into the bathroom so she could have a quiet place to herself. While Megan was cleaning her bite wound, the kitten went flying into the right corner of the vanity and disappeared.

The tabby scurried into the space between the vanity and the wall in her state of terror. Unable to coax the kitten out, Megan set up a camera so she could see and make sure that the kitten was ok. "I could see that she was still alive and still terrified as she sat still in the very back of the narrow enclosure." 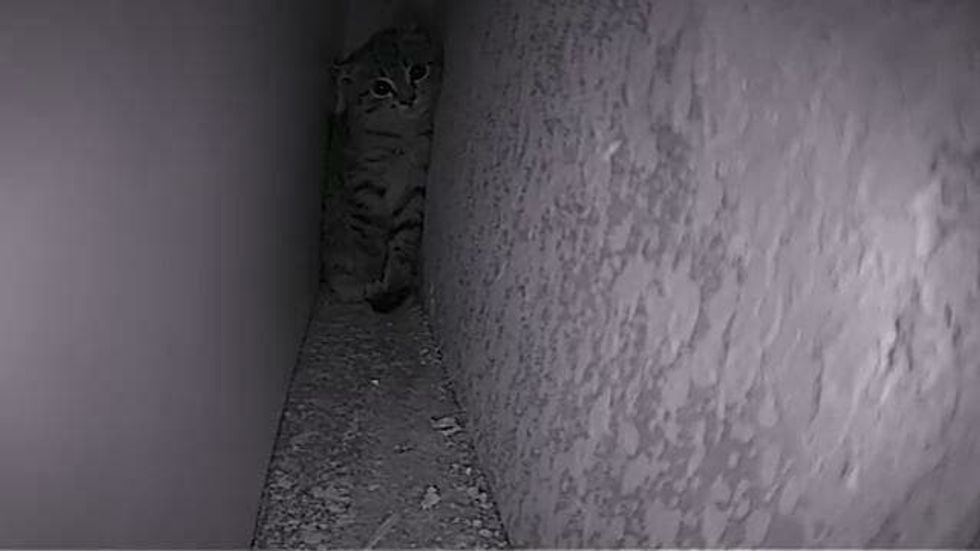 "A friend who works for a cat rescue suggested playing videos of mama cats talking to their kittens. When I played the video, the scared kitten started meowing back, but she didn't budge."

Megan bought the smelliest kitten food she could find, and the tabby started coming closer to the exit but was still too terrified to leave the comfort of the small space. "Eventually she started poking her head out the bottom of the hole." 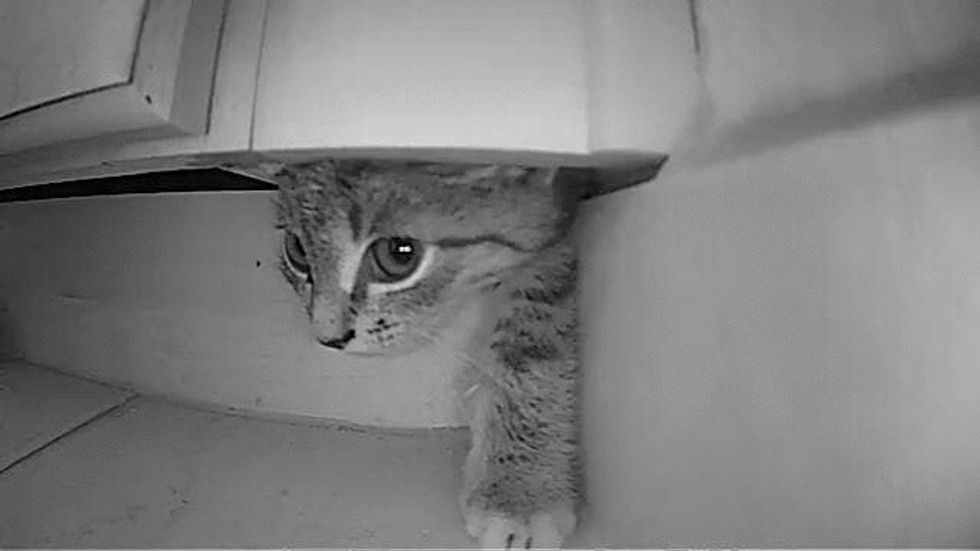 Two days later, Megan spotted the kitten come out of the hole while she was monitoring through the camera. "Knowing she was still very scared, I planned my approach carefully," she told Love Meow.

She grabbed a towel, opened the door quickly and plugged the hole. As the kitten frantically tried to retrieve into the hole, which was no longer accessible, Megan grabbed her and wrapped her with a towel. "Out of pure fear, she lost control of her bladder." 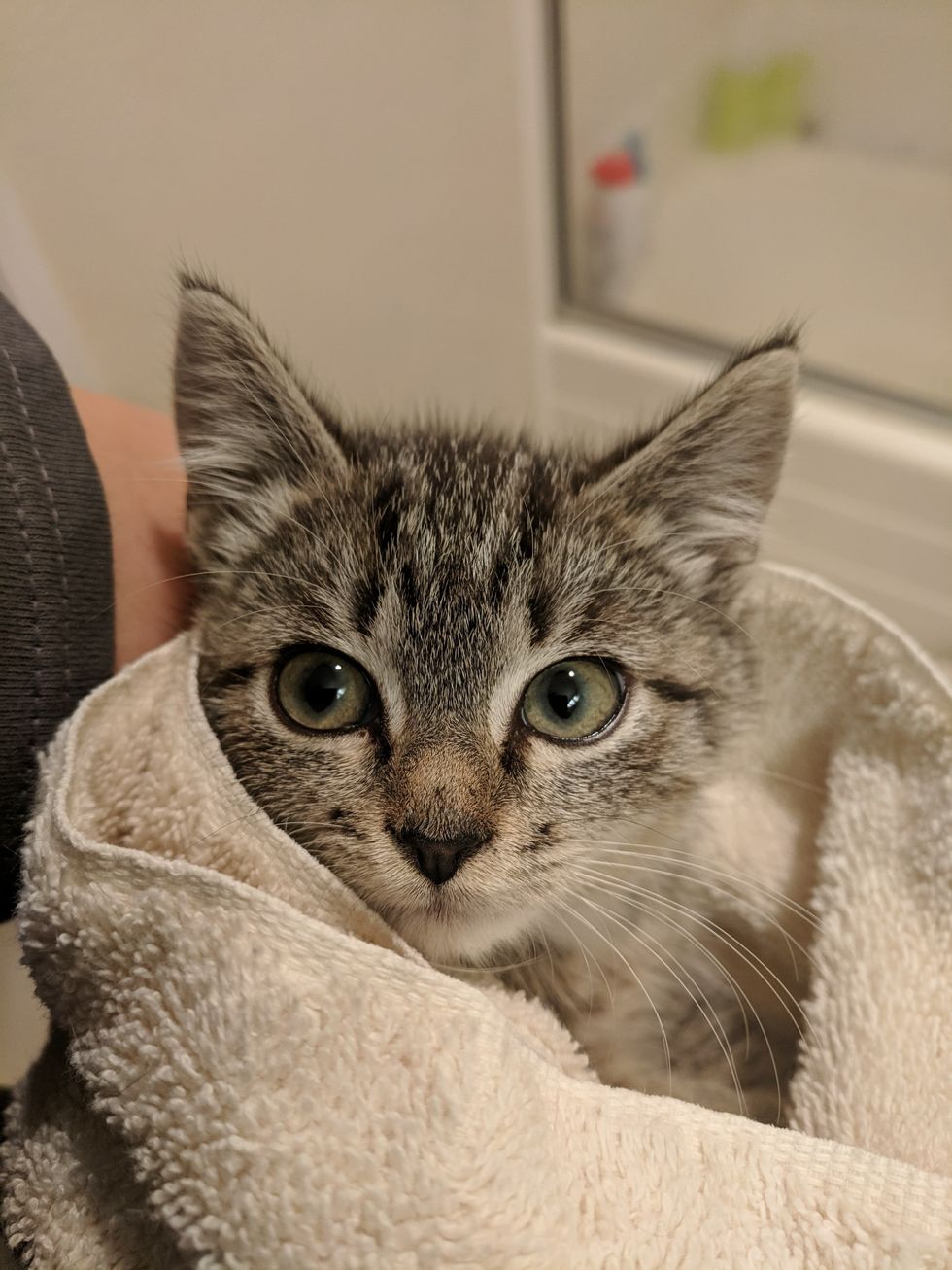 The frightened kitten was flea-infested and just skin and bones. While Megan was giving her a quick bath, the tabby began to drink water from the faucet. She was so thirsty that she didn't mind the bath.

The water turned grey from flea dirt, but the kitten felt so much better afterwards that she began to relax. 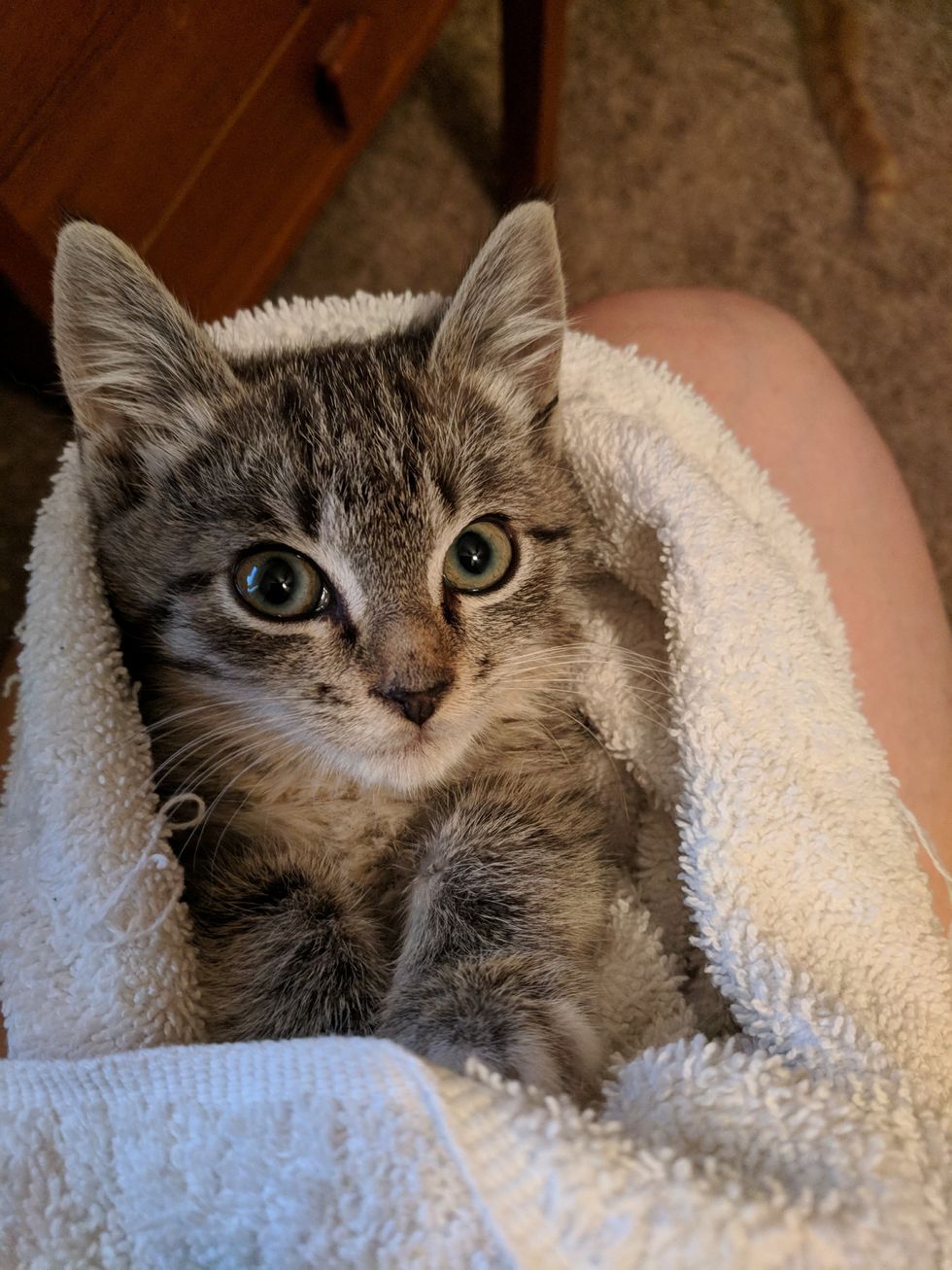 "After the bath, I wrapped the kitten up in a towel to dry her off and held her close and comforted her that everything was going to be ok. She started to relax and I hand fed her while wrapped in the comfort of the towel.

"I was then finally able to get a good look at the kitten to see if there were any other injuries. She was still very scared and would hide behind the toilet and flinch when I went to pick her up, but I knew it would only be a matter of time before she felt safe." 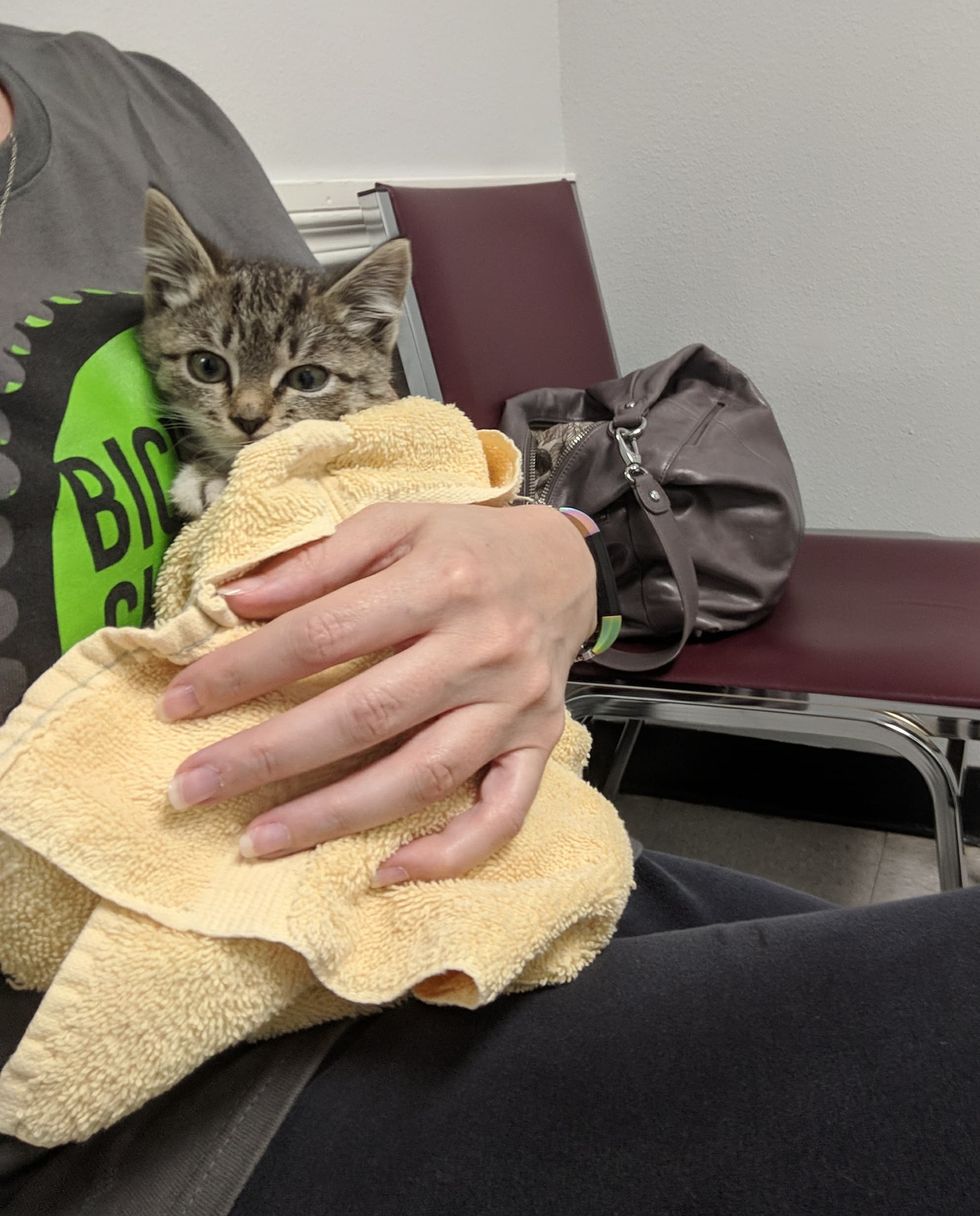 She was named Nash after the city of Nashville (which was where Megan flew back from on the day she found her). Slowly but surely, the kitten began to trust.

"When she passed out while I was holding her and started twitching, I knew she felt safe enough to really fall into a deep sleep." 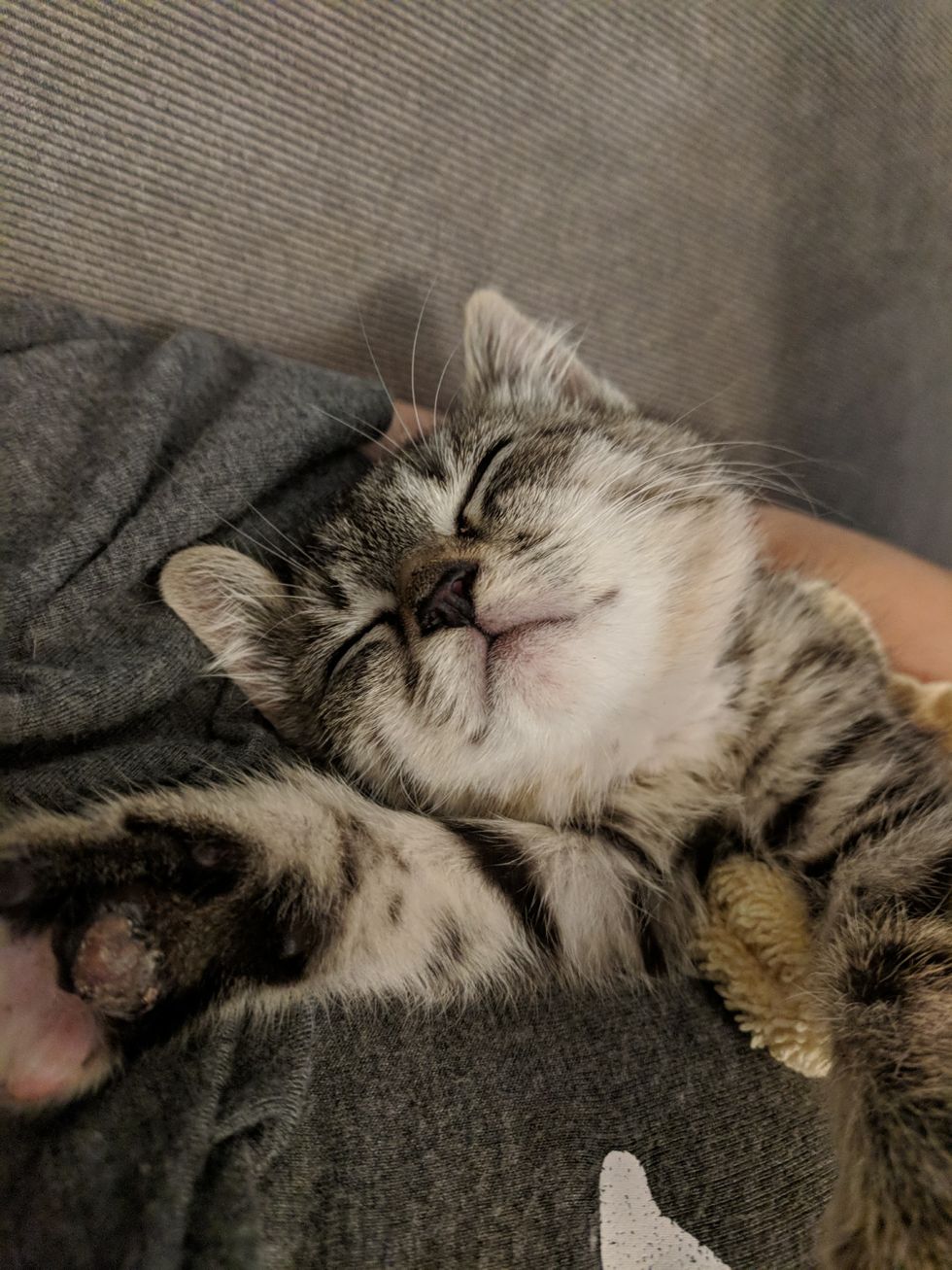 A week later, the tabby girl has made a complete 180 and constantly clings to her human mom for cuddles.

"Nash is a total love bug and is not scared any longer!" 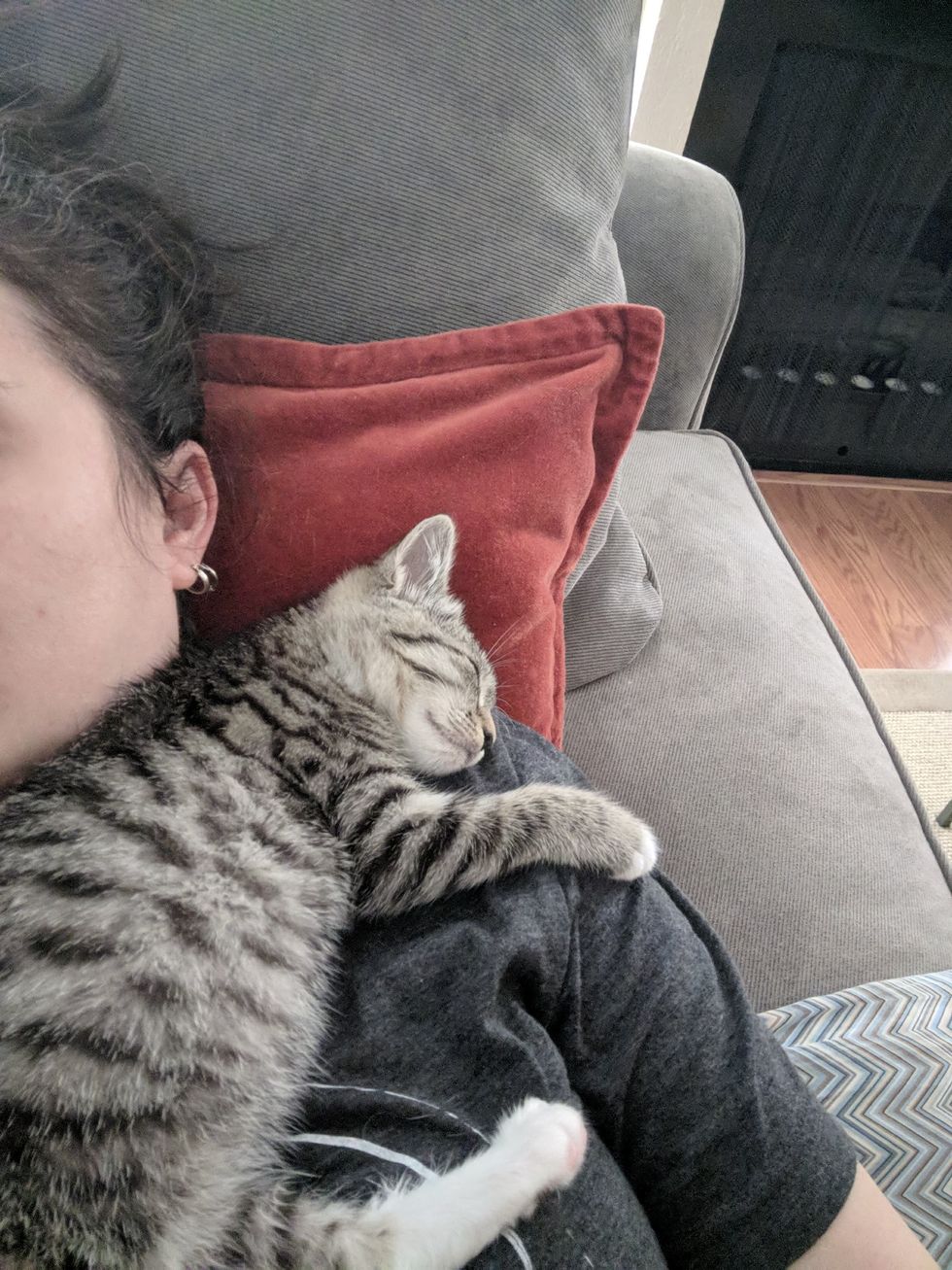 "She's thriving and has made a full recovery from her terrifying ordeal on the 405 freeway," Megan told Love Meow.

The sweet kitty has found someone to lean on. 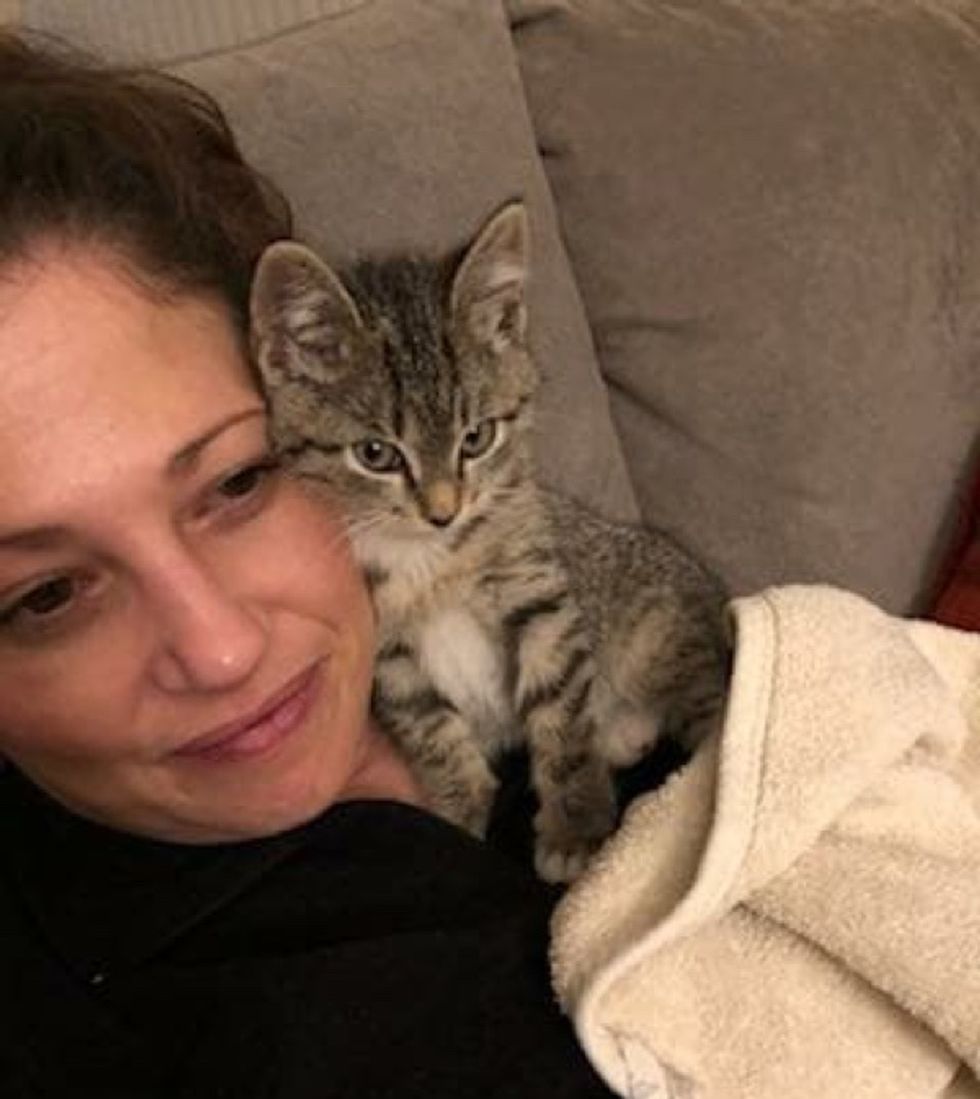 Nash loves to be wrapped like a purrito or snugged up with her human mom.

It comforts her and makes her feel safe and loved. 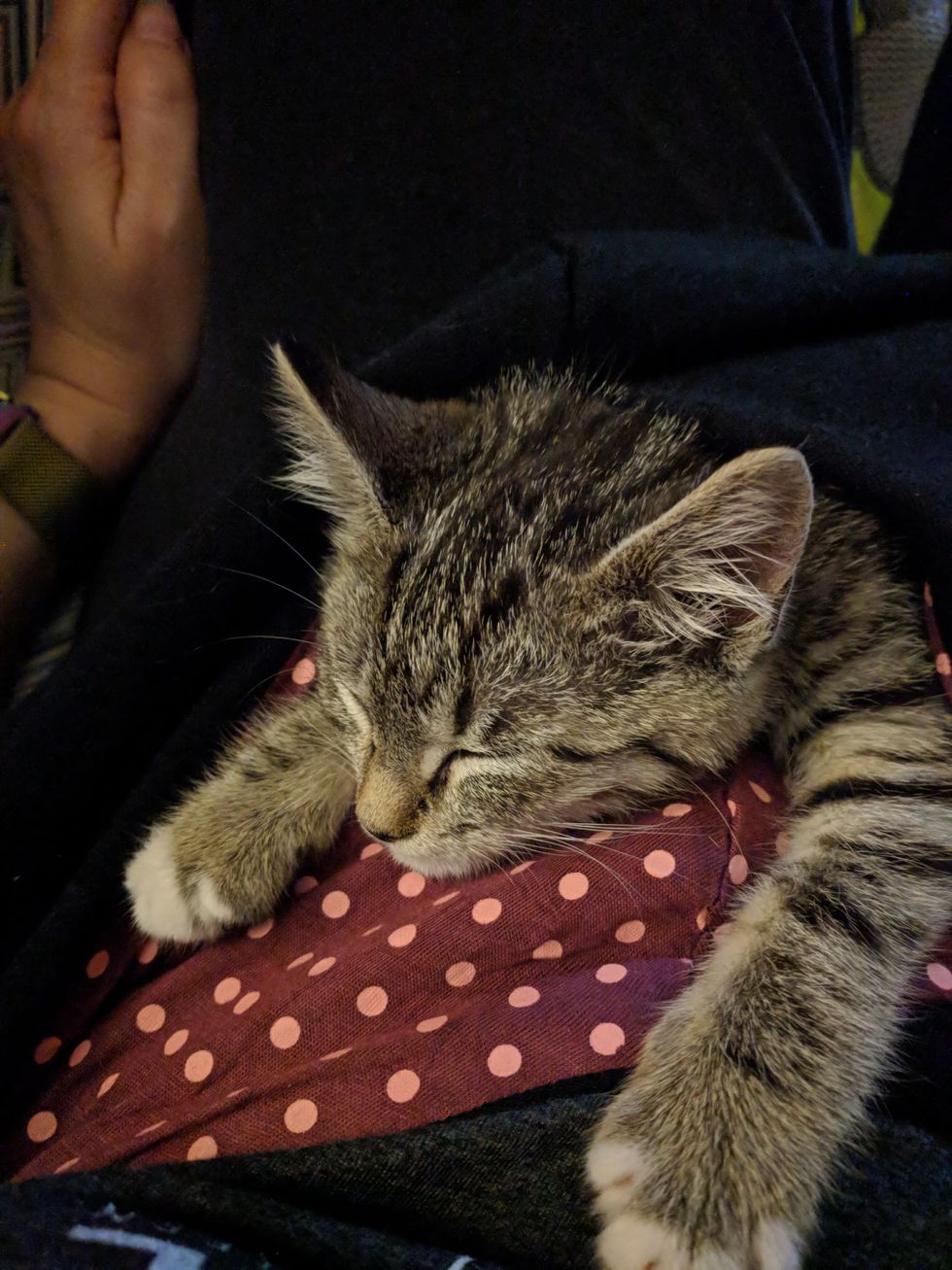 She follows Megan everywhere she goes and will fall asleep next to her with zero worries in the world. 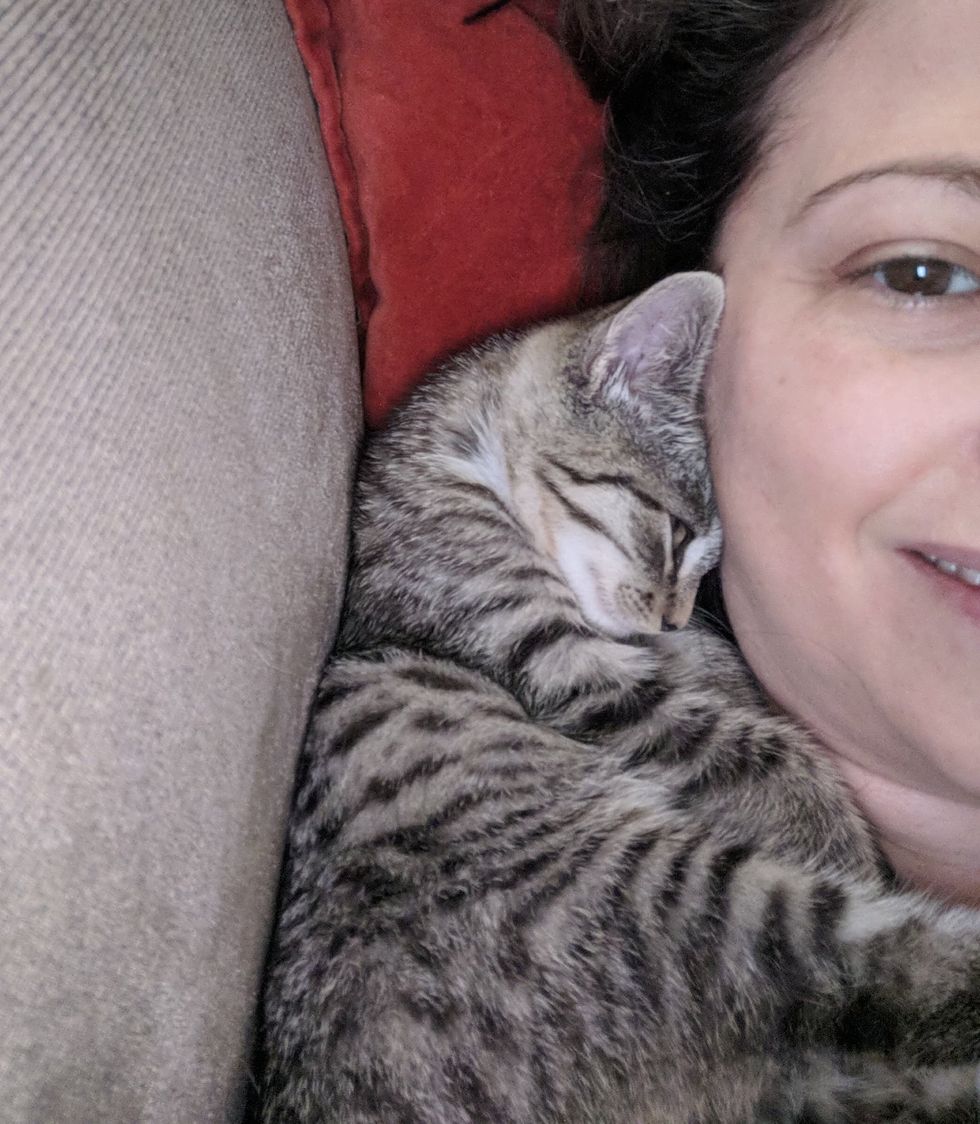 In just a week, Nash has gone from a terrified little kitten to a trusting lovebug.

"She loves to cuddle and give me kisses all the time, I think, to thank me for saving her life." 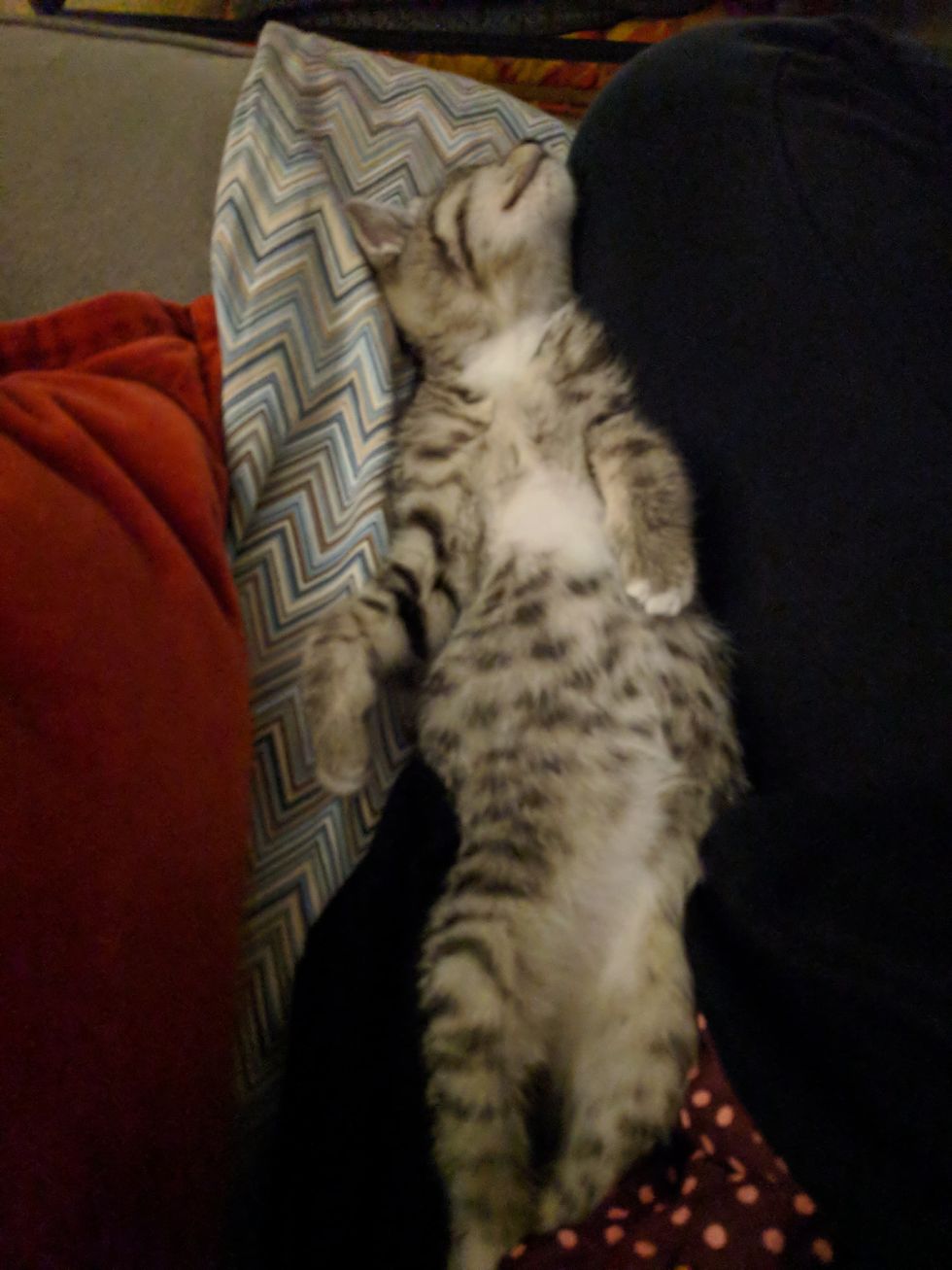