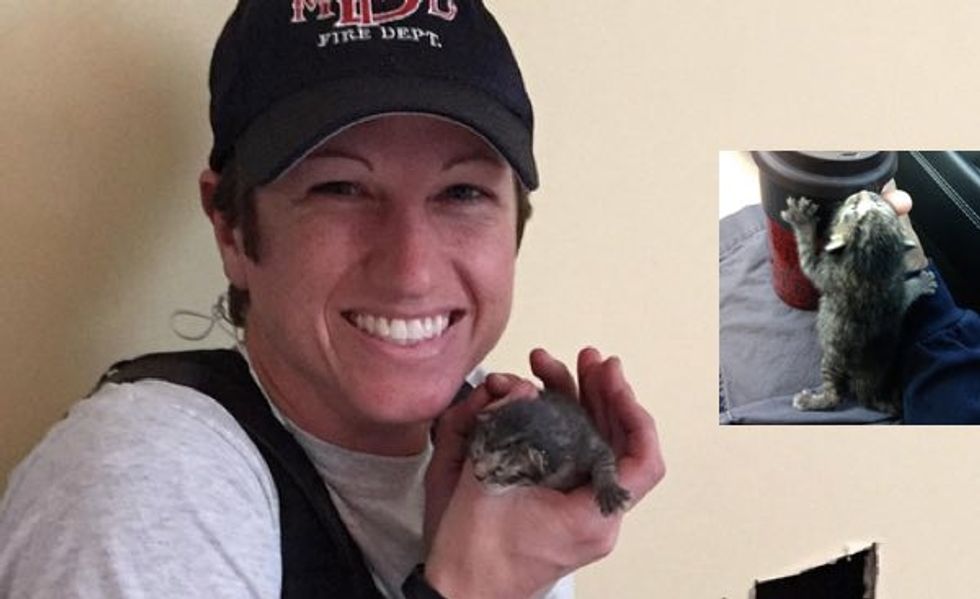 Firefighter Rescued This Kitten Twice! First by Freeing Him from a Wall...

A tiny kitten trapped inside a wall was saved by a firefighter who developed such a bond with little rescue. She decided she had to adopt him.

Tara Holcomb with the Mount Dora Fire Department responded to a call about the confined kitten.

"My hand landed on a little ball of fur with a thin tail, and my first thought was that I had grabbed a rat!" Holcomb told The Dodo. "After reminding myself that I was already holding it, I pulled out this tiny, precious kitten."

"That little kitten was all I could think about the rest of the night at work," she said, "and I even thought of a perfect name: Wall-E."

So the next day, she returned to the homeowners and asked if the kitten still needed a home. They said she could have the kitten if she wanted.

"I immediately turned around and headed home with the little guy sleeping in my lap, nestled inside a sock," she said.

Firefighter Tara Holcomb rescued this little kitten twice. First by saving him from being trapped in a wall...

Look how tiny he is!

Second by giving him a forever loving home!

"Our animals seem to have found us, each in their own way, and we are grateful to be able to give them happy homes. In return, they give us more love than we could ever ask for!" said Tara.