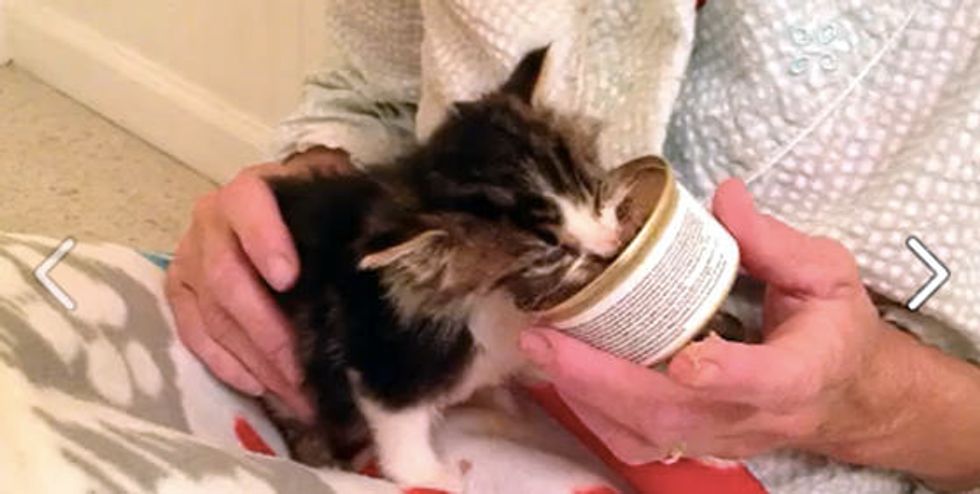 This tiny kitty is a fighter who was found in the middle of a highway. When they brought him to the vet, they could feel every bone in his back. In the past 2 days, he went from dehydrated, listless and unable to see to moving and eating on his own.

"Hard to believe that just 48 hours ago this little darling was hanging onto life by a thread. We had to drip formula into his mouth and he could barely swallow, look at him now, eating on his own. Gwinner truly IS a miracle," said CATS Cradle Shelter via their Facebook page.

"This little nugget was found laying in the middle of a highway. A kind person stopped and picked him up and dropped him off at the Humane Society Fargo Moorhead. Fresh out of qualified fosters who can bottle feed and do sub Q fluids, she called on CATS Cradle Shelter for help.... He was only 12% hydrated and needed fluids immediately. His eyes were stuck shut and sunken in, you can feel every vertebrae in his spine he is so thin."

Gwinner the kitten was found on the highway, dehydrated, lifeless and starving. His eyes were stuck shut. Even the vet was worried that he wouldn't be able to make it, but the little one survived against all odds.

They fed him through a syringe & nursed him back to health over night. 24 hours later, his eyes began to open and he was given a warm bath.

About 2 days after the rescue, he started eating on his own. Now he is getting better and healthier.

See him eating on his own for the first time after the rescue [Watch Video]:

It's amazing how far he's come in the past 48 hours. With love, warmth and some food, the little kitten has got a second chance at life.