A man stumbled upon a tiny kitten when he was on his way home one night. She was in terrible shape and barely had any strength left in her.

He picked her up, rushed to get her help and even gave her a cuddly friend so she wouldn't feel alone. 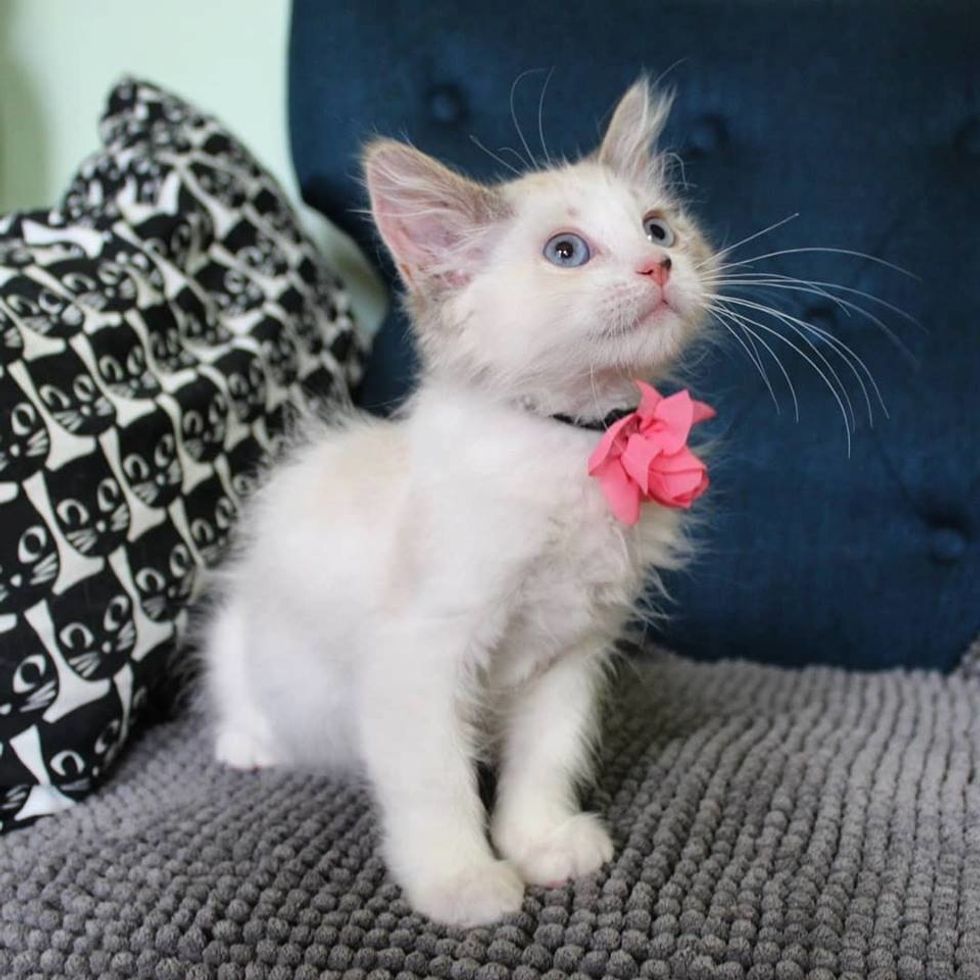 About two months ago, Santana from Los Angeles was walking down an alley way near his home when he suddenly noticed something moving by his feet. It was a kitten who couldn't open her eyes, struggling to breathe.

He couldn't leave the poor thing out there so he took her home and immediately reached out to his local rescue, Friends for Life Rescue Network, for help.

"The kitten was alone, covered in fleas, and had a really severe upper respiratory infection. Her eyes were sealed shut, and she was weak, malnourished and very hungry," Jacqueline DeAmor, co-founder of Friends for Life Rescue Network, told Love Meow. 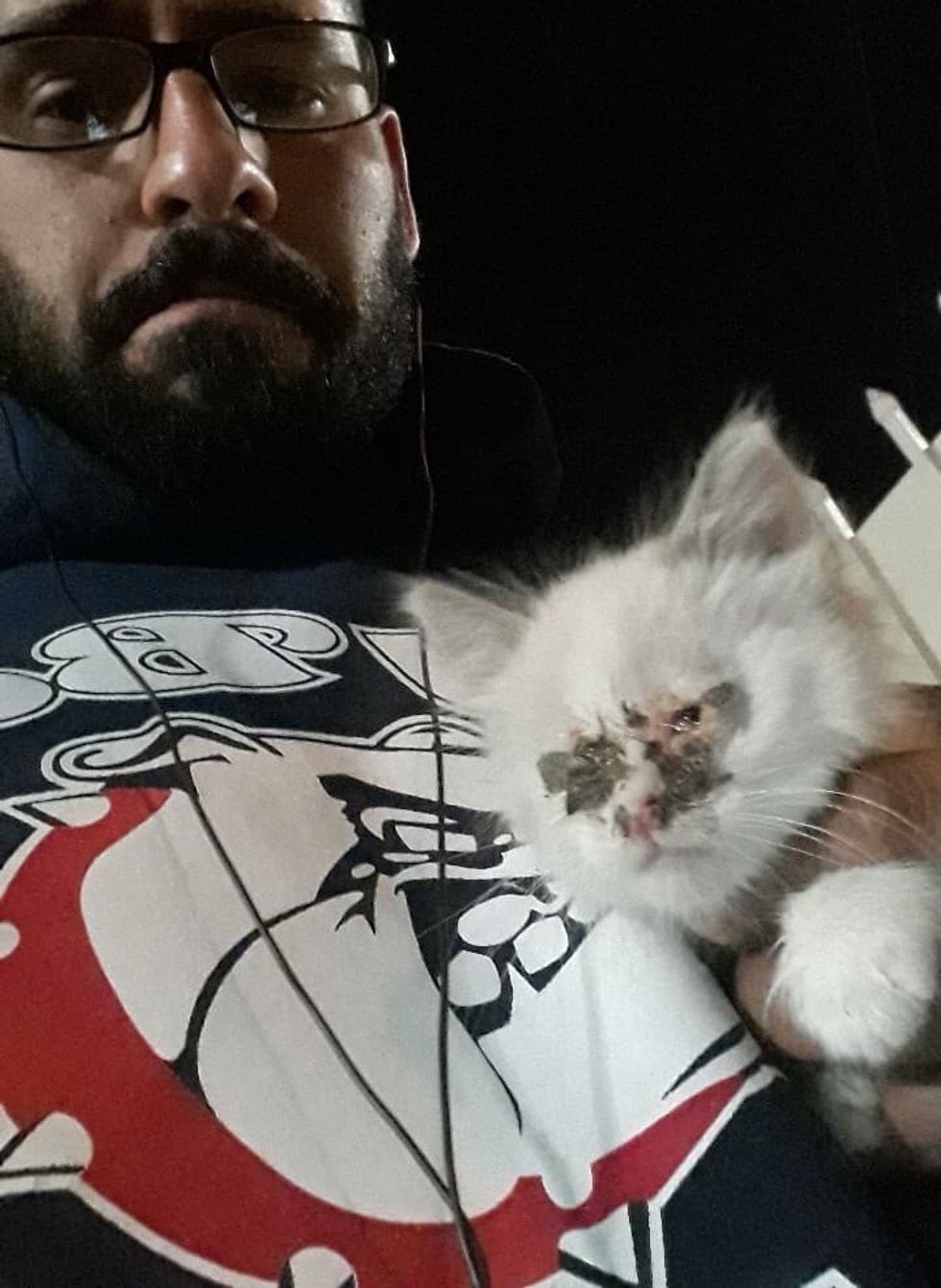 That night, he brought the kitten to the rescue where they removed the hard crust on her eyes and gave her the medical attention she needed.

Santana, who owns a bunny named Stu, had never cared for a kitten before but he offered to foster the little one so she could have someone to nurse her back to health. 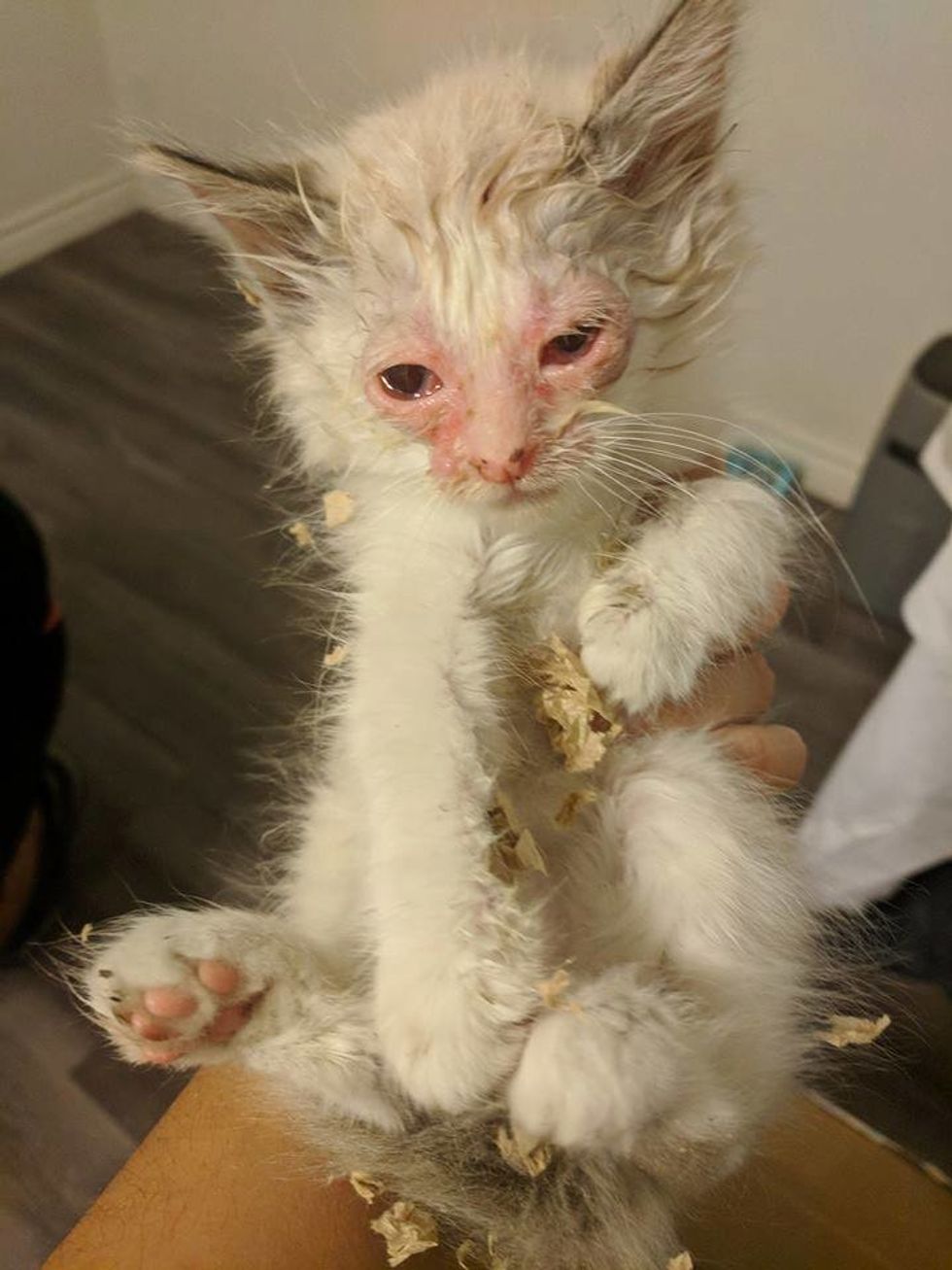 Worried that the kitten would feel lonely on her first night there, Santana borrowed his bunny's stuffed toy Stella (Stu's girlfriend) to keep her company.

The next morning, the kitten was back on her paws and was eating like a champ. 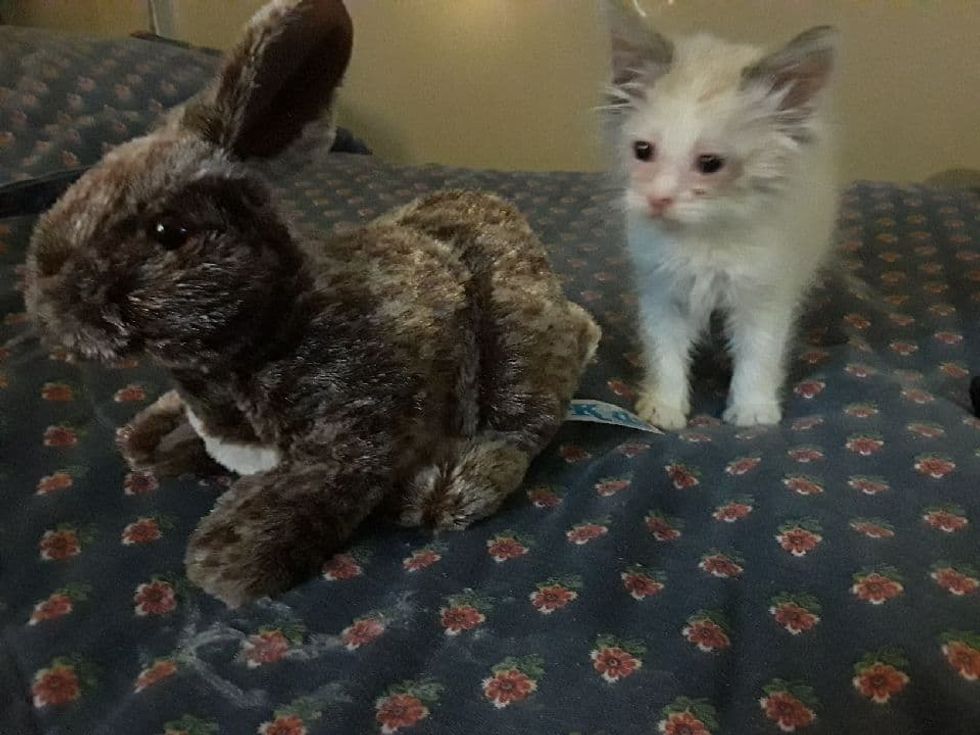 "I cleaned her beady eyes, gave her the eye meds and let her run loose a bit in the room. She's quite the adventurer and climber," Santana said.

"There was a moment in it all where she sat down to look back. I felt an unrelenting appreciation peer into my soul. I like 'Ashe' for her… It's the name of the Queen of Fjord - a champion of Runeterra." 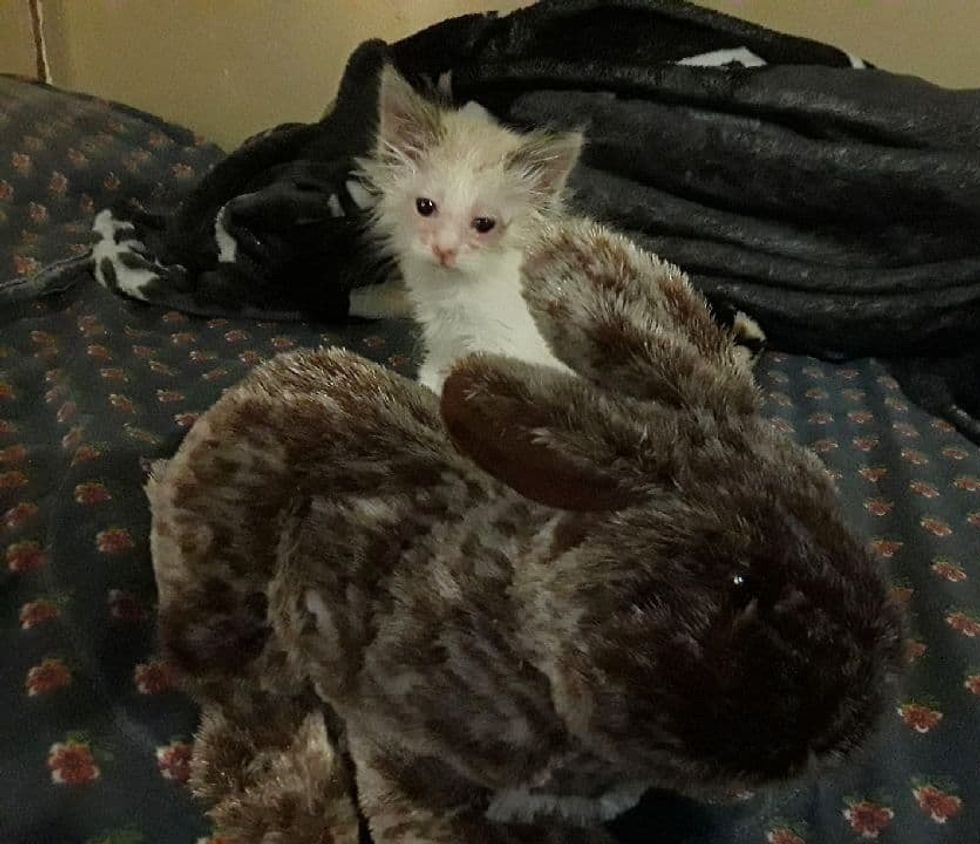 The kitten was silent during the first week at her foster home. "She had a hard time meowing. She did it but most of the time nothing came out. I think it was from being sick." 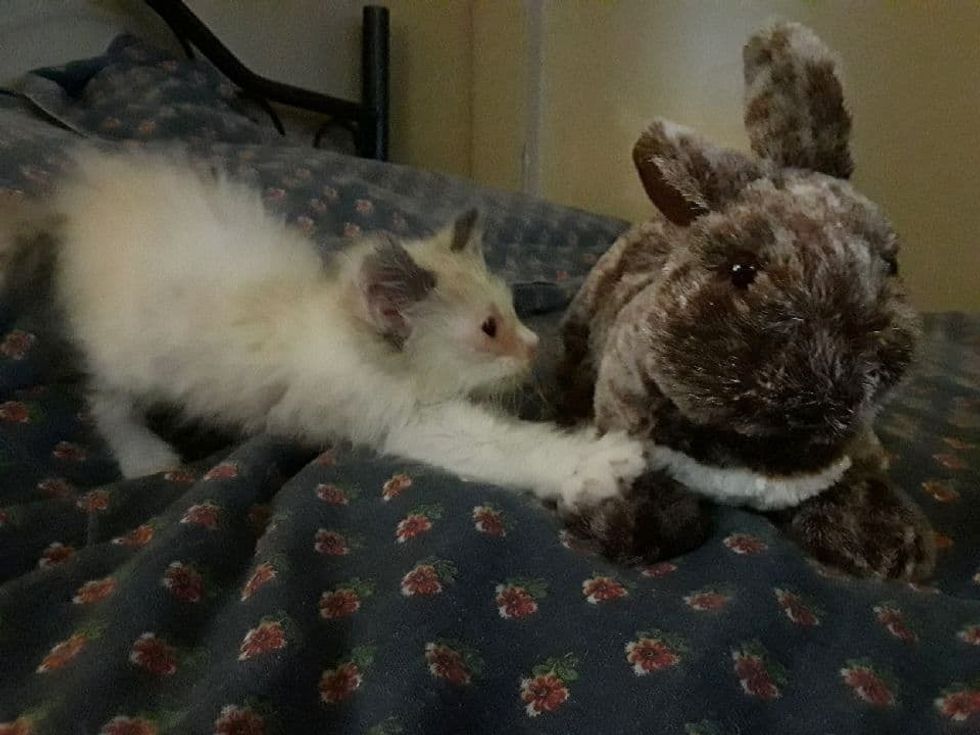 "She follows my feet as if I were mommy duckling. The other day, I think she was trying to drink milk from under my chin," he added.

"She's playful, running around the bed trying to catch something I can't see, kneading as well, but she only kneads when she's on my chest. She purrs… we have a strong nap game."

After several weeks of antibiotics, Ashe has finally completely healed. 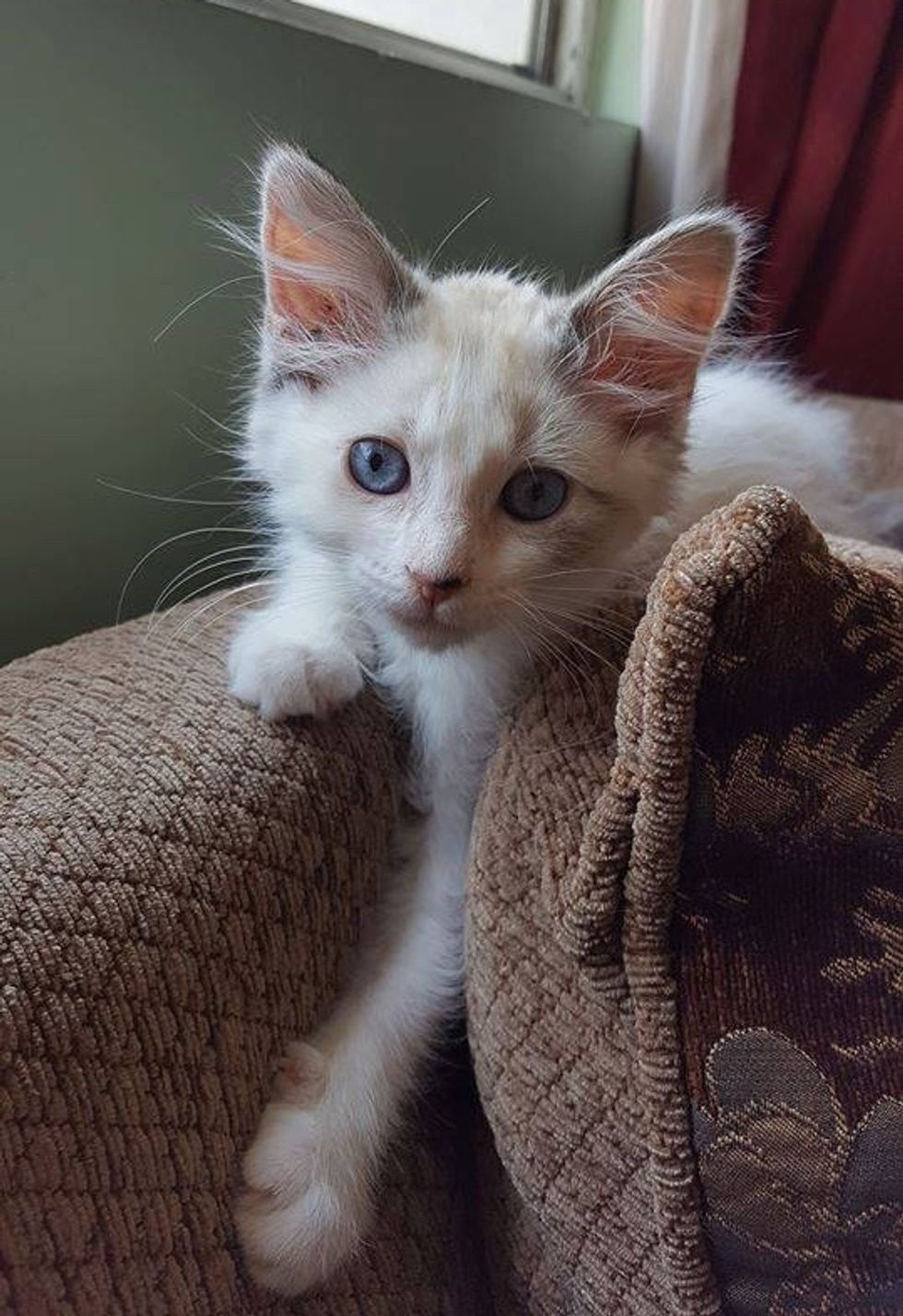 "She's gained a lot of weight and will soon be ready for a forever home," Jacqueline told Love Meow.

The kitten who couldn't even open her eyes when she was found, now shows off her beautiful blue eyes and a larger-than-life personality. 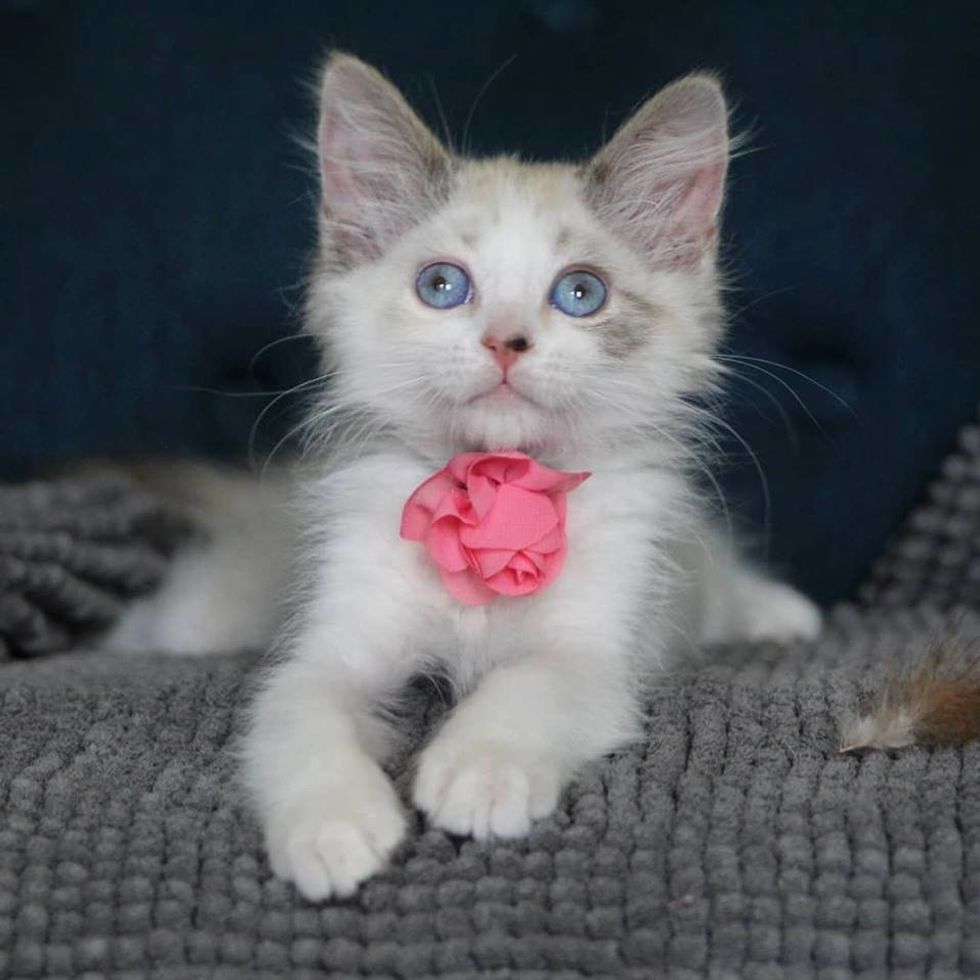 Related story: Homeless Kitten Finds Someone He Loves and Follows Him Everywhere He Goes