A kitten who had been found in a yard, got back on his paws and turned into quite the personality. 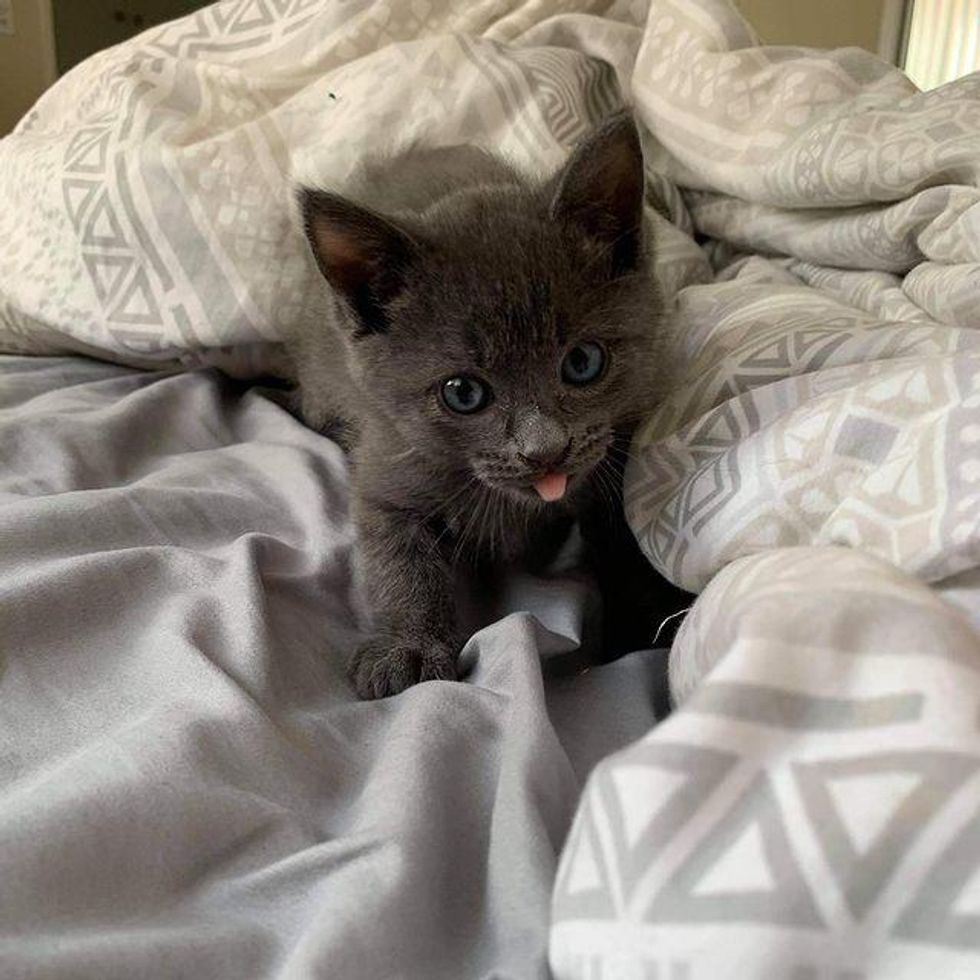 Jellybean the kitten has a big personalityFriends for Life Rescue Network

Earlier this year, a resident from California discovered a kitten in need of help. Their dog went out to the yard and came back with the tiny ball of fur. He was just a few days old without a mom or siblings.

Jacqueline DeAmor, founder of Friends for Life Rescue Network, saw a post about the kitten needing medical attention and offered to take him. Adam and Margaux, foster liaisons of the rescue, hit the road and went to pick him up.

"When we first saw him, we knew he was a fighter. He yelled the whole hour long drive home, letting us know he was here to stay," Adam and Margaux shared with Love Meow. 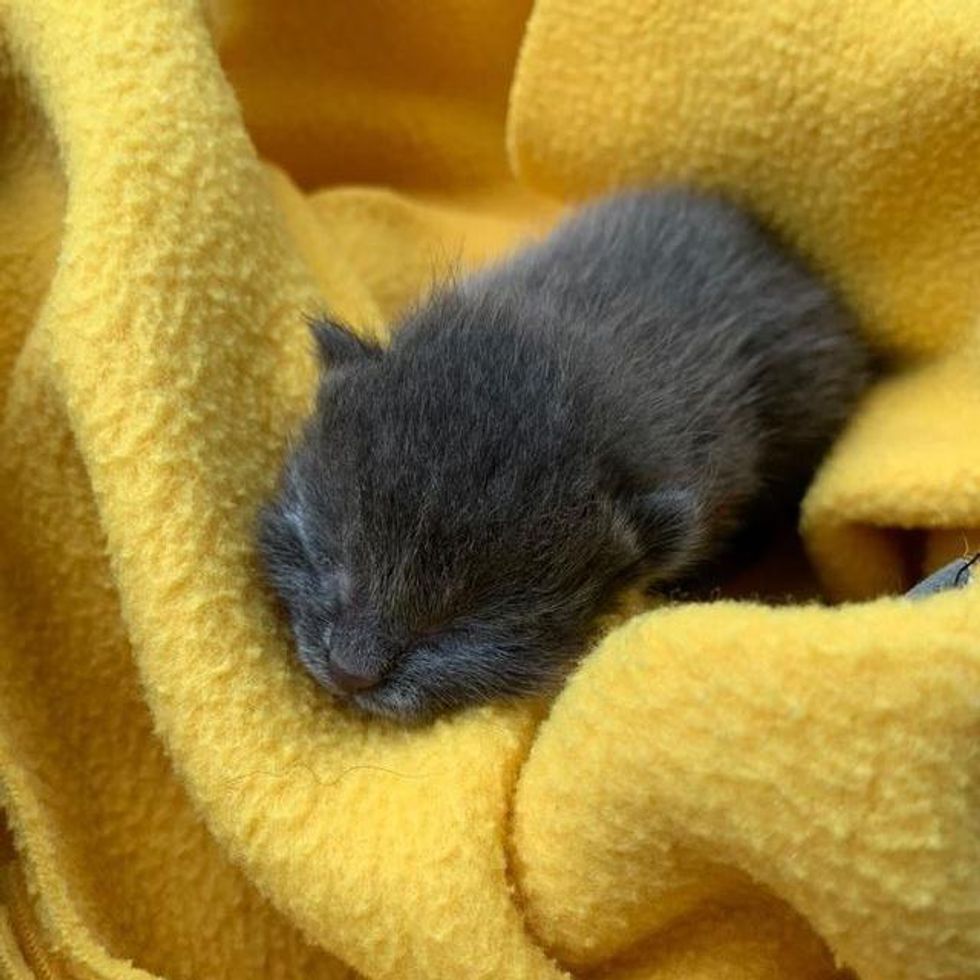 The kitten named Jellybean came with a gnarly bite wound on his shoulder, but with proper care, he began to recover.

"When I got him, the first thing I did was place him in an incubator with a heating pad, so he could warm up. I then fed him his first real good meal. We cleaned up the wound and then started him on antibiotics," Jacqueline told Love Meow. 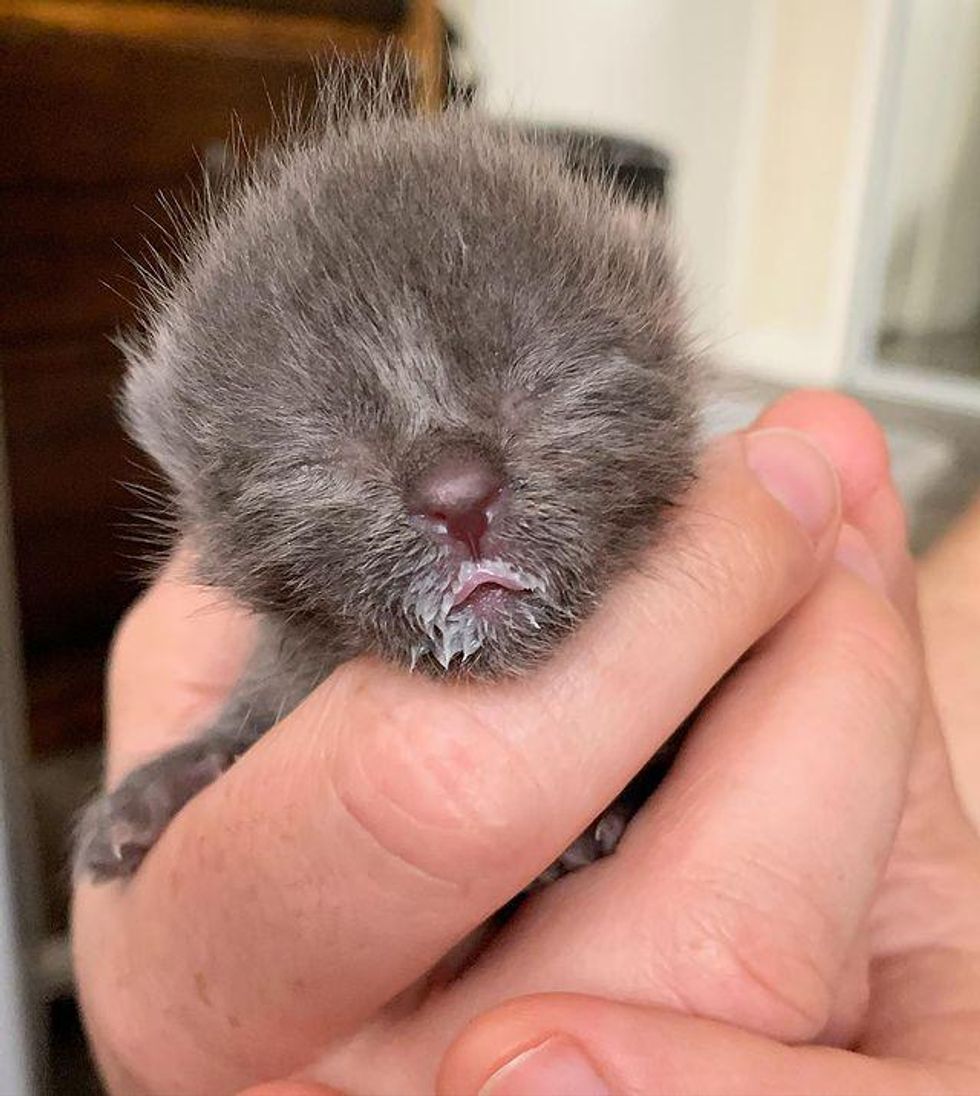 Within three days, his wound healed up and Jellybean was ready to charm his people with his adorable quirks.

After every feeding, he would stick his tongue out, presenting the cutest "blep" as a way of showing his satisfaction. He would even fall asleep with his mouth open, dreaming about snacks. 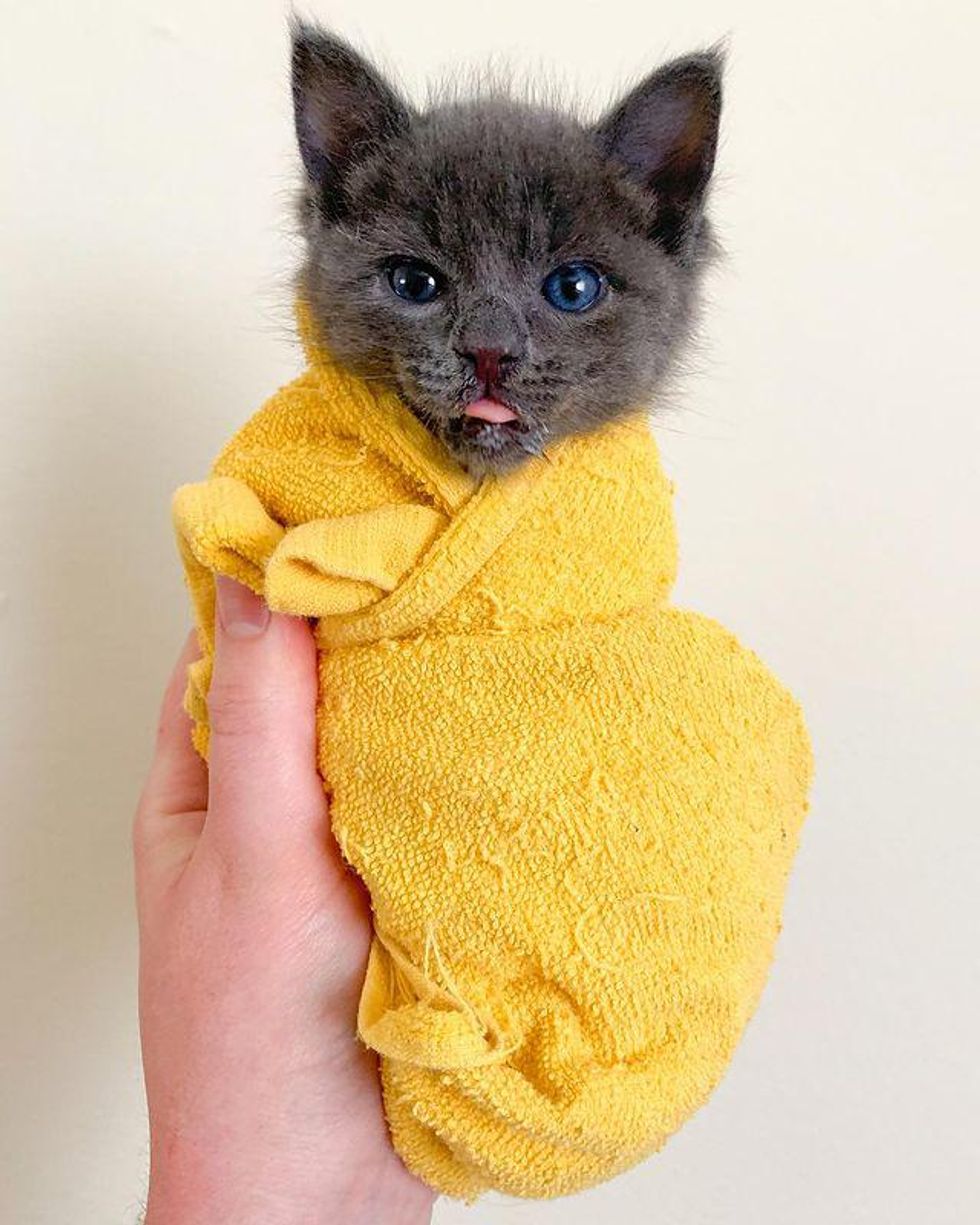 Jellybean had to be syringe-fed hourly for a period of time as he had trouble getting a good latch. He was so pleased to be catered to that he rejoiced with his signature "blep."

"For about two months, we took care of him during the day while working from home, (and Jacqueline took on the foster duties at night). We picked him up at seven every morning, and she picked him up on her way home (from work)," Adam and Margaux added. 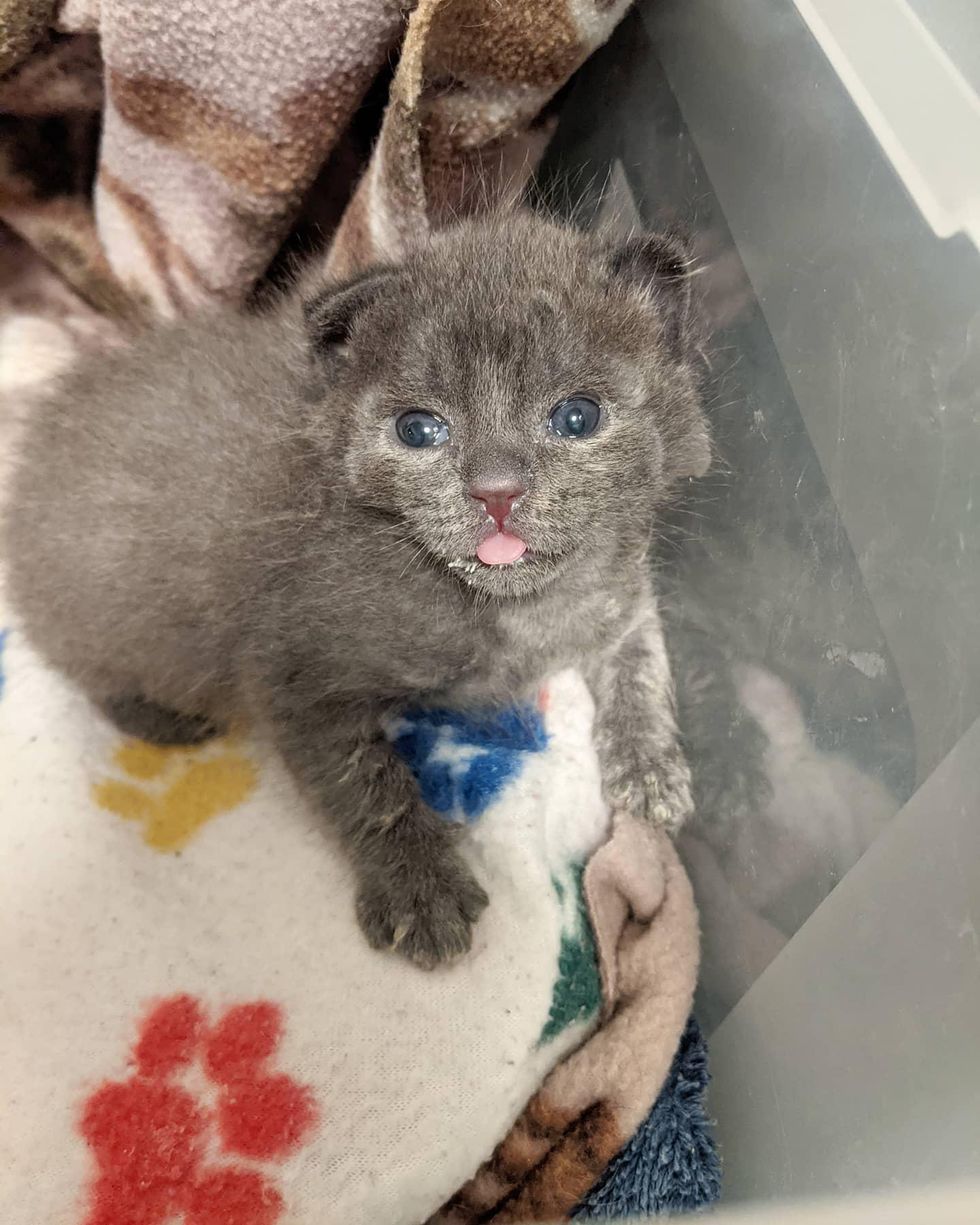 "After a couple weeks, he started eating bigger meals and reached a healthy weight! As fussy as he was on the bottle, it took him forever to wean! He didn't give up his milkies until almost seven weeks."

As soon as Jellybean figured out how to walk and jump, he turned into a ball of energy. He was getting very active and playful and constantly on the lookout for trouble. 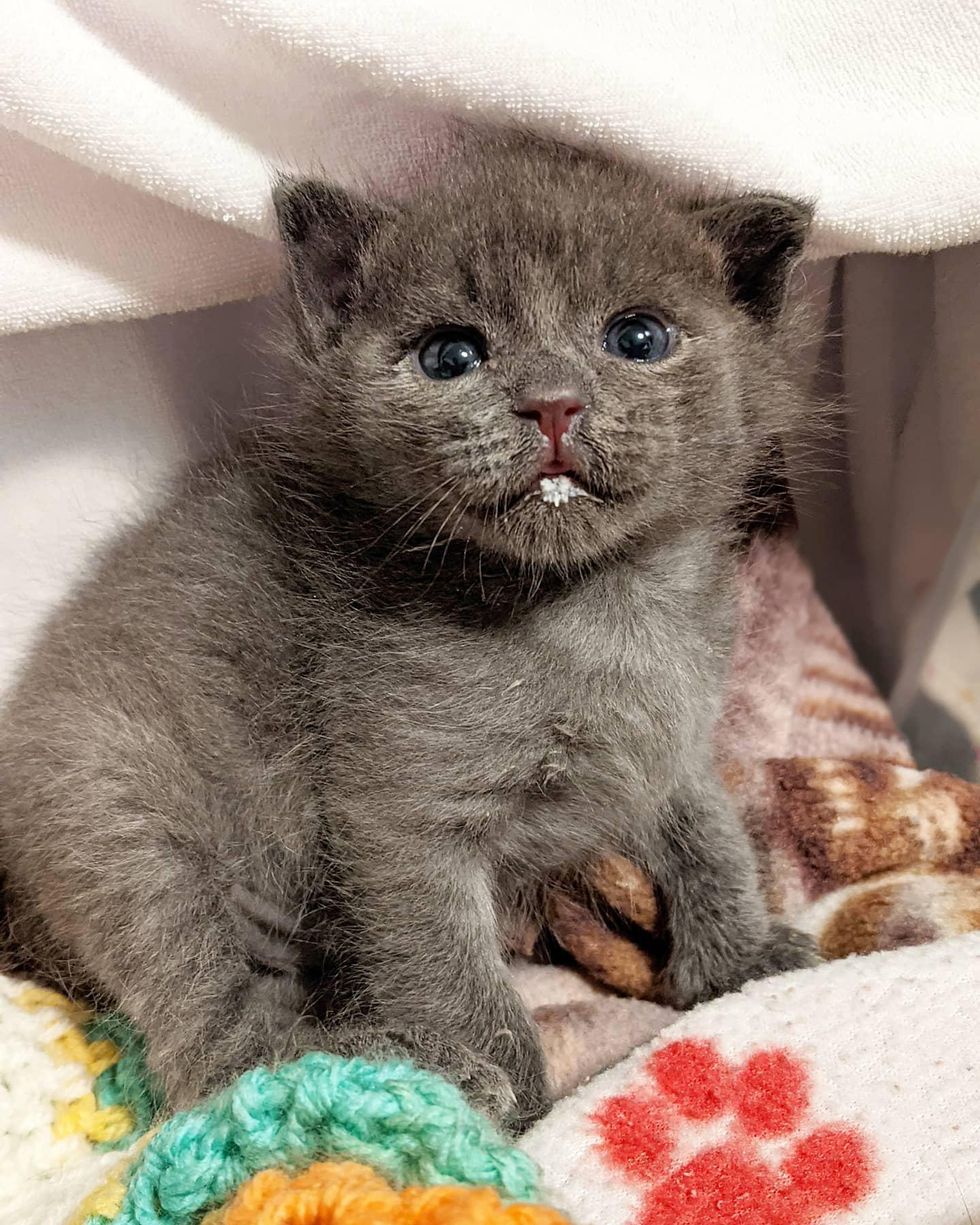 "Since he was a solo kitten and didn't have any friends, we took turns working from the bedroom to keep him company," Adam and Margaux told Love Meow.

"He used to curl up next to us as we worked, and nap for hours. Snuggling was really one of his favorite things. As soon as we threw the covers over him, he'd curl right up and fall sleep." 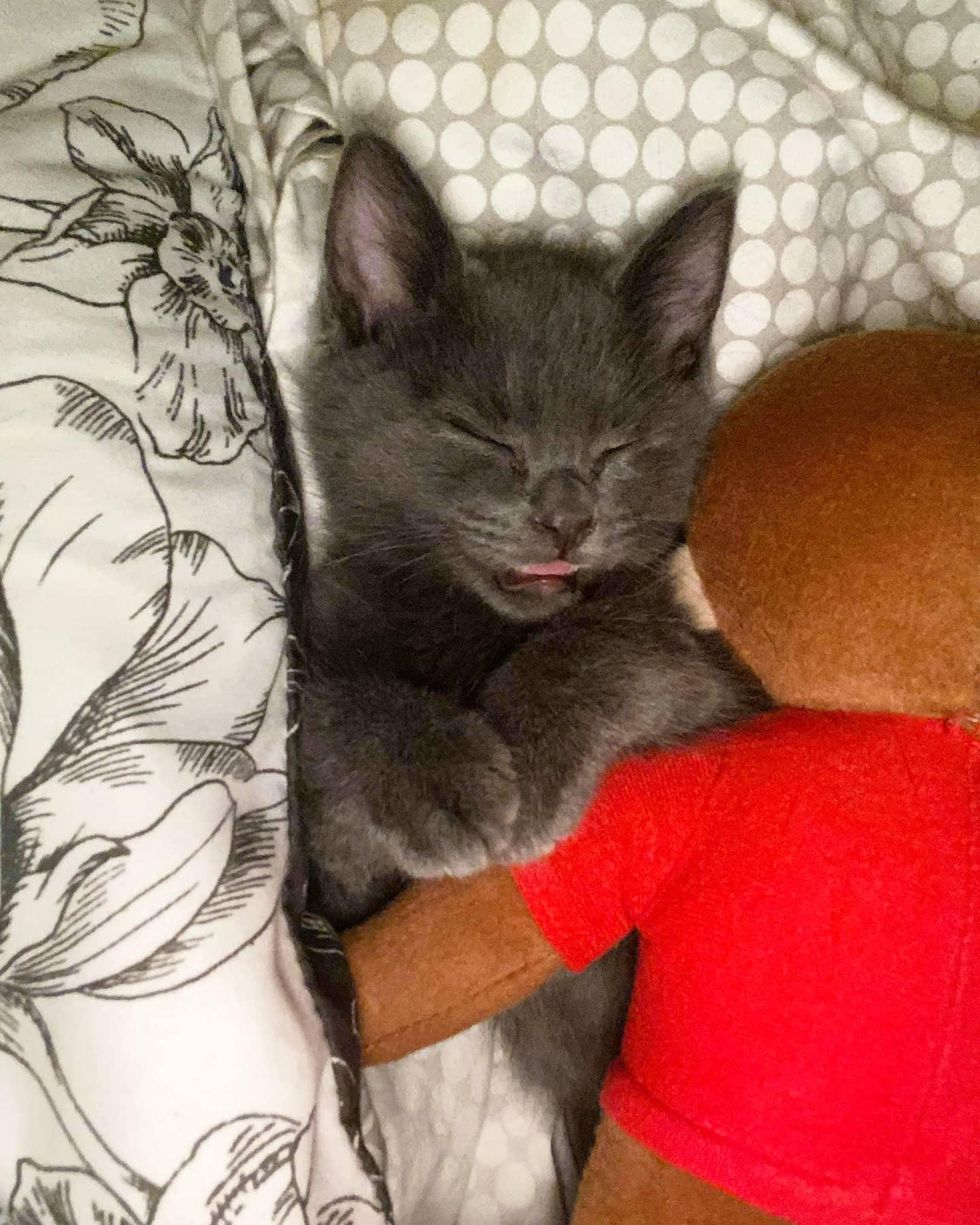 Knowing how much he enjoyed having a constant companion, when a former adopter showed their interest in adopting Jellybean, they were overjoyed for the little guy. "After we spoke with them, we knew they were the perfect fit."

The adopter had been following Jellybean's recovery since the beginning, and fell head over heels for him. 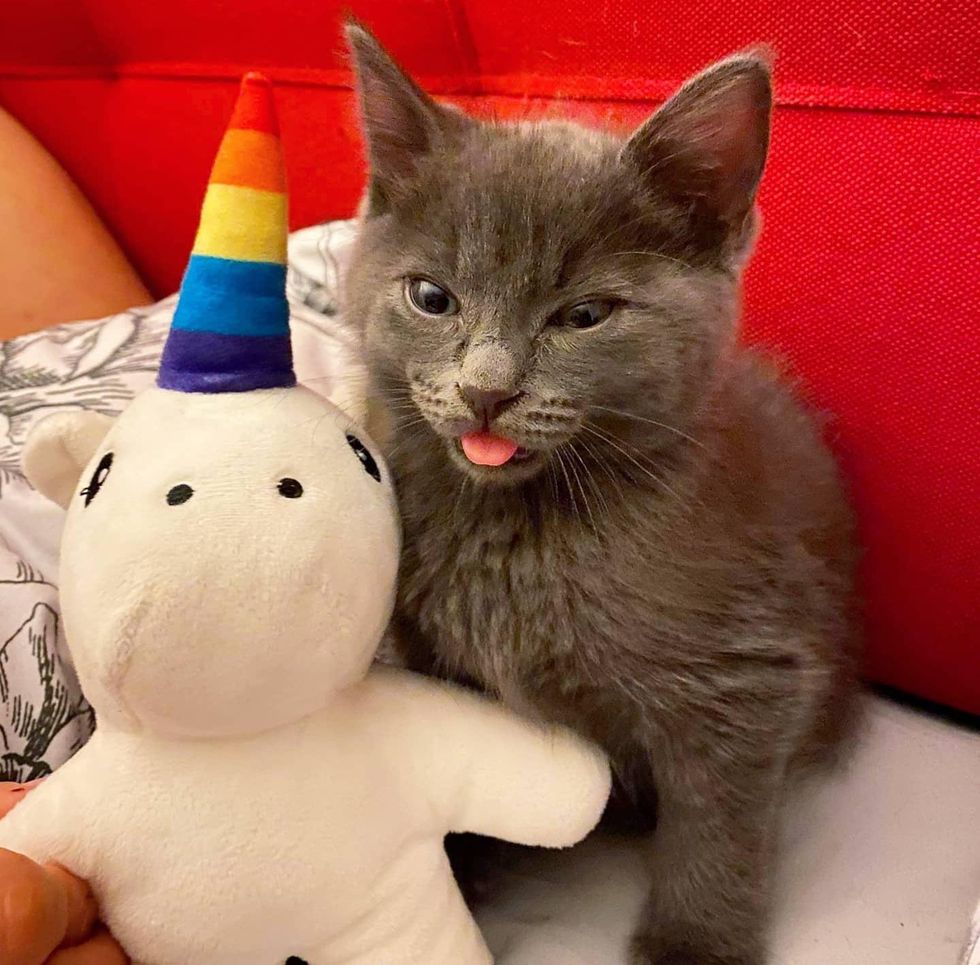 "He made himself right at home. He's got so much personality for such a small thing. He's obsessed with watching videos," Jellybean's forever human told Love Meow.

"We give him five minutes of screen time before bed, and he just watches intently. He always needs to be at the center of everything you're doing." 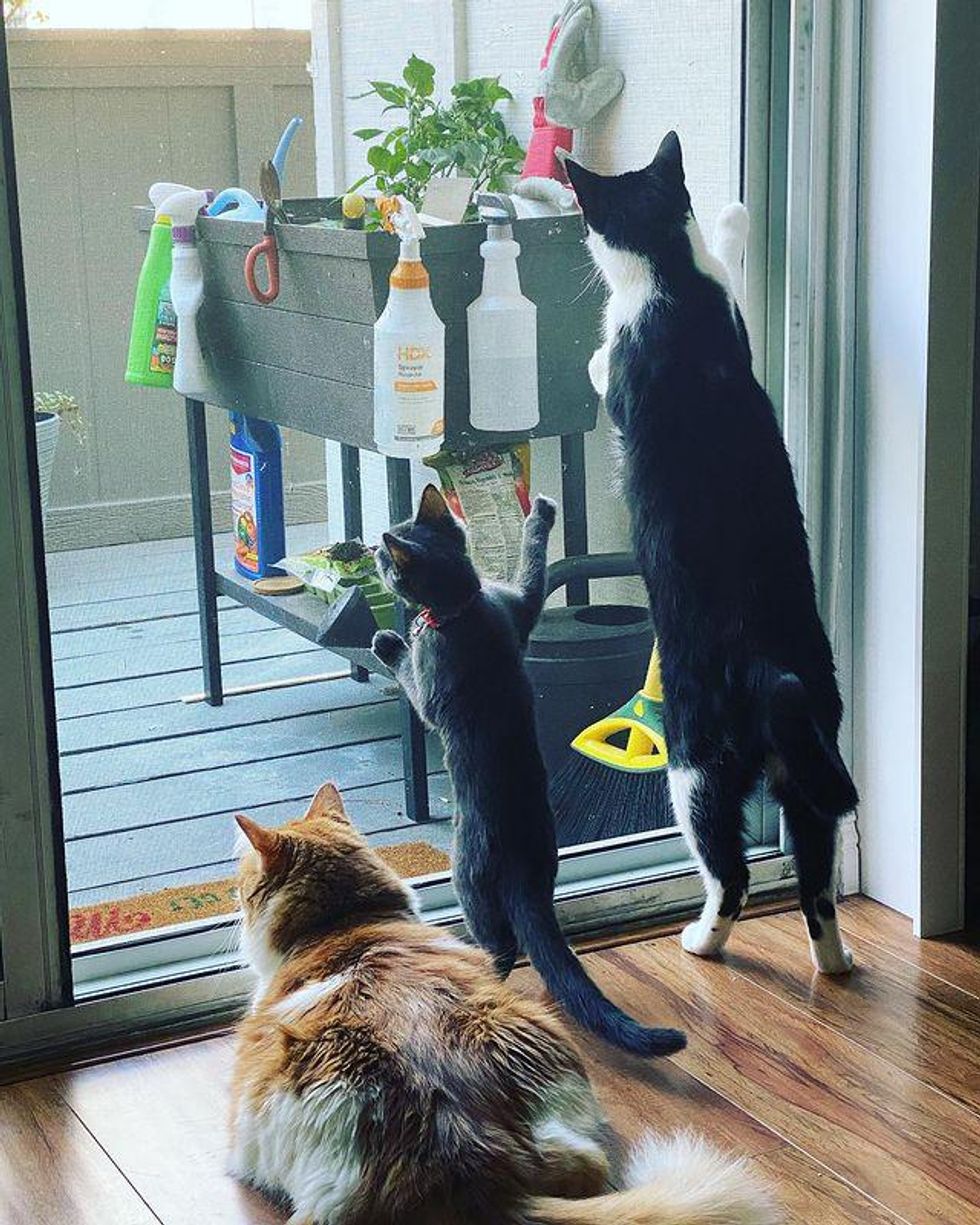 Jellybean hanging out with his new feline siblings@dailydoseofjellybean

Now that Jellybean has several feline siblings to roughhouse with, he is blossoming into quite the personality.

But some things never change — Jellybean continues to sport the cutest "blep," a way of telling his people how happy and content he is. 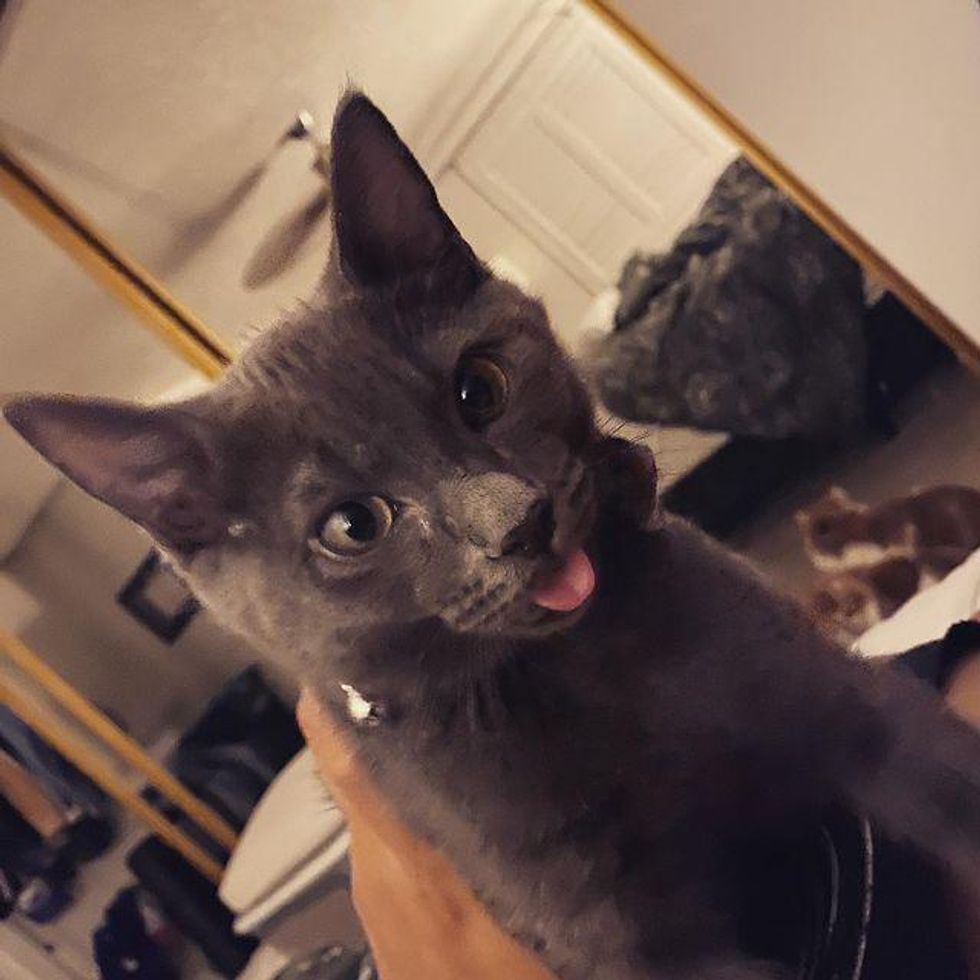 "Jellybean is so happy in his forever home with his humans and all his new feline siblings," Adam and Margaux told Love Meow.

"After spending almost two months keeping a close eye on him (in foster care), we now love watching him grow up from afar." 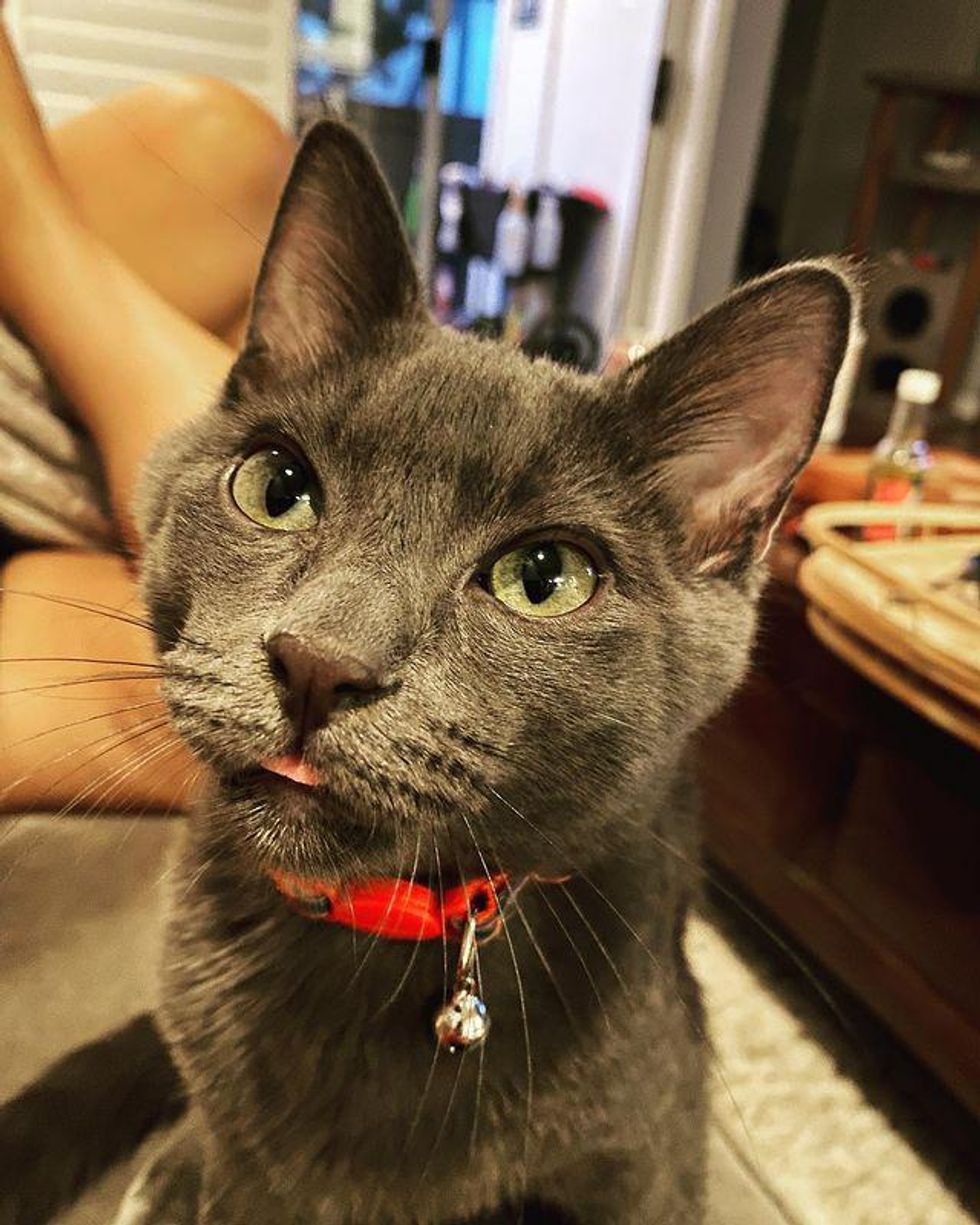 Related story: Cat with Sweet Smile Finds Help to Raise Her Kittens and Never Has to Wander the Streets Again

They Never Gave Up on This Tiny Kitten, Now a Year Later..