Twin Kittens Insist on Staying Together, Helping Each Other Thrive

A pair of kittens came to their foster home for a chance at a better life. They share a lovely bond. 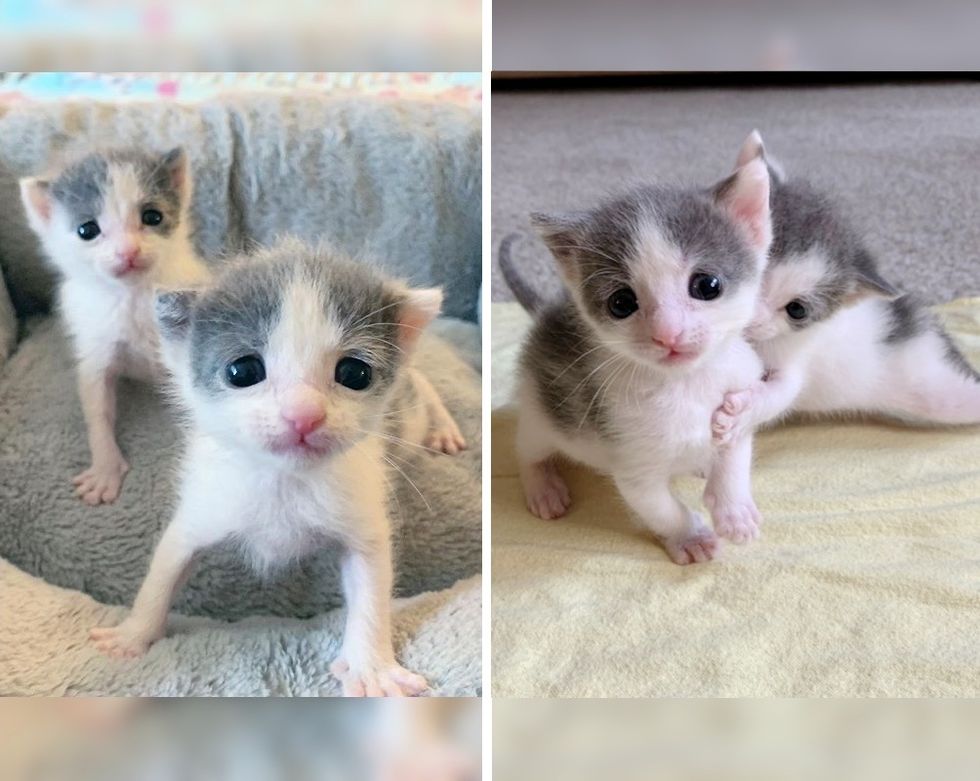 The Animal Welfare League of Arlington, an animal rescue in Arlington, Virginia, took in a litter of orphan kittens needing foster care. Among them, two brothers were in poor shape and required extra attention and care, around the clock.

Lauren Strycula, a foster volunteer of their Kitten College program, stepped up to help. She and a fellow volunteer worked together to ensure every kitten from that litter would have a fighting chance to thrive.

"I picked up Jace and Jax when they were eight days old. Saving kittens really does take a village, and it's only possible when everyone pitches in and helps each other out," Lauren told Love Meow. 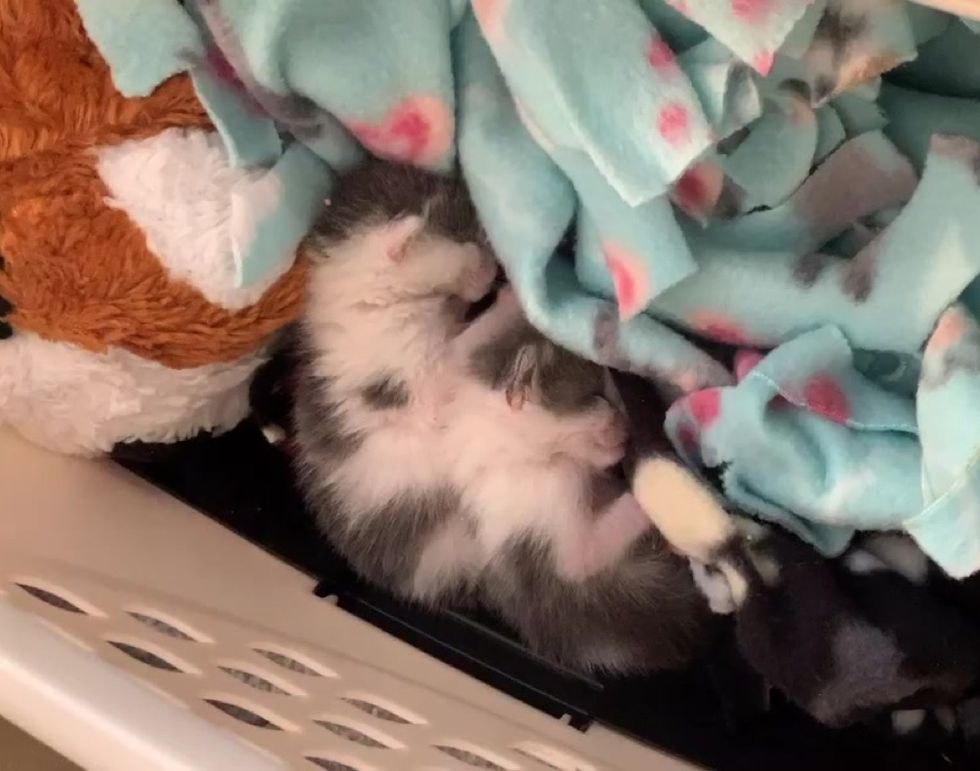 The first week with the two kittens was quite the roller coaster. They struggled to eat from a bottle and had health issues that kept them from getting enough rest. The brothers clung to each other for comfort throughout this time.

"We immediately started both kittens on meds, and happily, it only took a few days before things started improving. I could see a noticeable difference in their moods, and the boys finally began to make significant weight gains." 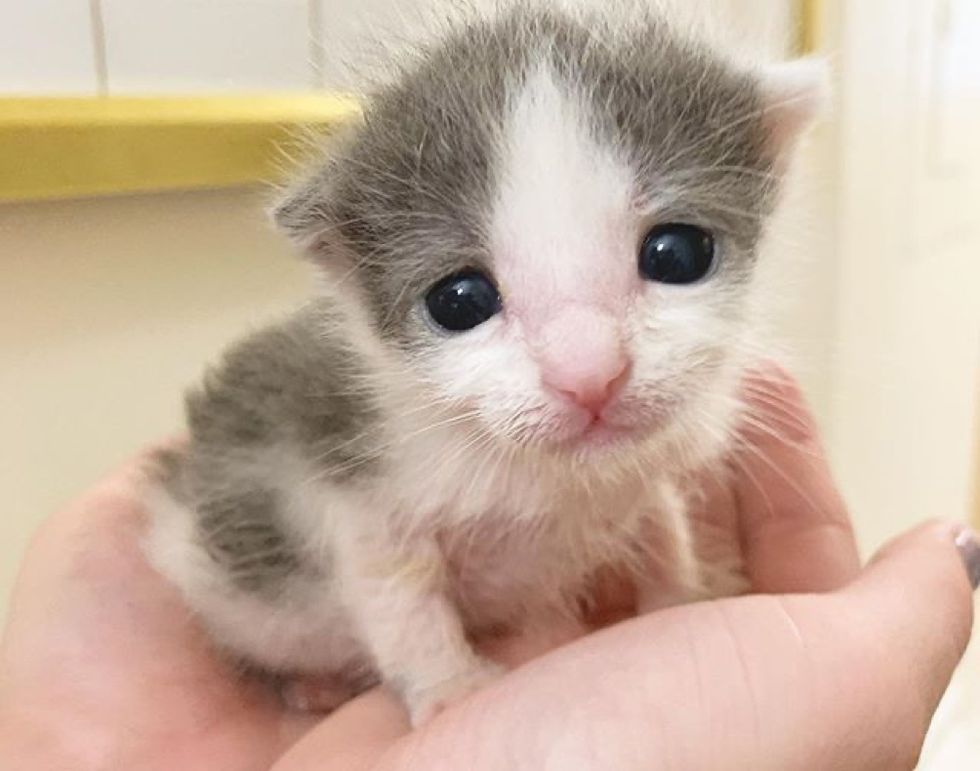 Jace, the weaker of the two, bounced back like a champ. He successfully latched onto his bottle and gobbled down the food as if there was no tomorrow. "I could have cried at the sight of Jace's first ear wiggles," Lauren said.

His energy immediately rubbed off on his brother Jax, who was motivated to eat just as much. The duo began to pack on the grams and gain strength. Their personalities also started to shine. 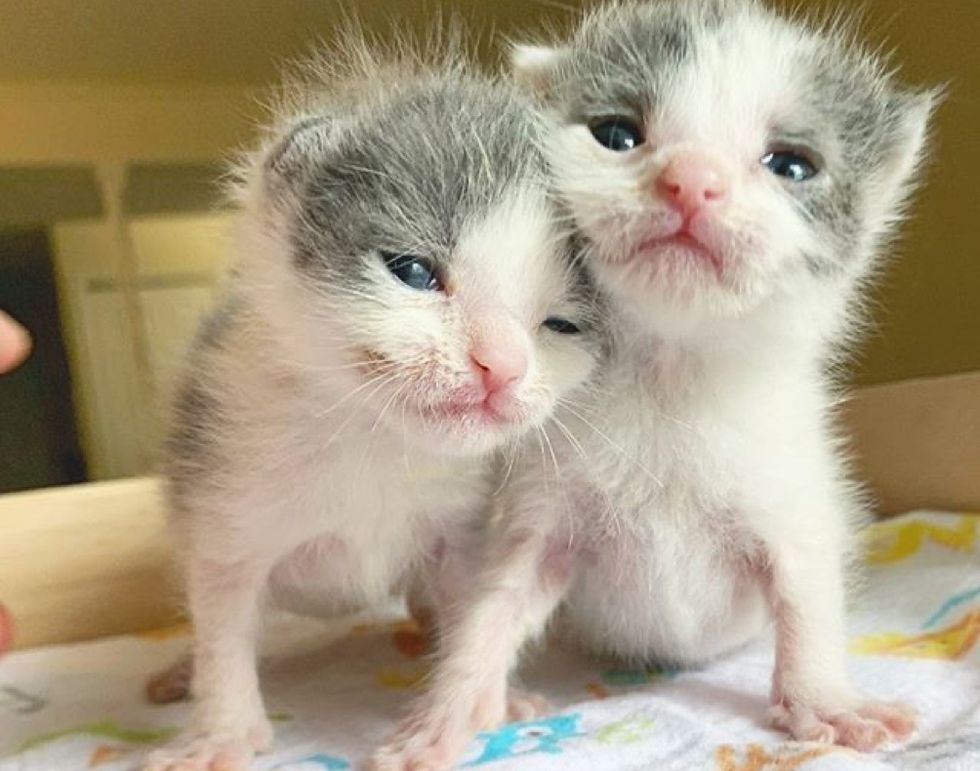 "We affectionately call Jace our little weirdo because he has the goofiest personalty. We are always cracking up over his silly sleeping positions and his quirky antics."

While Jace is the mischief-maker and constantly demands affection, Jax is the more mellow twin and has a very sweet temperament. The two complement each other perfectly as yin and yang. 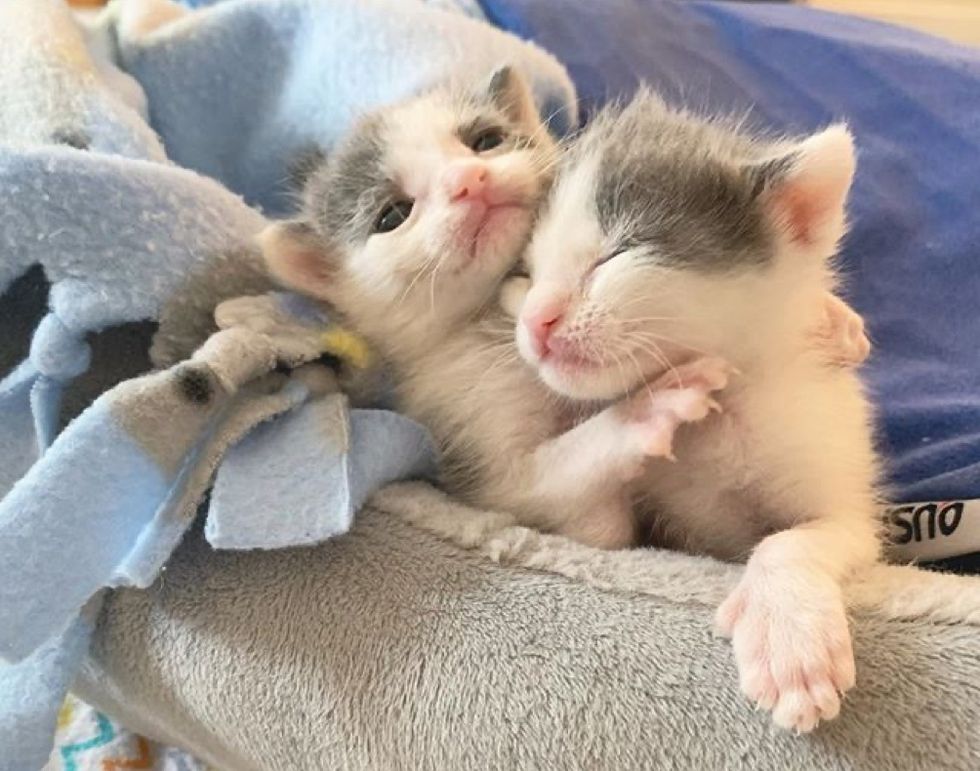 They look almost identical but are unique in their own ways.

"You can tell Jax apart from his twin brother because he has a perfect triangle as a blaze and a left white ear," Lauren said. "Jace's blaze is a little crooked (like his hat) and he has a right white ear." 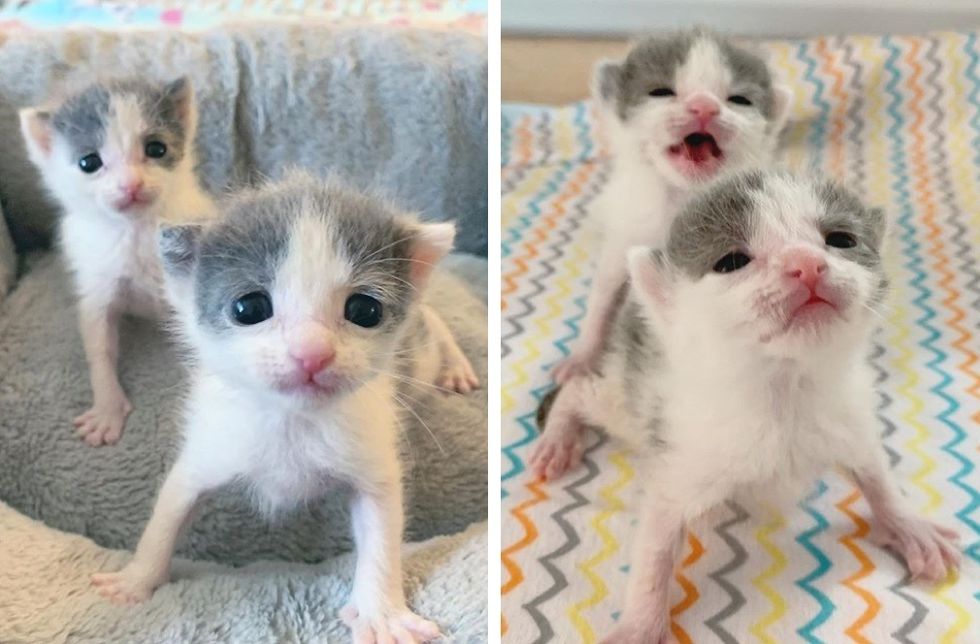 Watch Jace and Jax in this cute video:

The twins started nursing on each other for comfort, a habit often seen in orphan kittens. "This can be harmful for both the kitten being suckled on and the kitten doing the suckling, and it's critical to nip the behavior in the bud."

While keeping an eye on the kittens, Lauren got some help from a plush toy, aptly named Snuggle Lamb, and placed it between the twins so they could nurse on her instead. 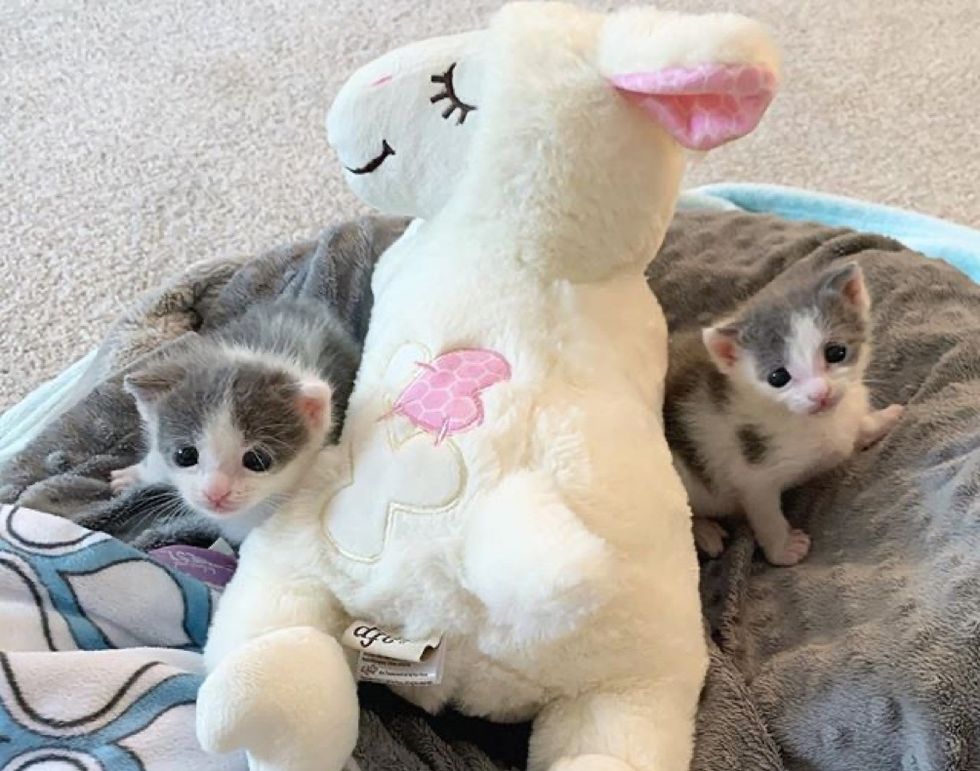 "After all, just like humans during a global pandemic, kittens still need to be able to see and be near each other."

Now at four weeks old, Jace and Jax are growing out of that habit as they are stepping into their next stage in life. 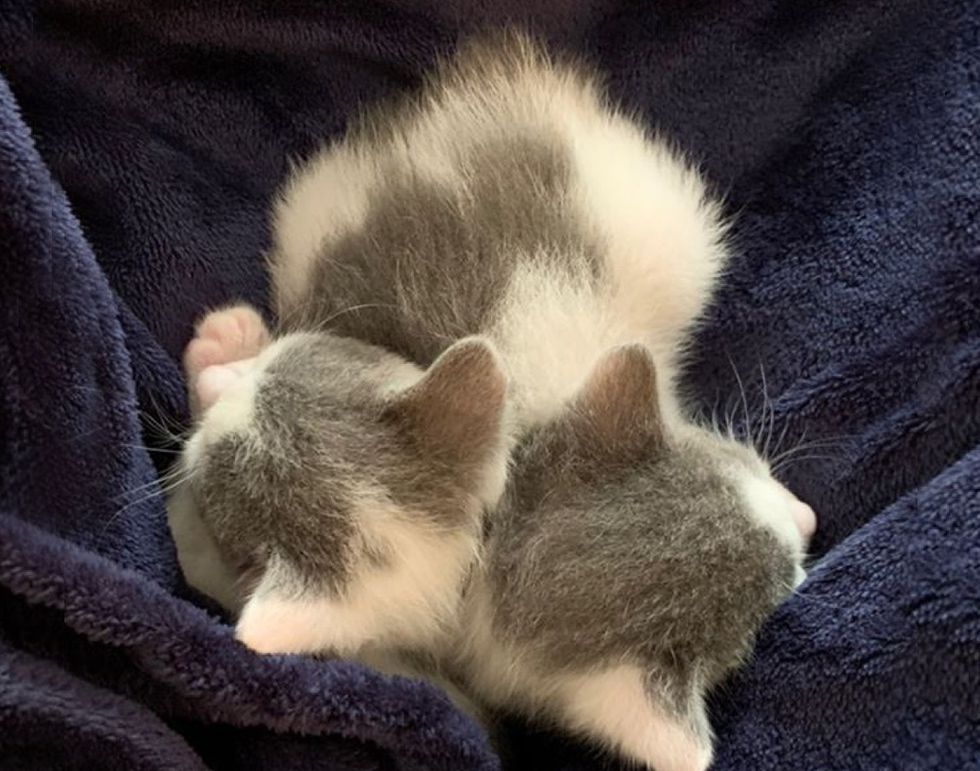 "The boys are constantly wrestling with each other. I'll just glance over at their bed and see a tangle of flailing legs and paws," Lauren told Love Meow.

"They are the best buds and do everything together." 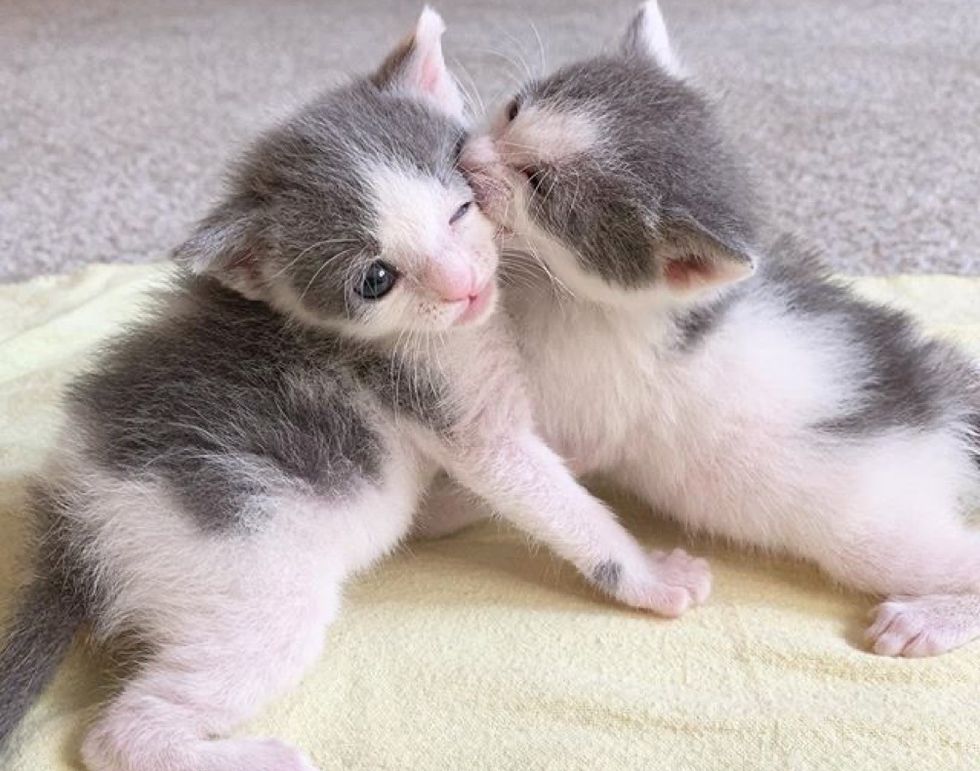 Jace the rambunctious one keeps his brother very busy. He constantly wants to play and won't take no for an answer. 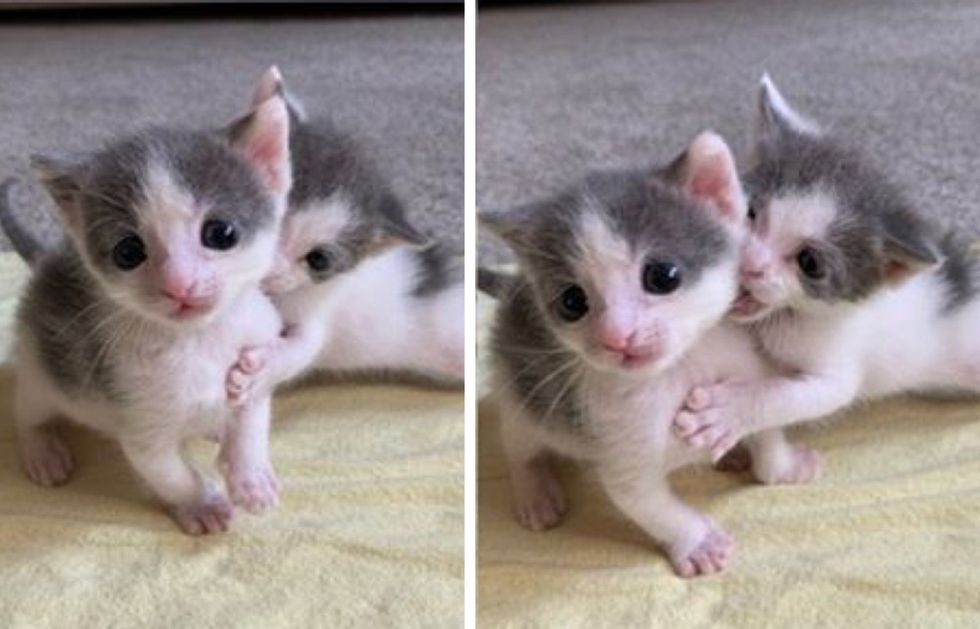 The twins are thriving in foster care. Lauren and her family celebrate their weekly milestones and are so proud of how far they have come. 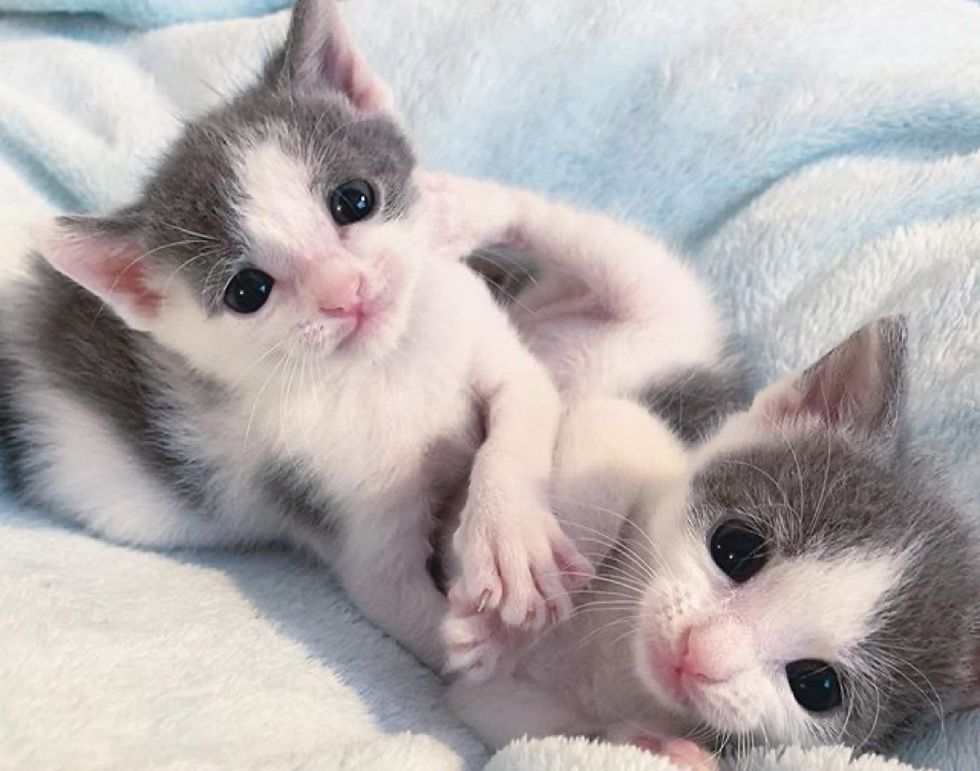 Related story: Kittens Never Leave Each Other's Side After Being Found Together in a Storm