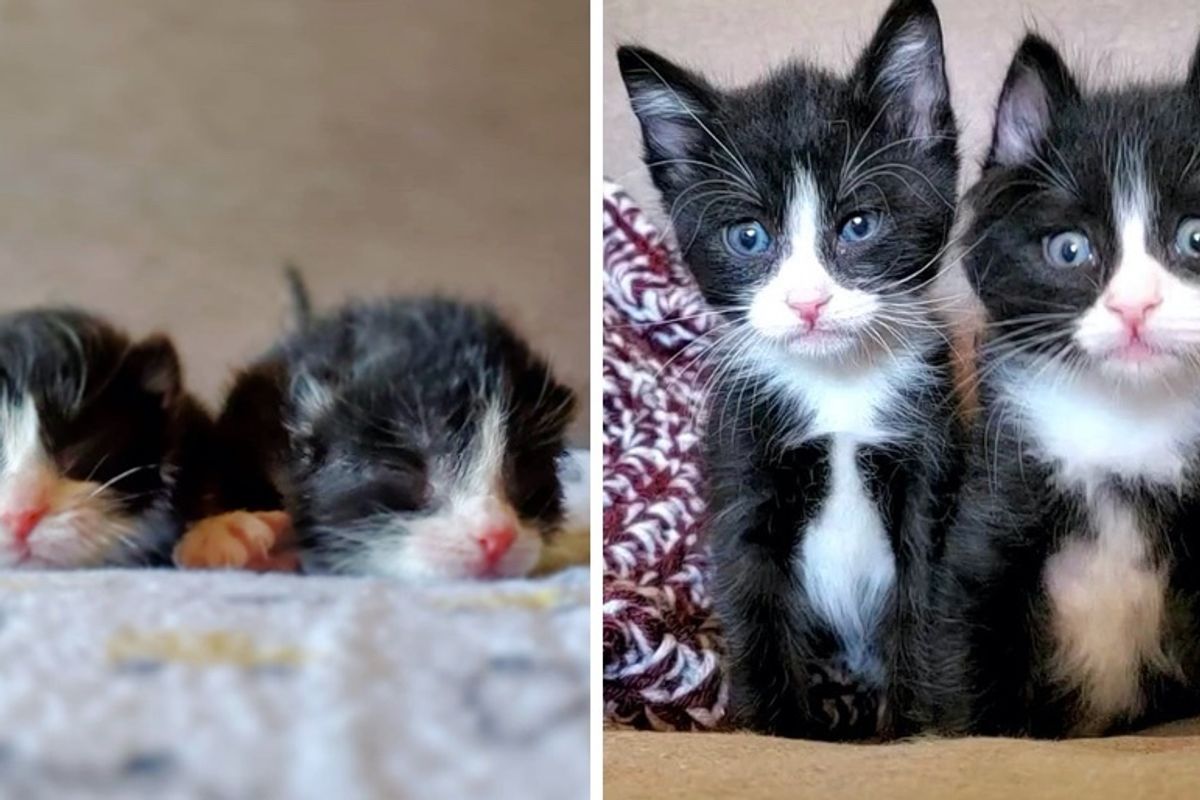 Two tuxedo brothers who were found in a storm, share an amazing bond.

A few weeks ago, a resident from Central Phoenix, Arizona discovered a pair of abandoned kittens near a dumpster. They were so young that their eyes were still closed, and they would have to be bottle fed.

Shelbi Uyehara, founder of Jin's Bottle Babies, received requests about the feline brothers the next morning, and rushed to their rescue. "They were found boxed up by the dumpster in the middle of a storm. These two are quite remarkable for not only surviving that, but also surviving almost 12 hours with no food," Shelbi shared with Love Meow.

"I fully expected them to be in rough shape when I went to pick them up, but they were quite the opposite."

The two brothers huddled up together the entire time, keeping each other warm and comforted. Shelbi bottle fed them in the car before driving home so they could have some warm food in their bellies.

"They ate so well and even purred. They were so active and alert and I'm pretty sure they could have survived anything."

Shelbi placed them in a cozy incubation (to help regulate their body temperature), and thought the little ones would settle in for a nap.

The two brothers were full of energy. "They were climbing up the sides of the walls and trying to do a jailbreak as neonates."

The kittens showed incredible strength and will to live at just a few days old. They crossed their arms when they napped and were always in good spirits as long as they had each other.

Watch the two brothers in this video:

"We named them Jones and Shiro. They are very much a bonded pair, and are the best brothers."

Before they found their footing and started to explore, Jones and Shiro were constantly cuddling and licking each other's faces.

When they figured out how to use their legs, they waddled out of their nest together, seeking their next adventure.

The tuxedo brothers are completely inseparable. They do everything together and copy each other as they grow.

Shiro is the tinier one of the two but he's a mighty little kitty!

Jones is brave and outgoing. He is quite the character and loves to create mischief with his brother.

"He is an oddball and he's got so many quirks."

"Jones hops all over the place and stalks imaginary prey. He loves to have his belly and paws rubbed and will lay on his back in your arms, like a baby," Shelbi told Love Meow.

"Shiro is the first to run up to me when I enter the foster room. He is tiny, but just like his brother, he also stalks imaginary prey."

Knowing how close the kittens are, Shelbi knew they couldn't be separated. A few days ago, the rescue received great news for the bonded brothers.

A wonderful family fell in love with the pair. "I'm so happy to announce that they are being adopted together!"

"We may not be able to save a million cats, but we definitely make sure the ones we can save are set for life from the second they're in our care," Shelbi said.

"This, to me, means making sure once they're through with us, they're adopted into homes that are even better than ours. Their life is going to be very sweet."

Related story: Kitten Guards and Comforts Her Brother After They Were Rescued from the Street