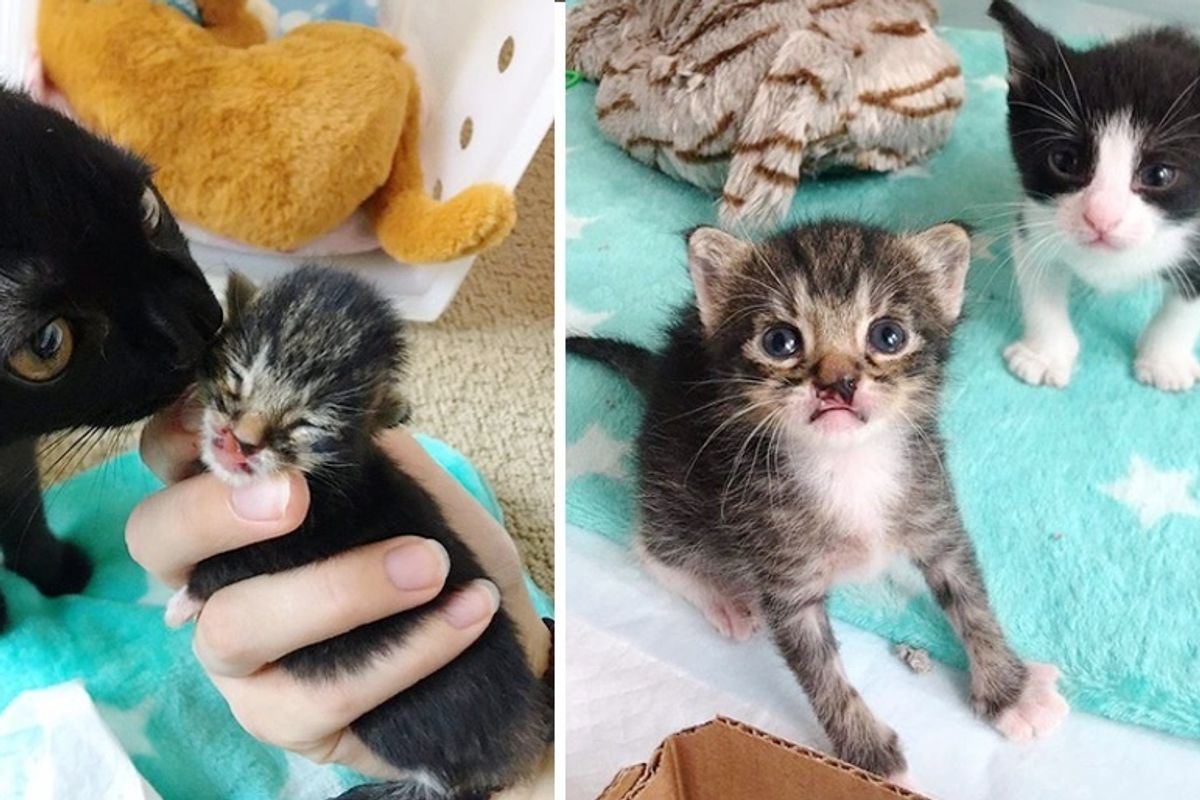 A tiny kitten with a cleft lip found the perfect friend after being rescued from life on the streets.

A Good Samaritan from California spotted a little tabby outside without a mother or siblings. With help from local rescuers, the kitten was safely transported to Ashley Kelley, a foster volunteer of Wrenn Rescues (an all-volunteer rescue in Los Angeles).

The kitten named Jurgen was born with a cleft lip and the sweetest meow. For the first two weeks of his life, he was battling severe pneumonia and other health issues. He was so tiny but hung on with incredible resolve.

There were moments when Ashley wasn't sure if the kitten would make it, but she continued to fight alongside the tabby, taking one day at a time. With antibiotics, nebulizing treatments and oxygen, things began to look up.

Aela, another foster who also has a cleft lip, came in to give the little buddy some encouragement and a quick sniff.

"Oxygen made a major, immediate difference for him. His color improved, his voice was back, and he was squirming around at feeding time," Ashley shared with Love Meow.

As he got stronger, he eagerly looked forward to breakfast, purring and making biscuits galore in his comfy incubator. "I was so proud of him and kept telling him all the wonderful things he had ahead of him in life."

Jurgen really enjoyed being groomed by using a toothbrush, which simulates a cat mother's tongue. After another week of painstaking care, the tabby boy perked up and started to move around with his new-found energy. He was holding steady on treatments and continued to put on weight every day.

At around two weeks old, he graduated from oxygen support and most of the treatments and medications, and was back to being a normal neonate.

"His growth was halted for several days while he was very sick." As soon as his body healed up, the tabby was on a mission to grow big and strong by eating to his heart's content. He gained a voracious appetite and became a major purr machine.

"He loves to climb up into my face and rub all over it and purr. If I'm not actively loving on him, he is crying for me to come back in and pay attention to him," Ashley told Love Meow.

Jurgen loves being doted on by another cat. Ashley knew just the perfect friend to pair him up with.

Right before Jurgen was brought into the rescue, another singleton named Luca arrived with a similar story. He was left behind by his cat mom who never returned for him. A kind person scooped him up and rushed to get him help.

Luca, weighing just 95 grams at the time, was determined to bulk up. He latched onto the bottle like a champ and gobbled down the food as if there was no tomorrow.

When Jurgen finally caught up in size, it was time for the two to meet.

Luca immediately took to Jurgen and started following him around.

"Jurgen protested at first but once Luca got sleepy and cuddly, Jurgen curled up to him and they napped together and sealed the deal! They've been best buds ever since," Ashley told Love Meow.

Luca doesn't have the best eyesight and most likely has tunnel vision.

"He is very timid due to his visual impairment, and Jurgen helps him feel confident. He will follow Jurgen to explore but would never venture out on his own."

Luca likes to follow his buddy's lead when they play and curl up next to him when they nap.

"Jurgen is such an enthusiastic eater these days! He is extremely outgoing, affectionate and playful, always purring," Ashley added. "Luca is very shy, and any loud noise sends him scurrying."

Having Jurgen by his side, Luca feels more assured, and the two friends complement each other beautifully.

"We would love to find them a home together since Jurgen gives Luca so much confidence and he explores by following Jurgen around."