Three ginger kittens stick together and help each other thrive after being rescued from outdoor life. 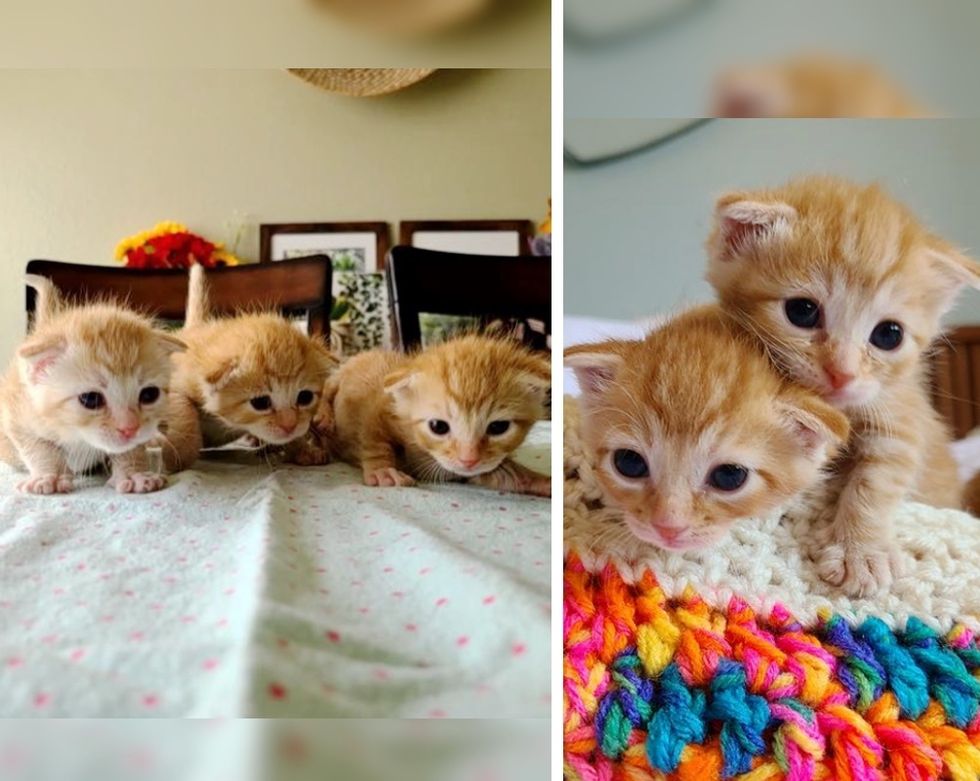 Early August, a Good Samaritan found three tiny kittens in a large apartment complex in Arizona. She discovered them in a rough situation and knew she had to help.

At about five days old, the kittens' eyes hadn't opened yet, and their mother was nowhere to be found. A few male cats were seen in the area trying to take them away. Many male cats in the wild don't tolerate kittens, especially those that they didn't father.

The kind woman immediately reached out to Jin's Bottle Babies, a local animal rescue, for help. "We decided to take them in because that area was just not safe. And they were sick with an upper respiratory infection (URI)," Shelbi Uyehara, founder of Jin's Bottle Babies, told Love Meow.

The ginger kittens, all girls, were named Jenny, Becky, and Lizzy. 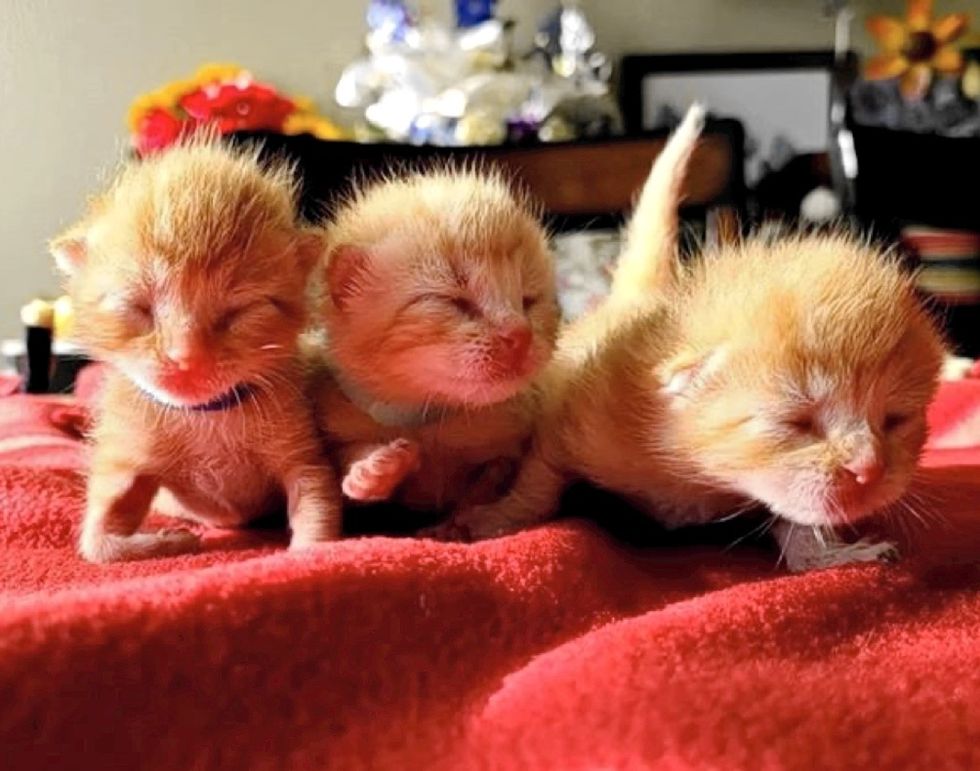 Taryn and Melissa, TNR (trap-neuter-return) rescuers, volunteered to get the feline triplets to safety and transport them to the rescue. The kittens were very fragile and huddled up in a pile, trying to stay together and keep each other comforted.

Shelbi took the trio into her care so she could start them on antibiotics and bottle-feed them around the clock. 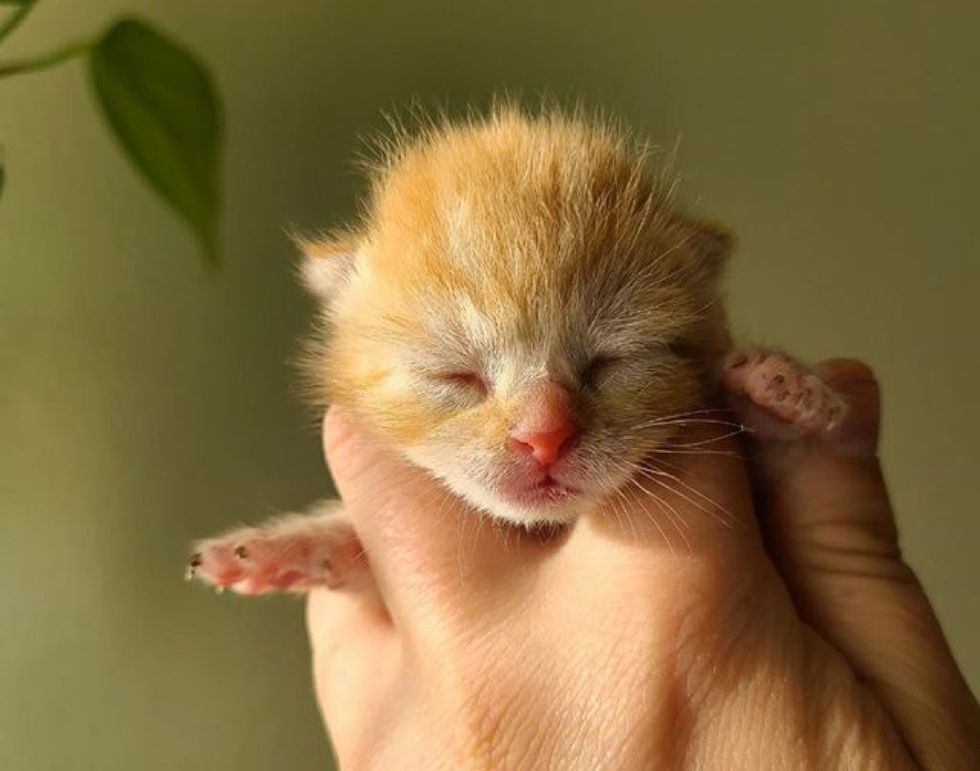 "They had very bad congestion and sneezed a lot due to upper respiratory infections. You have to watch URIs very closely when the kittens are that young, because it can easily become pneumonia," Shelbi shared with Love Meow.

Over the next few days, the three ginger girls spent most of their time sleeping in a cuddle puddle inside of a cozy incubator filled with soft blankets and snuggle toys. They were never apart except for the time when they were individually fed with a bottle. 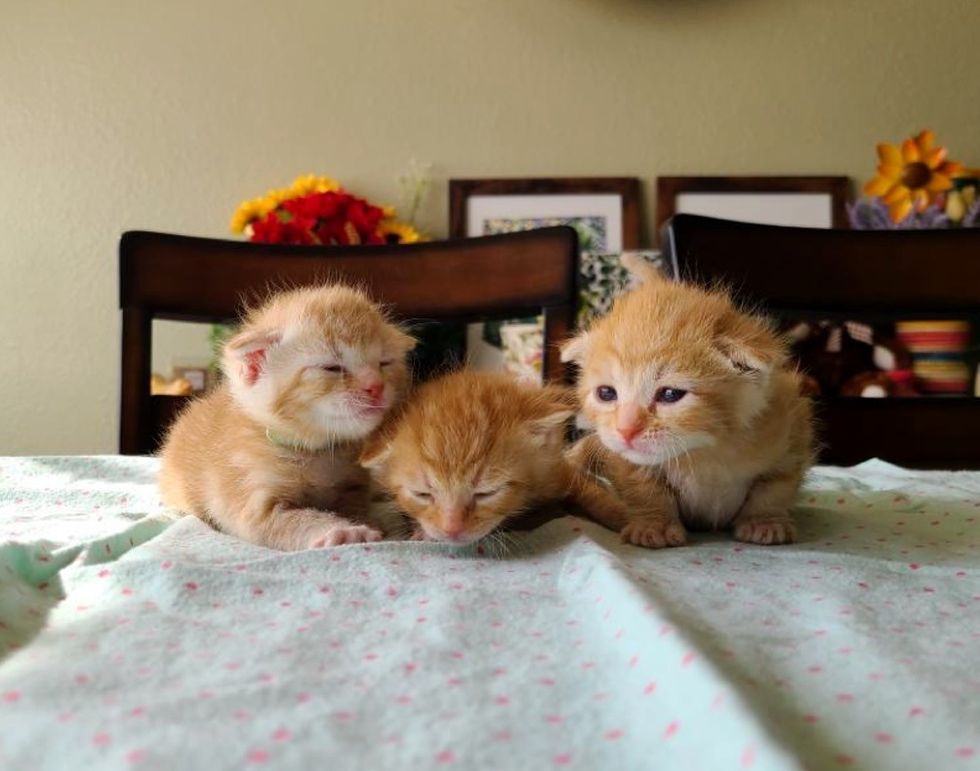 The triplets bounced back on their paws like champs. "Within a couple of days, their URI cleared up. They also had a bout with a parasite, but nothing was ever enough to get them down," Shelbi added.

Not only did they open their eyes around the same time, but they also ventured out of their nest together as a trio. They cheered each other on as they journeyed to their recovery.

"They've been the easiest group we've had in a while! The hardest part is trying to tell them apart." 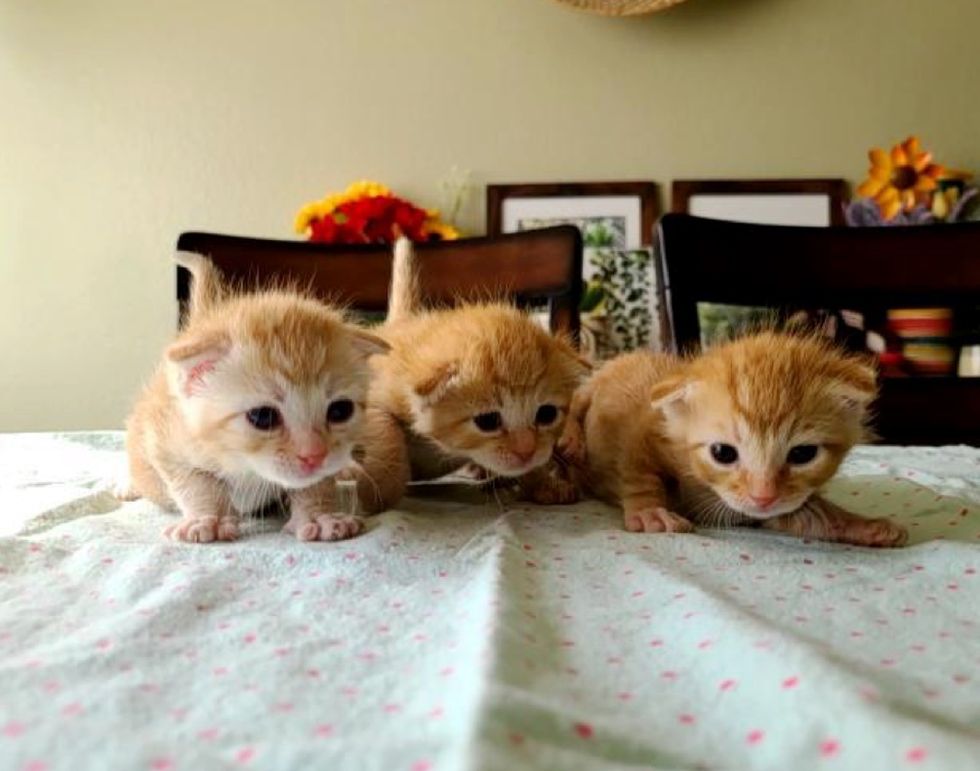 "Jenny looks like an angel to me. She has a lot of white on her face and glows. Lizzy has a long bod and is a darker shade of ginger. Becky is round. She has the roundest face and the cutest, roundest eyes," Shelbi told Love Meow.

Watch the triplets in this cute video:

"I sometimes have to do a double take with Lizzy and Becky. These three little ladies are super cute. Their floppy ears make me smile 100% of the time." 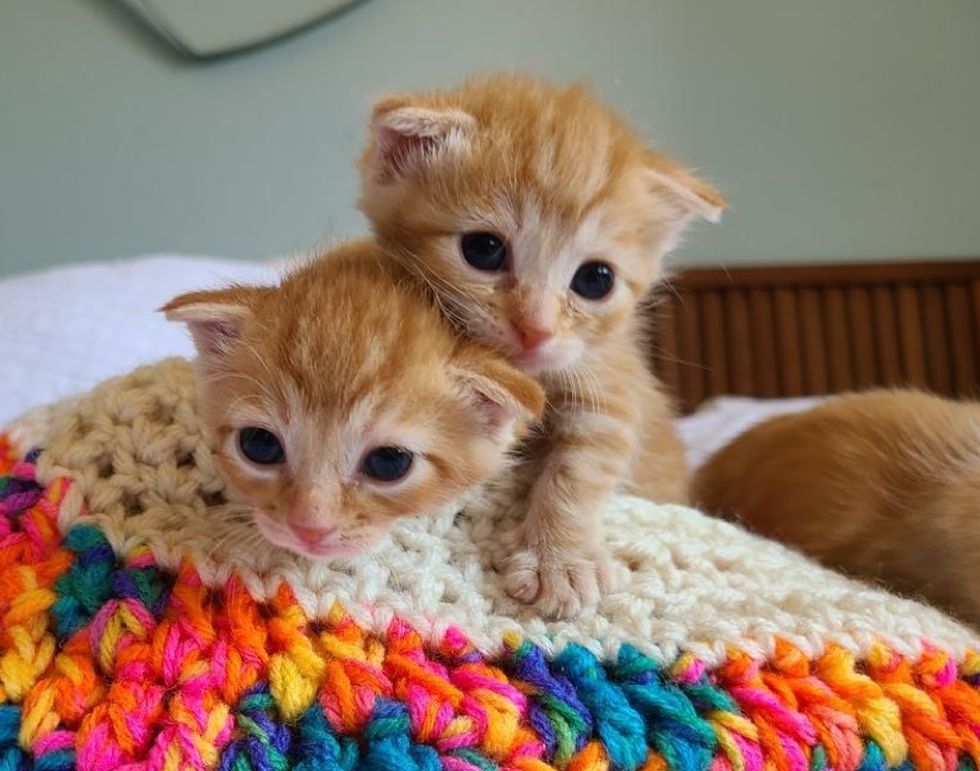 Around that time, Shelbi took in another litter of four that needed bottle feedings. They were the same age as the triplets, so when they got older, Shelbi knew just the feline friends to introduce them to.

She placed the kittens alongside the triplets and hoped they would accept their new buddies. 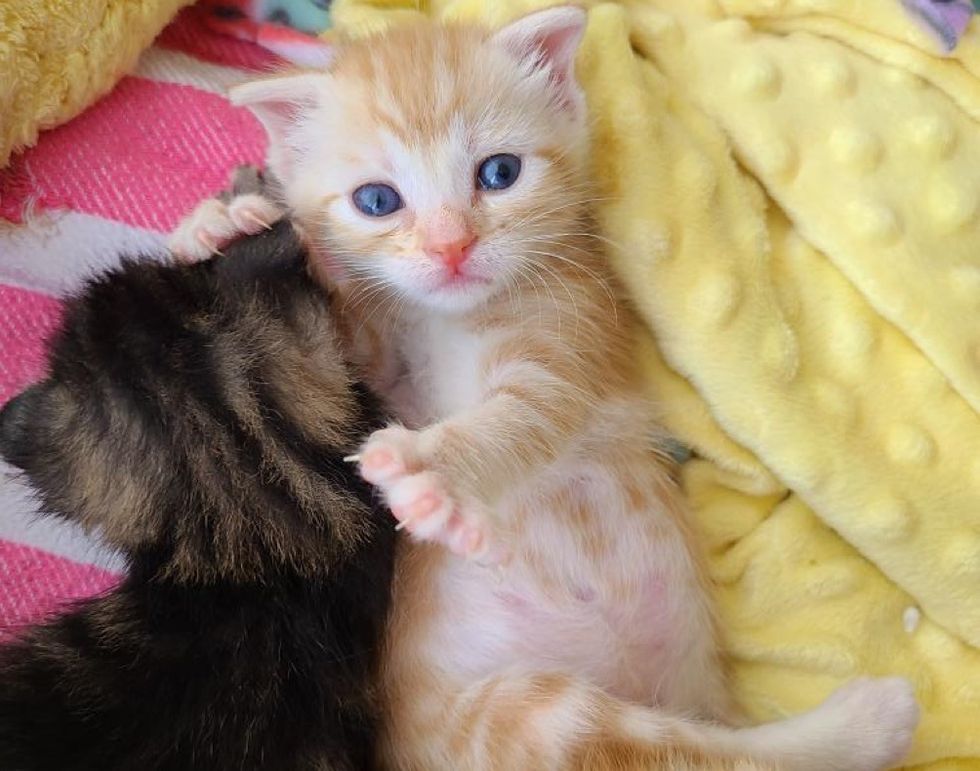 The ginger girls took to them right away with open paws, as if they were their own siblings. They quickly started to play together and pile up in the same cuddle puddle when they napped.

"Now, they are one big super pride of tiny lions," Shelbi said. 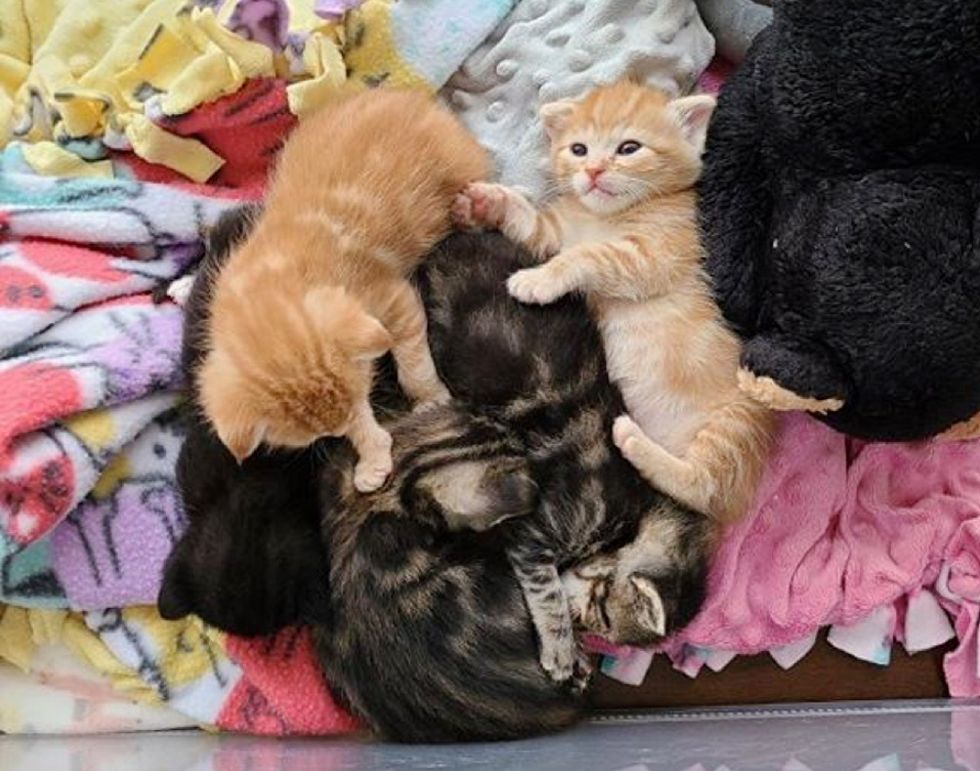 At three weeks old, the triplets are thriving. They like to show off their chonky bellies, and their feet constantly go in all directions. The feline sisters and their friends are starting to learn to waddle. 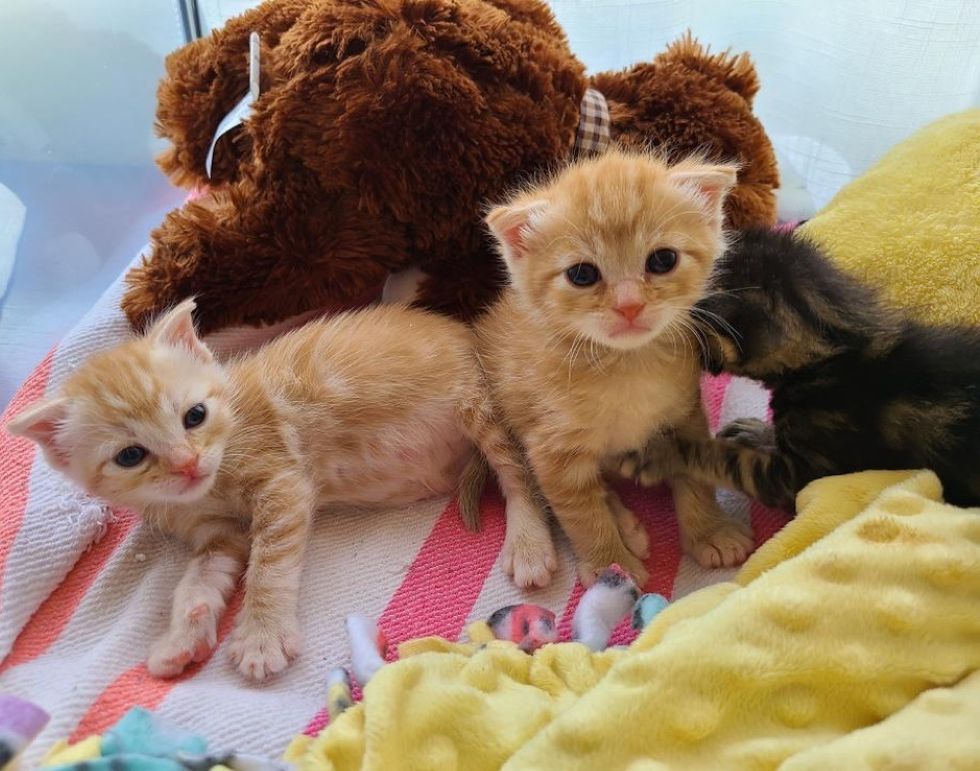 "They love to roll around on their backs and laze around together. They are always piled up on each other, purring and pawing each other's faces, trying to catch each other's tails," Shelbi said. 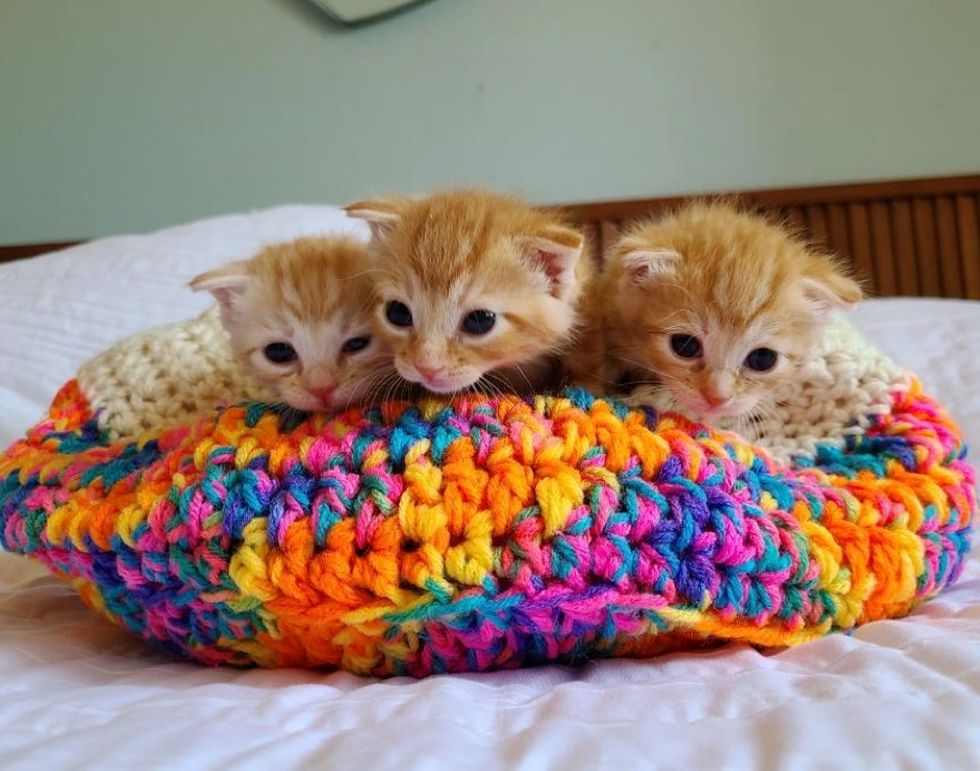 Related story: Kitten Guards and Comforts Her Brother After They Were Rescued from the Street