Early October, a Good Samaritan found two orphaned kittens and brought them to the shelter. An hour later, she came back with a third kitty. They were crying for their mom who was nowhere to be found. 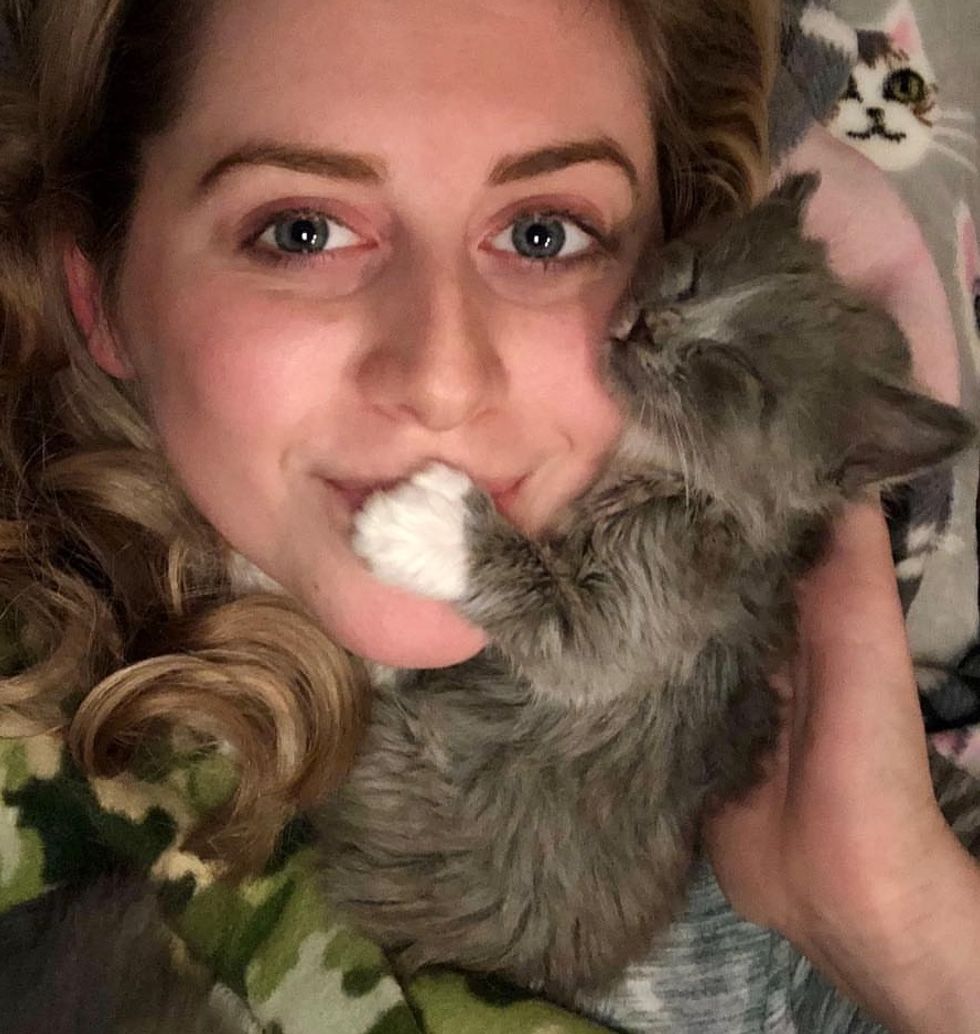 The kittens were very young and still needed to be bottle fed. Purrfect Pals contacted Ashley, a foster/rescuer based in Everett, Washington. She stepped up to help as the kitties, Steven, Karen and Georgia, needed dedicated care. "They were covered in fleas and very hungry," Ashely said.

The three tiny bundles of fur were just skin and bones when they arrived. After scarfing down all the food that their little bellies could possibly fit, they curled up in the crook of Ashley's neck and purred themselves to sleep.

"They don't have a mom, so they think I am theirs!" 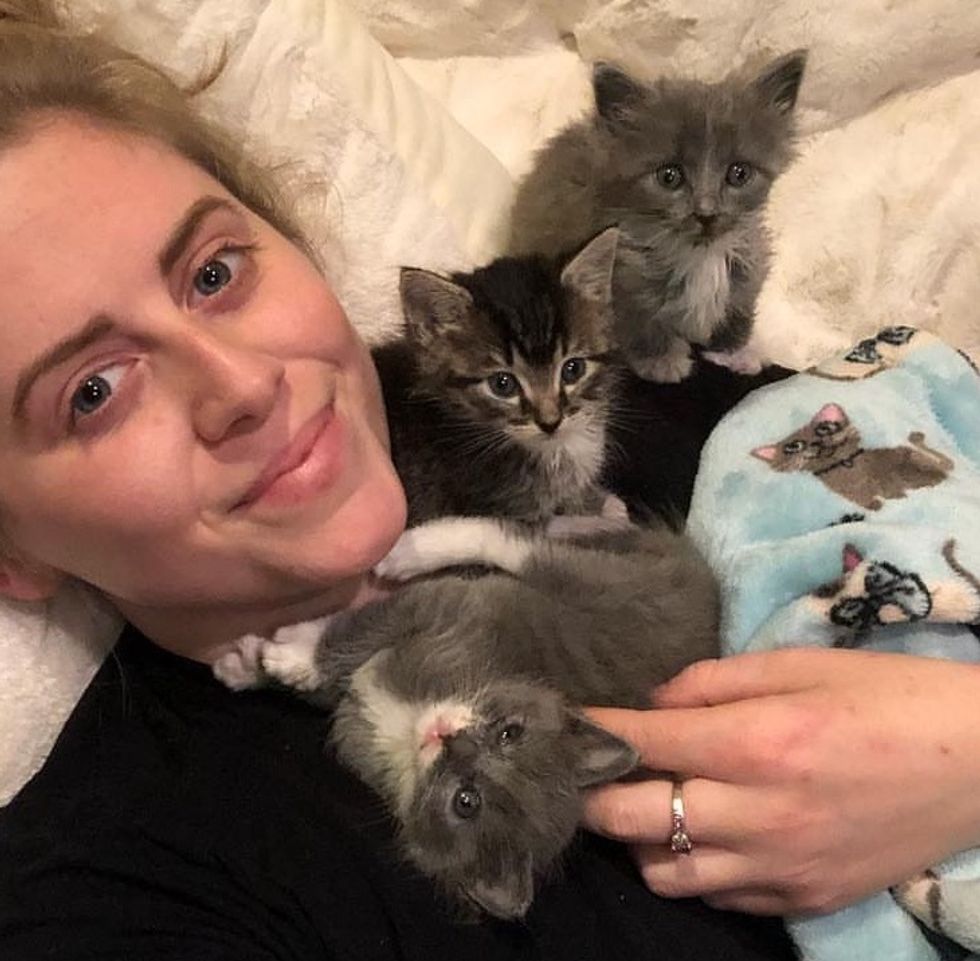 The kittens had to deal with many health issues. Georgia was not feeling well and had a difficult time adjusting to the new diet.

"It's so hard on their tiny systems. Who knows when they had last eaten, or what happened to their mom. Their stomaches were so sensitive so to switch to formula was rough on them," Ashley said. 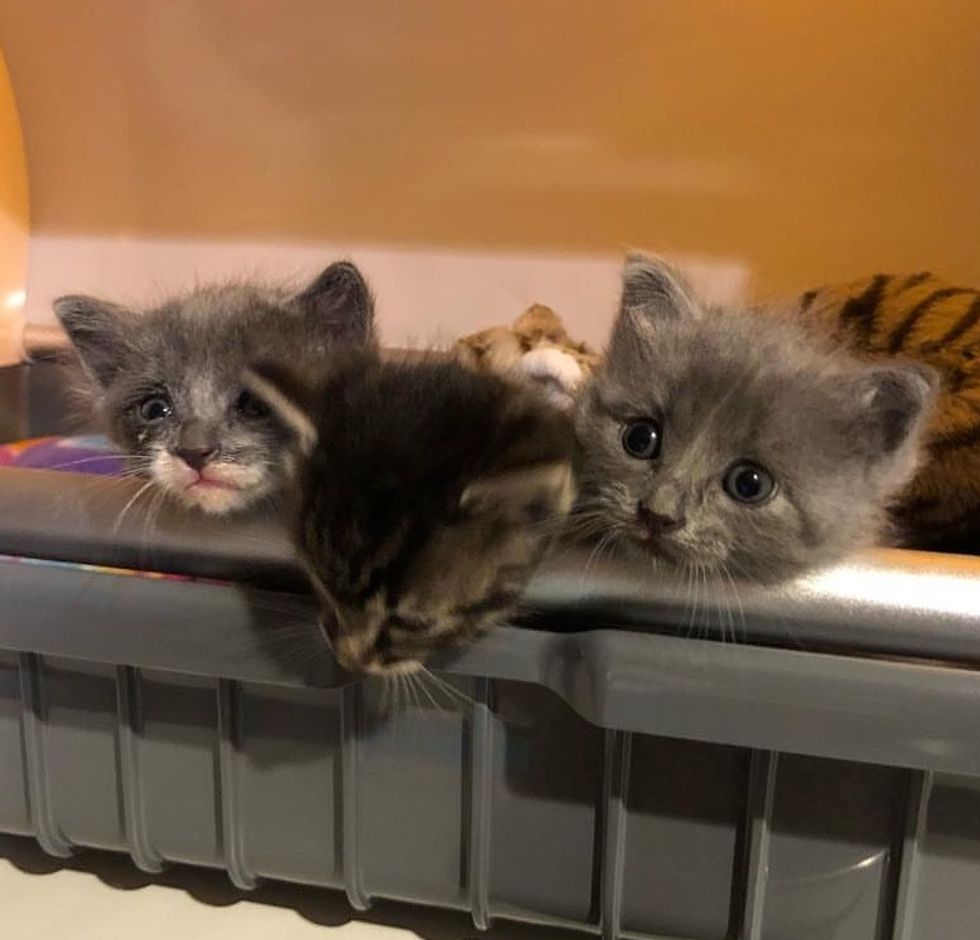 The runt of the litter, Steven, was much smaller and very delicate. "We weren't positive that he would make it at first. After a few days in the heated incubator and with regular and over night feedings, I saw a fast improvement."

Steven has extra toes on each paw. 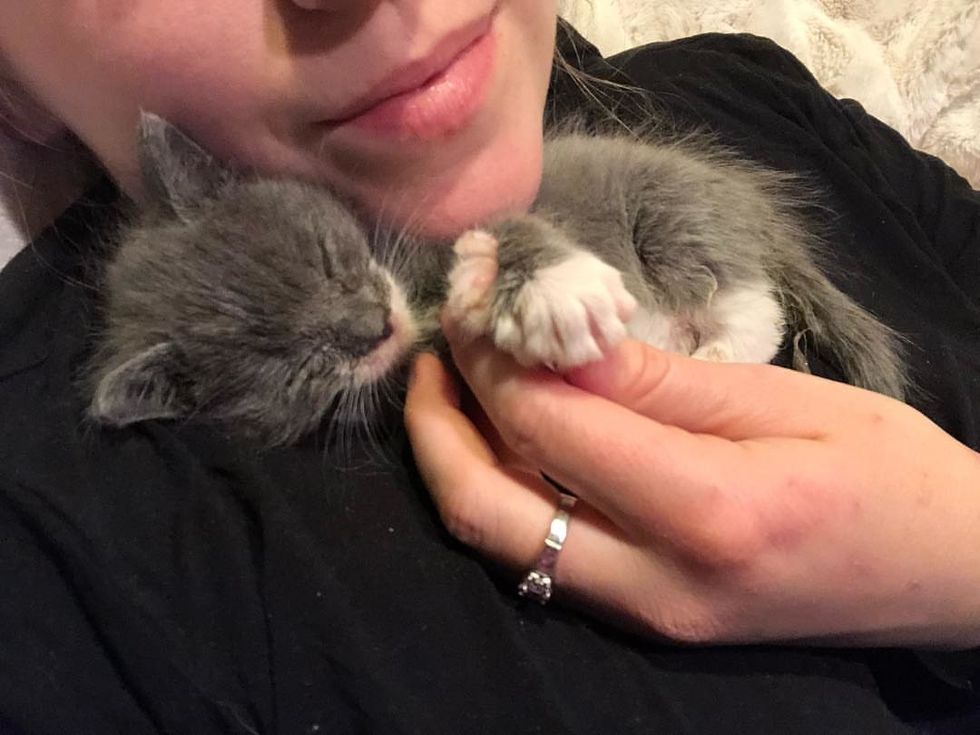 The kittens were all fighting an upper respiratory infection. "It is very common in orphaned kittens since they have a weak immune system," she added. "At night they sleep in the incubator with the humidifier to keep junk out of their lungs."

Little Steven gets his daily nap on Ashley's shoulder. 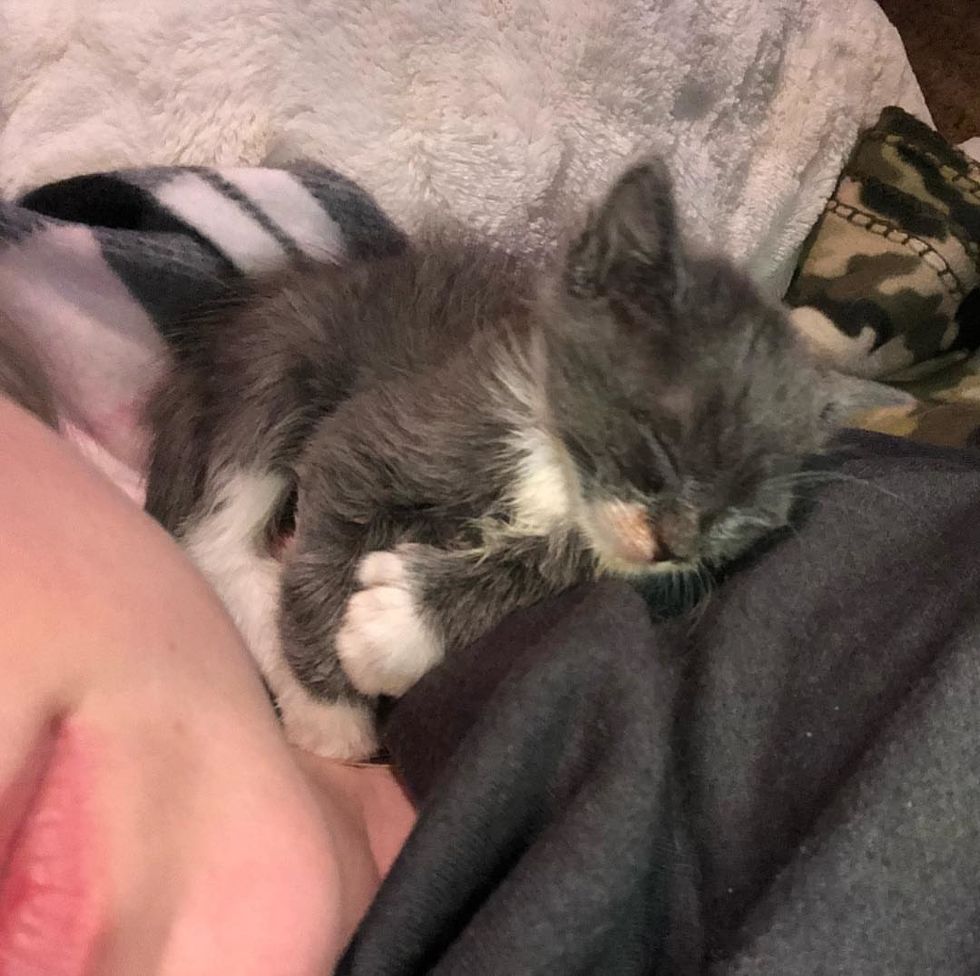 Ashley often found herself passing out with the kittens on her shoulder or neck. Despite having cat beds in the room, the trio always nestled in with their Foster Mom when they slept.

"They just love to cuddle and purr and I want them to be healthy as possible!" 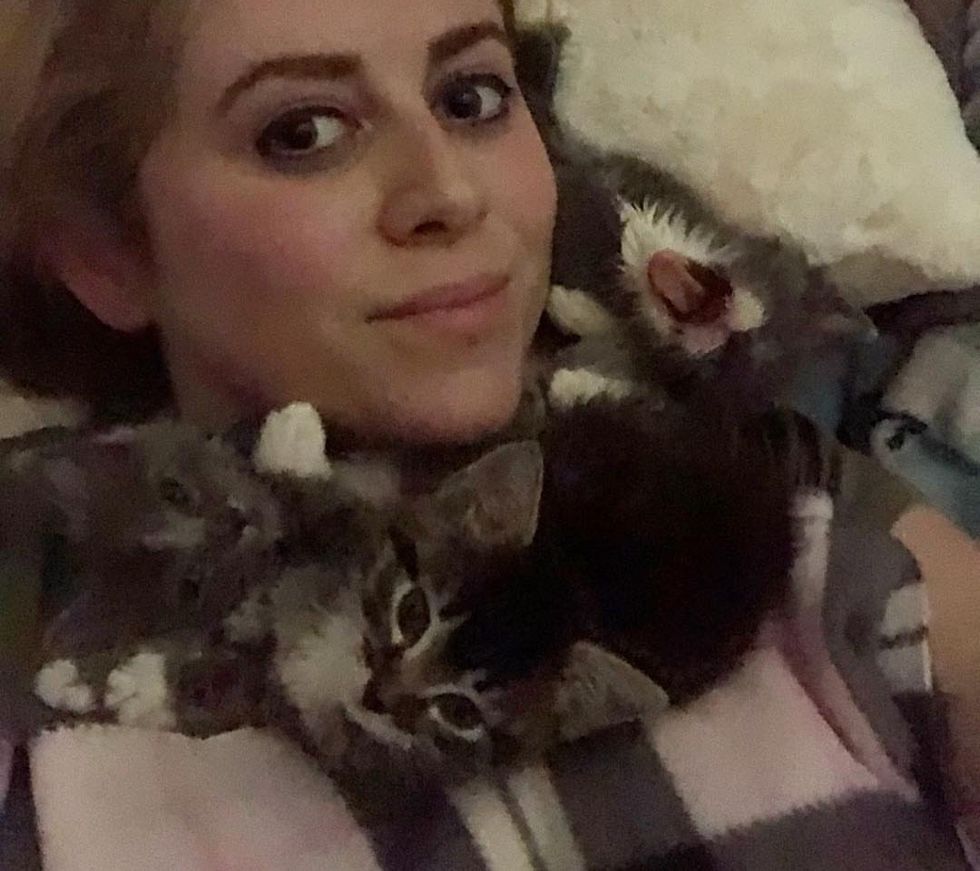 The kittens start purring the moment they see Ashely and run to her for kisses. "Steven is the first to run out to greet me."

Once she sits down, the kittens will crawl their way up her shoulder or neck. Ashley couldn't help but oblige to their every demand and cuddle along for as long as it takes. 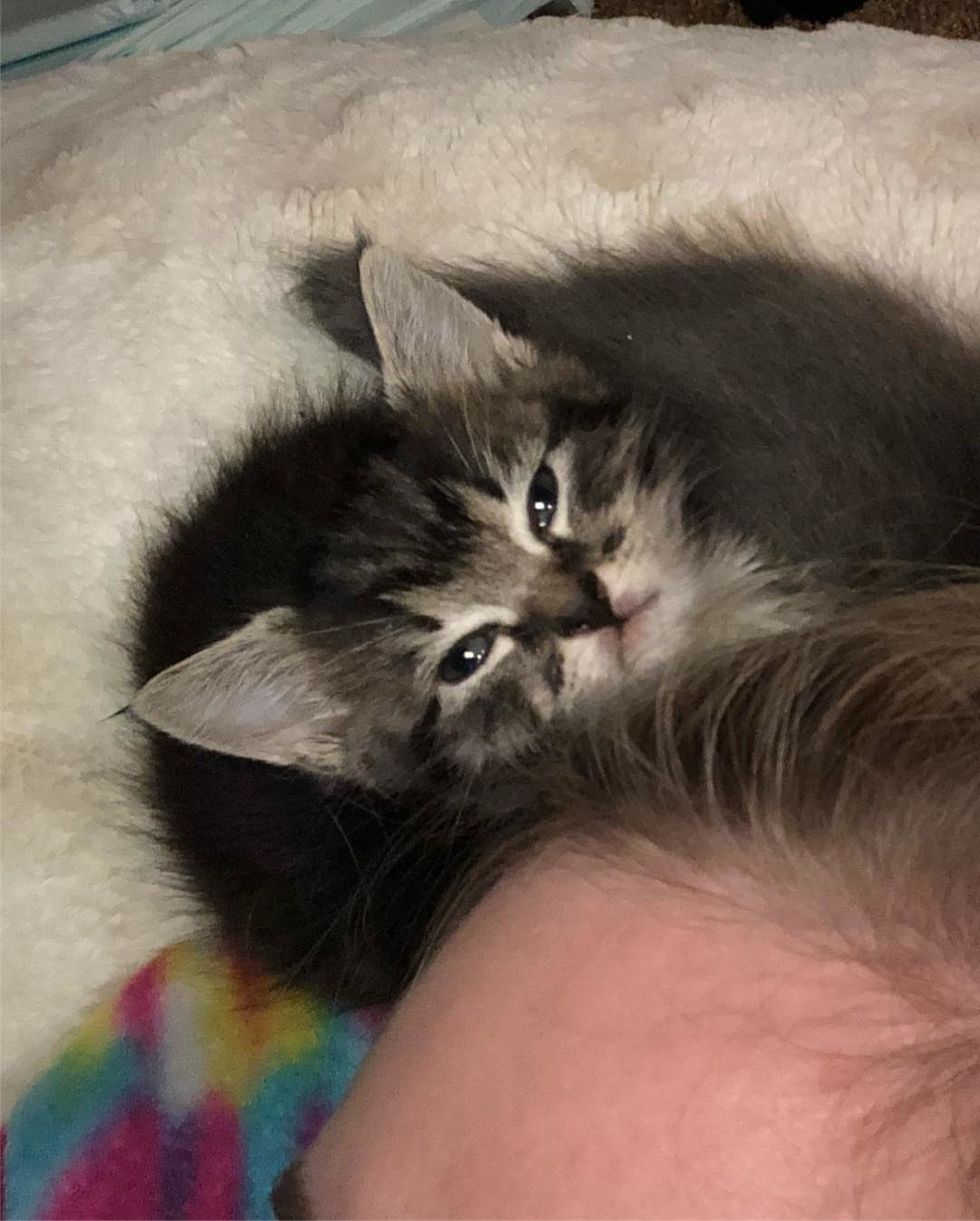 For the past several weeks, the kittens learned to eat solid food and clean themselves with help from their Foster Mom. They will never be alone or go hungry again.

The three tiny musketeers who were found without a mom, now have someone to cuddle with every day. They are living the VIP life they so deserve and are thriving in love, comfort and constant cuddles. 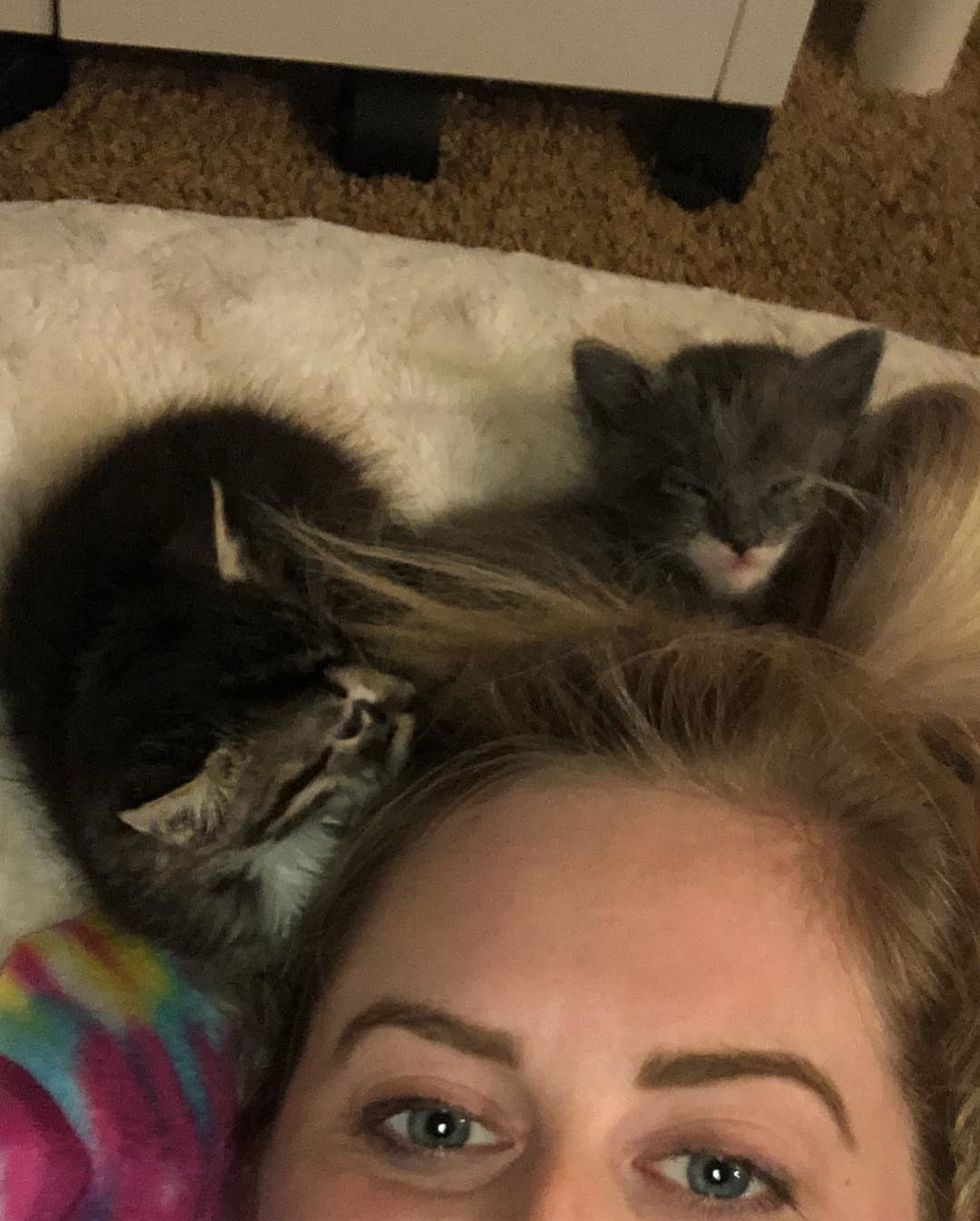 Ashley is currently fostering several litters of kittens. When they all demand cuddles at the same time, this happens.

"This is my preferred way to watch movies." 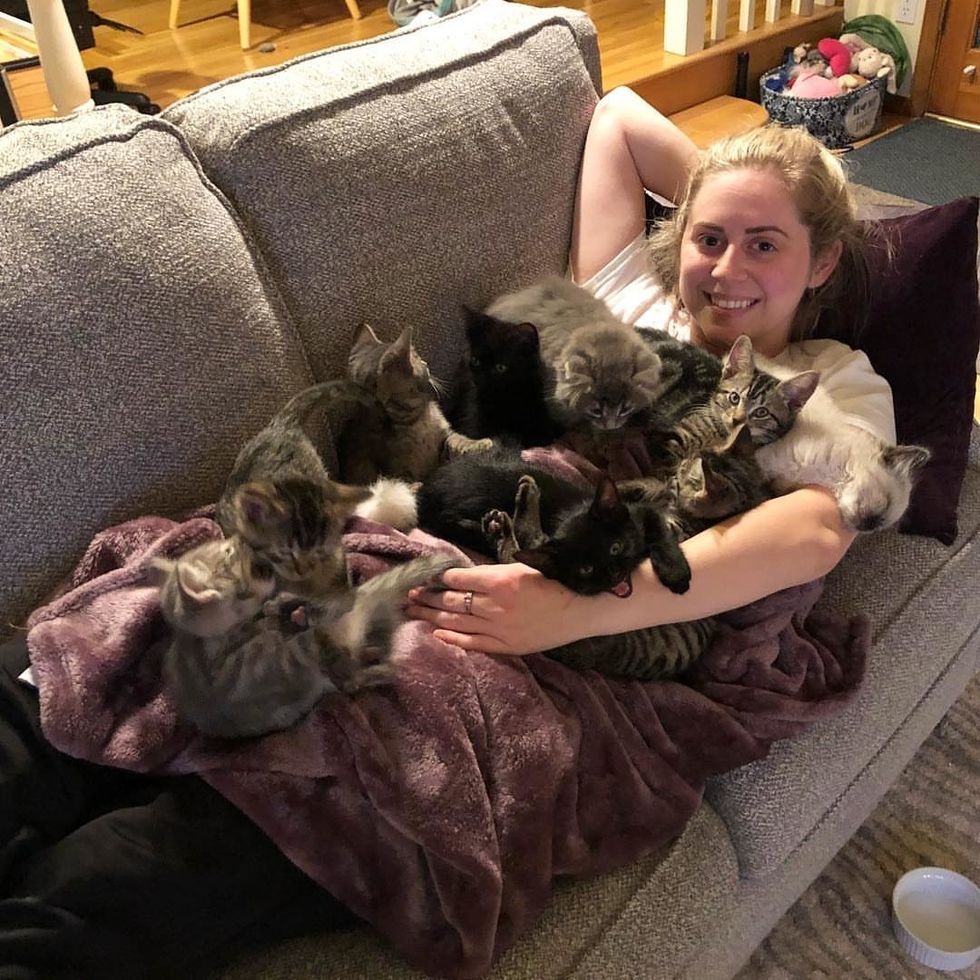 Watch Ashley and the cuddly kitties in this cute video:

Orphaned Kittens insist on cuddling foster mom like this every day youtu.be

Related story: Kitten with Cute Bed head Saved by Woman Who Found Her Abandoned at a Few Days Old