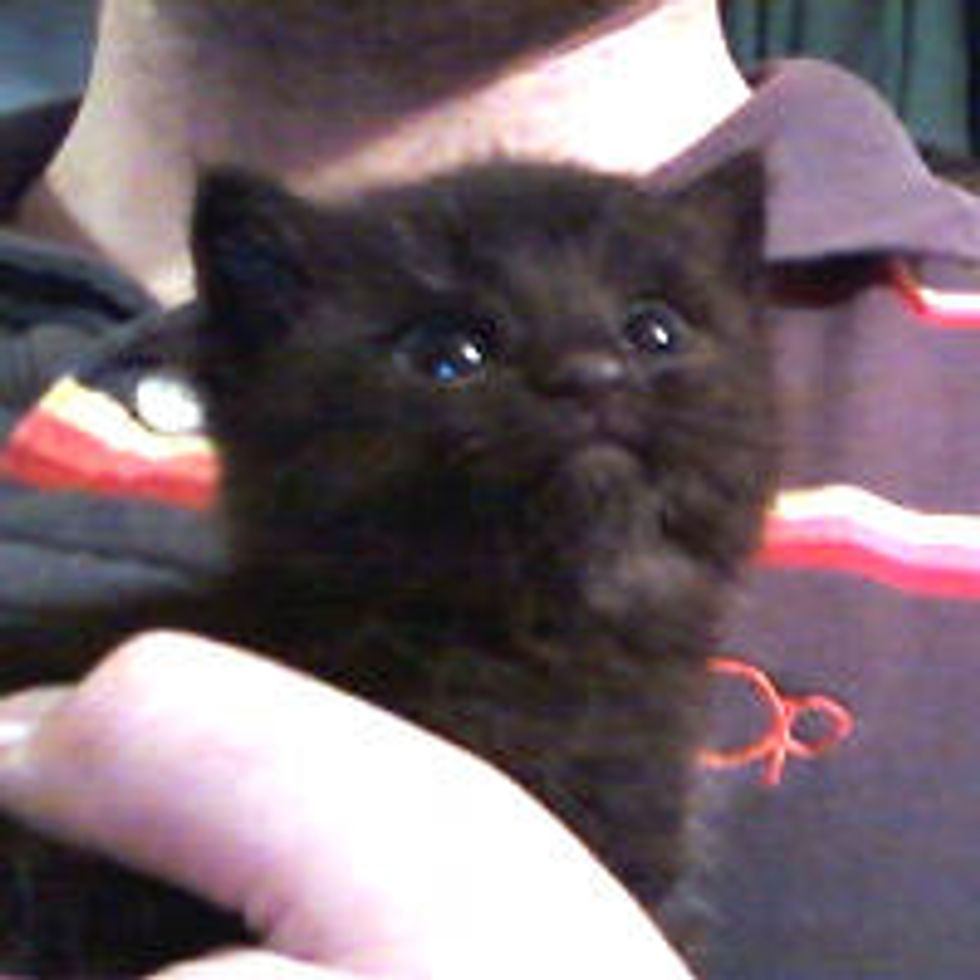 A black tiny kitten found a second chance at life around Halloween last year. No one was there to claim her until a kind man and his family who took her home, nursed her and turned her into a beautiful lady cat that she is today. She stole his human dad's heart and made him a cat convert for life.

We found her right around Halloween last year in a ditch while visiting in-laws. It's a really rural area, no one lives near them. She was underweight, unusually small, and meowing loudly. Good thing too or, we probably wouldn't have noticed her. She really looked like she wouldn't make it through the night, and even if she had, there are so many free roaming hunting dogs around there... From the pic you can sorta tell how small she really was, she could just sit in the palm of your hand. My guess is she was left behind. From what I understand, its not unusual for mother cats to abandon kittens they don't expect to survive. Anyways, we scooped her up and gave her a bath, she was pretty muddy and flea infested, a few ticks. We listed her in the paper for a week as a found kitten, but as expected no one claimed her (actually we thought it was a "him" at the time, OLIVER, named for the orphan in "Oliver and Company," became OLIVE after a trip to the vet).

The veterinary office also found out for us that she had a really bad case of ear mites as well. That's such a sad thing to treat on new kitten. She really freaked whenever we gave her the medicated ear drops. By the time we were ready to head back toward the city, she had warmed up to us a lot and I to her as well. I had never been a cat owner in my life up to that point, nor had I ever had to bottle feed anything. I'll admit I was "a dog person," but I was soon amazed by the intricacies of her mannerisms, the way her eyes truly sparkled of intelligence, how articulated her paws were...and then... that sweet little motor boat purr. Deal Sealed. Olive was going to be ours from now on. I never ever expected nearly the same thing to happen again about a half year later. That's where Otto (Otto's story) came in...

When Olive was rescued...

Olive from a cute little furball to a proper lady cat

Photos by Fu3l via Reddit. More on Olive and Otto.