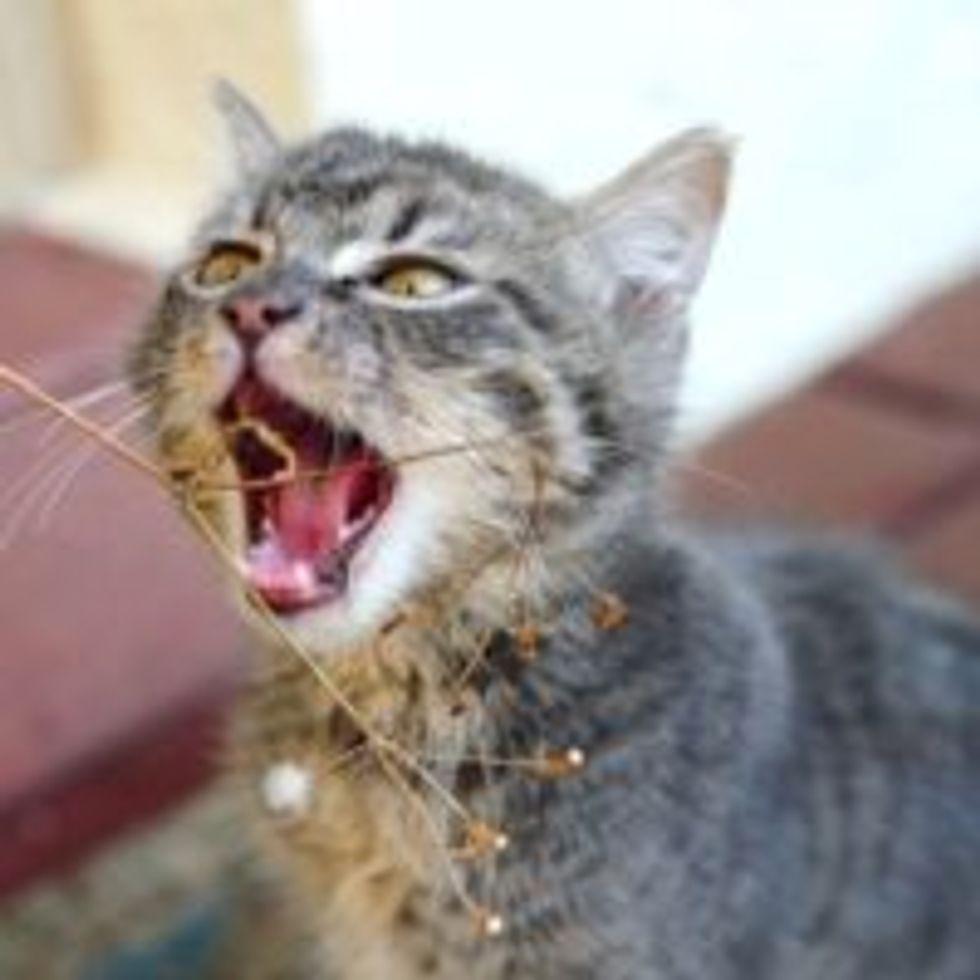 A very friendly cat named Matty came from the streets. He was a bit different. He could barely walk and couldn't see, but he could hear just fine. The little guy didn't come with a clean bill of health. In fact, he was so sick that even the vet doubted that he could make it. Stacey T. C. from Good Karma Pet Rescue, decided to give him a chance.

Got an email in mid-September looking for placement for a kitten found on the streets. This was the description: "He is super friendly.  He follows my brother around.  At first he walked like a drunk, but he's walking better now.  I imagine it's just from being malnourished.  My brother is working in an office building, and the kitten follows him, and when he sits at his desk, the kitten sits on his feet.  He's super alert too.  My brother, Brian, wants to wash the poor little thing's face, but he's allergic, so he's trying not to handle him too much.  The little thing has latched onto him though, allergic or not."

We had a foster home with a spot open, so we said why not? The foster mom called right away saying something was definitely wrong with him so she brought him to me the next morning to take to the vet. When I met him I was quite sad. The poor guy couldn’t walk.. when he tried he would flop around a lot on his wrists. He was skinny. Stinky. But OH SO SWEET. Purr, purrrr, purrrrrrrr.

The vet said the kitten likely had vestibular disease and was most likely blind as well. Vestibular disease in adults is something they often recover from in a few weeks. In kittens, it is often caused by a virus contracted while in the womb and the chance of recovery is not good. His bladder was full enough that he didn't appear to be urinating on his own. She said euthanasia is not a bad option. When I asked if I could take him home, she said that recovery was unlikely but that, "Miracles do happen, if you have the patience and time to help him."

I figured that he had made it as far as he did (3 mos or so old even though he was grossly underweight), and I did in fact have some time and patience on my hands, so why not take him home and see how he does? After all, the poor guy was super sweet and seemed happy enough judging by the purring. They taught me how to express the kitten’s bladder and he came home. I got the impression he was probably doing worse when he came to me than he had been earlier because at first he wasn’t really eating or going potty or able to walk at all even though I had been told he walked when he was first found. He mostly just flopped around. It was really sad. Some days he would eat, other days I fed him with a syringe and did fluids for a few days too. Watching him eat when he started eating on his own was almost more sad – he just flung his face in the food and then jerked back with a mouthful, getting it all over him and everywhere around him. Every day I had to feel bad when I helped him go pee because he really didn’t want to.

Then one day he went pee on his potty pad, so I gave him a low-lipped litterbox and.. he used it! He pooped in it too.

I would take him out to the driveway to practice his walking:

After a bunch of flopping, how amazing is it to see him running around like that? This was a very happy day.

So then he moved to a big bathroom where he continued to do well. And he is so darn cute. He may not be able to see, but he can hear – when you walk in and say his name he comes running for you, and oh my does he have a cute little run!

He went to a foster home that is keeping him at least for the weekend. She is the one that first met him and was so happy to see how much weight he’s put on and how much better he’s doing. She is going to be giving him lots of love and attention this weekend, so we couldn’t be happier for Matty who will be soaking it all up! Thank you for being a great foster mom, Cory.

So, little Matty has come a long way. He is still quite clumsy, especially on slippery floors. He makes a mess when he eats, scattering the food. When he hops out of the litterbox, sometimes litter falls out with him. He can’t see, so he isn’t keen on big dogs sniffing him too much or too roughly. But man, this Matty kitty is one of the sweetest I have ever met. He purrs like an engine when you hold him. He likes to snuggle with people in bed. When you enter the room and he hears your steps or your voice, he runs towards you because he loves you. My husband, who originally said Matty should be euthanized when he saw how helpess he was, is now very glad that we chose to give him a chance — because he deserves it.

His foster mom Cory reports his new favorite thing is to play with the broom when she's trying to sweep, then scatter the dust.. Ha! And to think when he first came to the rescue he could barely walk. What a little miracle boy!