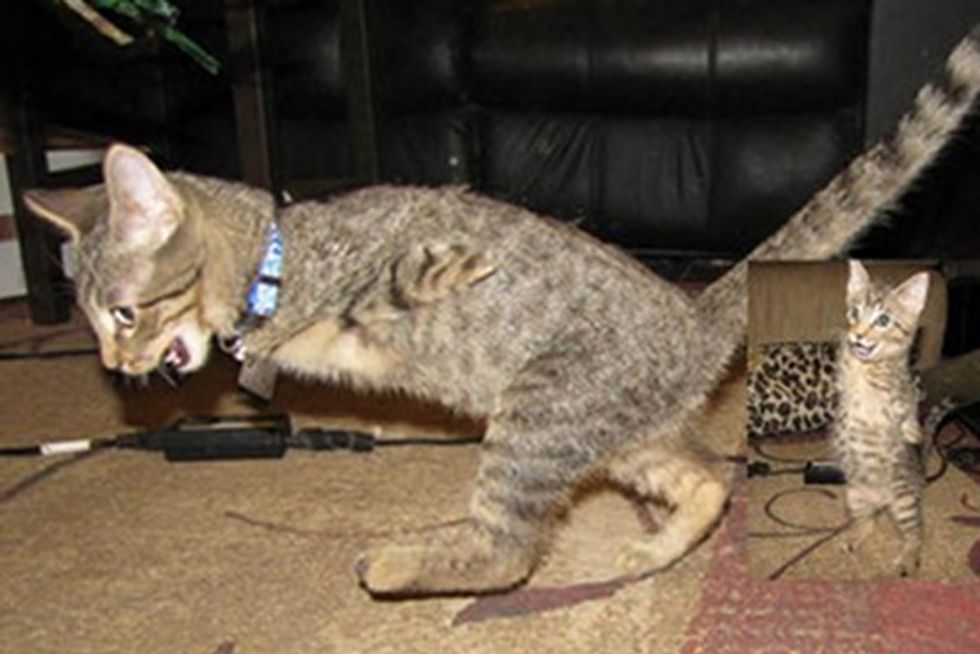 Mercury The Kitten Has No Front Legs But Absolutely Loves Life

Meet Mercury, an amazing kitten with no front legs, but absolutely loves life. Not only can he get around like a pro, but also do everything just like other cats.

"Mercury was found when he was about 4 days old (just over 5 ounces in weight, and eyes still shut, born about September 3rd/4th 2013), and we believe he was hit with a weed whacker since people in the neighbourhood had been doing yard work in tall grass shortly before he was found. He was taken to our vet, his wounds were cleaned up, and we were then called to care for him since we do a lot of bottle babies and special needs kitties for rescues. We fed him around the clock, and cleaned his wounds multiple times a day until they fully closed over... He grew well, and from the very start he would move on his own.

As he has grown we worked on different aspects of movement with him- pushing himself with his back legs, balancing in an upright position, jumping from various positions, moving on different surfaces, jumping from one place to another and so on. The more he grew, the better he got at each one, and he can now run on most surfaces, climb stairs, jump on to and off the couch, and balance better than almost any other cat. Mercury does everything other cats do- he plays with toys, he jumps, plays with other cats and dogs, sleeps on the bed, uses a litter box, and believes he is the king of the world...

Mercury absolutely loves life, and has the most inquisitive personality. If he sees something outside he runs to the window to watch, if a new toy or scratching post is brought in he is the first to run over and check it out, he has the biggest purr when he is being petted, and if he doesn't like something or you aren't doing what he wants he will yell at you until he gets his way."

Meet Mercury the kitten who has no front legs but is happy and gets around like a pro. He absolutely loves life.

They found him when he was just 4 days old. He was most likely injured in the yard.

But that doesn't stop him. Mercury has learned to use his hind legs to move, run and jump. He can play and do everything just like other cats.

He thinks he is the king of the world!

Mercury has the most inquisitive personality.

"If you're happy and you know it, stomp your feet!"

Mercury showing off his cute belly :).

WATCH VIDEO: Here is Mercury taking on the laser.