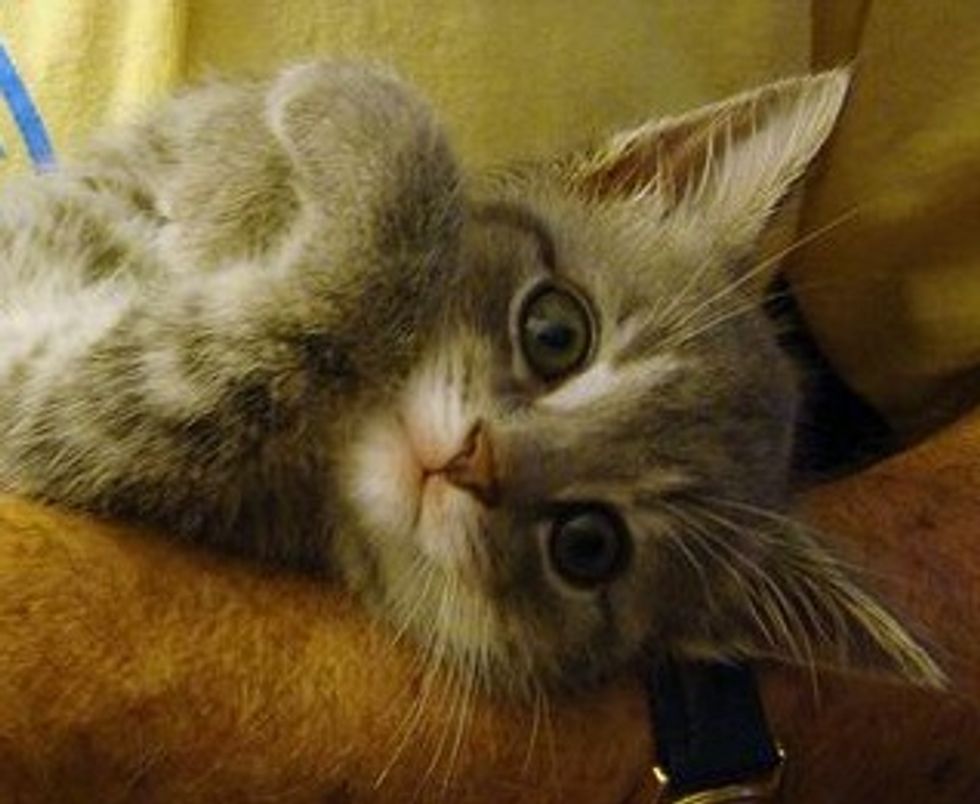 We brought Millie home on May 17, 2010. After I retired from teaching, I worked for 6 years at the local library. A group of those I worked with go to lunch monthly and one of those coworkers, our friend Heide, showed up at the May luncheon with photos of five orphaned kittens. Heide has always been active in finding homes for kitties (she has five of her own) and asked if any of those at the luncheon that day could provide a home to one or more of these adorable little cats. The next day we went to see the kittens. We were immediately drawn to a little gray one who reminded us of our dear Margo who died in 2005. Margo was a gray "dilute tabby" and it appeared that this was also the color of this new little girl. She has a distinct "M" on her forehead (more so than most tabbies) so we decided to call her "Millie."

We brought Millie home on May 17 and were concerned about the sort of reception Millie would get from Gracie, our beautiful 3-year-old kitty. We were careful to keep them isolated from each other as much as possible until Millie had been to the vet for a check-up. In fact, we kept the two cats isolated from each other for two weeks. During that time, they became aware of each other's presence, got familiar with the occasional glimpse of each other, each other's scent, etc.

Gracie is a large and very much in-control cat so we feared what the first close encounter with Millie would involve. Apparently, the two-week period of isolation from each other was just what was needed because Gracie was not at all hostile toward her "new baby sister." There was a predictable amount of sniffing and exploring and occasional hissing. Soon, the two cats seemed quite comfortable with each other and they both had full run of the house. Millie, being a kitten, is full of energy and always wants to play. Gracie tolerates this up to a point, but Millie does pester and annoy Gracie to the point where Gracie will swat (and hiss) at Millie. We are hoping that as Millie grows older, she will calm down so that she and Gracie will become true friends.

Millie is hilarious to watch at times. She will pounce upon, dart at, bat at, chew upon, climb up, etc. anything she comes across. There are periods of "zooming" where she seems jet-propelled racing around the house and bouncing off the furniture. Eventually, she will tire and settle down and sleep soundly on either of our laps. Even though she is well past the age when she would be suckling, she insists on suckling the area between the thumb and index finger. She goes into her "hyper-purr" mode, kneads as she suckles, and seems to be in kitty cat heaven.

Millie is now four months old and in a couple of weeks, she will be spayed. Before too long she will be grown up and we'll miss those kittenish behaviors that have amused (and sometimes aggravated) us.

We think we've found a great little kitty and look forward to many more years with Millie and Gracie. Keep watching Flickr for pictures of this dynamic duo; we do take lots of photos of our kitties.