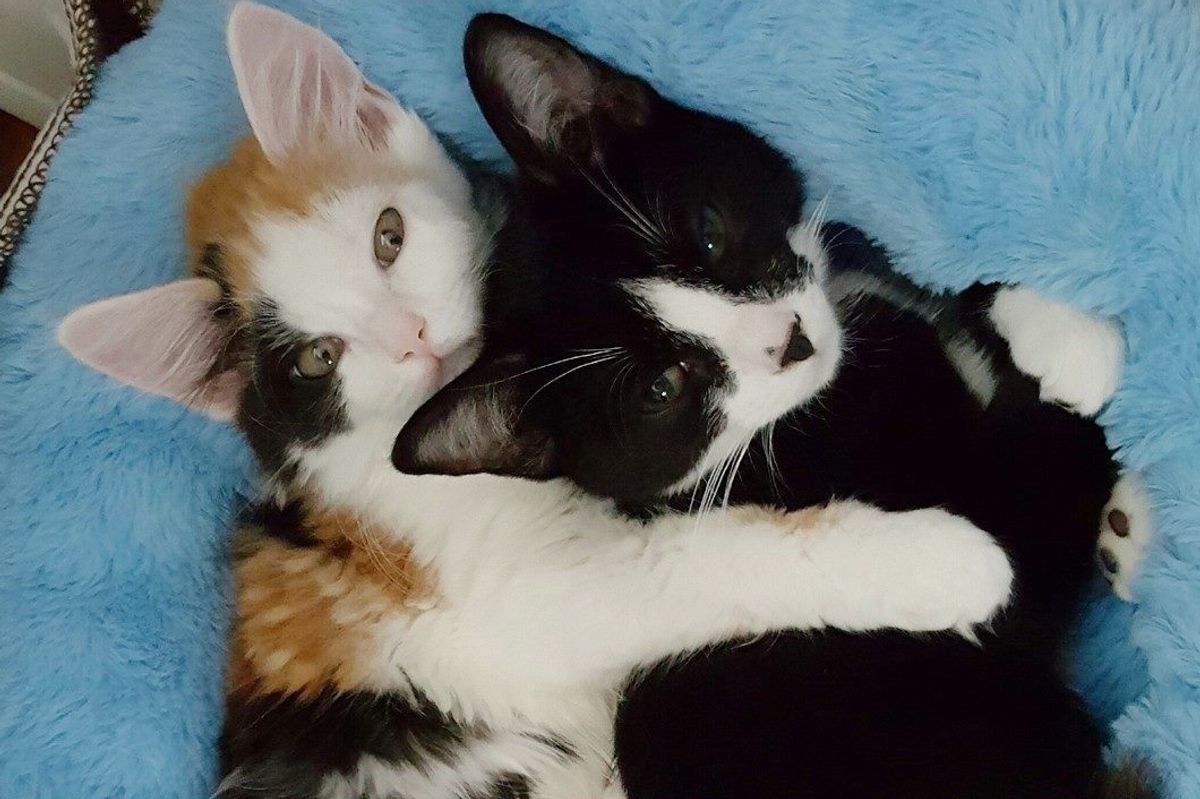 Paralyzed Cat Takes to Another Special Kitty Just Like Her and Won't Let Go...

A cat who is paralyzed in her hind quarters, found a furry friend who is just like her. The two formed an incredible bond.

Trey was just five weeks old when she was spotted outside by herself, dragging her legs in a woman's yard.

"We are not sure what happened to her legs... it could have happened in the womb or an injury outside," Karla Weller-Barkley, founder of Keller's Kats told Love Meow.

The kitten would not have survived on her own in the outdoors. The kind woman scooped her up and searched for help. Karla who runs a volunteer-based cat rescue (Keller's Kats in Walworth, New York) was asked to help the motherless kitten, and she immediately agreed.

"Trey is an inspiration for so many… nothing stops her! If I had to pick one word for her personality--vibrant! She is also driven, loves attention and purrs the moment you pick he up. She loves to just run around."

In August, 2016, Trey met a tuxedo kitty who is also paralyzed in the rear. Her name is Delilah, and they instantly bonded.

"Delilah came into the shelter with no use of her back legs just like Trey. The vet at the shelter felt very optimistic so he took her home and has spent a month working with her and she has shown some progress," Karla said.

"I thought Trey would enjoy having a friend so we have welcomed Delilah," Karla told Love Meow.

Little did she know that a beautiful friendship was about to blossom. Trey immediately took to Delilah and fell in love with her little sister from another mother.

The two best friends are completely inseparable. They bring each other so much joy.

"(One night) I came home and couldn't find Trey. I thought to myself there is no way she escaped the enclosure. I looked around, called her name, and out of the corner of my eye I see the pad move in her enclosure. I guess a game of hide and seek was the game of choice that night," Karla said.

The sweet calico girl is a cuddler. Ever since Delilah came to Keller's Kats, they haven't stopped cuddling.

Karla rescued another special needs cat named Spirit, who has Cerebellar Hypoplasia. The two best friends took her in with open arms and showered her with snuggles and purrs.

"I just love watching these girls interact. They play, sleep, and clean each other. Trey knows Spirit struggles to get around and will clean her after she makes it back to her bed then Delilah does the same for Trey."

There's something so special about these kitties. They require some extra care and TLC, but they return love back tenfold.

When Trey found Delilah, she showed her the same love that she received when she was rescued. Then they met Spirit, the two best friends took turns to look after her like one big family. These beautiful creatures can somehow sense each other's needs and offer love and comfort without condition.

The litter box has been fun with Trey... Delilah decides to join the fun!