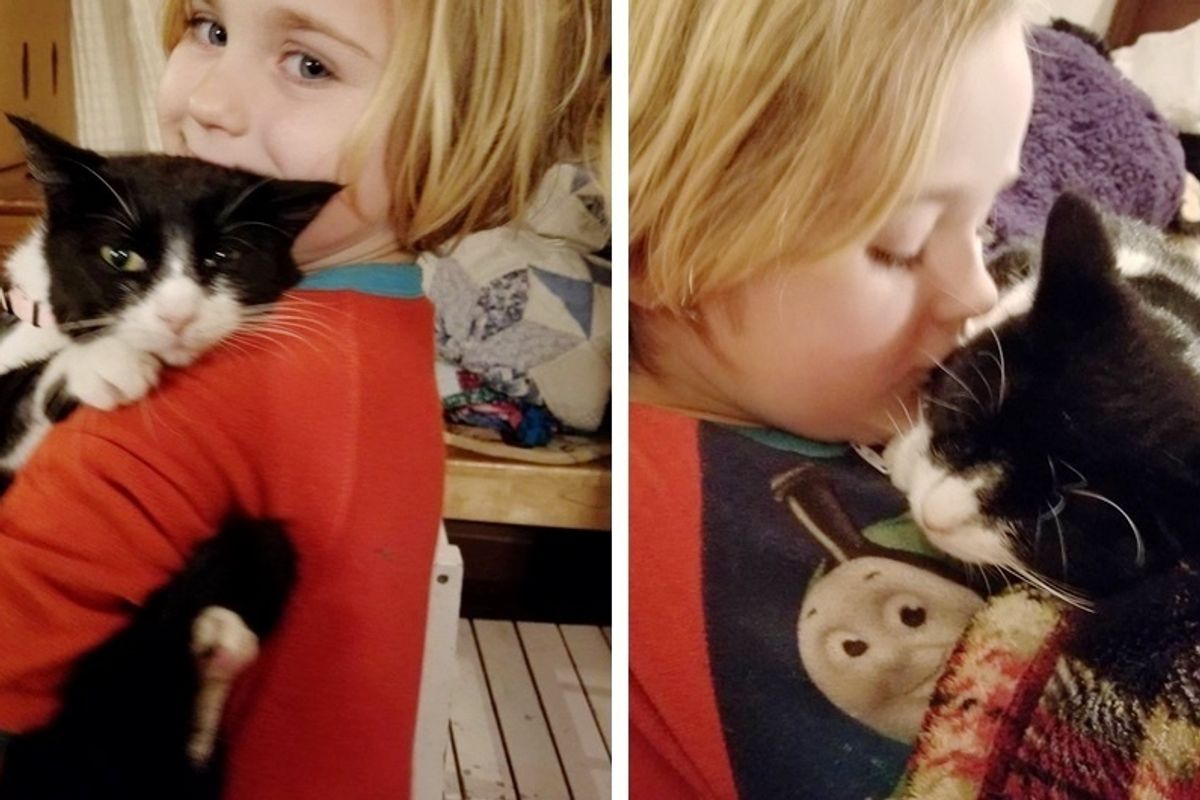 A frightened rescue kitten came to her foster home with only fear in her eyes, but a young girl made it her mission to help the kitty find love.

Emmy and Baja the cat

Baja is one of the three kittens rescued by Kitten Angels in Mayfield, New York. April took in the trio along with their surrogate mom, a feral cat named Luna. They were extremely terrified of people. "These siblings were scared, mistrustful of humans, and nervous - but they didn't try to scratch or bite at all," April told Love Meow.

After a few hours of quiet socializing in a basket, some gentle pets, and tasty treats, they saw a slight change in the kittens' demeanor. Though still very scared, they were starting to learn to trust and accept some loving snuggles.

Emmy's mother is specialized in taming feral or "unhandable" cats and helping them adjust to a comfortable indoor life. Emmy has grown up with all kinds of critters and animals. At a very young age, she started helping her mother foster kittens and care for animals in need.

"Emmy is wonderful with all kinds of animals, and can comfort the crankiest rooster, has full grown boar pigs roll on their back for her scratches, and can bring the most terrified kitties out of their shells," April told Love Meow.

Baja was very scared until Emmy was near. The kitten began to relax when her little human friend gave her attention, love and cuddles.

"Baja was the first to really warm up to Emmy. They just clicked. The complete trust she has when she is with my daughter is something that even I did not anticipate."

April has tamed many very feral cats over 20 years, but the bond between Baja and Emmy is something out of the ordinary.

"Baja lets Emmy scoop her up. She falls asleep in Emmy's arms. Her first purrs were for Emmy's snuggles. This all began last night. It was a 180 degree turn-around in only a few hours," April told Love Meow.

"Emmy insisted that the scared kitty needed her to snuggle her while she watched her movie. Baja even found Emmy's little chifferobe as a hidey spot when we left the house for a bit this morning."

The sweet tuxedo has gone from a terrified kitty to a complete cuddlebug.

"She is so comfortable now, sweet Baja is definitely not a wild cat any longer!"

"This girl is well on her way to accepting that humans are to be loved - NOT feared."

Related story: Man Gave Kitten a Home and The Kitty Replaced His Personal Space With Cuddles