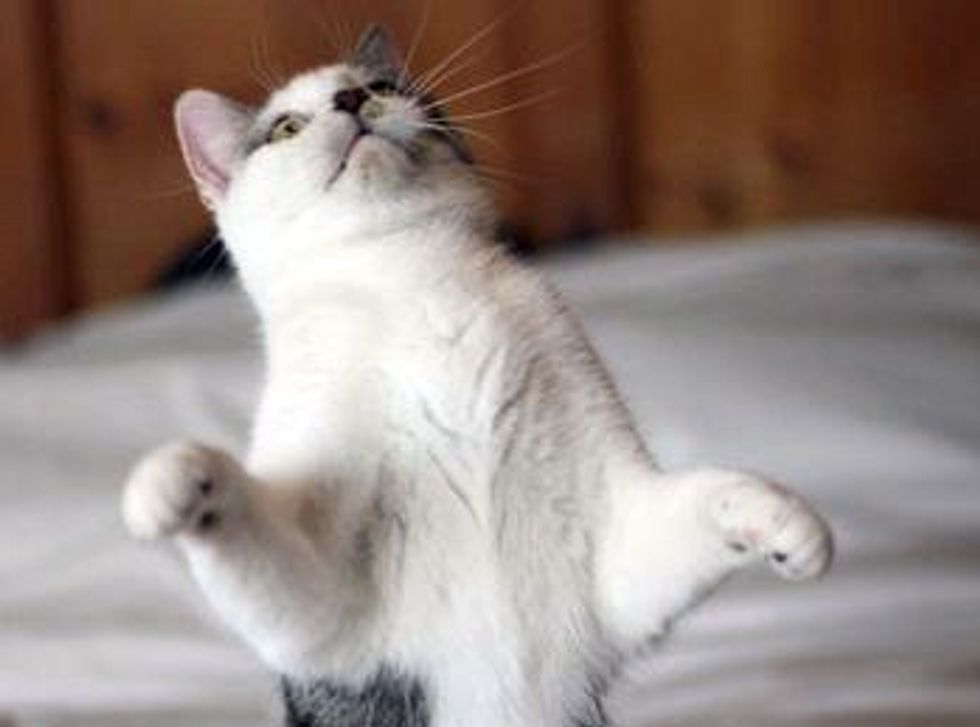 Rescue Story of Curiosity the Cat

Curiosity is a fabulous boy that I am currently fostering. The kids named him Curiosity because he followed them around everywhere. He still has that bend to his personality, and is persistently curious no matter how many times we tell him he can't climb into the fridge whenever we open it. Curiosity was dumped on my friends' farm. He is one of the last dumped kittens to need homes.

My friend kept telling me that he would make a perfect nursing home cat or lap warmer for some elderly couple. Maybe he'll get that opportunity some day.

Curiosity has a gentle nature and is convinced he belongs inside the house (he must have been an inside kitten before he was dumped). A while back, during a church bonfire, Curiosity planted himself on the lap of a young man in a wheelchair. He stayed on his lap as long as the boy remained at the bonfire.

Then, what perhaps won me over, was a few weeks ago. We had a meal at the farm with visiting missionaries. At some point, some child left the front door open. Well, in wandered Curiosity. He came straight over to the table and looked for a lap to hop up on. He tugged at my heartstrings right away. . . then he tugged even harder after we gathered in the living room. I locked eyes with a pleading Curiosity. He so much wanted to be inside with us.

Cooler weather has arrived, and Curiosity's health could easily get worse without care. He came with an incredibly nasty upper respiratory infection. The Convenia shot didn't work for him. I wanted to do twice daily oral medicine. It just made sense to have Curiosity stay at our place until we could find him a forever home. We'll nurture him to health, and his natural charm should win someone over.

Curiosity has been on three different antibiotics so far, took the last dose of his current course today. He'll probably be on the lysine for months if not years. The nasal discharge has been minimal enough that I have comfortably let him interact with my crew of six cats plus one other foster. Curiosity is so even-natured that the transition has been quite easy. My goal is to get this boy healthy enough to find him a forever home somewhere. He is certainly welcome to stay at our place until someone sees him for the treasure he truly is.

Curiosity is the perfect example of why people who have a certain personality in mind should adopt an adult cat. He will bring a great deal of joy to someone's home some day (as he already has to ours). By the way, he is feeling much better and certainly much more energetic now that he no longer has a rip-roaring infection. Yes, he spends time sitting on laps and cuddling, but he also runs, jumps, and plays like a kitten these days. Making up for old times, I guess!

Cat Transforms Completely After Years Living Outside, Finally Has What He's Been Searching for