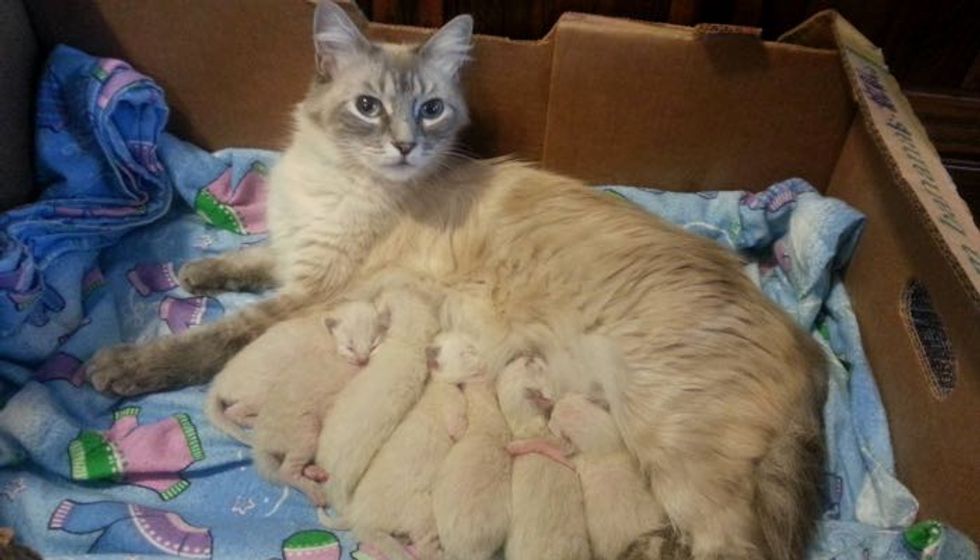 They brought home a stray cat, two months later she gave them seven little surprises. In just eight weeks, they went from no cats to eight kitties that all look alike.

A kind woman rescued a stray cat from the street, thinking she would be adding one additional member to their family, but little did she know, the kitty didn't come alone.

"We brought this girl in off the street in mid-March. She was dirty, cold, skinny and hungry. We named her Myrtle and she decided she was cool with ruling over us," Myrtle's human mom wrote via imgur.

"She made herself at home pretty quickly. We didn't mind. We hadn't had a pet since our 10-year-old cat, Baby."

"On May 22, while I was home sick from work, Myrtle went into labor on my bed. Next to me. While I was napping. I woke up to the first kitten being birthed. In the next few hours, she gave birth to seven total kittens."

Seven little kittens all of the same color!

Myrtle and her babies at four days old.

The kitties got their own bed and their curiosity grew by the day!

Proud mama watching over her babies at one month old!

When the fur babies nap, they cuddle in a puddle.

"I got quite used to coming home from work to find a little pile of fluff."

They are getting so big and running out of room at the milking station!

When one kitty discovered the laundry, they all joined in the fun!

The family of eight have all found their forever homes. Mama cat Myrtle and one of her babies were adopted by their rescuers.