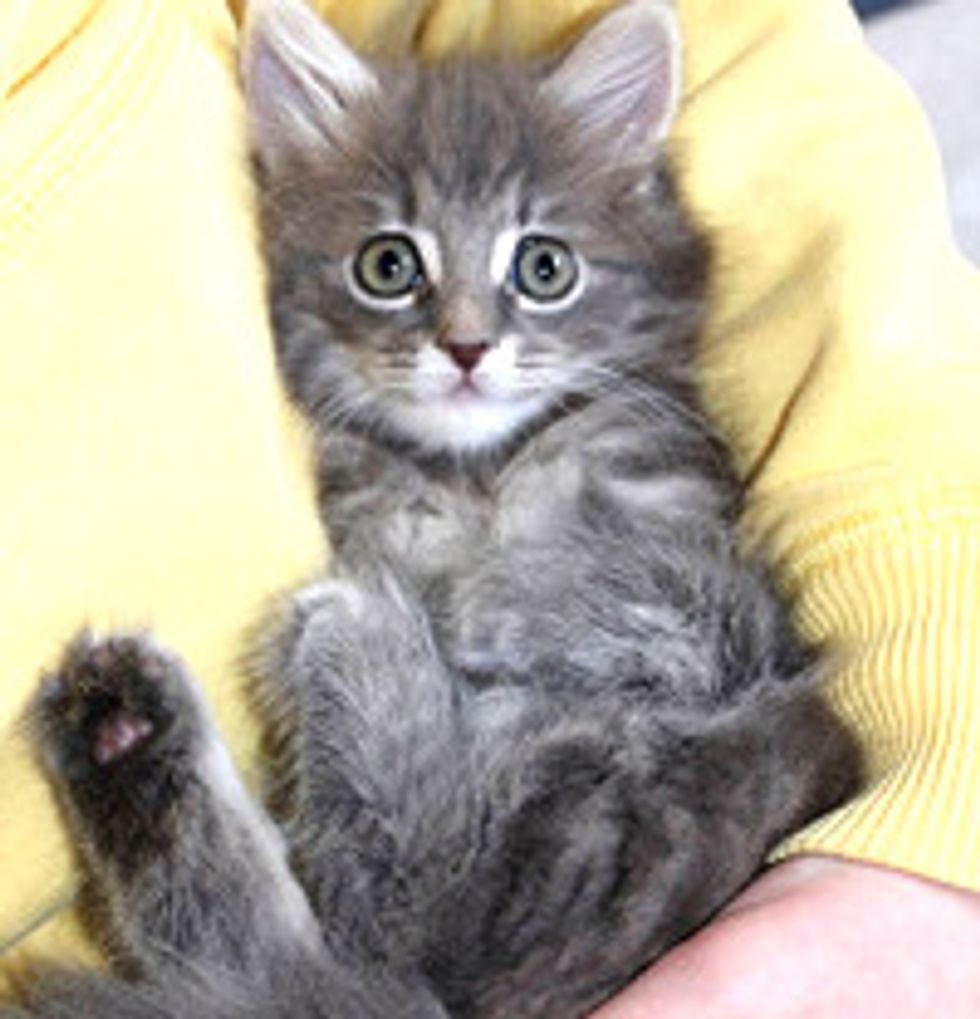 Squitten The Kitten! Born With No Bones In Front Paws, Walks & Sits Like A Squirrel

Petal the kitten has been nicknamed Squitten - the squirrel kitten - because she was born with no bones in her front paws, so when she walks or sits, she does it on her hind legs just like a squirrel. [Watch videos below]

Petal waddles when she plays and gets around. She is like Harvey the cat who was also born without bones in his front legs.

Squitten's cat momma was taken to Yorkshire Cat Rescue in Keighley, West Yorkshire, where she gave birth to three kittens, but only Petal made it.

When she was nine weeks old, she was diagnosed with deformity, which means she would need medical treatment in the future.

"We could see from a very early age that there was a problem, she would try and run around and when she stopped she would sit up like a squirrel. We nicknamed her 'Squitten' because she looks like a squirrel as it sits back on its hind legs and eats a nut. We took her to the vets and they said to massage her legs until she was old enough for an X-ray but there was no improvement. When she was about eight or nine weeks old we took her for a scan where we found out she had Radial hypoplasia," Sara Atkinson, founder of Yorkshire Cat Rescue said (Daily Mail).

"Some people think cats who have deformities need to be put down but this isn't the case, we wanted her to have a comfortable and happy life and she now does," she added.

The rescue group started searching for a good home that would be able to provide the special needs for the little squirrel kitty. Kerry Bowler, who was working in a veterinary practice when she found Honey the cat who has a similar condition as Petal, offered to adopt her.

"She is getting on really well and both her and Honey have become firm friends and have regular check ups to monitor them and make sure there are no health complications," said Kerry.

Squitten has a condition that makes her different, but she knows deep down that she's a perfect and happy kitty who can do a lot of things just like other cats as long as she's given a chance and a family that loves her unconditionally. Now she has both and more.

Petal aka Squitten, the squirrel kitten, was born without bones in her front paws

Squitten is given a chance to live a normal and happy life and have a family that loves her unconditionally.

Squitten aka Petal at her new home