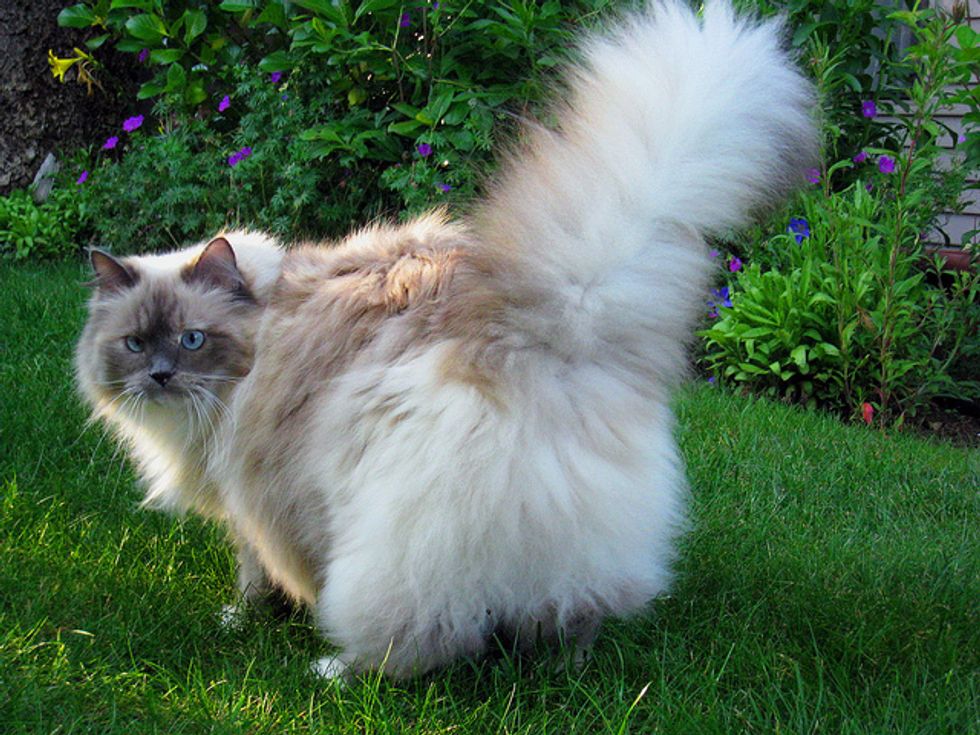 Story of Lacey the Fluffy Rescue

I had two female lilac point Siamese cats for many years. They lived to ages 18 and 17. After they passed, I was lost. I missed them so much. But five years went by, and I started to have a longing to have another cat. I started going to the local SPCA and saw how many cats/kittens needed homes! One day, I saw a picture of Lacey at the shelter's online site, and right away I wanted to go see her. I called the shelter and I found out she was at a volunteer's home, being looked after as she had been found wandering the streets, starving and pregnant. She had lost her litter of kittens I was told. Lacey had just been spayed so was recuperating from that surgery. I phoned the volunteer and made an appointment to see Lacey later that day.

As soon as I saw Lacey, I knew she would come home with me. She was very shy, was hiding under this lady's bed, and finally was coaxed to come out. After a few minutes she relaxed around us, and I told this lady how much I would love to give Lacey a good home. Lacey came home with us in the shelter's box, but she didn't like being in it, while I was driving; so my daughter let her out of the box, and she walked around the back seat, came into the front seat, and luckily my daughter could hold her while I drove. Arriving at home, my daughter held Lacey while we got out of the car, and Lacey's eyes were huge, looking around everywhere, wondering no doubt what was happening to her. We brought her inside, and was she one happy cat. She explored everywhere, made herself right at home, and was purring madly whenever we petted her.

I had been told that Lacey was approximately one year old then; so she had a lot of kitten-like qualities, being very curious and very playful. It turns out she was a total purr machine. You just looked at her and she purred! It made us feel so good to have given her a home where she would be loved forever.

Lacey is now in her sixth year, and has given us so much joy and happy times over the years. She loves to play in the backyard with me. There are lots to interest her there, like squirrels coming by, birds of course in the trees, and bugs. She loves to jump up at any flying bug. She'll chase anything, a long plant stem, a string, a branch off of a shrub... She goes crazy chasing things and will jump high into the air at times after them. She'll catch the string or rope I sometimes use for her to chase, and when she catches it, she runs away, dragging it behind her. It's so funny.

Lacey has flourished under our care; she has brought us so much happiness with her happy, playful, friendly personality. Life is so much better since she's been with us, for her and for us! I recommend to everyone that if they want a pet, get one from a rescue shelter and give it a good life!