Good Samaritan Saves Stray Cat Using a Dumpling, the Cat Decides to Have Kittens the Day After

An elusive stray cat who had been roaming the streets for quite some time, finally accepted help when someone offered her a dumpling. 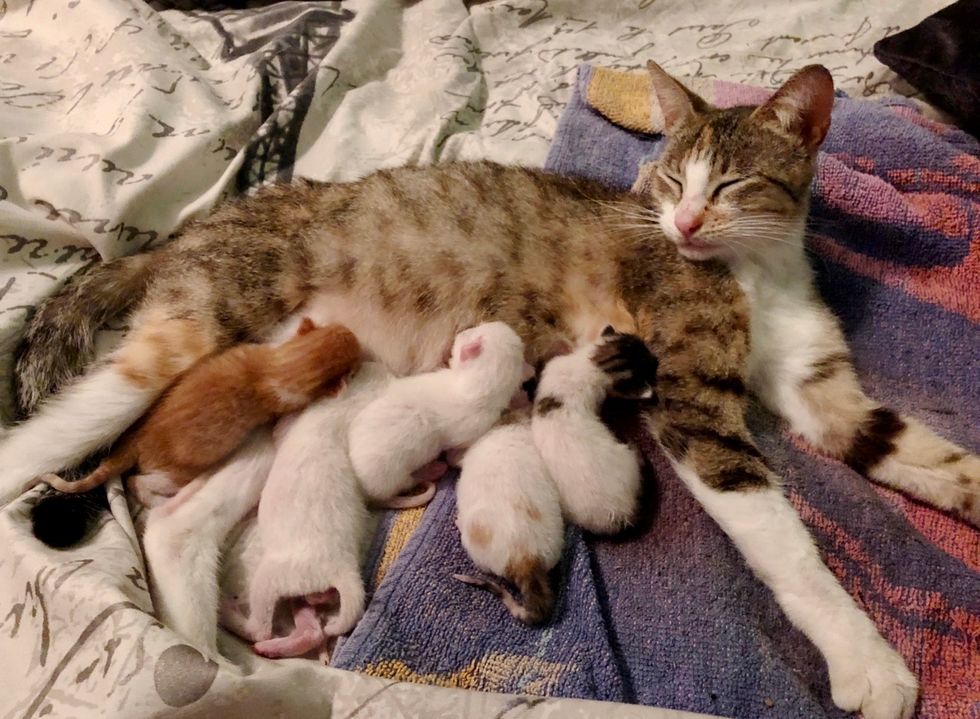 A few weeks ago, a stray cat was spotted wandering a local shopping center. Several TNR (trap-neuter-return) rescuers responded and set out humane traps in the area but only to find that the savvy and elusive feline evaded them all.

She was later seen crossing the highway to go back and forth between several restaurants looking for scraps of food. A Good Samaritan who had seen her picture on social media, eventually found her and was able to coax her into a cat carrier with a dumpling. The tabby was too hungry to resist the food and finally accepted help.

Coastal Bend Cat Rescue, a local rescue in Corpus Christi, Texas, took her into their care, but little did they know she didn't come alone. 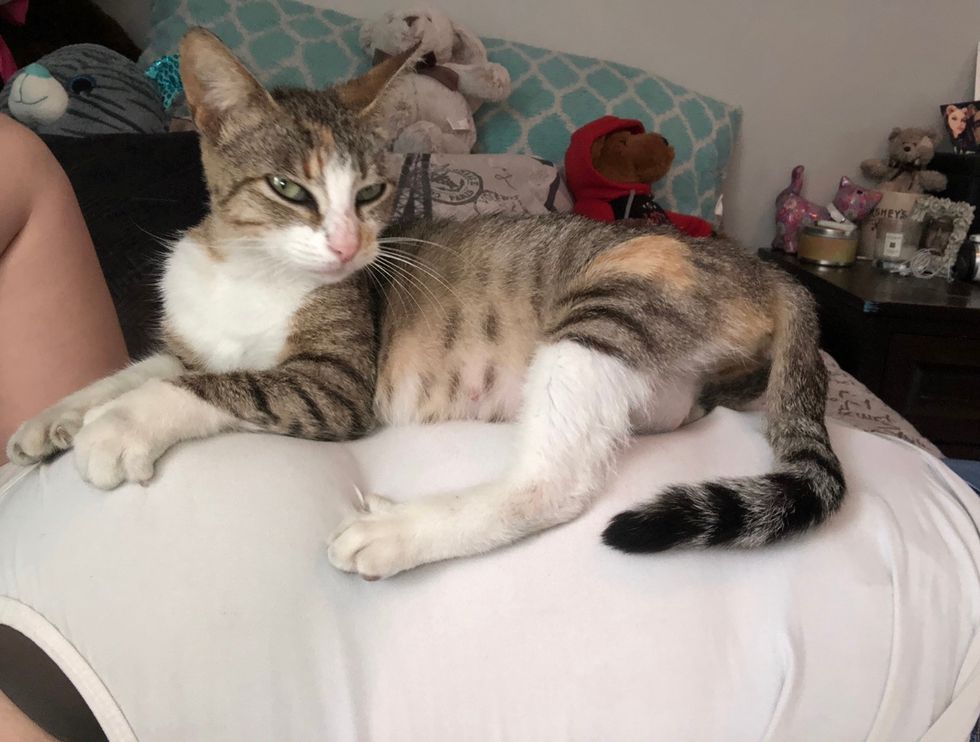 "Within 48 hours, Dumpling (as she was soon named) decided to surprise us by popping out some baby dumplings. She was such a young and petite cat herself, weighing only six pounds," Lindsay Haglund, Foster Coordinator of Coastal Bend Cat Rescue, told Love Meow.

"It was very clear that it was her first pregnancy as a very young mother. She went into labor and had five little babies (four eventually survived) on top of a comfy queen sized bed in her foster home."

The cat mom was so exhausted that she needed help with the delivery and to clean the babies. 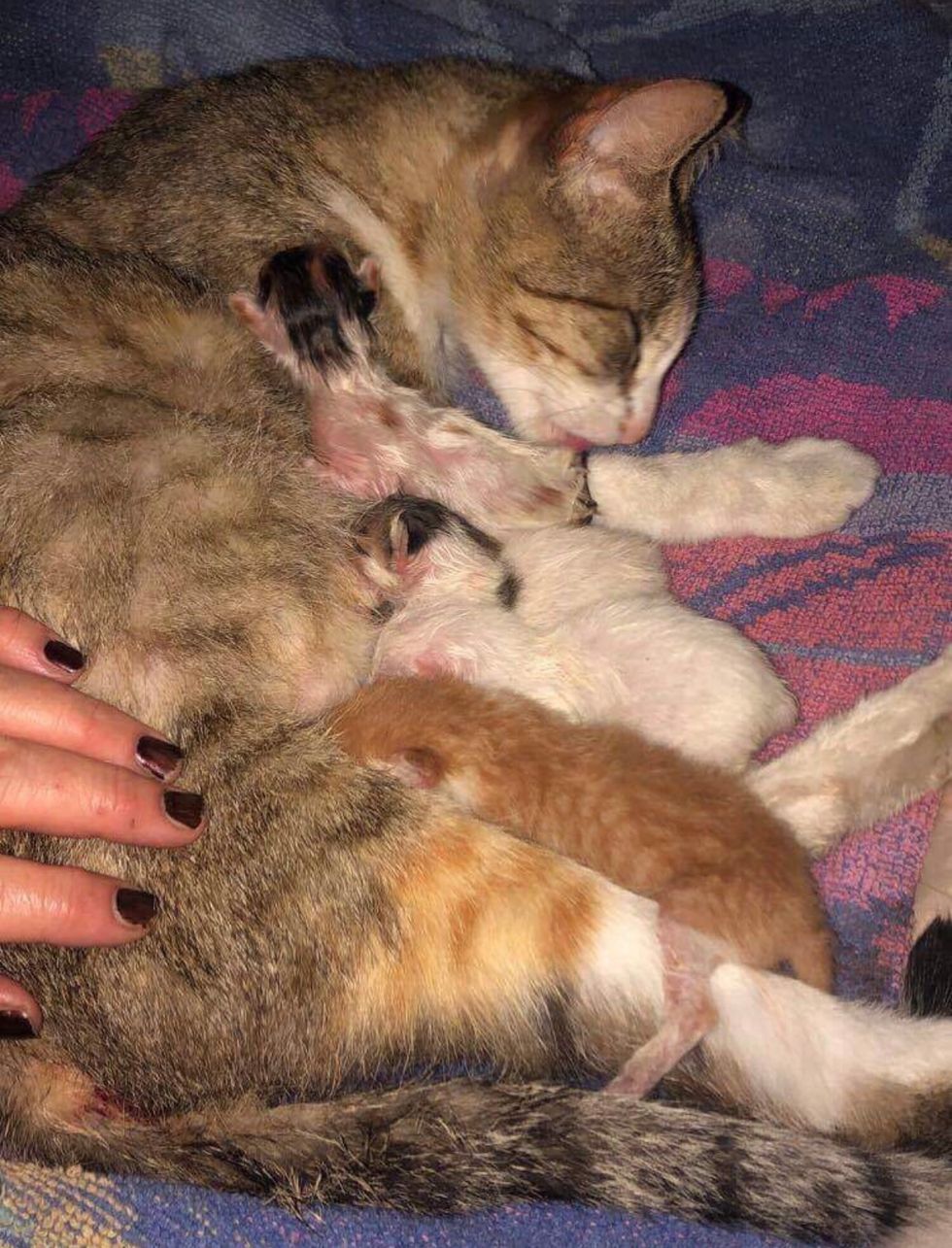 "Dumpling's foster family saved the lives of her kittens, and probably even Mama Dumpling herself that day," Lindsay said.

A few weeks later, they were faced with yet another challenge when Mama Dumpling started having trouble nursing her kittens. 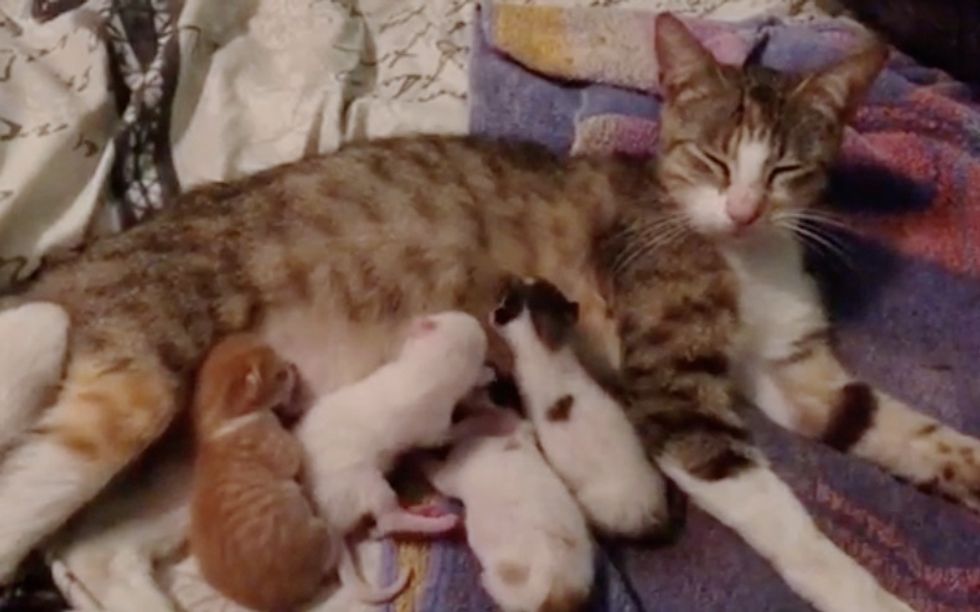 "She developed a severe case of mastitis after giving birth. This is where the mama's milk ducts get infected and inflamed, and nursing causes severe pain. The infection is very serious and can be passed on to little kittens as well," Lindsay told Love Meow.

"Under veterinary guidance, we separated the babies from their mama and bottle fed them to give Dumpling some recovery and healing time."

But being away from the kittens was unbearable to the cat mom. She would cry nonstop just to be close to them. "We knew we needed to come up with a way to keep mama and babies together without the risk of babies trying to nurse." 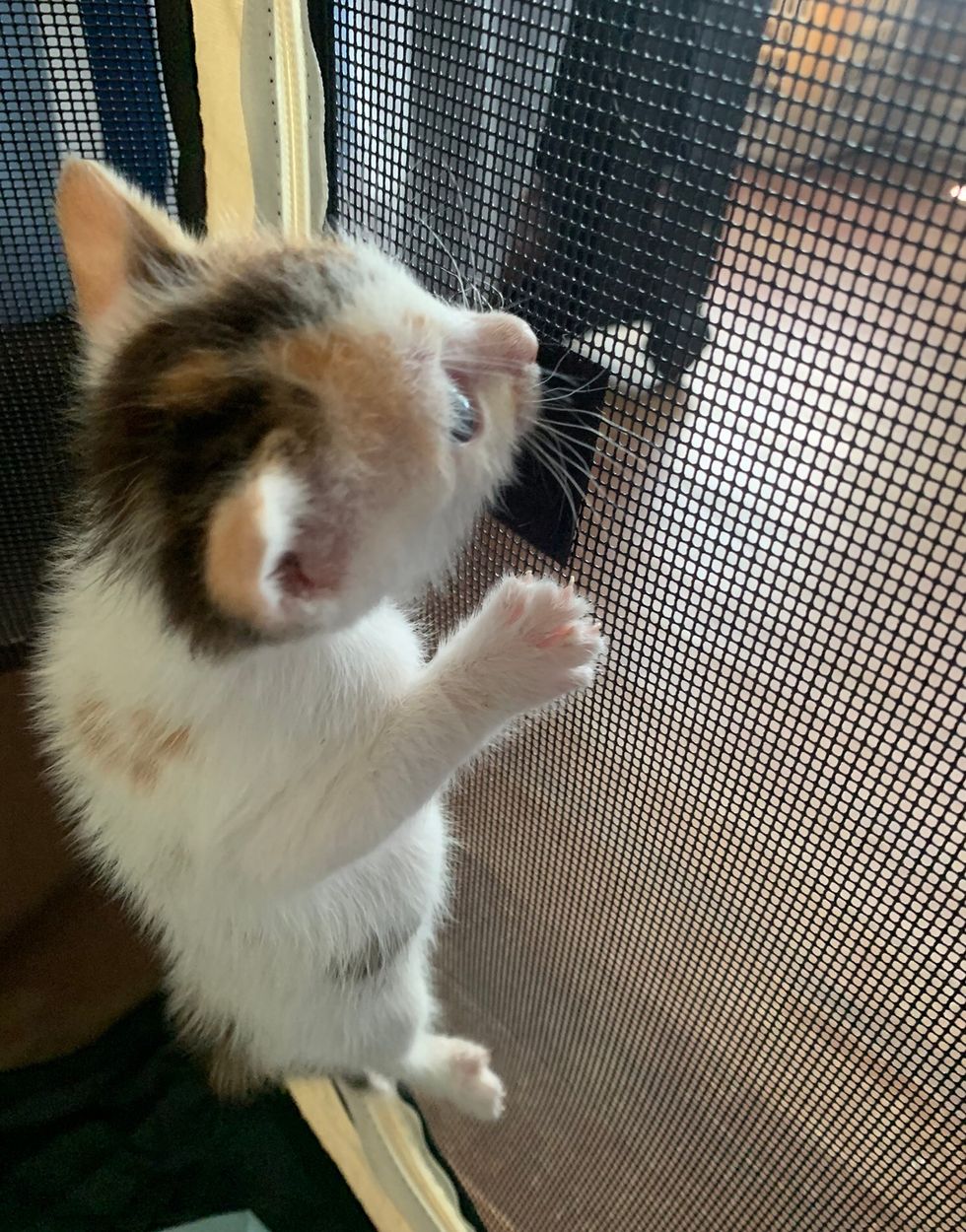 "The foster family bought her a medical onesie outfit which she wears so she can cuddle and love on her babies. This also gives Mama the opportunity to provide much-needed socialization."

Mama Dumpling is as happy as can be when she is doting on her kittens. "She's truly the best mama!" 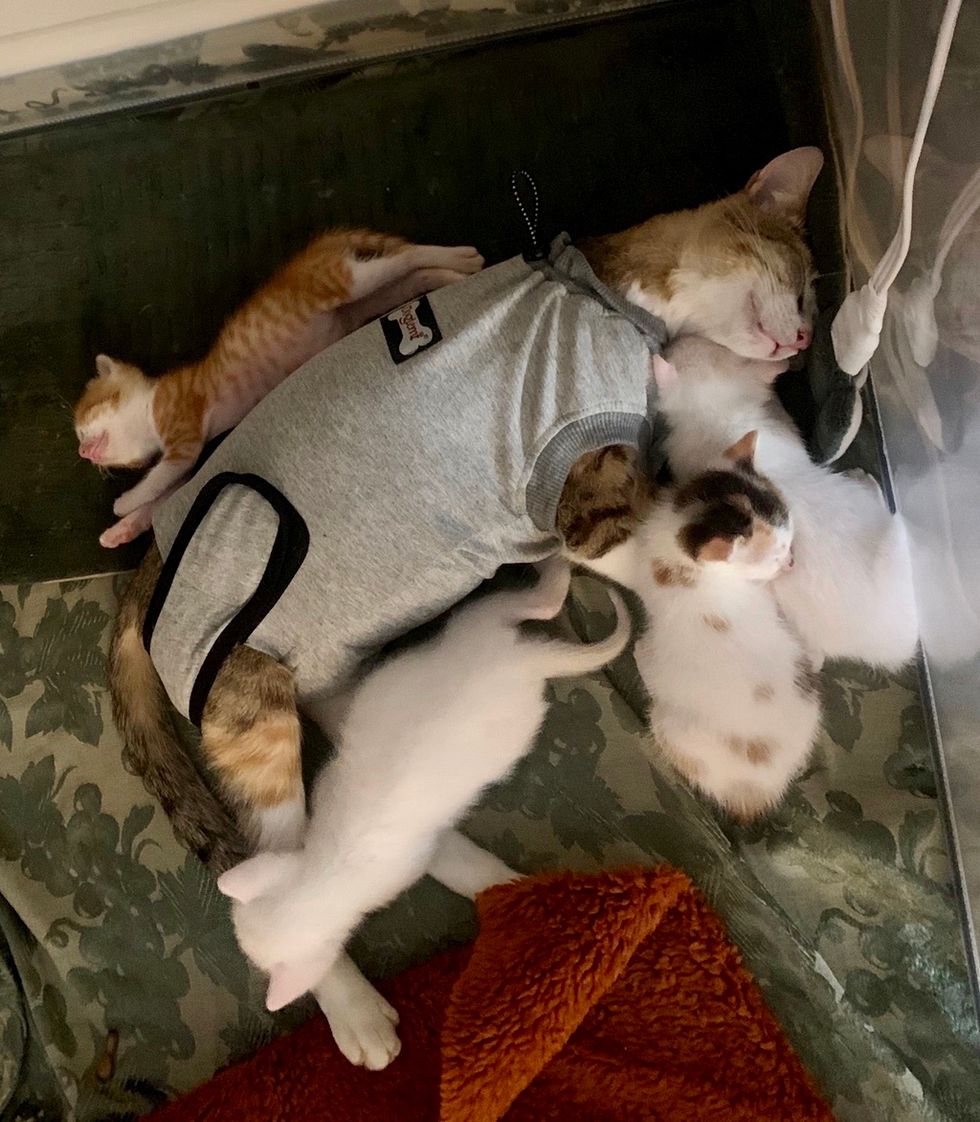 The rescue group advocates for Spay and Neuter in an effort to end the cycle. "Female cats as young as four months old can go into heat and get pregnant, and the pregnancy, birth and delivery of kittens is traumatic on their little bodies. With improper nourishment from living on the streets, it's just a recipe for disaster," Lindsay told Love Meow.

"Mama Dumpling was one of the lucky ones." 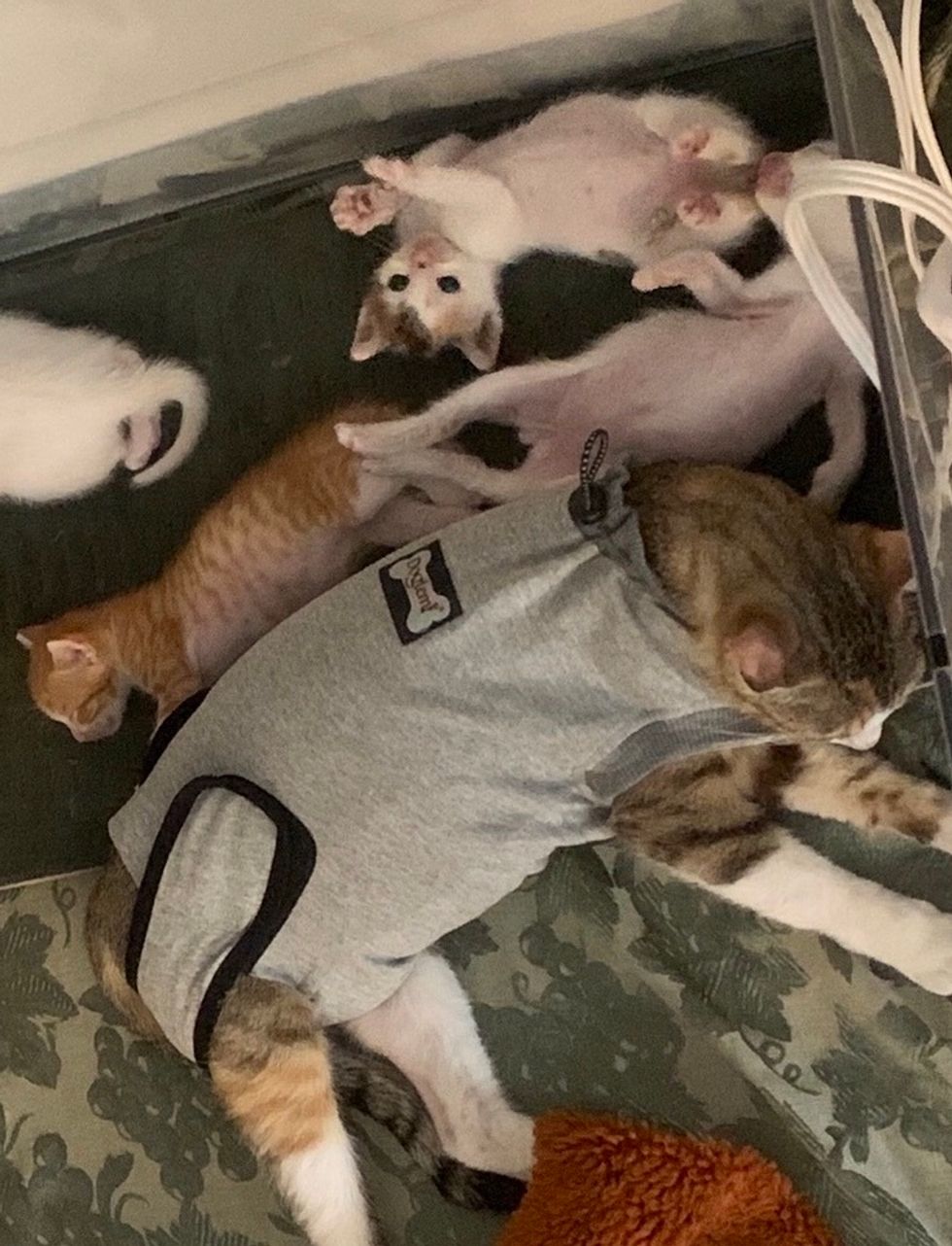 "The dumpling family is thriving in foster care and the kittens are a little over five weeks old. Once everyone makes weight they will be spayed and neutered and put up for adoption."