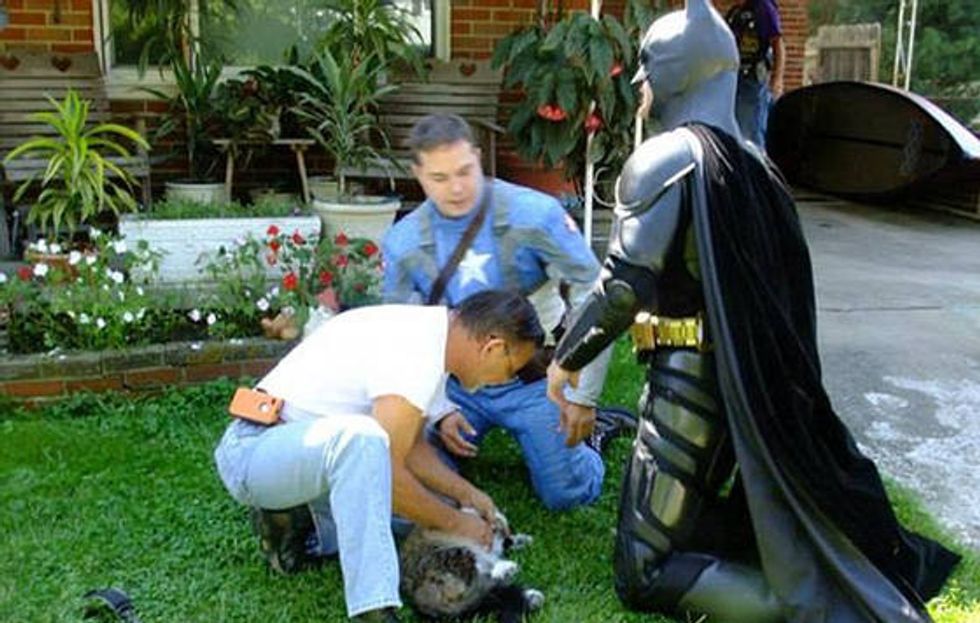 Two men dressed as Batman and Captain America saved a cat from a burning house in West Virginia last Saturday.

John Buckland and Troy Marcum were working at a children's event where they teach kids positive values when they saw smoke engulfing a home.

In true superhero fashion, they sprang into action, rushing towards the burning house to see if anyone was inside, and that's when they found a cat whose owners were not at home at the time.

"I grabbed his shoulders, gave it everything we got and the door opened," Buckland told WCHS.

Buckland, a former firefighter and Iraq veteran, said his training kicked in. "He (Captain America) breaks out the window. The smoke lets out and as I can start to see I reach down and grab something furry." He got the kitty out to safety.

The cat appeared to be unconscious, so they began rescue efforts on the cat.

"He got resuscitated by Batman. That’s a pretty scary thing to wake up to," Buckland joked.

Buckland said not to let the costume fool you, he's no hero. "I just wonder what the cat was thinking. I'm glad no one was inside."

They were at a children's event, teaching kids positive values when they saw smoke engulfing a residential home. They rushed to the house to check if there was anyone inside.

That's when Buckland the Batman found the cat. He got the kitty outside and began the rescue efforts. 'He got rescucitated by Batman. That's a pretty scary thing to wake up to,' he said.